"When the world is ruled by violence, and the souls of mankind fades, the children's paths shall be darkened by the shadows of the Neon Maniacs."

Ah, the 80's. The time when you could have your villains named after neon! Neon Maniacs, aka Evil Dead Warriors is a 1986

The movie opens with a harbourman (I think) by the Golden Gate Bridge, who find a goat skull containing playing cards showing monsters. As soon as he looks through them, he is axed to death. After the pink neon title and opening credits (scored to goofy muzak), teen Natalie (Leilani Sarelle) and her friends are driving around the night city, celebrating Natalie's birthday.

They party (and some screw) in the woods, until the Neon Maniacs attack and kill them all except for Natalie. She locks herself in the group's van, and the Maniacs attack until they suddenly disappear. Natalie is found by the police and taken in for questioning.

Natalie describes what happened to the chain-smoking cops, and is sent home. She goes home (alone-her parents are out of the country for a holiday) and relaxes by a pool, and unbeknowenst to her, one of the Neon Maniacs is behind her. She manages to accidentally avoid him, and while she rests on a floating thingie, blood suddenly starts raining from the sky...and she wakes up-it was all a dream. 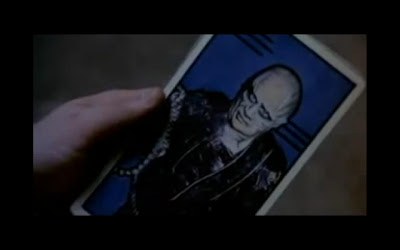 The next morning, the police are at the scene of the crime, and see no bodies or blood, but find copious amounts of a mysterious substance-a neon slime (insert Vice Squad joke here). Meanwhile, two kids, Paula (Donna Locke) and Gary (Chuck Hemingway), both horror geeks, talk to each-other over the phone. Gary, the son of a cop, tells Paula that the previous night, a 'girl said she and her friends were attacked by monsters', and that 'the girl's' friends have all vanished. Later, Natalie goes to school (and acts pretty chipper for someone who's just lost nearly ten friends by death in one night) and Paula tries to talk to her, but is rebuffed by one of Natalie's friends. 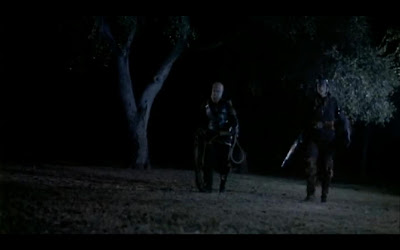 While in the cafateria, Natalie is attacked by the sister of one of her dead friends, and is helped out by Steven (Clyde [credited as Alan] Hayes), a teen who has a crush on Natalie. Natalie is sent home by the school, and the film cts to Paula and Gary, who are shooting an amateur horror movie. Later, Paula tries to contact Natalie, but is hung up on. Also calling Natalie is the parents of one of the dead/missing teens. 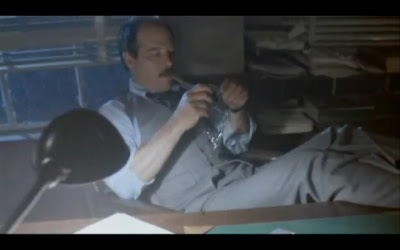 Paula goes investigating at the park, and Steven (stuck on his brother's grocery delivery route) goes to Natalie's house and talks with her, saying that he believes Natalie's account of what happened. Meanwhile, Paula follows the neon slime ("Fading to black, the streets come alive, that big city monster just opened his eyes!") to the Golden Gate bridge, where she finds several dead pigeons. Before she can investigate further, a cop finds her and tells her to go home. 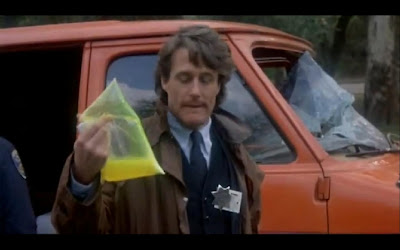 After the Neon Maniacs come and kill the cop, Paula goes back to the mysterious building where the slime is coming from. She sees the Maniacs emerging from the building and film them on her camera. One of them trips and falls into a puddle of water and partially melts. Despite one seeing her, all of the Maniacs retreat back into the building when it starts raining. Paula goes back home and puts the camera's tape into her double tv, VHS, editing getup (how the hell much would that have costed? This girl must have hitmen for parents!). Unfortunately, the film is ruined and isn't showing anything. 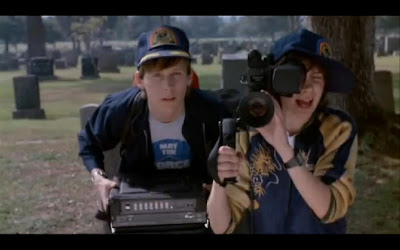 The melted Maniac goes to Paula's house and tries to kill her, but she's armed with several water weapons and she completely destroys it. She goes over to Natalie's house and tells her and Steven about her encounters with the Maniacs and what their weakness is. 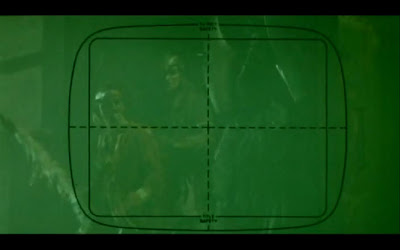 The trio decide to use the upcoming Battle of the Bands to their advantage, and when the event starts, everyone there-all in costume-have water pistols (having been told that they're for something else). Meanwhile, the Neon Maniacs have come out to play, and they've got their own army...

Neon Maniacs is awesome! It's a cool low-budget horror flick, full of great effects, good acting, and fun scenes, from the subway scene, to the attack on the Battle of the Bands! 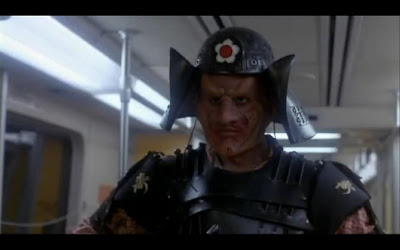 The Neon Maniacs themselves are cool! They're like the Village People of demon-monsters-one's a cop, one's an American indian, one's a samurai, one's a caveman, one's a soldier, and one's a one eyed, one horned people eater (that is neither purple, nor does it fly) etc.. Not only do the look cool, and kick a lot of ass, but they don't give a damn about anything-they don't care about not being seen, and they'll attack in populated places! 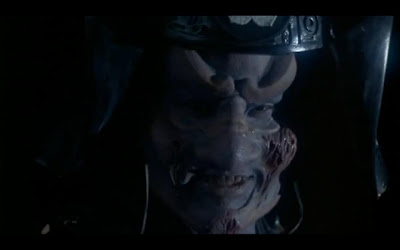 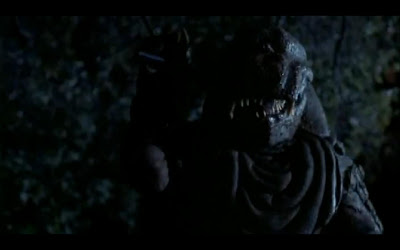 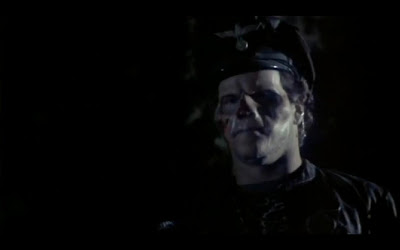 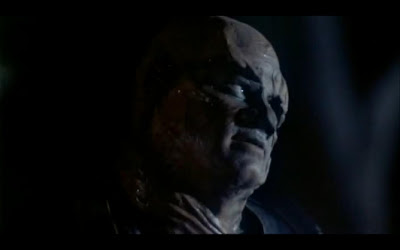 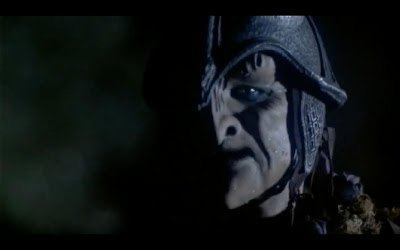 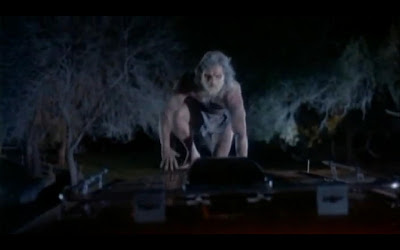 There is one huge problem with Neon Maniacs though-the ending! There isn't one! The cops all converge on the Golden Gate Bridge base on the grudgingly followed advice of Natalie, Steven and Paula. The cops are armed with water pistols, thermos' and fire trucks...and they find nothing. Then as the cops leave, the commissioner guy goes back in the building and opens the doors to a truck, and inside is where the Neon Maniacs come from. He's killed and dragged in, then the three teens are driving away, and Steven asks them if they've stll got their water pistols. "Yes," they reply. THE END! That's it! 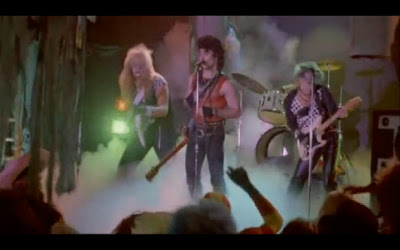 Other than those big problems, this is a movie that fans of cheesy 80's horror definitely need to watch!
Posted by Chris Hewson at 4:24 AM