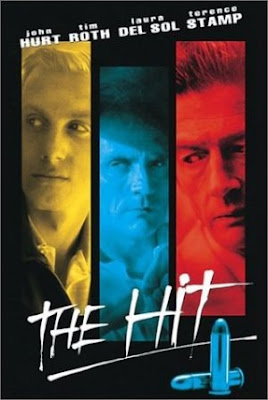 I said in my Murder by Death review that it, Family Plot, and The Hit were the very first films I saw as a proper film fan. I remember The Hit being especially great! As a kid, there was a clamshell VHS of 1984 Stephen Frears British crime flick The Hit in my house, that was given to the family as a present, and was watched by nobody. Years later, I finally decided to get around to watching this movie that I'd been extremely curious about for quite some time...But my VCR was temporarily mute for a considerable number of months, so that idea was nixed. But then, months later, I came across a DVD of The Hit, and I watched it, and thought it great!

Just like with Murder by Death, I forgot I owned The Hit for a number of years, and only remembered about it a few days ago. Except unlike Murder by Death, which was as funny as I remembered it, I didn't enjoy The Hit this time round in the slightest!...

The Hit is about Willie Parker (Terence Stamp), a mobster who ratted out his fellow crims, and got them all arrested. Ten years later, and one of said convicted criminals, Corrigan, has been released, and he sends a hitman, Braddock (John Hurt) to kidnap Parker.

Willie Parker has been in witness protection for the last decade, in Spain, and he lives a peaceful life, until he's kidnapped by Braddock and his young Protege Myron (Tim Roth), who have been instructed to take Willie to Paris, to Corrigan, where they'll execute him. 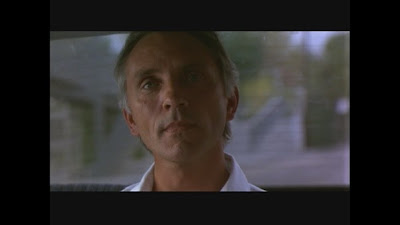 As the ride across the Spanish countryside goes on, Braddock and Myron are unnerved by Parker, who's very calm and collected about his fate. As police are slowly on their trail, the hitmen go to a safehouse, where an old 'friend' of Braddock's, Harry (Bill Hunter) is living, with his Spanish lady friend 'Maggie' (Laura del Sol). 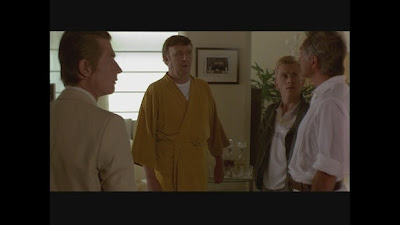 After Willie says his name to Harry, Braddock decides he can't trust his 'friend', and takes Maggie along as leverage, but goes back up and kills Harry anyway (due to Willie subtly egging him on to do it. Yeah, it sure doesn't make sense why good-guy Willie would pretty much sign an innocent man's death sentence. Dick! ).

With a new passenger in tow, who Braddock has decided to keep alive (for reasons that elude the screenwriter), the police move closer and closer onto the trail of the menacing hitman... 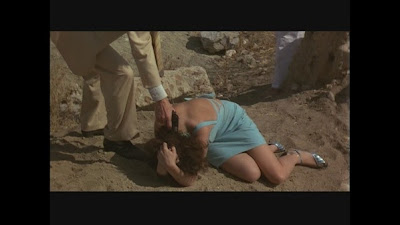 The plot of The Hit isn't very good. The film is never boring, and it is tense in some scenes (mainly just on the first viewing), but it's never great either. The characterisation isn't particularly good (it probably could have been improved if said characters were expanded on more), the ending as a whole makes ZERO sense, and as for the character of Willie Parker...Grr! By the time that Willie starts talking about how he doesn't fear death in the slightest, it's already nearly an hour into the damn film! Until that point, he just seemed like a cocky guy with an ace up his sleeve. And when he does start sharing his philosophy on death, it comes across as disingenuous (except in his scene with Braddock near the end), thanks to the writing. Willie says that what happens to us after death isn't all that much diffferent to what happens before we're born, therefore there's no reason to worry about dying. That's a pretty weak and illogical argument! Plus, even after that, it never seems like Willie is at peace with death. He's always leading Myron on with talk about how Braddock's 'slipping', and stuff like that. And given the ending, this really isn't the unique film everyone says it is! People say that The Hit is original because the main character is willingly going along with hitmen, and is calm at the prospect of his death, but that isn't the case at all! 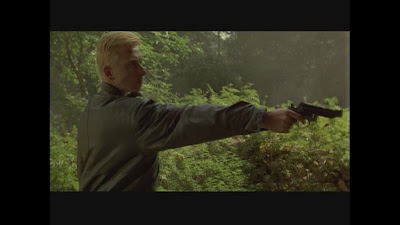 The acting ranges from fine, to nothing. Terence Stamp is good, and the highlight for him is his speech to Braddock near the end of the movie. Tim Roth is fine in one of hs first ever acting parts, and Laura del Sol rarely talks, but she at least does emote, unlike John Hurt. I can't tell if Hurt's performance is lacklustre, or the role was. Braddock never reacts to anything, doesn't talk much, always talks in the same tone, and is just plain dull! There's a fine line between cold, emotionless killer, and sleepwalking through a performance.

As for Fernando Rey, EASIEST PAYCHECK IN HIS ENTIRE CAREER! He has has no dialogue until the end (an even then, he only has two lines), has only two minutes of screentime at most, and most of it is spent surveying crime scenes! Why was a big-name actor like Fernando Rey needed for a nothing role like this? Did he just need a payment off his car or something? 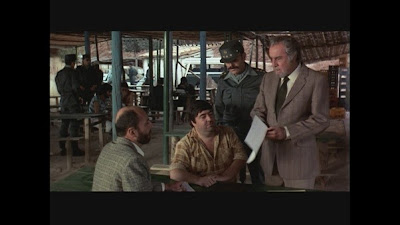 The main theme is alright, but the rest of the score is pretty uneven. Sometimes the flamenco music score fits well, other times it doesn't, and other times it gets way too over-the-top.

One thing that's great in The Hit is the sometimes-beautiful Spanish scenery!

So, in closing, I thought I would be able to recommend The Hit, but I don't, at all. Go watch a better British crime movie instead, Like Lock Stock, and Two Smoking Barrels, or Harry Brown. Or if you're looking for something specifically about two hitmen, and their emotional journeys, watch In Bruges!...
Posted by Chris Hewson at 8:51 AM