With 24 novels and over 20 movies to his name, Tarzan has always been a figure I've been afraid to dip my toe into, due to the sheer amount of material. Much in the same way how Bollywood has always made me nervous, with its huge libraries, and common 3 hour runtimes. In the last week however I finally made my first step, reading the original book from 1912. I've gotta say, it's really good!

Tarzan of the Apes is a thrilling adventure tale with a fast pace, many tense and emotional scenes, and an interesting story. The dialogue may feel a bit weird sometimes (certain characters talk like philosophical robots), but the book really nails non-verbal narration. Many books that are largely told to us might run the risk of =/failing, but this succeeds. The characters are an interesting bunch, with Tarzan being the best. While conventionally uncivilised, he's very intelligent, and you can really see this as the book goes on. 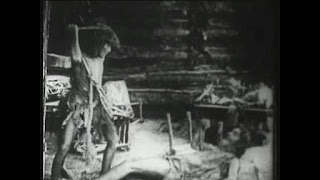 The way the book handles race is also admirable for such a time! It explicitly details the horrors of the European colonists plundering the continent of its resources, killing and driving away the locals, even naming and shaming Belgium and its mad king! The book has many diverse black characters, from the sympathetic mutineer, to comedy relief maid Esmeralda (she's a darling!), the hostile tribespeople, and more. Going into this book I was afraid it'd be really dated, but not at all. It surprised me with how progressive it was, with the crowning moment coming near the end, when Tarzan learns a valuable lesson.

Overall, it's a book I thoroughly recommend. It delivers exactly what you'd hope and expect when you hear the name Tarzan. Does the debut film from 6 years later do the same though?... 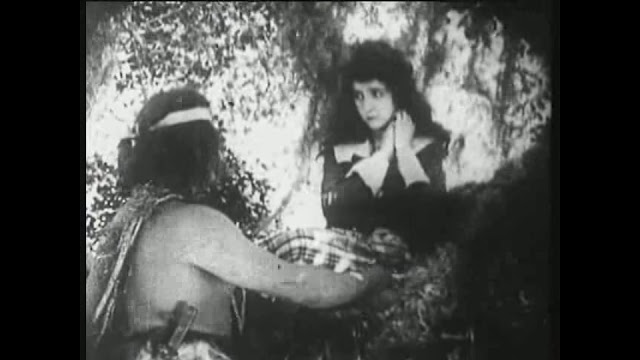 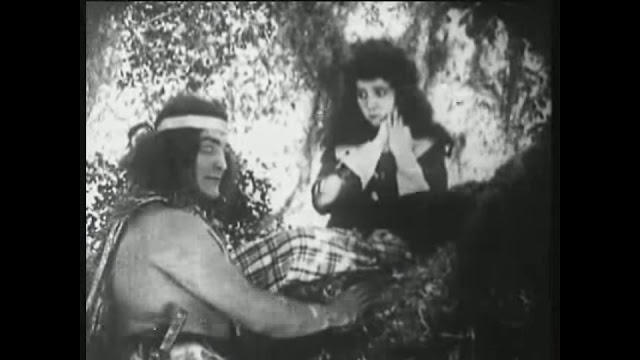 Many years ago, the honourable Lord Greystroke and his wife Alice are stranded on the African coastline after a mutiny. It's not long before they both die, and their newly born baby is left defenceless, until he's rescued and raised by a tribe of apes. The years pass, and Tarzan grows from a curious young boy to a tough determined man. When more humans come to the jungle on an expedition, Tarzan immediately falls in love with the beautiful Jane, and sets out to protect her from all harm...

Tarzan of the Apes had a pretty tough job to do in adapting a pretty = book. While it's unable to include many of the details added by the narrative, and pares the animal cast list down, it includes many of the key scenes, and it never feels incomplete. What impressed me was its faithfulness to the book for the most part. It may be simplified and =, but it's rarely untrue. 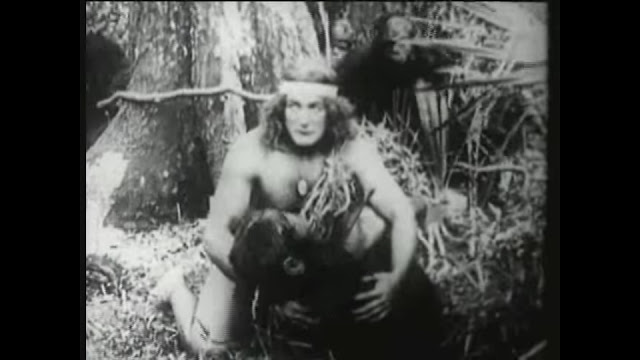 Rarely. There is one glaring change, and that is Binns the Sailor. In the book, it's just the Clayton family who are stranded, and Tarzan is raised solely by the apes, and self-taught. Here though we have a sailor accompanying the family, only to be conveniently kidnapped by Arabs until such a time as the plot needs him again. Then, 10 years later he still cares enough about the people he knew for 5 minutes to go back for them, and finds young/little Tarzan, who he teaches. He's also the one responsible for bringing Jane and co. over in this version, which adds nothing, and he vanishes completely after the second half. What really irks me about these additions is that it 'fixes' things in the book that didn't need to be fixed, and instead takes away valuable time the film could have been adapting other key scenes. 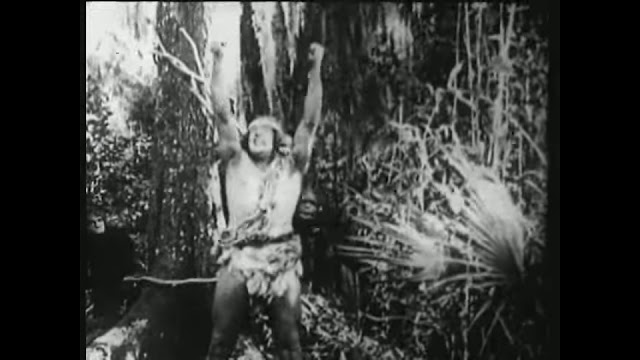 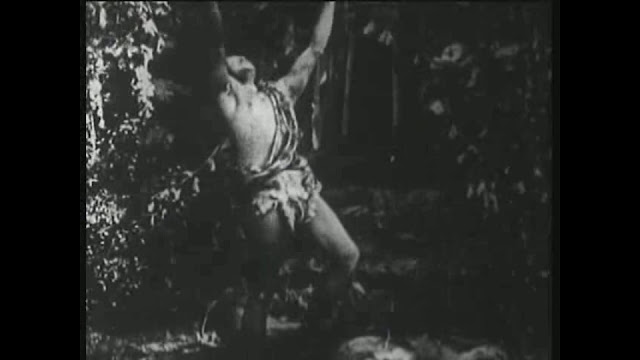 In terms of adventures, there's plenty to enjoy here. We've got pirate brawls, exotic animals, societies of apes, evil gorillas, and so on. Even on a reduced scale to the book there's still plenty to enjoy, which goes to show what fertile ground it is for making movies!

The characters are all good. Tarzan is portrayed quite well here. While not as intelligent as in the book, he's still the heroic ans resourceful hero you'd expect. I like that the movie takes its time with young Tarzan too, building the character up rather than flashing through 20+ years in a 2 minute montage. 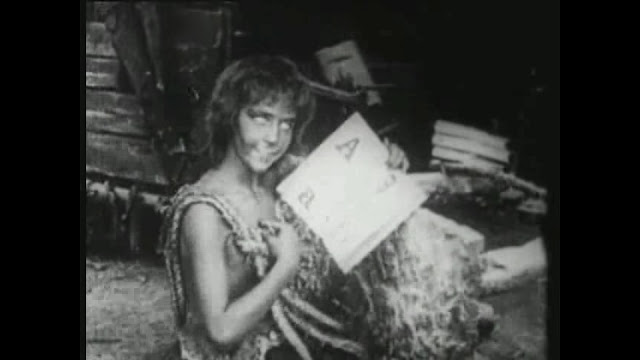 Jane is your typical damsel. She's not useless by any means, and is a likeable and pretty presence, so you understand why/how Tarzan falls for her. Her suitor, father, and his friend are sadly underdeveloped, and really could've done with more to do. Esmeralda though, while missing most of her funny book dialogue (that girl can mix and match/mix up animal names in the best way/of ways!), is still funny, and heroic enough.

In regards to race, the film isn't able to be as in depth as the book, but it's never bad. The only thing that really annoyed me was the friendly mutineer being replaced by the unwelcome Binns. 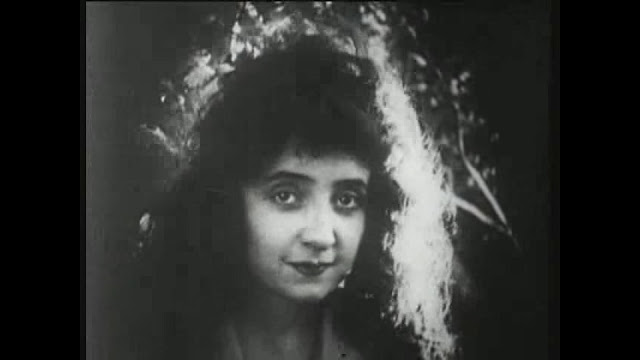 The acting in Tarzan of the Apes is decent all round. Elmo Lincoln makes for a good Tarzan. He's muscly, good looking, knows how to swing from a tree, and conveys a good appearance of yelling (more on that later). What impressed me Gordon Griffith. He does a very good job as young Tarzan, and gets half the movie to shine! Despite his sometimes/occasionally terrifying pure white eyes,  What's also surprising, and makes the movie unique, is the nudity, and how it chooses to be convincing rather than showing Tarzan being born fully clothed. Thankfully nothing one need avert their eyes from. 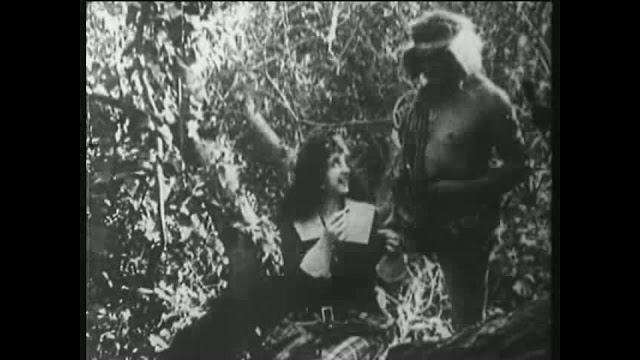 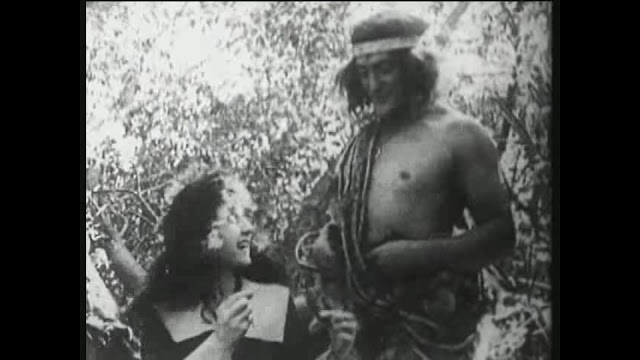 We also have Madame Sul Te Wan as Esmeralda, who does a great job, despite limited screentime. She makes every moment count. Colin Kenny is alright, held back by a fake moustache and crazy eyes.

Now to the effects. They're pretty neat! The set design is all good, and the costumes and = are mostly ]convincing]. The apes may look unconvincing by modern/today's standards, but this is a film from 1918. I'm hardly gonna throw stones because they're not on par with films made a hundred years later.

It's hard to tell what is and isn't stock footage in this film, and I mean that in a good way. If you're a 1910s era person needing an Africa fix, this is what you're looking for!

Tarzan of the Apes is a pretty good adventure. Any flaws it has are relatively minor, and the film is a simple yet effective piece, and a real good time to be had.

So, what became of Tarzan after this film? Well, Elmo Lincoln stayed on for another two sequels. One being the sadly lost Romance of Tarzan, which featured the rest of the novel being adapted (and features Tarzan battling cowboys of all things!), and a couple of 250 minute serials! So long! These successes paved the way for more to come, and we all know/ we're all familiar with the classics that came next, and the famous Tarzan cry that made history. If that's how Johnny Weissmuller sounded, how you ask, did the original Tarzan sound? Well, silent, since he was in a silent film, but if you must know...