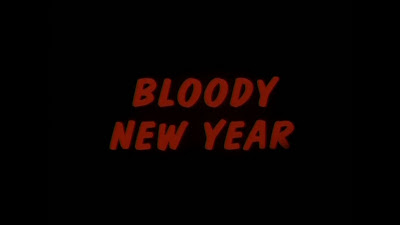 A British horror film about a haunted, demon-infested hotel, complete with a groovy opening theme? Count me in!

Bloody New Year is a 1987 horror film from British director Norman J Warren, and...has almost nothing to do with New Years!

Bloody New Year opens with a cool theme that I'm not sure I should call 80's-tastic, or 50's-tastic-Either way, the film starts off fine! The theme plays over black-and-white footage of a prom (or regular party, I'm not sure) in 1959 at the Grand Island Hotel. The film colour-fies (as in The Wizard of Oz), and when a woman goes over to a mirror, she's pulled in by her reflection. 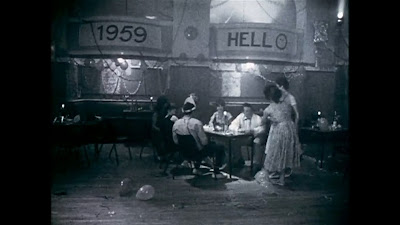 The film cuts to the 80's (I guess, there's never a title card or anything that outright says the time period), and we follow a group of young adults-Spud (Colin Heywood), Tom (Julian Ronnie), Leslie (Suzy Aitchison), Rick (Mark Powley), and Janet (Nikki Brooks)-who are at a fun-fair.

The guys spot two greasers victimising a woman at a Tilt-A-Whirl, and they help out, while Spud pulls out part of the mechanics making the carriages work. They run off, and the two greasers and their boss (also the manager of the Tilt-A-Whirl) give chase. After a while, the group lose the geasers, and the woman, an American tourist, introduces herself as Carol (Catherine Roman). 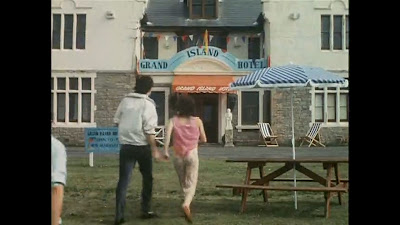 The group go out in a boat, and while sailing, the boat hits something and starts to sink. Luckily an island is nearby. Everyone swims over to it, and they walk into the island. On the way, they pass barb-wire, and a 'Danger-Keep Away' sign (the latter of which they don't see, because apparently they have worse peripheral vision than Daredevil!). They soon come across the Grand Island Hotel, which seems abandoned. 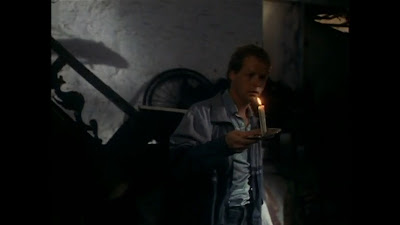 The group make themselves at home and try to get power back to the building. Since everything looks so new, they assume that people are still around. Strange things start to happen, sometimes noticed, sometimes not-pool balls rearrange themselves, TV's turn on by themselves, magazines flip shut, etc. And some of the group encounter ghosts (one which pretends to be a living maid, and another two that sing in an auditorium). 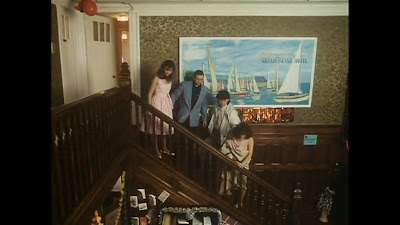 Soon later, the group finds a small theater, and they watch goofy 50's monster movie Fiend Without a Face. When it finishes, an amateur film reel of partygoers during the 1959 party (I guess) starts playing. Spud jumps up to the screen and starts making jokes about the film when suddenly one of the people in the film leaps out and kills him...Aaand his friends just watch! You assholes! You just let the film guy strangle your friend to death!

The hotel, as well as the rest of the island, quickly starts becoming scarier and violenter (that's not a word, but should be!), and soon enough, the survivors have to contend with the demonized inhabitants of the island... 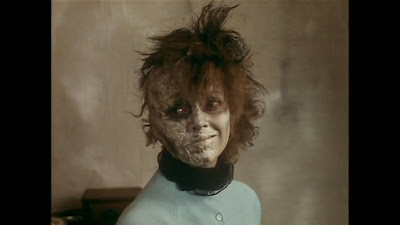 Bloody New Year, is a pretty mediocre movie. It's not terrible, or even bad, but it's not very good either.

The acting is all decent-everyone is mostly fine in their roles. Their characters however, are dumb, dumb, dumb! Like near the end, when the survivors go back into the hotel to stay safe from the greasers-the hotel! The haunted hotel, an enclosed space, that they damn well know is very happy with the idea of fucking them up, what with the demons, and murderous decor! Morons!

And they all have terrible reaction times-They never stop the film guy from killing Spud, and when Leslie is attacked by a tablecloth swamp monster, her boyfriend stands and does nothing about it for nearly ten whole seconds! 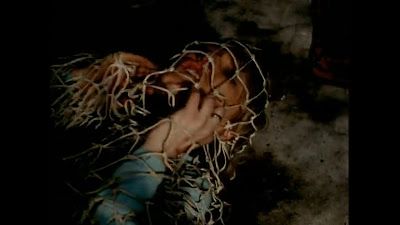 There are some weird characters in this film-the three greasers! Yeah, I get that they want to get revenge on the group, but these guys are as single-minded and determined as the freakin' terminator! The fact that they never so much as grunt, let alone speak, just adds to the weird feel about them. Also, one particular actor out of the three got my attention-This guy... 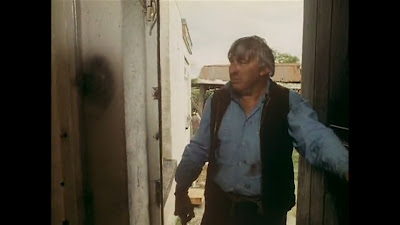 Is...Is that the bartender from Shaun of the Dead?!

One admirable thing about Bloody New Year is how the whole film takes place during daylight-the whole film! I do like me some daylight horror, although you'll notice I said 'admirable', not 'good'. It would have been good, but the film's pacing weighs the daylight horror aspect down. The pacing isn't awful, but it isn't very good. 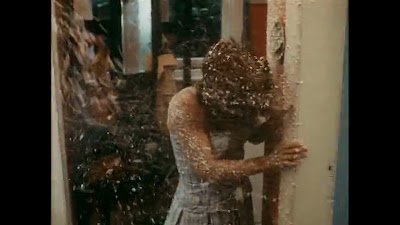 The whole final third of this movie is the characters making lots of stupid decisions  And the end reveal is pretty stupid (how the sweet hell does an operation to make planes stealthier thanks to light tricks destroy time?). The reveal, while stupid, does however make lots of the weird stuff that happens make a lot of sense. The story comes together very well, once you think about all the little things!

Bloody New Year seems to get called an Evil Dead ripoff, and it really isn't-sort-of. I'd classify it like I did with Demon Wind-Bloody New Year is almost, but not entirely an Evil Dead ripoff. The plots are VERY different, as are the characters, and the situation in which the evil stuff is happening. The 'zombies' in this film though are a bit like Deadites, and there are a couple of Sam Raimi-style POV shots here and there, but that's it. 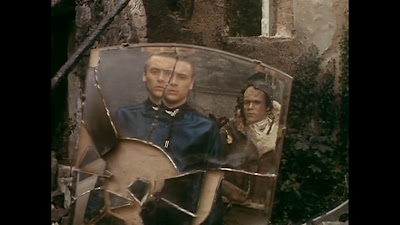 The theme, while good, doesn't fit the movie's tone at all! Some horror movies can definitely pull off a disparate soundtrack, but Bloody New Year doesn't. Still, the flm at least has a rockin' 50's style soundtrack (courtesy of duo/band [I don't know which] Cry No More)

The effects are a mixed bag. Some are good, like the not-Deadite make-up, and some rewind shots are used to good effect (as in, pool balls rearranging themselves, shattered china reforming, etc.), but others are not so good, namely, a partial dismemberment, and a scene where a lift eats someone.

So, in closing, I guess I recommend this movie, but that's assuming you can even find the damn thing! For the longest time, I thought Bloody New Year was only available on old VHS's that run upwards of 40 bucks on eBay, but it actually is on DVD-with label Redemption (which specializes in Jean Rollin and Jess Franco films). But even then, there are only two, count 'em, TWO DVD copies of this film on eBay, one of them costing about 50 bucks, the other costing...wait for it...TWO HUNDRED DOLLARS! And I couldn't find the film at all on Redemption DVD's website. So, yeah, I wouldn't bother with this film. Try watching a double feature of The Evil Dead, and some random British horror flick instead...
Posted by Chris Hewson at 9:40 AM 4 comments:

Hi readers, and what a fine April the 1st this is! I've chosen this day to review Teenage Mutant Ninja Turtles, the live-action movie! 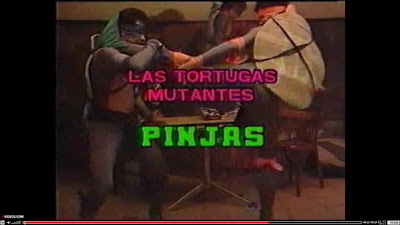 Unfortunately, while I have seen most of the 2003 TMNT series, I haven't seen any of the original series, and neither have I seen the three movies (or two movies, rather, for those who like to believe TMNT III doesn't exist), until now! So without further ado, here's my review for 1990's live-action TMNT movie!...


Teenage Mutant Ninja Turtles opens with an embarrassingly catchy theme, then cuts to the city of Argentina, where a group of dominatrixes are pleasuring a member of the Foot Clan.

I'm surprised no-one remembers this part, since it goes on for nearly ten minutes! Damn movie!

Then the film cuts to the four Turtles, Leonardo, Donatello, Michaelangelo, and Rapheal who roam around the city. 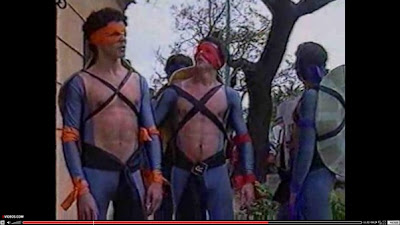 Then the group meet up with April O'Neil, who...is running a prostitution ring? Whoah! I knew the original TMNT comics were mature, but I didn't know the movie followed suit! 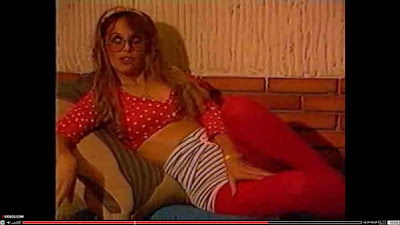 The rest of the movie is more sex scenes, until April is kidnapped... 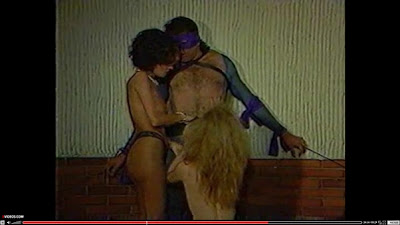 And evenually, the film ends with the Turtles, having beaten their foes, eatin' pizza and saying their famous catchphrase-"Conchadunga!"... 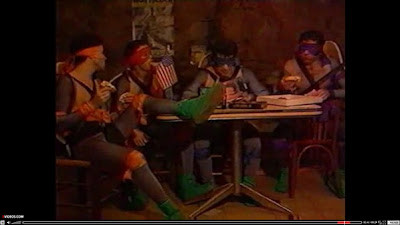 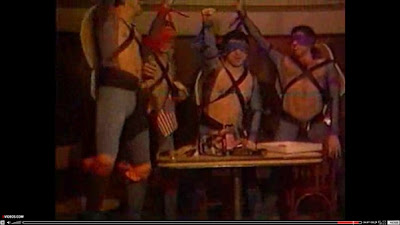