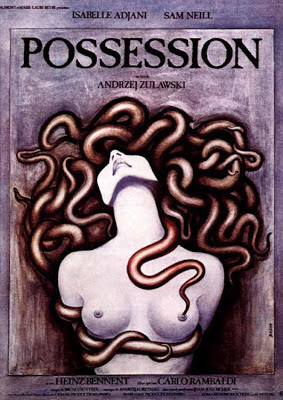 If you ever read lists of the strangest, or most disturbing films ever made, Andrzej Zulawski's Possession will usually be on them.

Possession is a...uh...film...one. bizzare. film, that stars Sam Neill and Isabelle Adjani as a divorcing couple. That plot sounds pretty inoccuous, doesn't it! Well this movie turns that plot on its head, gouges its eyes out, then feeds it to an octopus!

The film opens with Mark (Sam Neill) meeting with wife Anna (Isabelle Adjani) at a train station after a long business trip. He goes home with her, to their son Bob.

Later, the couple talk in bed-Anna wants a divorce from Mark (not that their dialogue ever clearly states that). The next day, Mark is at a business meeting, and is offered the chance to be re-hired, but he refuses, wanting to devote more time to his family. The board accepts, then one guy says, "Does our subject still wear pink socks?" Huh?!

Mark returns home, but Anna is gone. After waiting for several hours, he gets a call from Anna, who tells him that she's in town for a while, and just wants time to think. After Mark calls Margi (Margit Carstensen) friend and asks about Anna, Anna calls him and talks about her lover. Mark arranges a meeting at a restaurant, and when the couple are there, they start fighting and Mark goes mental, trashing the restaurant as he runs after her. 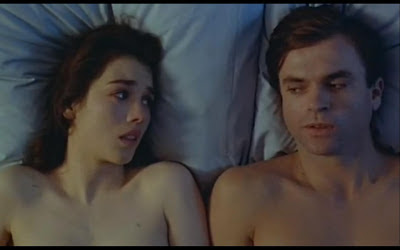 The film cuts to Mark in a hotel room, completely going to pieces. Soon, three weeks have passed. Mark cleans up, then goes back home, where he finds Bob home alone, since Anna is with her friend Margie, who broke her leg. He talks with Bob, and then the camera tries to give the audience whiplash by abruptly cutting to Sam Neill looking weird on a rocking chair, rocking back and forth like he's drunk to much coffee! And he keeps doing it while talking to Anna! 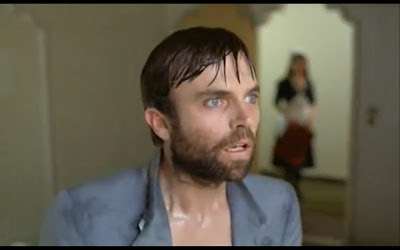 Due to her leaving Bob on his own, Mark wants main custody of him unless Anna ends her relationship with her lover. She chooses neither (er...I guess, anyway), then later at night, Mark wakes up to find Anna gone. The phone rings, and a guy tells Mark that "Anna is with me, and she'll stay with me".

Mark goes to see Heinrich, Anna's lover (how Mark found out about him I've either forgotten, or it was never explained), and the very fey Heinrich tries to justify himself to Mark. Mark goes off and tries to attack him, but Heinrich just demolishes Mark! 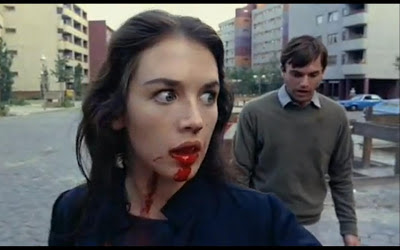 Mark returns home and finds Anna. The two fight, and after Mark beats her, Anna storms out into the street and nearly attempts suicide, causing a truck to lose control.

A little later, Mark hires a private investigator to track down Anna, and see what she's up to. 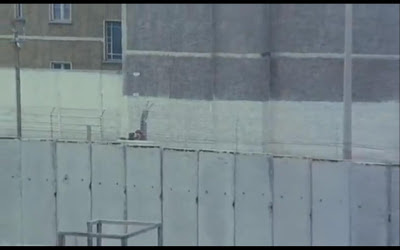 Sometime later, Anna comes back, and while Mark tries questioning her about why she's so afraid to talk with him about her affair, she tries slicing her neck open with an electric knife. Mark stops her, and bandages up her wound. 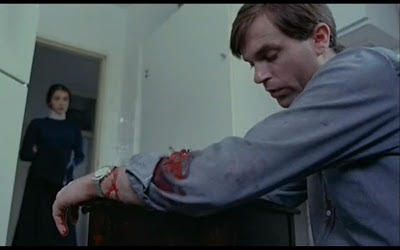 A little while later, Anna says has to leave again, and we later see her at a train station, being followed by someone. The man, one of the PI's from the company Mark went to, trails Anna to her apartment and questions her about whether some papers are in order. Anna is worried at first, but soon starts acting tipsy, and she offers the man a drink. He declines, then goes into a dark, slimy back room containing aWHAT THE HELL IS THAT AND WHY IS ANNA KEEPING IT ON HER BED?! Anna shatters a bottle of wine, runs into the backroom, then... 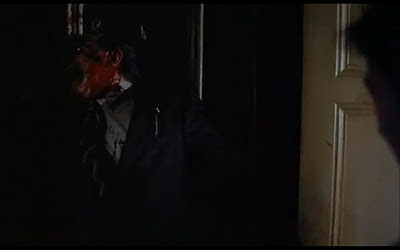 
Possession starts off seemingly as a family drama, and it stays that way for well over thirty minutes. Then the film starts to really stew in its oddness. The film doesn't really have over the top strangeness, bar the 'thing', and most of the film's strangeness comes from its off feel.

Possession is definitely well-made, and I did like it a lot. While watching it, I felt that it was overlong and moving too slow, but come the end of the film, and a while to think about it, I wouldn't want a single second cut from this tentacle mindfuck of a movie! 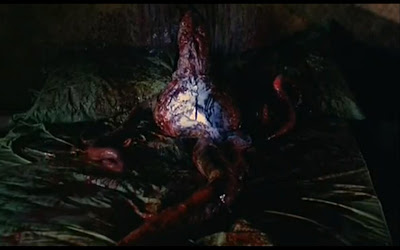 Like I said above, the film is well made. It's filmed very fluidly, and there are lots of abrupt quick cuts to different scenes. I'm not sure if it's clunky editing, or if it's deliberately edited that way to enhance the mood of the film. I'd take a guess that it's the latter.

The film is intense with its subject matter, which is easy to see, since Zulawski was going through an apparently bad divorce while writing the script.

As for the title, it took me WAAAY too long before I realized that the title didn't (necessarily) refer to spiritual/demonic possession. Or I don't think it does, at least. I see the title as referring to 'possession', the emotion. Mark is possessive of Anna to the point where he falls apart when she leaves him, he beats her up at one point when he's angry with her, and he goes out of his way to find out about Anna's lover(s). Heinrich is also incredibly possessive with Anna, and I suppose Heinrich and his mother share a dual-possessive relationship too (the two live together, talk about everything together, and can't live without each-other) Some reviews however mention Anna as sometimes acting as if she's possessed, and with scenes like the train station 'fluids' scene, that makes sense too. 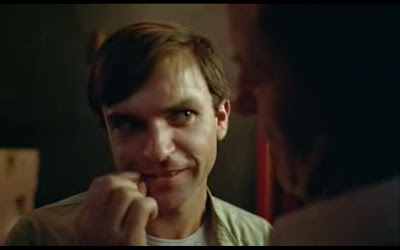 The acting is great all round. There are many moments of overacting, exaggerated acting, and just plain loopiness! Sam Neill is deliriously crazy as Mark, the husband who takes his break-up VERY badly, it's not hard to see how Isabelle Adjani won awards because of her intense and creepy performance, and Heinz Bennet as Heinrich overacts and gesticulates like crazy and twirls around like he's Kodos running for office!

There's one weird scene midway through the movie-not weird because of the film's general craziness, but because: Helen (Isabelle Adjani), a teacher at the school (and Anna's doppelganger), comes to Mark's house to see Bob, and at that moment, Bob is in the bath. When Mark directs Helen in, he just casually shows her into the bathroom, and he even asks if she can finish bathing Bob, which she accepts in stride! Huh?! HUH?!

One odd thing I didn't understand was-Who was that girl given a gun by [SPOILERS] at the end? Wikipedia says she resembles Margie, but I didn't think so.

At one moment near the end, after a 'certain body' has been found in a lift, Mark and Anna have sex, and afterwards, Mark says a hilariously pretentious-sounding sorta-speech! 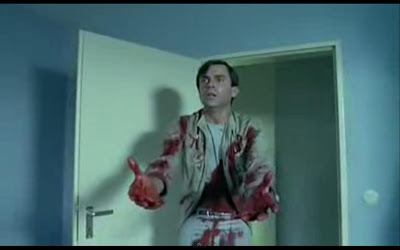 Where Possession's plot REALLY gets goofy is near the end, when Mark's former job catches up with him. Wikipedia says that Mark is a secret agent, and with only ten minutes of the film left, I thought that sounded like bullshit, but no, in the last ten minutes, there's some spy stuff going down, from tense meetings, car attacks, a violent shootout, a brutal spy with fleuro-pink socks, and four cars that explode, all in a row, for no reason!

The film's last ten minutes really are a hot potato of various sudden and out-of-nowhere things, from a spy storyline to other stuff I won't spoil.

Possession is a polarizing film. Many completely detest it. I can see where people who dislike this movie are coming from, but I did sort-of like the movie a lot, kind of.

Michael Hogben as Bob doesn't get much screentime, but that works for the film, as it helps convey how little attention Mark and Anna pay attention to him most of the time during their fights. The only character in the film who shows consistent attention to Bob is Helen (whoever the hell she is), who is with Bob, doting on him, even helping bathe him at one point instead of Mark...Holy crap! This film is the first time that I've really got a lot of stuff to think about after watching an art film! Most of the time I just don't understand anything!

Some more symbolism I may have noticed-Anna almost always wears this one blue dress, and to me, the button-up back looks like a spine. I'm not sure if that was deliberate symbolism, or if I'm just looking into things a bit too much.

Possession's locale is also worth talking about. Filmed in Berlin in the midst of the cold war, and next to the Berlin Wall, the setting is dreary, grey, graffitied and decayed.

Possession is a tough film to sit through, especially since it clocks in at just over two hours, but I definitely recommend it!

So, the moral of this story seems to be thus: If your marriage is failing, and your wife is having an affair, but won't tell you with who, then chances are, she's fucking a tentacle monster...
Posted by Chris Hewson at 7:22 AM