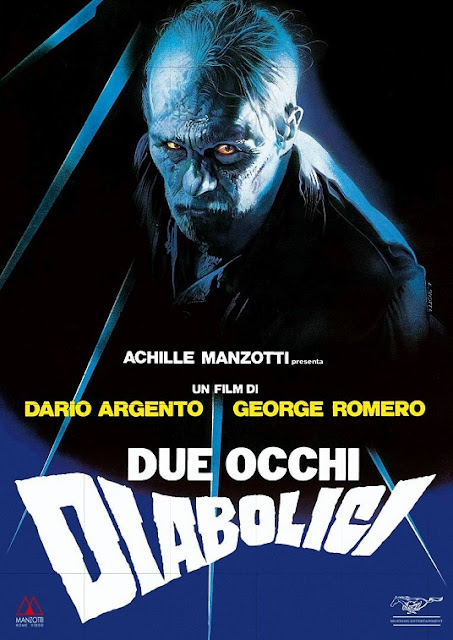 Horror icons George Romero and Dario Argento have had a long connection, ever since 1978's Dawn of the Dead. This culminated with the 1990 collaboration Two Evil Eyes... 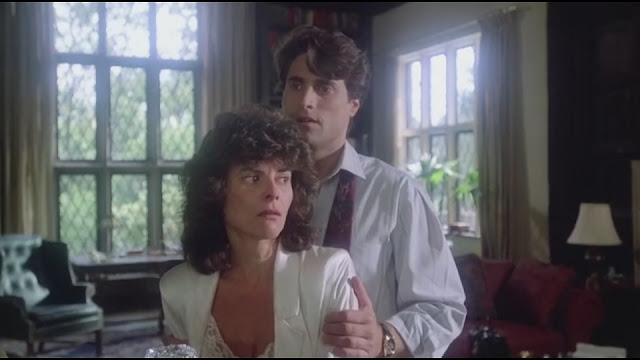 Two Evil Eyes (or Due Occhi Diabolici in Italian...not that any of the cast is) an anthology based on the works of literary icon Edgar Allan Poe. Originally intended to have 4 directors working on it, before being pared down to 2. It is long at two hours, but moves by fairly swiftly, and is an even quicker watch if you divide the viewing in half, and watch them like TV episodes 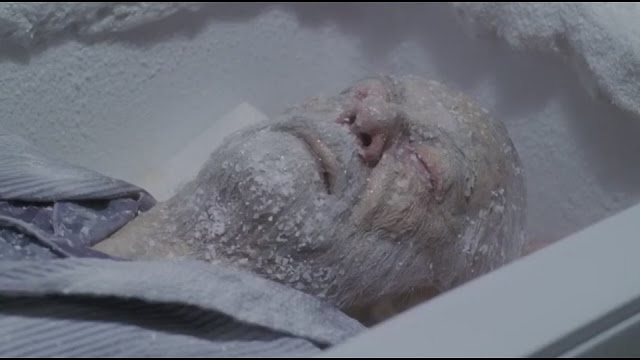 The first segment is The Facts in the Case of Mr. Valdemar. This is low-key and small-scale, and the base story is good. Younger trophy wife Jessica is eager to get her husband's money, and has cooked up a scheme with an old lover, also a doctor. They have Valdermar under hypnosis, to give the answers they need, but when he suddenly dies too early for the paperwork to go through, they decide to keep him 'alive'. Things seem to go off without a hitch, until Valdemar begins crying out for help, from beyond the grave. 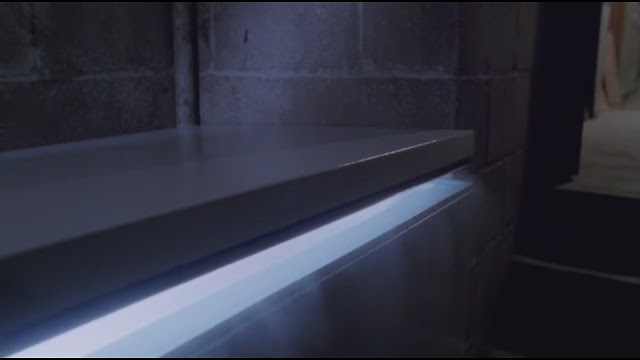 It's here where the story goes a bit off-the-rails. It was already a loose update of the original story, which is fine, but then it decides to spice things up with some malevolent ghosts from the other side. It's all a little vague. It's a decent idea, but it does feel a bit unnecessary, and unexplored. Considering Valdemar has very real grievances, I thought his being undead was already enough to cause trouble. 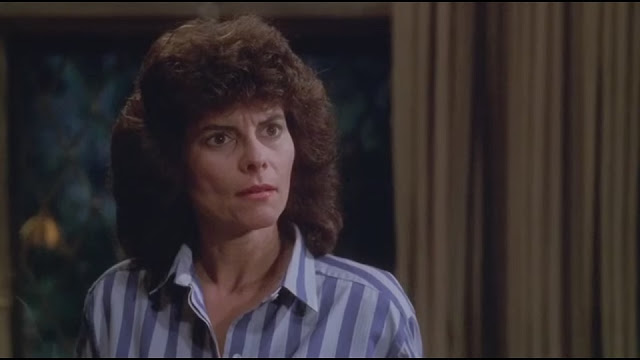 The original story is pretty fantastical and pseudoscientific, but what really sells it is the way it's told. The factual tone gives it credence. The film's understanding of hypnotism isn't as good, and half the events seem to happen by accident. Another weird thing is why Robert self-hypnotises just to go to sleep. Why not just be patient? Or take a darn sedative if you need it that badly. Naturally this all backfires in a darkly ironic(?) way. 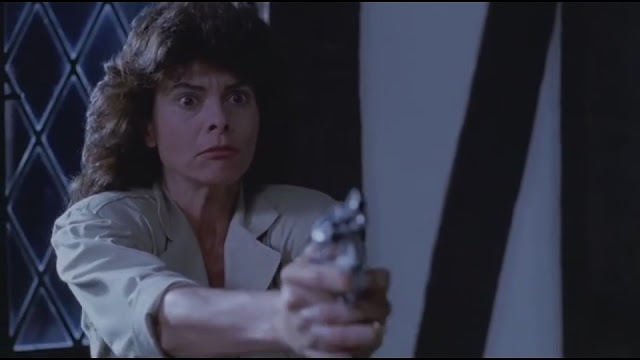 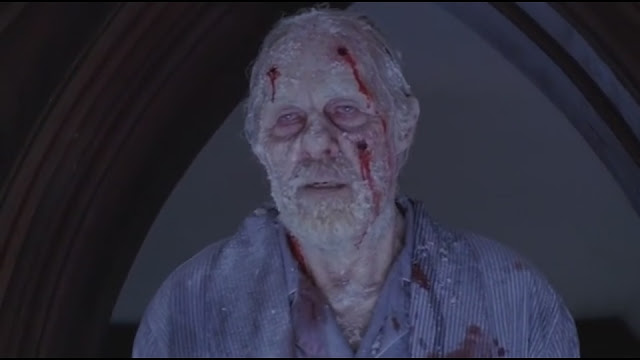 Of the two segments, Valdemar definitely feels like a TV production. Not in a bad way necessarily, though it could leave some wanting. Overall it's a decent watch.
The Black Cat feels very different to its predecessor. While Valdemar was small and cooped up, The Black Cat is wider and more expansive, with the lead's job takes him all over the place, on the periphery of other more interesting stories. The central crux is still intimate, focusing on the toxic relationship between crime scene photographer Rod Usher, and his girlfriend Annabelle. Things take a turn with her adoption of a street cat, and Rod begins to lose his mind. 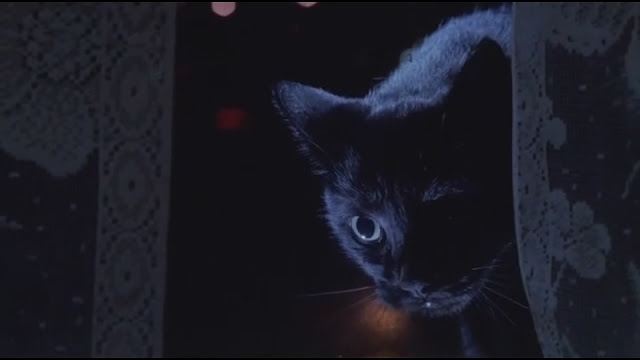 This could be a little tough for cat lovers, but the movie is never in bad taste with its animal violence scenes, and knows the art of discretion. And thankfully the movie ends with a disclaimer saying all the feline cast members were treated humanely. It is a bit of a mood killer, just as the ending hits you, and the credits are ready to roll, but at least it does come right out of the gate to soothe any worries.
Rod is a cruel man, who charms some people, sometimes through sheer brazenness, but those who really know him, or suspect, see what he's really like. Annabelle is a a bit off with the fairies, but otherwise a nice girl, and I found her relationships with her students was sweet. They're loyal too! The investigating officers are an enjoyable world-weary bunch. There's also one scene with a strange bartender!
The crime scene stuff ends up being a bit pointless. The toll of a job like that does serve as a decent reason for why Rod is so unstable, but it just doesn't play that big a part. And it's actively teasing when the story opens with a sensationalistic pendulum murder, only to not follow through on it at all. It feels like these are only there to make for good trailer material (not that any trailer would be allowed to show them), and to act as Poe references in an otherwise unrelated story. 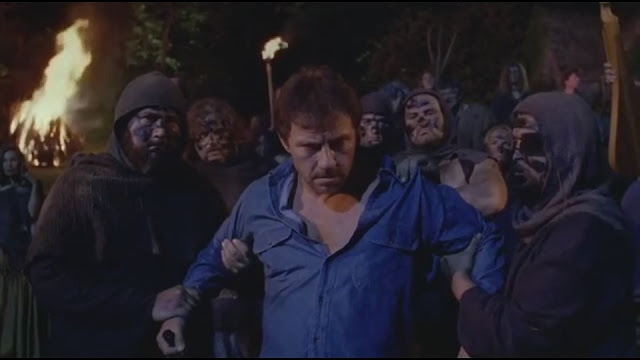 There are some good twists and turns throughout, as well as a period-set dream sequence. The ending is a little overblown (you know you're supposed to cuff both hands, right Officer?), and Rod's fate is headscratching. What was he trying to do? And why couldn't he just get the keys to the handcuffs?
The Black Cat's greatest potential could've been in mixing the gothic romanticism of old and the squalid urban environments of the new, but it never really bothers. The elaborate murders are just brief set dressing, and the dream sequence is great, but once it's over it's over. 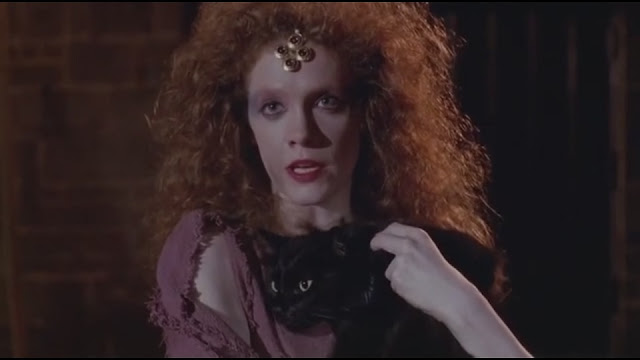 The effects are a high point here. For Valdemar, while the dead man's lips not moving looks like an obvious ADR job (even if it is partly book accurate), the make-up itself is great, especially as he increasingly decomposes. There are a few death scenes, which verge on the more subtle, to overtly gory (bordering on funny). Black Cat has a few creative crime scenes, and some gore throughout. Tom Savini does a great job with the effects work.
The acting is good all round. Valdemar's smaller cast is led by Adrienne Barbeau. Her age does make it a little hard to buy as a young goldigger, but she does well. Ramy Zada is good as the somewhat reluctant but in-too-deep doctor, and Bingo O'Malley was best to me in his decomposing role. Tom Atkins shows up briefly at the end, which is a nice treat. 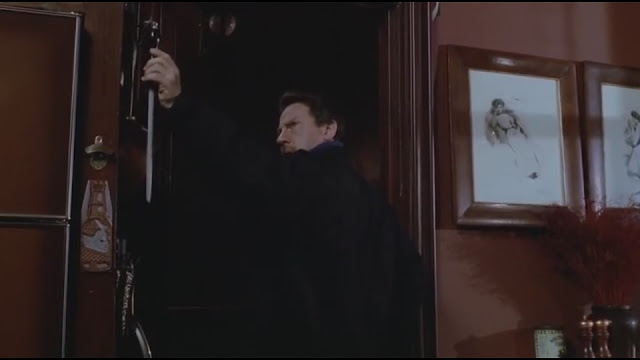 The Black Cat segment has the larger cast, headlined by Harvey Keitel. He delivers a great performance as the coldhearted Rod Usher, while Madeleine Potter is a good co-star  The supporting cast is good, with Martin Balsam, and John Amos in a fun part as the detective. We even see a young Julie Benz, as well as a cheeky cameo.
The music is overdramatic in places, quiet and effective in others. And sometimes so quiet it fades totally into the background. The song that plays over the end credits is strange, and very continental. While the rest of the movie feels very American, the composition sounds very Italian. 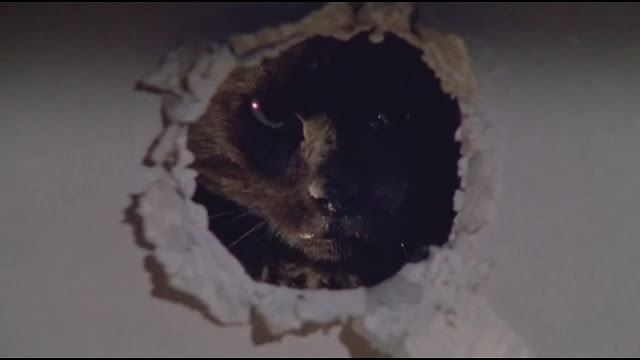 Two Evil Eyes is a decent movie, but doesn't really represent both directors at their best. It doesn't even really capture the identities of either creator. But for what it's worth, this isn't the worst anthology I've ever seen. It's not even the worst anthology about cats I've ever seen. And Edgar Allan Poe has 'inspired' far worse than Two Evil Eyes...
Posted by Chris at 8:59 AM