In the dusty towns of Mexico's vast countryside, innocent people are threatened by monsters. Wolf men, vampires, headless horsemen, and more! Only the Rider of the Skulls is a match for these terrible creatures of the night, and sure as sombreros are round, he will pledge his life to doing battle with them... 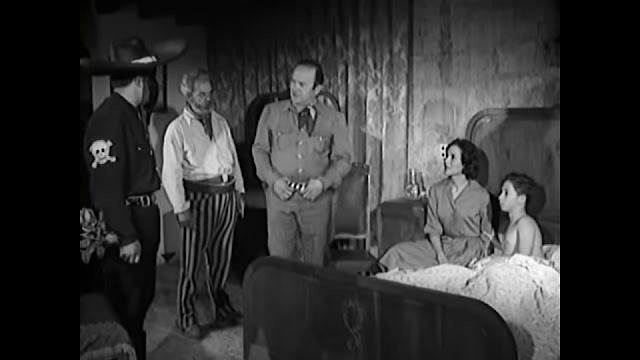 El Charro de Las Calaveras (translating to Rider of the Skulls) is an interesting artifact from 1960s Mexico. The first notable thing is its genre. It's a horror themed western, which makes it a unique experience (unless these are dime a dozen in Mexico, in which case it's your average western). And like all Latin westerns, it serenades us with some Mariachi players as the movie begins. 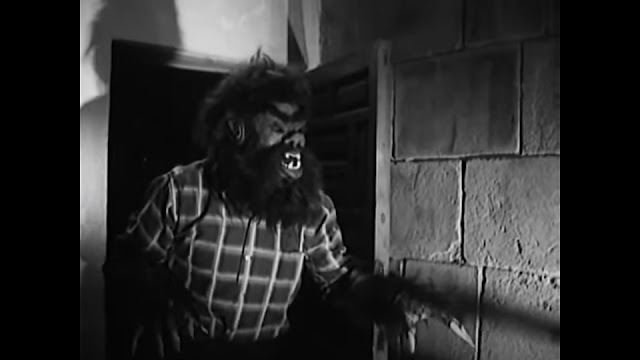 Second is the film's structure. I'm not 100% sure on the details. El Charro was either originally a prospective TV series that got edited into a movie, or began life as it is, with the intention of kickstarting a series. Either way, you can tell it's not your average film. There are three distinct stories, each running at about 26 minutes. 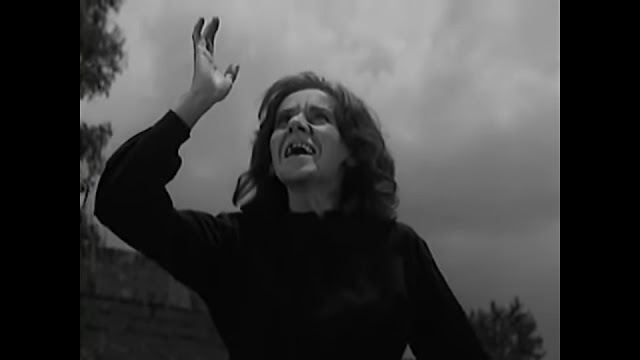 Each segment begins the same, showcasing the new threat, and who it threatens. If this is all set in the same place, you wonder how there's a town left if at least 1 person dies each 'episode'! There is a lot of variety, and not just in the main three monsters. The first town is threatened by a werewolf, and El Charro must discover the monster's human identity before it's too late for a local family.
There is also a witch present. At first I thought she was a villain, and was orchestrating all these threats. But it turns out she's a more neutral figure.She doesn't exactly seem good per se, but she helps El Charro out. Specifically, by raising the dead to give him clues! 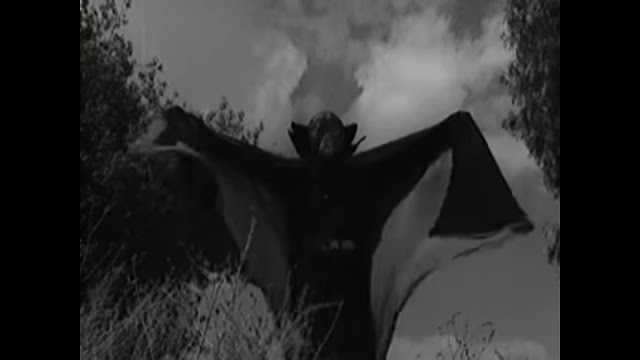 Next is a vampire, who kills a woman's father, then sets his fangs on her, seeking a new partner to spend his undead days with.
Last is a headless horseman roaming the land, searching for his lost head, which is inherited by a local woman. While El Charro attempts to fight off the horseman (apparently not having realised bullets have no effect on monsters), the woman tries to dispose of the macabre object, eventually leaving it in the care of one Don Lupe, which promptly gets him killed. Now the horseman has his head back, and aided by a mysterious group of skull-faced priests, he begins a terrible plan. 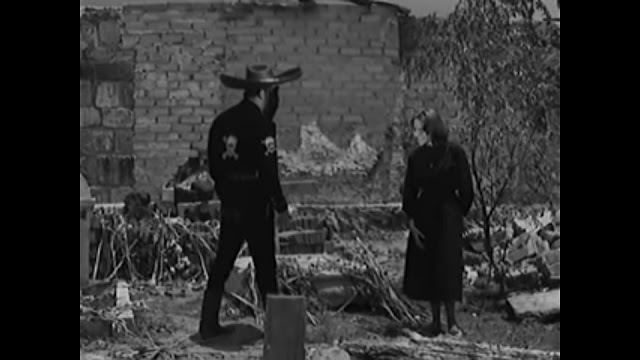 The stories in El Charro are fairly simple and to the point. The first two are very nearly copies of one another, following the same beats, but with enough different. The third stands out a bit, through a different structure, and a more packed plot. There's almost a little too much going on for one short 'episode', and it risks being a little confusing. But if nothing else, it is a fun way to end the movie! Cowboy vs undead swordfights are always needed! There is a slightly abrupt ending, but satisfying, and ends with one more Mariachi reprisal. 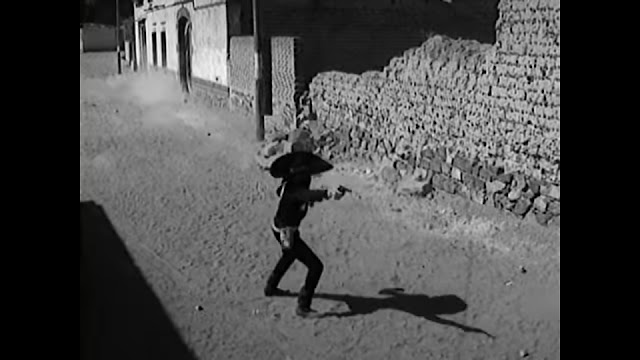 The setting appears to be the old west, until about an hour in, when we suddenly see cars, telephones, and a modern city, showing that this is set in the present day.
El Charro is a fairly cheap production, but as a western it's hardly a tall order. All you need are a couple of horses, some sombreros, and in this case some papier mache masks. The monsters all look fun. Often cheesy and hilarious, but fun to look at, and creatively designed. 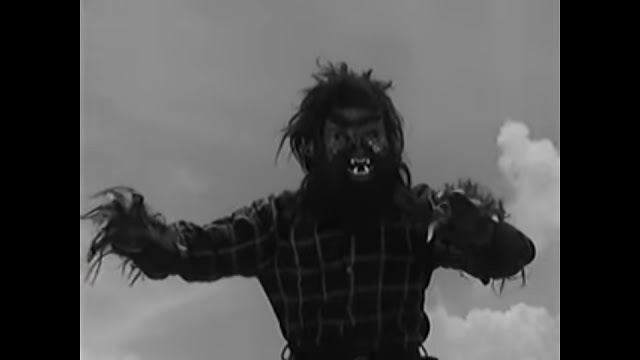 The wolf man is probably the best, and has a very creative (if baffling) transformation! The vampire's mask is the least convincing, but has adorable giant bat ears! The headless horseman is true to his name, which can only mean one thing. That poor actor! In a Hollywood film you would presume a mix of stuntwork and clever effects would pull off the visual of a headless rider. In Mexico? Just hide the dude's head, pat the horse on the backside, and watch him go! 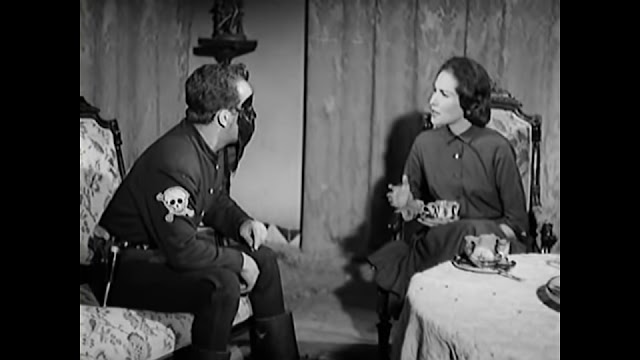 El Charro looks quite good. I like how it uses black against light backgrounds, and the film has a striking palette in black-and-white, and no doubt would have been in colour too. A lot of the film is actually supposed to take place at night (indeed, most of the enemies here are allergic to sunlight), but every scene is clearly shot at daylight. This leads to a lot of unintentional hilarity. It's just so brazen that in a movie supposed to take place at night, there's not even the slightest effort. 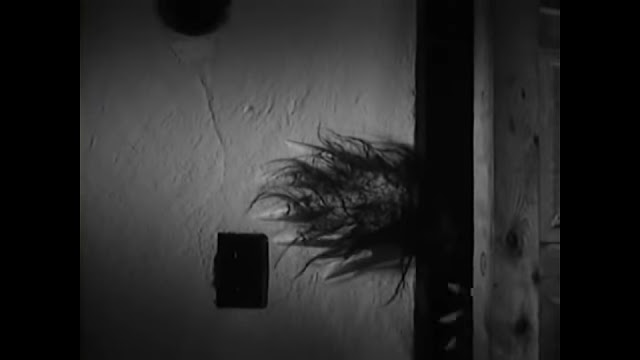 The hero has a great costume. I love the amount of skulls! More than you ordinarily expect heroes to wear. That's Mexico for you! Good guys wear black, and skulls! There's one hilarious moment where some villains try and garotte El Charro from behind, despite him wearing the widest sombrero on earth. 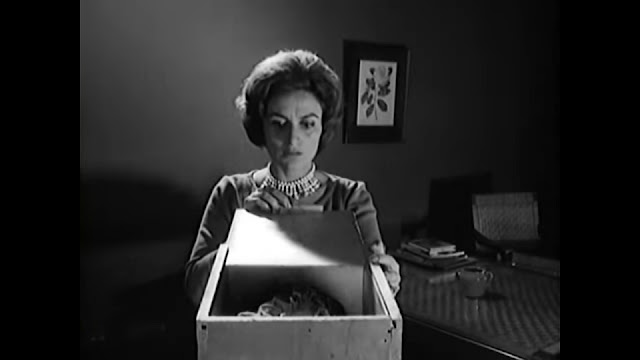 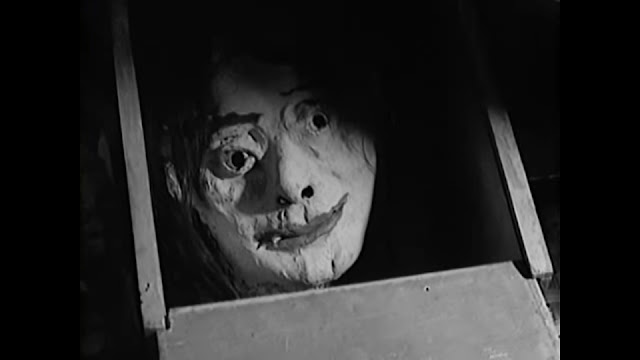 The film is full of lovely ladies, each serving much the same purpose. The first is the mother (sister?) of a friendly boy. It's up to El Charro to save her, but despite his best efforts she is killed by a wolfman. Second up is the woman the vampire fancies. I did wonder if her curse would be lifted when the vampire was staked, but then the segment ended with what I presume is the Spanish for "Though she may be dead, her soul is free". Luckily El Charro does eventually ends the movie with a surviving love interest. 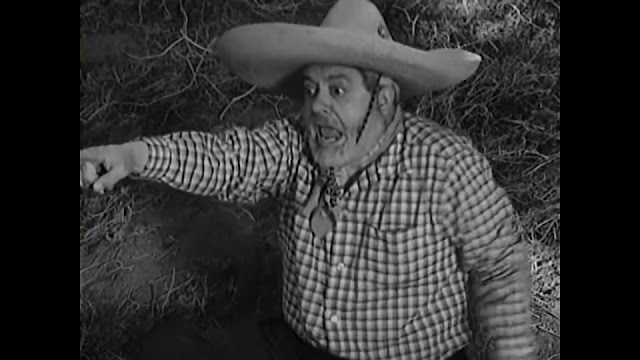 'Aiding' the Charro is the portly comic relief sidekick Cleofas. El Charro gains a pint-sized sidekick in the first story. He seemed to return in the next two parts, but apparently it's a different boy. I thought he looked different, and seemed related to the second woman, but I thought nothing of it. Goes to show how interchangeable they are. 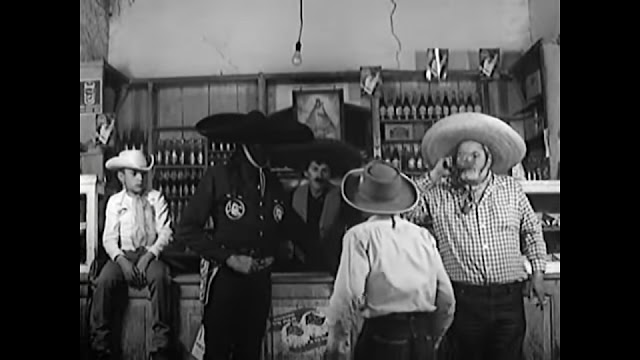 The acting is fine for what it is. I was impressed by how little we see lead actor Dagoberto Rodriguez's face! I suppose it shouldn't surprise me too much, since this is Mexico, land of the luchadors. Pascual García Peña is amusing and visually distinct as Cleofas. The actors playing the monsters all do well under their masks. Lastly, the kids are fine, as are the women, with their sometimes bouffant hair. 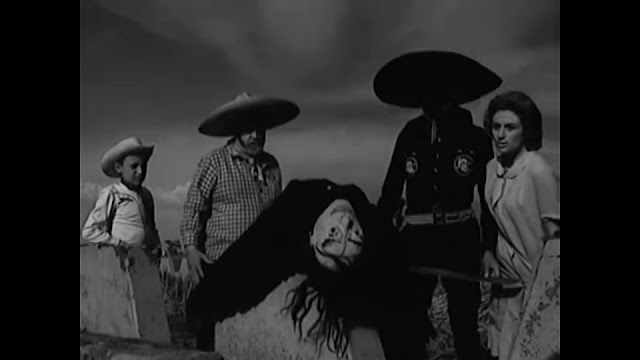 El Charro de las Calaveras is a great time! Short and to-the-point, it's a great throwback to classic western TV, with a bit of horror and monsters thrown in for good measure. It's the kind of film that could only come from Mexico, and shows why they have such a vibrant and colourful cinema. Even their z-grade efforts are something special...
Posted by Chris at 8:55 AM