Bruce Lee is by far the most renowned god...er, I mean kung-fu practioner in the universe, so famous that even after his tragic death in 1973, filmmakers all around wanted to make more Bruce Lee movies. This led to movies like Game of Death, which Lee had partially made before his death, which had it's plot morphed into Bruce Lee's character faking his death, so the stand-in for Lee could be in disquise for the whole movie-this wouldn't be too bad a way to go for anyone insistent on still making the movie...if they hadn't used actual footage of Lee's funeral!-and there's the infamous shot where a Lee stand-in was sitting in front of a mirror, an obvious cardboard cut-out of Lee's face pasted onto the mirror over his reflection's face!; and there was The Dragon Lives Again, where, after dying, Bruce Lee goes to the Chinese underwold and fights James Bond, The Man With No Name, The Godfather, Dracula, The Exorcist, Zatoichi and Emmanuelle, and is helped by Kwai Chang Caine (David Carradine's character from Kung Fu) and Popeye!-enough said!; and there was Bruce Lee Fights Back From the Grave, which had a 20-second prologue showing Lee's grave being struck by lightning and Lee jumping out from the ground...and then nothing to do with Lee is ever mentioned during the rest if the film, which is about triads or something; and there were titles like The Clones of Bruce Lee, Bruce Lee vs. Gay Power and the unfortunately never made Bruce Lee vs. Ilsa in the Devil's Triangle! The stars in these films always had soundalike psudonyms, like Bruce Le, Bruce Li, Bruce Ly, Bruce Lai, Bruce Leung, Bruce Thai, Dragon Lee, Bronson Lee, Brute Lee, Myron Bruce Lee, Lee Bruce and many others. Probably the most mainstream of these movies would be 1976's New Fist of Fury, starring Jackie Chan! 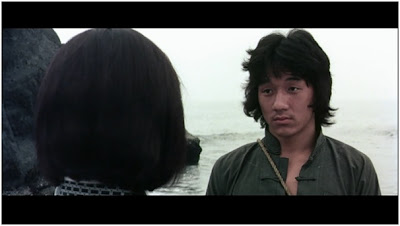 A sequel to Lee's Fist of Fury, New Fist is set during World War II, in Japanese-occupied Taiwan. It's about thief Ah Loong (Jackie Chan), who resents the Japanese, and a local kung-fu school dealing with Japanese adversity. 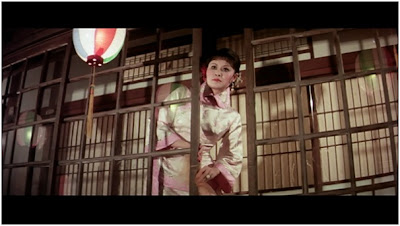 Ah Loong is at the island's docks, looking for expensive luggage to steal. He takes a case containing what he thinks is valuable treasure, and opens it when he goes home with his Uncle, finding that inside it is a set of nunchucks, which he takes with him as he goes to gambling ring DaYang Gate, who are offering him a job. Loong declines and is set on by the gang, who he fights back with the nunchucks, succesfully until he knocks himself out with them...yeah, the film uses THAT gag! He is rescued by the Seven Peaks Kung Fu school, who are led by Miao Li-Er (Nora Miao), who wants to train Loong so he can defend himself. 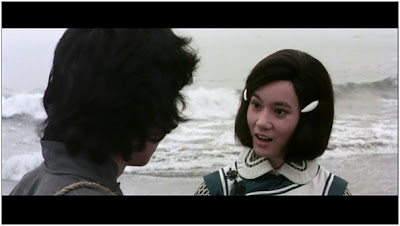 The school is opposed by the villainous Okimura (Chan Sing), who's a dead ringer for Lee Van Cleef. Things come to a head when assassins try to kill Okimura (and fail spectacularly, though you can't really blame them when the guy they're trying to kill can stop a knife thrust by catching the blade in his mouth!). Okimura is the head of DaHe Gate, another local school which he wants to ecompass all the other local schools. 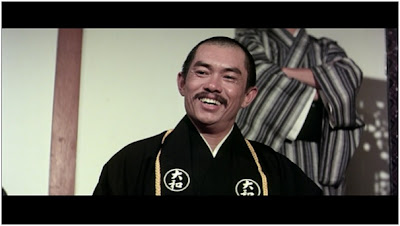 Things get worse when Elder Xu, the master of Seven Peaks dies of a heart attack (presumably) during a play, brought on by Okimura's taunting (though it's kinda Xu's fault that he has a coronary, he did leap about thirty feet all the way onto the stage and bellow at Okimura's gods! (intimidating the hell out of the Japanese). With Xu gone, DaHe Gate goes to Seven Peaks, it's name now changed to Jing Wu, and Okimura's daughter breaks the Jing Wu sign. 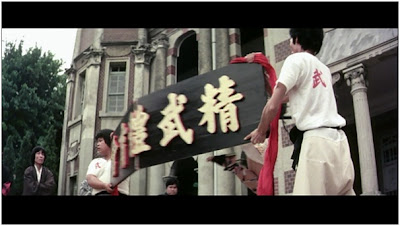 If you're wondering why I haven't mentioned Jackie for two whole paragraphs, it's because after the bashing, he vanishes from the film for abut 20 minutes. He reappears, standing out in the streets after Okimura has just warned them from opposing him or breaking his rules, and he rallies all of the twownspeople back to Jing Wu school, and holding the now repaired sign as they go. 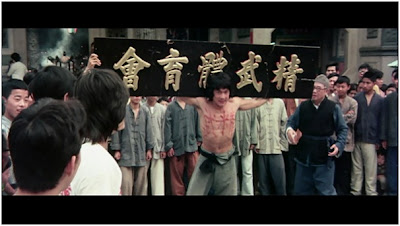 In the meanwhile, Okimura has informed the Japanese chief-of-police that Jing Wu is hiding rebels. The police inspect the school, but Loong's uncle has managed to lead the rebels out in time. The police take Miao and another teacher in for questioning and plan on killing them, but they are bailed out by the local governer. These scenes would be easier to take these scenes seriously if the chief-of-police didn't have an extremely historically subtle moustache. 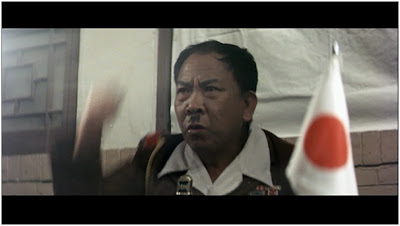 Then Okimura sets up a contest between all of the local schools. If  the schools can't beat his best fighters, then they will have to concede and name their schools DaHe Gate-now it's up to Jing Wu to win freedom for all of the schools... 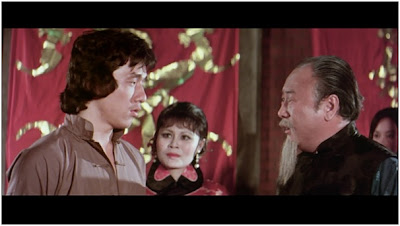 New Fist of Fury is a decent kung-fu flick all throughout. It probably copies Fist of Fury's plot, but I haven't seen Fist of Fury, so I was fine watching New Fist without the plot bugging me. The film's score is good (and unlike Snake and Crane Arts of Shaolin and Fearless Hyena, it doesn't lift music from Monty Python and the Holy Grail or The Pink Panther, although those are much better movies). The kung-fu looks well choreographed and is plentiful enough througout the film. And as for the direction 'by Lo Wei', it's pretty much point and shoot (presumably done by someone who isn't Lo Wei, who was a lazy bastard who was always too busy sleeping or listening to horse races on radio to pay attention to his own movies). 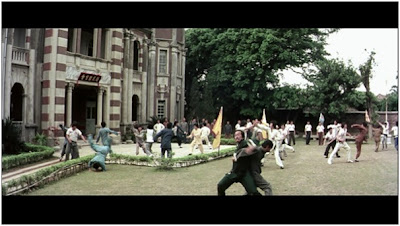 Onto the bad, the film's editing is good in some places but terrible in others. There's a hilarious scene where several people are slaughted with katanas and there are literally no blood effects, the killers just surround the other guys and swish their swords while their victims flail around, try to run, and die, hilariously unconvincingly!-and what's even worse is that the victims are wearing all white suits so the problem is even bigger! 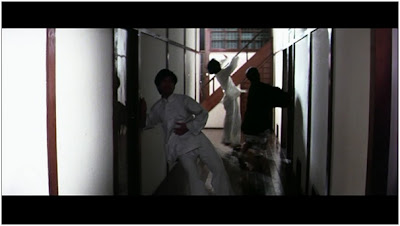 And of course there's the ending!

The main villains are all dead and there's 30 seconds left of the movie. Jackie rallies up everyone to stand up against the Japanese, who "have gone too far". Everyone leaves the building, standing up for their country and rights!...And are all shot to death! Including Jackie! The End! 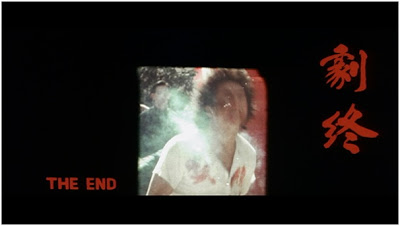 That is one hell of a downer ending!

At least Okimura Van Cleef was a fun villain...
Posted by Chris Hewson at 8:20 PM