Note: I don't own this movie on DVD, so I rewatched it on youtube, and pulled screenshots from the same source, so the images might be a bit grainy and they have subtitles.

March the 17th, normally St. Pattie's Day, but a much more important reason to celebrate the day is because it's Kurt Russell Day! ...And I don't actually own any Kurt Russell moves, so I've resorted to looking on youtube for the whole of 1987 romantic-comedy Overboard... 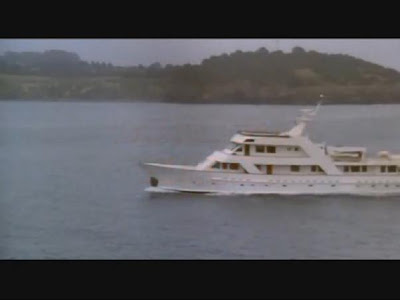 The film opens with carpenter Dean Proffitt (Kurt Russell) being called onto the boat of snobby rich-bitch Joanna Stately (Goldie Hawn, so he can fix her shoe closet. While he gets the job done, the bitchy Joanna is disgusted at his 'slobbish' demeanor (leading to a great comeback from Russell-Joanna: "You know, forks were invented so man could at least make a pretence of seperating himself from the apes!" Dean: "So were thumbs."). A couple of days later, Dean finishes the closet, but it's not done to Joanna's 'satisfaction' so she fires him, leading Dean to have an angry outburst at her, which makes the boat's whole crew cheer! Joanna refuses to pay Dean and pushes him off the ship. 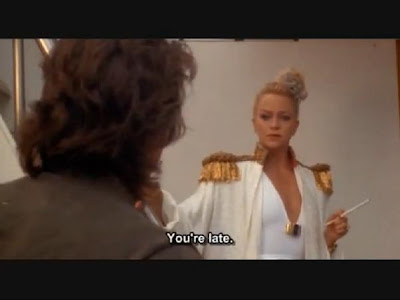 After borrowing replacement tools-for the ones destroyed by Joanna-from his friend, Billy (Mike Hagerty), Dean goes back to his house, where the local school's principal has come to visit and is being 'attacked' by Dean's kids. She tells Dean that as a single father (his wife died three years prior) he can't properly take care of his children by himself, and storms off. 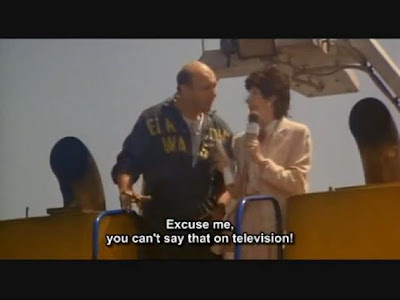 Meanwile, come nightfall, Joanna realizes that her wedding ring is off her finger, and on the boat's deck. She goes out on her own to get it, and falls overboard, which her husband, Grant (Edward Herrmann) doesn't give too much of a shit about because he turns the volume of the tv he's watching up so he can't hear her cries for help. 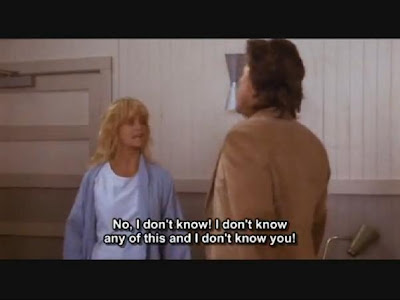 The next morning, a garbage ship has picked up Joanna and she is taken to the hospital, suffering from amnesia. Grant goes to the hospital and is about to collect Joanna until he sees her being her usual abrasive self to a doctor, then he ditches her and leaves. Meanwhile, Dean sees a tv report on Joanna and thinks of a plan to get her back for what she did to him!... 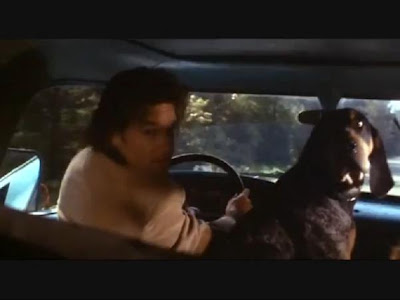 Dean goes to the hospital and claim's to be Joanna's husband ('proving' that he is by telling the doctor's of a birthmark on her...think Carry On Screaming). Telling her that she's Annie Proffitt, he takes her home to his ramshackle house, and after explaining her 'past' to her, he gets her to do several chores (which involve a chainsaw and killer laundry equipment). 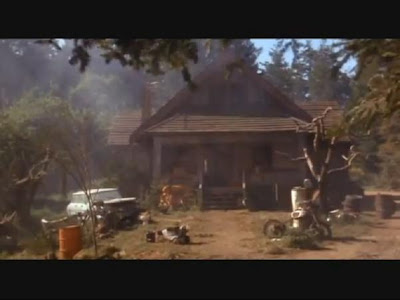 Over the next few days, Dean starts to warm to Joanna and vice versa, leading to Joanna helping Dean and Billy with their plans for a miniature golf course. Eventually Dean starts to feel guilty and decides to tell Joanna the truth, but gets cold feet and tells Joanna that it's her 'birthday'. They go out to celebrate, and grow closer. 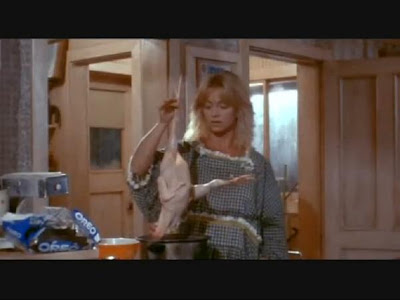 Meanwhile Joanna's mother is calling the boat, forcefully asking Grant where she is, leaving Grant to go and get her back...


Overboard is a fun movie! It has very quotable lines throughout, funny scenes, adorable dogs, and Kurt Russell and Goldie Hawn are loads of fun in their roles, and they both have visible chemistry with each-other. The rest of the acting is good, and there aren't really any bad performances. One weird part though is when Joanna's husband Grant randomly goes insane and think's he's a god at the end for no reaason!-(ala Hammer at the end of 1990: The Bronx Warriors)   Roddy Mcdowall (the film's producer) is only in the film briefly until a scene at the end, and he's very good in the role. 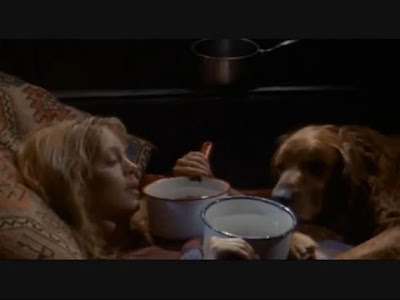 So in closing, despite being a romantic-comedy, a genre that I normally can't stand, Overboard is an entertaining, worthwhile watch.


...Yeah, this is a blog named after a Fu Manchu character, and I've reviewed a romantic-comedy of all things before I've gotten around to reviewing anything with 'The Devil Doctor'!
Posted by Chris Hewson at 8:56 AM