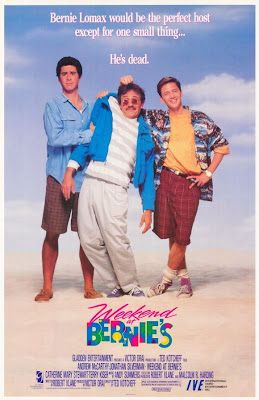 Tell me if this has happened to you before! You go to your boss' house in the Hampton's to party, and then he dies, and you try to cover up the fact by hauling his corpse around like he's alive! And then you're quickly found out, arrested, then charged for desecration of a corpse, jailed, and fined several thousand dollars...Yeah, real life does tend to go in a different direction than Movie Land! Case in point, the 1989 comedy Weekend at Bernie's...

Weekend at Bernie's opens with Richard (Johnathan Silverman) and Larry (Andrew McCarthy), two office workers at an insurance firm, heading to work-which sucks for them because of the massive heatwave the city's going through.

While trying (and failing) to cool off on the roof, Richard finds an insurance error-Four insurance policies were made out to the same deceased person, all after he died (or something like that, insurance isn't really my strong point). The two, thinking they'll be heroes once they report a two-million dollar error to the higher-ups, decide to talk to their boss, Bernie Lomax (Terry Kiser) about it. 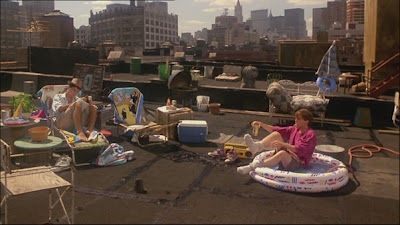 Richard and Larry report the error to Bernie, who, unbeknowenst to the duo, is behind the 'error', which is really an insurance scam. Bernie tries to dissuade the two, saying there's a mistake, and there is no error. When confirmed otherwise, Bernie pretends to be proud of the two, and tells them to not tell of their findings to anyone, and he offers them the opportunity to stay at his house in the Hampton Islands for the weekend. 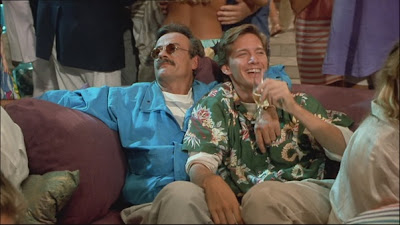 Later that night, Bernie talks with his mob associates, and tells mob boss Vito (Louis Giambalvo) to get someone to kill Lary and Richard, and frame them for the insurance policy scam ("That way, we don't even have to change the books!"). He tells Vito orchestrate it to look like a murder-suicide job, which he accepts, but the moment Bernie leaves (along with Tina (Catherine Parks), Vito's girlfriend, who Bernie is secretly having an affair with), Vito tells hitman Paulie (Don Calfa) to forget that job and instead kill Lomax.

That night, Richard goes on his date with Gwen, which goes well until the end of the night, when it gets botched. 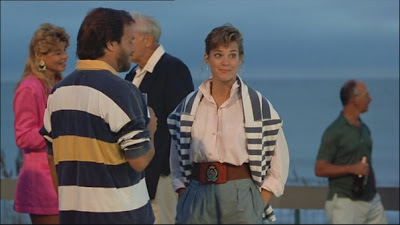 The next day, Richard and Larry head off to the Hamptons via ferry and arrive at Bernie's house-Trouble is, he's dead...

The two realize that Bernie is dead, but they decide not to call the police in-case they might suspect the two had something to do with Bernie's death. Then, before they can do anything else, the house fills up with guests over for a party, and they all assume Bernie is alive. 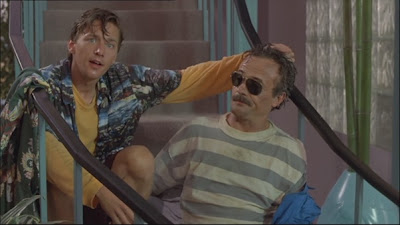 Among the partygoers is Gwen, whose arrival makes sure that Richard doesn't want to call the police for a while. They both join the party, and Bernie's body eventually ends up falling down onto the beach, where the tides drag it away.

Later that night, as Larry has some fun at the party, Richard talks with Gwen on the beach, and as the two are about to get physical, Bernie's body washes up along the shore next to them (Bernie Lomax-Still cockblocking people even when he's dead, right up there with Jason Voorhees from Friday the 13th Part IV!), causing Richard to quickly get Gwen away before she sees the body. 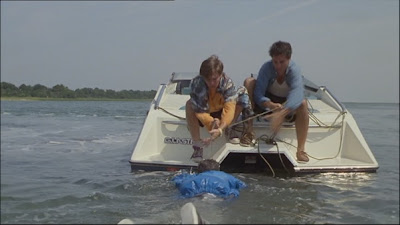 Richard and Larry keep the charade up through to the next day, then eventually the find out that Bernie was murdered, and thanks to a recorded phone call of Bernie, they think that his murderer is also after them. And elsewhere on the island is Paulie, who's growing unhinged at constantly seeing Bernie alive... 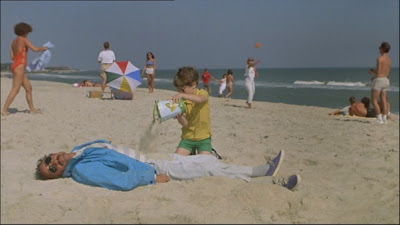 Weekend at Bernie's is a fun comedy. It isn't groundbreakingly hilarious, but it's a funny watch all the same.

The acting is all fine. Andrew McCarthy and Johnathan Silverman are very good, and Terry Kiser is good in the few minutes of screentime he has alive. Don Calfa (Ernie from Return of the Living Dead) is also fun as hitman Paulie. 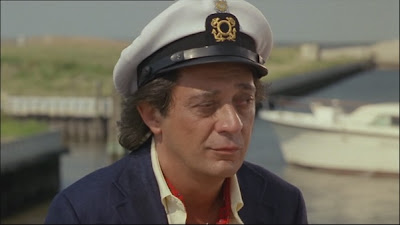 Among loads of other funny scenes, there's scenes like the burglar at that start, and the part where Richard and Larry catch the ferry to the island! That latter one was one of my favourite moments from the film!

As morbid and stupid as the scene when Vito's girlfriend Tina sleeps with corpse-Bernie is (this movie is kinda fucked-up!), it's still a funny scene, and it leads to a hilarious line from Andrew McCarthy-"I get yelled at when I just lay there!".

Aside from Silverman and McCarthy's performances, one of my favourite things about Weekend at Bernie's is the fun reggae theme! "Ohooh yeah, some like it hot! Some like it cold! Some never know..."

Probably Weekend's biggest problem is that it isn't a black comedy. Despite the morbid plot of hauling your boss' corpse around and pretending he's alive, given the way people behave, as well as the tone of the film, it doesn't come across much as a black comedy at all, but pretty regular. This doesn't affect the movie too much, but it's still distracting. 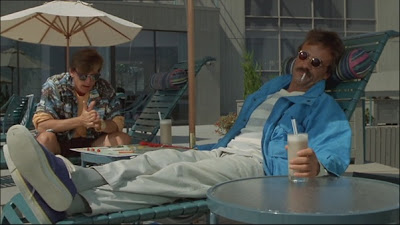 Another problem is that until Richard and Larry find out that the hitman isn't going to kill them if Bernie's around (so they think), their reason for hauling Bernie's corpse around like he's alive is pretty flimsy.

So, to finish, Weekend at Bernie's isn't a fantastic film by any means, but it's still a lot of fun, and I definitely recommend it!

The real burning question though is...Why the hell was there a Weekend at Bernie's 2? Richard and Larry steal Bernie's body from the morgue using voodoo magic so they can find buried treasure?! Mobsters get turned into goats?! Magical voodoo gypsies?! Mystical conga line music that reanimates Bernie every time he hears it, and sends him in the direction of the treasure?! Whaaaa?!...
Posted by Chris Hewson at 7:36 PM