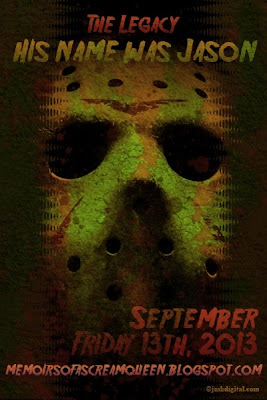 It's that time of year again-Friday the 13th is coming up! It really is the best time of the year next to Halloween that I'm able to easily sacrifice virgins and bathe in their blood.

Jenny Krueger of Memoirs of a Scream Queen is one again hosting The Legacy: His Name Was Jason, where the objective is to make a post relating somehow to the Friday the 13th movie series. Last year, I did a triple-review of Friday the 13th Parts II to IV. I can't believe it was only a year ago!...No, really, I can't at all! It feels like it was at least two! Trippy as hell!

Since I only own one other Friday the 13th movie, it'll be a smaller post than last year's, but that's no matter.

So, come back on Friday the 13th (or 12th, or 14th, depending on time zones) to see me reviewing the so-called 'worst' movie in the franchise-Friday the 13th Part VIII: Jason Takes Manhattan!...
Posted by Chris Hewson at 8:29 AM