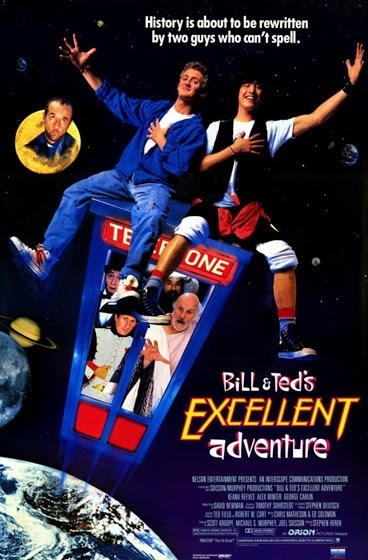 My most excellent friends, let me tell you about the radical journey of Ted Theodore Logan and Bill S. Preston Esq., two most triumphant dudes!

Bill and Ted's Excellent Adventure is one of the most fondly remembered films of the 80's. It's a comedy about two slackers with aspirations of greatness in their band Wild Stallions (spelt with a lot more radical Y's in the movie). Unfortunately the two are flunking history, and if they fail their final test, they'll be expelled, and Ted will be shipped off to military school by his asshole father. Rufus, a mysterious guy from the future, comes to the town of San Dimas to help Bill and Ted with their report, temporarily giving them a phone booth time machine which they can use to travel the network of history until they find the answers for their test...

This is perfection! The kind of movie you want to see a million sequels to! Unfortunately they did make a sequel, which was most bogus!...Ok, most people just think of it as pretty 'meh', rather than truly awful, but still. There also may or may not be a third movie* on the way in the possible future.

*A Third Bill and Ted movie? But they're middle-aged now! How could we see a fifty year old Bill and Ted and take it seriously? As for the lack of Rufus due to George Carlin's death back in 2008, most people say you can't make a Bill and Ted movie without him, but Bill and Ted 3 wouldn't suffer too much from the loss, given he's only in the first film for less than five minutes.

*Oh, and sorry for the most egregious lack of images. I saw this on TV, and don't own a physical copy, so I can't take screenshots. Most un-radical.


This movie is hilarious! Enough said!

Ok, I'll say more. The humour is consistently funny, Bill and Ted are great characters (I especially love their laidback attitude when in the various time periods), the whole finale is great, and by the time the movie's over, you'll have a smile plastered on your face!

Practically every scene is golden, from Bill having the hots for his stepmom, to the duo meeting their future selves, a switch-flip wild western saloon fight, and historical figures like Genghis Khan, Abraham Lincoln, Dr. 'Frood', So-crates, Billy the Kid, etc. enjoying themselves in various different ways in a mall, but my favourite is the 'In Time' one. If you've seen the movie, you know what I mean!

Alex Winter and Keanu Reeves do great jobs as the title duo! They're hilarious, get great lines, have great characters, and Keanu Reeves can actually act here! (Not to knock on Keanu too much)   George Carlin is mildly funny as Rufus. I say 'mildly' as he's barely in the movie.

The actors playing the historical figures do their jobs well, their acting is good, and in the case of Go-Go's musician Jane Wiedlin, who play Joan of Arc, she's a cute babe! And speaking of Joan of Arc, I like to think that in this universe, she lived happily ever after in the present or future, or went back to her own time and kicked some ass, avoiding her horrible death. And as for Beethoven seemingly being able to hear in this movie, I don't mind. Why? Because he's Beethoven! The man was deaf, yet still composed some of the geatest symphonies known to man. I can buy that he heard the bodacious tunes of an electric keyboard.

The effects are cheesy, but good. And the movie's soundtrack is most excellent! WYLD! STALLYNS!

I leave you with the most excellent recommendation of this outstanding movie! Don't make the egregious mistake of missing out. Later, dudes and dudettes! Party on!...
Posted by Chris Hewson at 9:51 AM