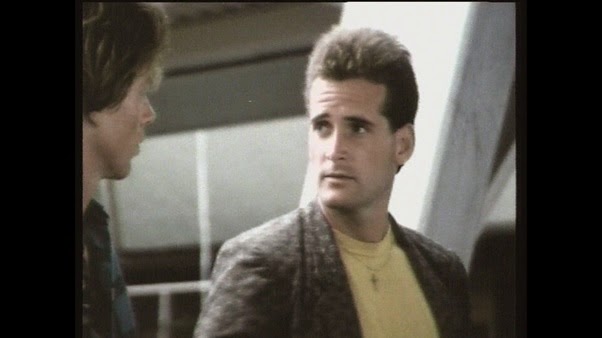 Back in 2011, I talked at length about the damn-near lost Pierre Kirby film, Crackdown Mission (who he is and what IFD is is explained in that link). The film is actually mildly easy to locate on German DVD, but, and this is a big but, there is no English language track! (and what we have is the German equivalent to the English dub for Andreas Schnaas' Violent Shit III). Unless this DVD company is being a dick and withholding it, then the English track is either sitting in a moldy basement in China gathering dust, or it literally doesn't exist anymore, which is a damn shame. Especially since this plot is the most unique Kirby ever got! I mean, he was in Thunder of the Gigantic Serpent, but he never actually met the serpent, as it was in Movie A, whereas he was in Movie B, but here, we have Ted Fast himself battling a satanic cult of evil doctors (who seem to have actual supernatural powers to boot)! 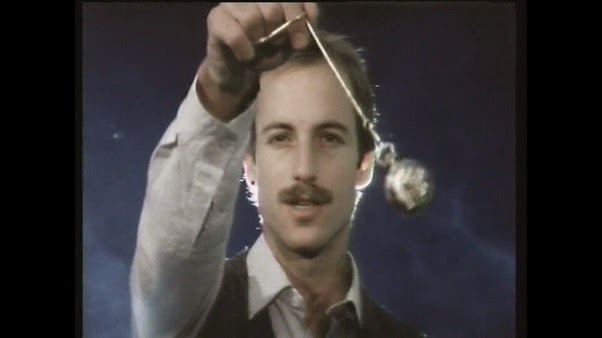 While this movie isn't too hard to track down, there's absurdly little information about it on the interwebs. It's crazy obscure! There are only three reviews of it on the entire internet, and two of them are in German, so unless there's a deep dark Pierre Kirby rabbit hole 100 Google pages into a keyword search, or I'm literally the only English person in the world with a review for Crackdown Mission! God, I really hope it's the former! 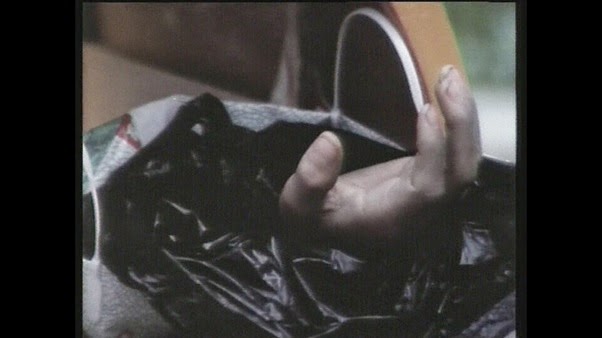 Unfortunately, the DVD company decided to censor the Crackdown Mission DVD of all nudity and violence. I've no idea why, seeing as how the action here isn't all that violent at all. Was the re-edit done by a 'moral guardian' who just plain hated action? Thankfully they've released a re-issue DVD which is uncut (so says the cover, which is how I was clued in), so I'm here to provide a comparison. What did the first DVD print remove, and what's the complete film like?...

Before I get to that, a refresher on the plot. Crackdown Mission is about what I mentioned above, but that's only the IFD Movie B segment. The rest (i.e. the remaining three-and-a-half quarters) is an Asian take on Ms. 45 (which I never mentioned in my original review, as it slipped my mind). 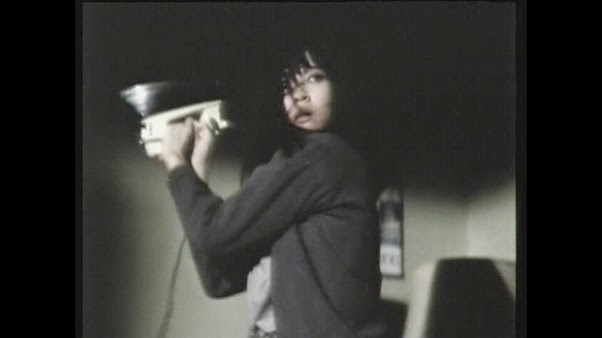 The uncut version opens up with the traditional IFD opening-a Columbia logo ripoff with a Star Wars theme. Following that is the first major difference between DVD's. In this version, we see the whole opening sex-scene, wherein, 1, there's more nudity (WOOOOOOO!), and 2, it's shown that the double-murder wasn't caused by an intruder as I always thought, but rather the woman poisoning the guy, then killing herself.

Next, there's an extra rape scene, which given its placement in the story makes this more of an obvious Ms. 45 knock-off than it otherwise would be (the woman gets raped in an alleyway, goes home distraught, and gets raped by a burglar who's robbing her apartment). This scene explains why right after, the woman starts crying. In the censored version, her demeanor comes out of nowhere. 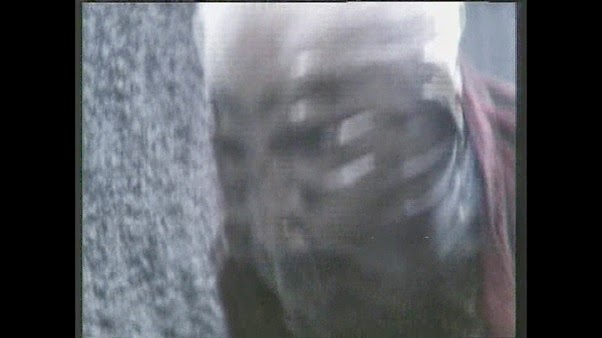 Most of the second rape scene is also kaput in the censored version, as is the burglar getting his head smashed in with the lamp/ornament/whatever the woman uses. It goes from her grabbing it, to a rough edit to her hiding an iron under the bed for no reason, then going outside her apartment and loooking at the stairwell while etheral cackling is in the air. Along with other scenes, this is why I originally though this was a possession movie rather than a Ms. 45 rape-revenge flick, as in the cut version, it seems like the thief escapes, then 'turns into ghostly whispers' as I put in in 2011. In the uncut version, we see her take the iron and beating the thief/rapist to death with it, hence her hiding it aftwerwards. We also see her landlady coming up to see what all the commotion is about, and in the process, saying the main character's name-Audrey. FINALLY! I spent the entirety of my review calling her Woman because as far as I could tell, her name is never uttered once. 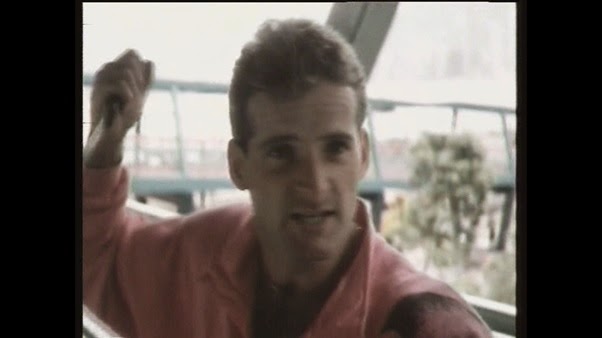 More uncut footage has Audrey hiding the body (for God's sake, these German distributors must have been pussies! 2001: A Space Oddysey is rated G, and it has more graphic stuff on display than this movie has when uncut!)

The next excised scene has Audrey dismembering the thief's body. Remember how in my original review, I mention certain scenes that are in negative coulour for no reason? Same applies for this, and here, it's reminding me of the Crazy Fat Ethel movies. 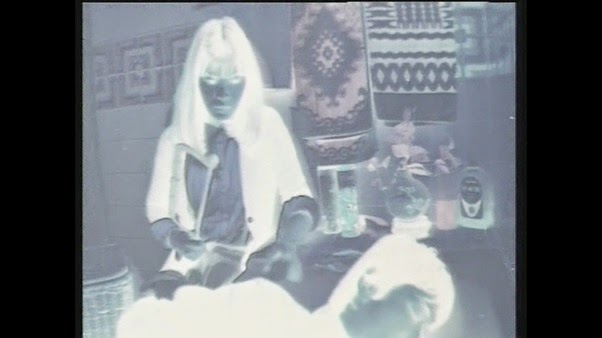 I'll just quickly go over the rest of the 'extensions' to Movie A here. There are no quick cuts away when people get shot, and in the cut version, there are several scenes of Audrey throwing shopping in the trash for no reason. But in the uncut DVD, we know that she's disposing of a body. Doesn't make the film feel any less aimless and dull though.

Now finally, we come to the excised Pierre Kirby footage! YES! The years of waiting are finally over!

These scenes are badass! Pierre Kirby not only proves himself to be my second favourite action hero with just a scant seven minutes of fighting at most, but his karate moves are a sight to behold as well. They're pretty cool, and impressive too. 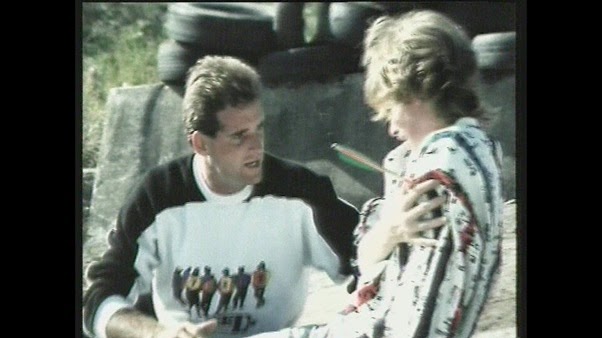 I imagine this came once the ninja boom died, so instead of multi-coloured samurai, it's instead about a bunch of people in regular clothes beating the shit out of each-other. Kinda dull compared to neon pink and fleuro yellow ninjas, but it hardly matters.

There's one particularly goofy moment during the fight with some guy, and Paul John Stanners (who I sorta mistook for playing another character last time), where Kirby throws hay, fucking HAY at some guy, and it throws off his aim! I am so not even kidding. Whether it be deus-ex-machina acorns, or trusty berets, this is one action hero who always has the right stuff on hand to save his skin! 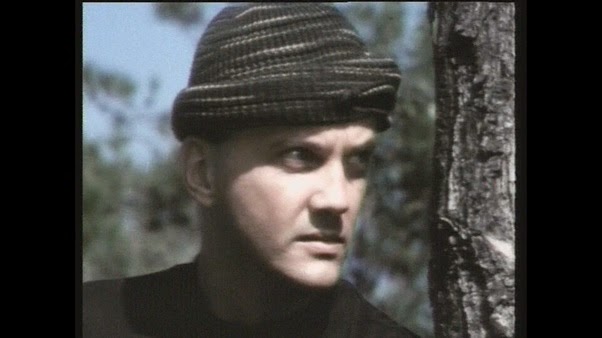 By the way, still no idea if Kirby does do a 'Six bullets or only five' routine with Edowan Bersma's villain at the end, but I swear he does! The way he looks when talking just screams Dirty Harry to me!

Movie B as a whole suffers less from excised footage than Movie A, but that's rather understandable, as Movie B is less than twenty minutes long. Dammit, Universe, you're a cruel dick!

Ultimately, there's twelve minutes of extra footage here, and it's definitely wecome for those who actually want to properly see Pierre Kirby's most elusive (technically) film. Is it worth tracking down this film for the IFD footage, despite the boring rape movie? Sure, why not. Maybe the English track does still exist, and if the movie gets enough attention, maybe the company will release a new DVD with the original English track. Though that's just wishful thinking on my part. But the guy was only in nine movies, so I really do hope that they're all complete someday. R.I.P. Pierre Kirby... 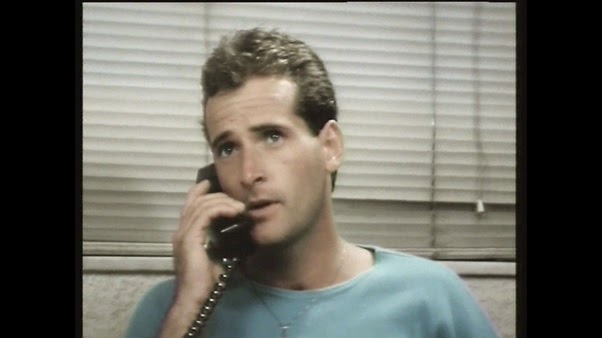 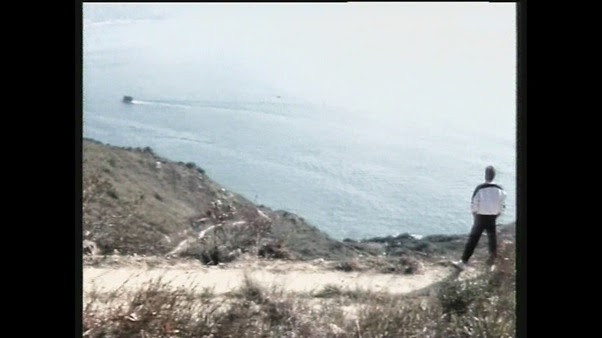