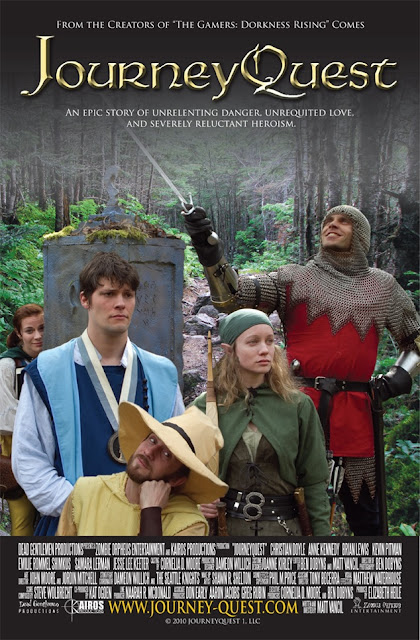 Fantasy-comedies are a rare breed in film, which is a shame. The Deathstalker films are some of my all-time favourite movies, and I always wish that there were more films like them. Thankfully, there is at least one new thing, with indie webseries JourneyQuest...

An ineffectual wizard named Superfluous, or Perf for short (Christian Doyle), tough Elven warrior Nara (Anne Kennedy Brady), deadpan cleric Carrow (Brian Lewis), and murderously enthusiastic knight Glorion (Kevin Pitman) are on a quest to the Temple of All-Dooms to find and destroy the mythical Sword of Fighting. The sword, however, chooses Perf as the fated Chosen One, destined to kill the despotic Wicked Kings who rule over the land... 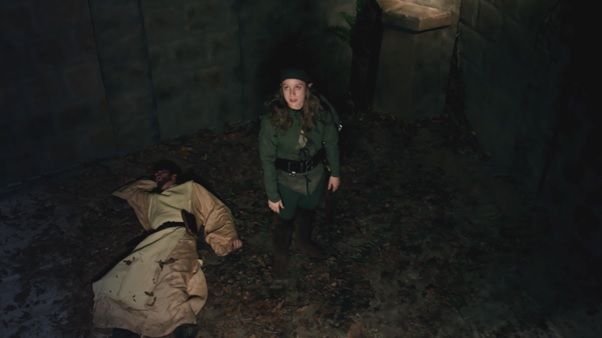 Coming for Dead Gentlemen Productions and Zombie Orpheus Entertainment, JourneyQuest is a webseries of 7 episodes that follow on from each-other, making up a 48 minute long movie. It may be relatively short, but it uses its time really well, providing a very funny fantasy adventure!

The humour is effective, and thankfully never unfunny. What comic relief there is (such as the Fighting Sword) is very funny, and the dialogue nearly had me in stitches at some points, such as with Carrow's 'return'. 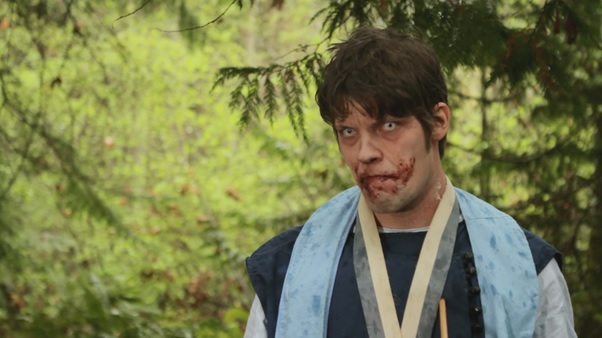 The characters are all likable and amusing enough, and their interactions are entertaining, though we know practically nothing about them (something that's lampshaded to nice effect in the next series, in a good dramatic moment). Glorion the knight is a horrid person, but thanks to the actor's performance, he's so likable! He's doltish but positive, with an always-booming outdoors voice, and while what he's done is kinda depressing, his boisterous attitude is still fun to watch.

Then there's Wren the Bard, who's basically an omniscient overlooker. Gifted with Bardic Immunity, she never interacts with the rest of the cast, for the most part, but is still very important, and while she does largely vanish from the action after the first episode, the penultimate one is a very amusing one with how it ties in her peripheral involvement with events. 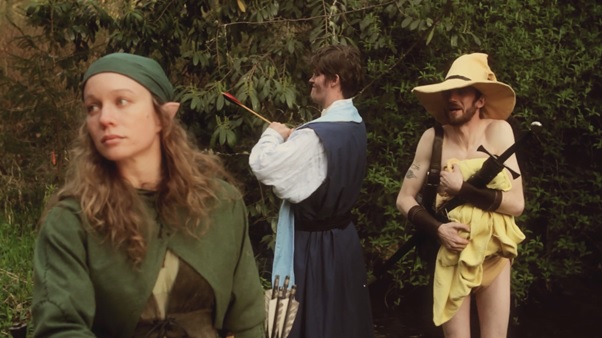 There aren't all that many villains for this story. There's the assassin who shows up near the end who works for the big bads, but until then, there are just some orcs. They're decent enough antagonists though, even if they don't really have much to do with the overall story (not counting the three surviving ones, who go on to be neat recurring additions in the next season).

The acting here is all good, and there's not one bad performance. Especially amusing and adorable is the awesomely named Emilie Rommel Shimkus as Wren the Bard. She's by far the best thing about the movie! She doesn't appear a whole lot, but she at least gets her fair share of screentime over the course of the short series. 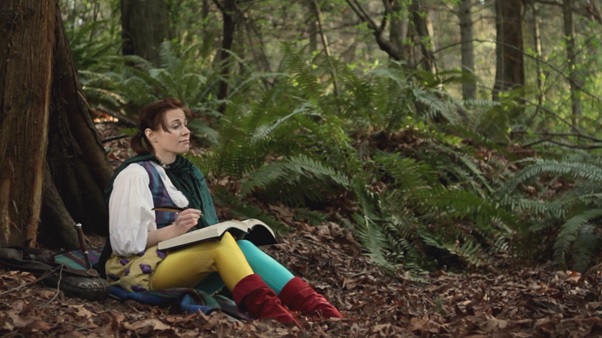 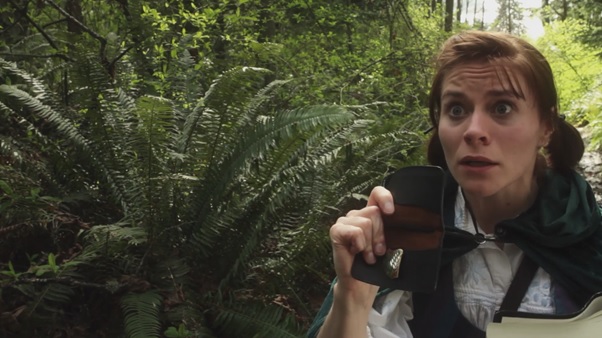 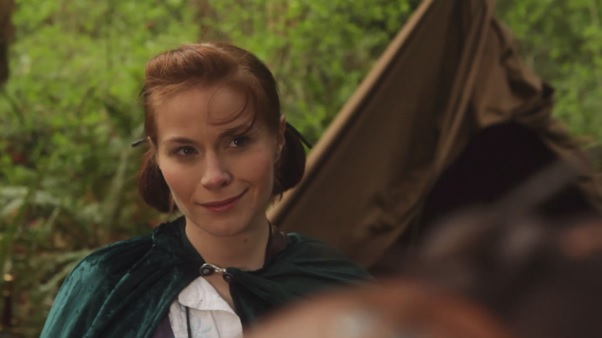 JourneyQuest is of course a low-budget series, but that's never a problem, and the proceedings never look cheap. The location (a single forest, for the most part) looks nice, and is definitely fitting for this type of story.

The effects are all convincing and well-made. The make-up for the orcs is really good! The only problem is in a couple of close-ups of them, where you can just see part of the actors' bare necks. Only just though. This isn't a full Ed Wood type gaffe, but rather just an eensy little flub that I can forgive easily enough. 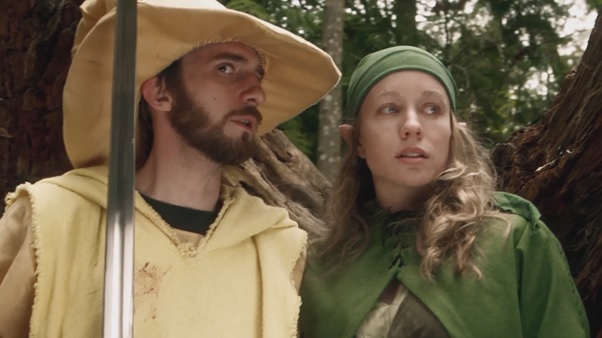 The score here is really good, with plenty of fantasy tunes, and a fun main theme!

JourneyQuest is a really good, very funny series, and I wholeheartedly recommend it!...

JourneyQuest: City of the Dead 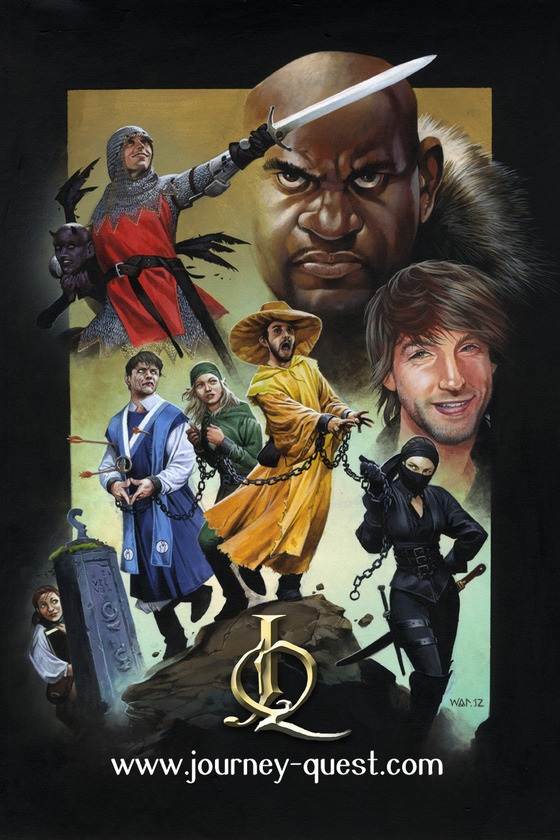 Following on from the events of the last movie, the party, minus Glorion, are being held captive by an assassin working for the Wicked Kings, and she decides to take them to the evil monarchs, going through the deadly City of the Dead to avoid being followed. Meanwhile, the Bards Guild has predicted that this quest is shaping up to be a true epic for the ages, and decide to send suave expert bard Silver Tom (Fran Kranz) to intercept Wren, and try and usurp her role in the unfolding events...

City of the Dead isn't anywhere near as good as the first film by a long shot. Its biggest problem is a mix of plot, and characters. Firstly, there's little advancement of the ongoing narrative, but even worse is that there are quite a few large stretches without certain main characters, like a lucid Nara, Carrow, and most importantly, Wren! She's only the main character! Thankfully come the last third, the party is all together again, while Wren gets the screentime she deserves. 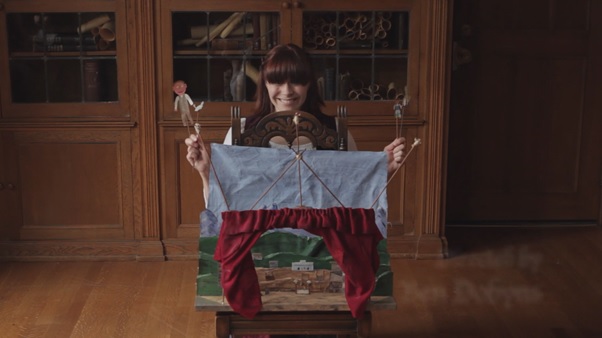 The other problem concerning the characters is that there's almost too damn many! The movie is nearly overcrowded with the sheer amount of different characters and plots. The villains aren't all that great so far either. The gestalt Wicked Kings aren't bad, but the fact that we don't even know who they are at first, or what they are makes them confusing, while the unnamed assassin lady is still around after the first season, and presumably will be in the third too, even though she really isn't that important a character! She's the kind of villain who serves to antagonize the heroes in the first act of a story, but as she has no relation to the story at all, and has no character to her, there's no point for her to be around so much. 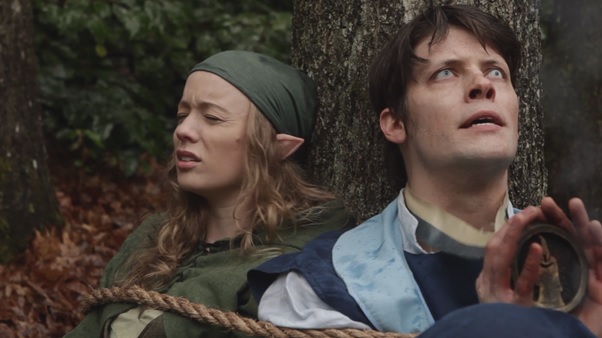 Glorion's parts of the film are silly and fun (minus the first one, which is really depressing for the 'monsters' he kills!), even if they do get in the way of the main story, but at some point, the filmmakers must have run out of the allotted budget for his scenes, as we suddenly start getting scenes of a wizard guy we've never seen before watching the events on a crystal ball, with only a voiceover from Glorion, and little immediate explanation on what the hell is now going on. I wish they would have just not had any more Glorion scenes in the Temple of All-Dooms aside from a finale, and that way, we could've gotten more with the multitude of other characters in play. Thankfully with the way this part of the movie wraps up, it's not handled poorly.

Onto the positives. Despite the problems with the plot, there are some really good scenes. Mainly the more serious character moments, these parts really help the movie, and it's awesome seeing these characters become more endearing, rather than just be cardboard cutouts. The humour is still good too, although there aren't as many laugh-out-loud moments as in the first movie.

The direction here is really good, as is the staging, and the location work (which I'll get to later) complements them perfectly! 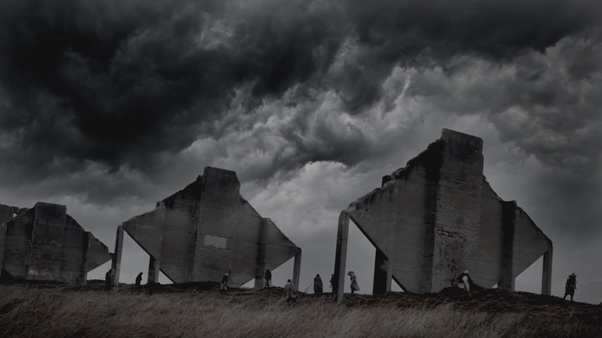 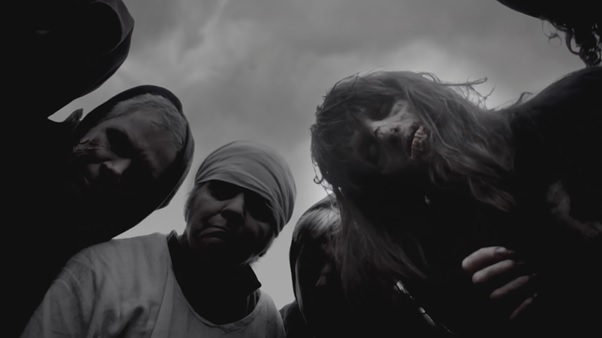 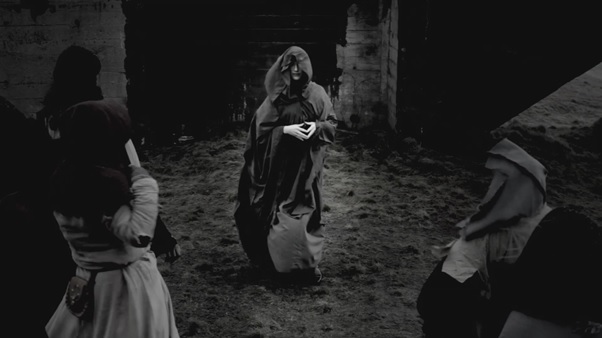 Perf starts coming more into his own by the end of the story, which is nice, while Nara is unfortunately underused for much of the first act. Carrow's storyline is well-crafted and interesting, and Death herself plays an important role with his current journey, with more to come down the road. The chieftain Karn has some amusing moments which act as a funny Conan the Barbarian parody, while the actor, Bob Sapp, does a good job at being both imposing, funny, and dramatic when the time calls for it. Semi-antagonistic Silver Tom is a fine new addition, and gives Wren someone else to interact with. The orc who ends up with the party is a decent character too, and his interactions with Perf are really helpful for both characters. Onto Glorion, I'm glad his parts of the movie have nothing to do with the main plot, because as lovable as he is, he's a horribly unlikable character, so him not making any impact on the grander story is nice. However, as he is completely superfluous to the story in every way, he's ultimately unnecessary.

Wren is once again a lovable character, and this really becomes her story (literally) to an extent this entry, and you really feel for her in her more dramatic scenes. The blossoming friendship/romance between her and the main orc (whose name I haven't caught) is nicely handled so far too! 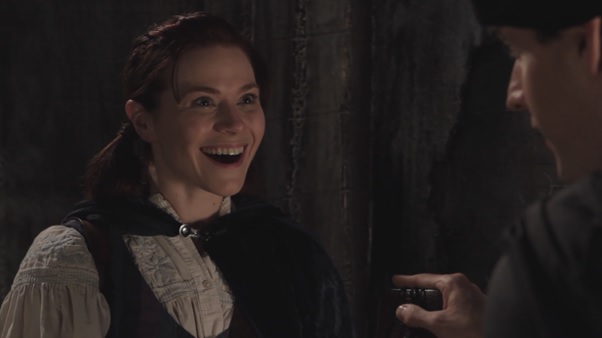 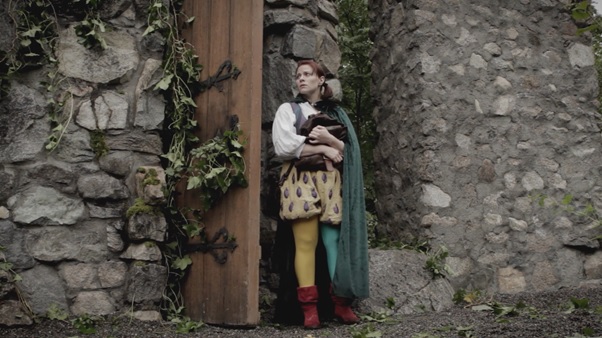 The acting is still really good, which is impressive given the size of the cast. Some are merely good, and not particularly memorable, but never bad.

The location work in this season is beautiful! Not only are there more varied locations than just a forest this time, and they never look stagey, but some of the places on display here look stunning! 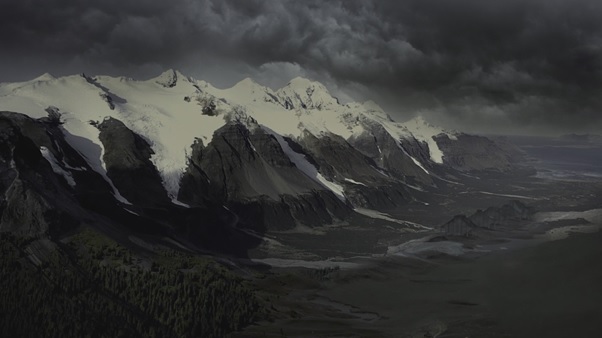 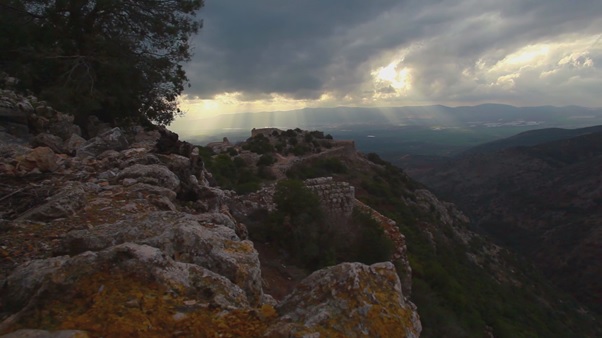 Use of CGI is still minimal. There's more than in the first season, but also more practical effects! Really the only obviously not-so-convincing computer effects are the establishing shots with Karn's tent. Everything else looks really good! The colour de-saturation for the moments in the City of the Dead look nice, and also sets the mood well. As for the practical effects, some of the more dismemberment-flavoured violence does look a bit fake (presumably knowingly so), but nothing really eye-rolling, and certainly not a problem given the low budget.

The score here is equally good as the first film's. I'm not sure how much, if any (besides the main theme of course) is recycled from the first season, but if that is the case, it's not that big an issue, as this is a webseries, and it's nice music! 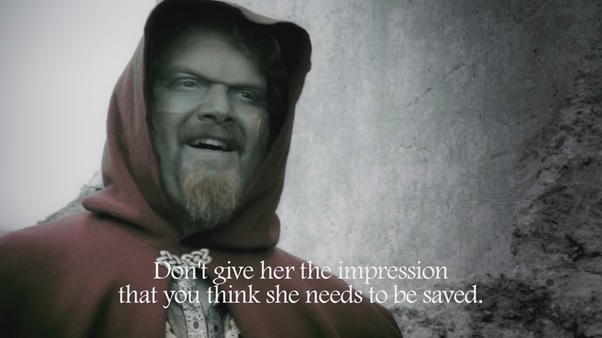 To finish, while I didn't find City of the Dead to be nearly as good as its predecessor, it does have its moments for sure, and come the end, the plot is still interesting, and I'm eager to see what's next!...

The first season of JourneyQuest came out in late 2010, and the second in late 2012. Unfortunately, Season 3 isn't yet in development, as far as I know (although there is at least one scene filmed, which is a preview at the end of the first series). Due to the size of the project, and the fact that it's totally fan-funded, the makers need help. First, there's a mailing list that they need 4200 people to subscribe to before starting a kickstarter (and it's up to 4151!). So, if you're at all interested in watching JourneyQuest, you can either see it for free on its official Youtube channel, or you can help out the creators in making a third season by purchasing the two 'movies' on the fantastic GOG.com, like I did. I highly recommend that you do if this is your kind of series, because it is a highly enjoyable and funny fantasy epic! 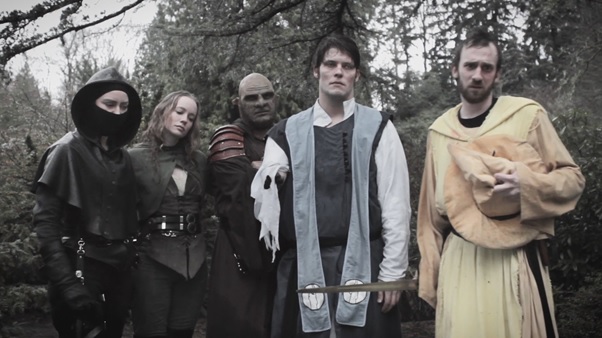