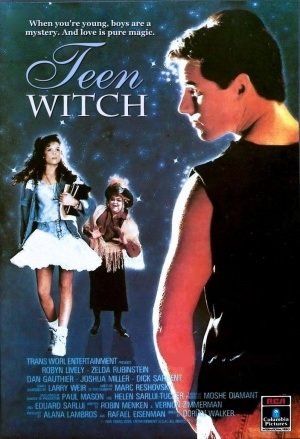 I have a confession to make...I've avoided Teen Witch for nearly six years! I got the name mixed up with a crappy movie called Teen Sorcery, and thus, despite the praise people heaped upon Teen Witch, I deliberately steered clear. What an idiot I am! It took reading a review* from Andre Dumas' amazing blog The Horror Digest to put me on the right track, and it just so happens that Teen Witch is available on Netflix! Yay!

*A review where I also got these images from, as the computer/web browser I have Netflix on is a fudging pain and not letting me take screenshots.

Newly 16 Louise Miller is feeling down. Not popular in school, and not able to be with the man of her dreams-classmate Brad. One night, though, after coming across the dwelling of palm-reader Madame Serena, she finds out that she's descended from a line of witches, and with the coming of her birthday, she'll develop magical abilities. The amoral psychic teaches Louise all about her newfound powers, and the teen comes up with a plan. Louise makes a popularity spell, and it works like a charm, but it comes at the cost of alienating her best friend Polly... 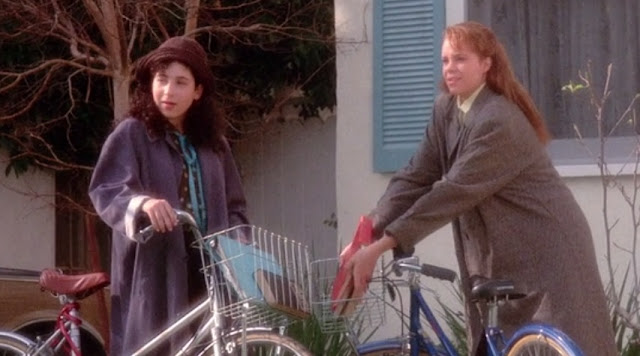 Teen Witch is a lot of fun! It's not a full-blown fantasy, and more of a typical 80's teen movie, but that's not a bad thing, although there is one pretty creepy scene! I think my readers who've seen the film know exactly which one I'm talking about!...No, not that creepy scene, the other one...

Overall, while it's a little too simple, I enjoyed the story to Teen Witch! It hits all the beats it needed to, even if I wish it had some extra scenes. I have mixed feelings about the ending though. On one hand, the story itself doesn't end badly, and I really like the ending's staging and direction! I didn't however like how we never see Louise and Polly reconcile! I'm sure it happened at some point offscreen, but it still sucks that we never see it. There are also a couple of minor plot holes with the film in general. Firstly, why are some people not affected by Louise's popularity spell?  And is her mother a witch too? She must be, but isn't. The film never addresses it. 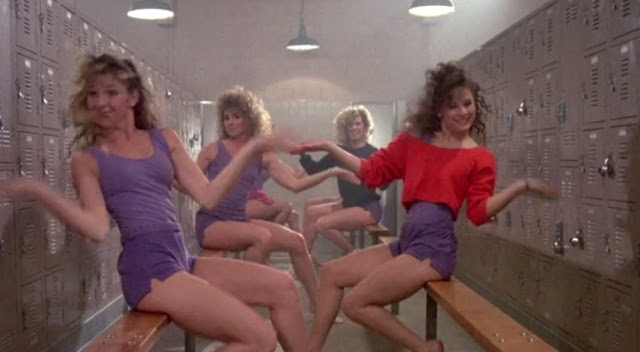 The characters in this film are definitely entertaining. School teacher Mr. Weaver is an incredible asshole, and how he still has a job after victimizing and bullying students, and stripping down in front of them, is beyond me! He's a lot of fun, and his comeuppance is really good! Also more than a little creepy.

Teen Witch's fashion is really neat, and definitely a product of its time, adding a lot of colour and flavour to the movie. The whole film is directed pretty well, with some really great-looking scenes, with nice use of colour. And speaking of colour, What is with Mr. Weaver's abstract black hole of a classroom?!

The acting in Teen Witch is good all-round. Robyn Lively is a fine lead, and it's great seeing Zelda Rubinstein in a main role! I've only ever seen her in minor parts, and yes, that does mean I've still never watched Poltergeist. 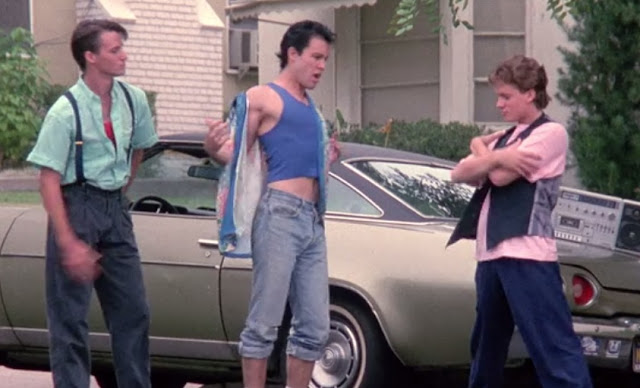 Amanda Ingber is really good as the spunky best friend, while Joshua John Miller is amusingly over-the-top as Richie, the little brother who's always eating, and talks like he's stepped out from the 1940's. Dan Gauthier is decent as the hunky costar, and everyone else in the film is fine, whether they're also over-the-top, or normal, from Marcia Wallace, to the Other Darrin, and Shelley Berman.

This movie's soundtrack is definitely rockin'! Not only are there fun jazzy 80's pop-rock songs here and there, but also some semi-musical numbers, including the famous/infamous Top That rap scene, which is...definitely something! I Like Boys is gloriously silly and amusing, and scenes like it really add something to Teen Witch that makes it that much more unique than other teen flicks. The movie's dance choreography is quite good, too, from the aforementioned locker room extravaganza, to the ending!

One last thing to note is this movie's connection to Teen Wolf. It has nothing to do with it, minus the same kind of title, which the creators tried to capitalize a bit, to the point of using the same title font on some posters. Aside from a couple of similar plot beats, the two films aren't alike. But then again, Teen Wolf does have that beach Boys scene, and it too has an uncomfortable offscreen sex scene, so you know what, maybe the two films are similar...

I highly recommend Teen Witch if you're into girl-centric teen films, particularly those of time gone by. This is heaps of fun! You know what else is a lot of fun? The Horror Digest! Andre Dumas recently posted a great review of Teen Witch, and I'll link it below.
http://horrordigest.blogspot.com.au/2016/02/umm-teen-witch-you-guys.html

This post is for The Shortening, a blogathon set up by Emily of  The Deadly Dolls House of Horror Nonsense.
Posted by Chris Hewson at 8:17 AM