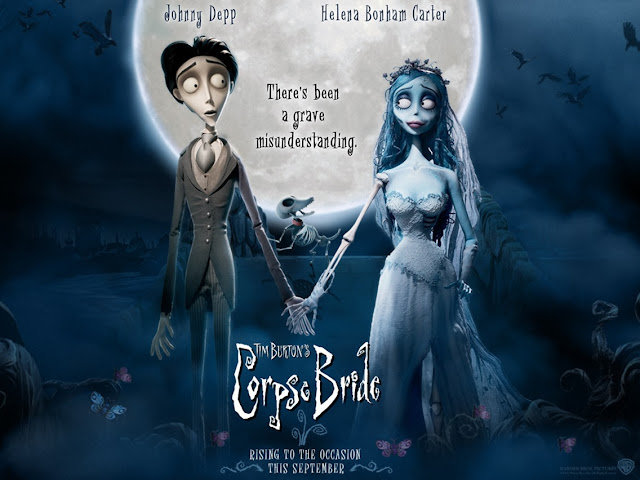 The awesome Holly of Holly's Horrorland and Emma of Little Gothic Horrors are hosting the Tim Burton Blog Bash, and I thought it would be a good opportunity to finally get around to watching his 2005 effort Corpse Bride. Better late than never, I suppose!... 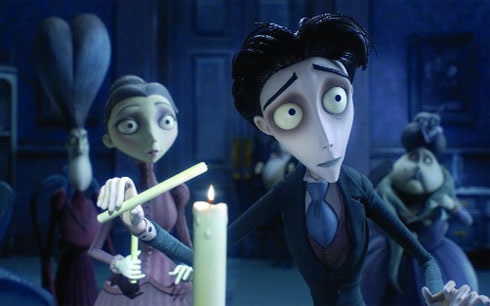 In a small Victorian village, clumsy and awkward Victor has been arranged to marry Victoria, the meek daughter of two nefarious and unscrupulous aristocrats, whose only interest in the marriage is the money they hope to get from it, so they can restore their penniless family to past glories. The two young lovers hit it off, falling for each-other fast, but after failing to remember his vows during a disastrous wedding rehearsal, Victor goes out into the deep dark woods, where he practices, finally getting his vows right...and inadvertently proposing to an undead bride, who accepts. Victor is dragged to the underworld, and has to figure out how to get out of the sticky situation he's found himself in before he's stuck in the land of the dead forever...

Coming from the guy responsible for The Nightmare Before Christmas, Corpse Bride is an enjoyable Gothic romp, and exactly what you'd expect from Tim Burton when he's actually making good movies. The plot is inventive, even if some elements and characters are predictable and a bit cliched, and it culminates in a great climax, with lovely visuals. 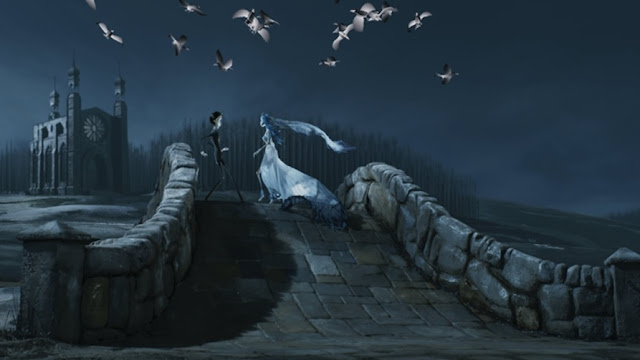 At only 78 minutes long, Corpse Bride is short and sweet. On one hand, I wish the movie was longer, particularly so we could have more character interaction, and so there'd actually be a friggin denouement! But then again, I do like shorter films, and I also admire the fact that the creators knew the story they were telling would only fill out so much time, and decided to keep it short, rather than try and extend it longer, possibly compromising the experience. Not that I think that would've happened if the movie was 90 minutes though, nor do I actually think that's the reason for the length. It might be a reason, but I have a pretty good idea that it's because the studio didn't want to spend any more money on the very costly and time consuming stop-motion than they already had. Figures. *sigh*

The Danny Elfman soundtrack is very good. At first I was skeptical about the idea of there being songs in a 78 minute long movie, because it's already short enough without the plot being repeatedly interrupted for several minutes, but thankfully the musical numbers aren't intrusive, nor do they take away much from the movie. 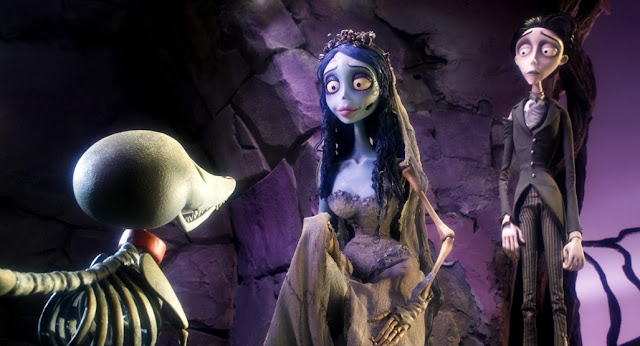 Corpse Bride is of course animated through stop motion effects, and looks wonderful, and highly detailed. The film has a neat look to it, what with the surface world of the living being drab and muted, while the land of the dead is vibrant and colourful. The characters all look distinctive, both the living and the dead, especially the latter party, and far from being lifeless or dead-eyed, the character models give off lots of life...or lack thereof in some cases!... 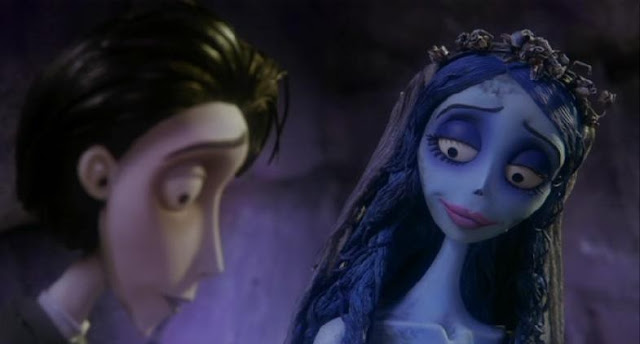 The acting here is quite good, which is surprising considering I just barely tolerate the two lead actors at the best of times. Probably the only reason I could stand Johnny Depp was that I kept forgetting it even was him. Helena Bonham Carter is entertaining, and Emily Watson's character is a bit milquetoast, at least compared to the titular corpse bride, but she plays the role well. The rest of the cast is superb, with actors like Michael Gough, Christopher Lee, Albert Finney, and more giving fine performances.

I definitely recommend Corpse Bride! It's a fun little film, and darkly gorgeous to boot!...
Posted by Chris Hewson at 2:00 AM