One of these days I'm gonna talk about Brad Jones (aka The Cinema Snob), because I've got a LOT to say! For now, I'll be discussing the Dark Maze Studios (now Neon Harbour Entertainment) comedy webseries Ninja the Mission Force!...

The Evil Ninja Empire, led by Bruce (Brad Jones), have set their eyes on the Avian ninja warriors, mystical items that grant the user incredible powers once all six are found. Opposing them is Interpol agent and ninja Gordon (Ed Glaser), with the help of his various friends (Brandon Lee, Ernest Borgnine, John Travolta, Charles Bronson, Richard Harrison, and more). Gordon finds himself battling against cheese ninjas, science ninjas, space ninjas, and other assorted dastardly schemes as the two forces fight for ultimate ninja supremacy... 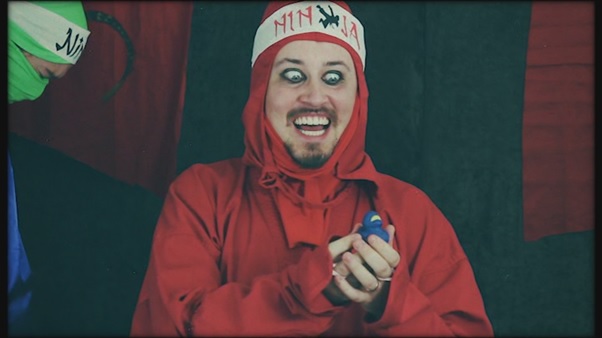 Created by Ed Glaser, Brad Jones, and Meagan Rachelle, Ninja the Mission Force is inspired by the IFD ninja flicks, courtesy of Hong Kong filmmaker Godfrey Ho. He'd snatch up unreleased or unfinished films, film around 20 minutes of extra footage with Caucasian actors to appeal to the Western market, usually centreing on ninjas (and later commandos or police, once ninjas started 'going out of fashion' (As if such a thing could happen!)). These two separate entities would be stitched together pretty unconvincingly, thanks to overdubbing, and convenient phone conversations (These characters are totally in the same movie, trust us!). The IFD movies have developed a big cult following on the internet. One of the greatest stars of these was Pierre Kirby, who I've discussed before, and most certainly will again. Ninja the Mission Force uses footage from public domain movies such as Laser Mission, Cold Sweat, Night of the Living Dead, Planet of the Dinosaurs, Street Fighter (the Sonny Chiba one), and more. 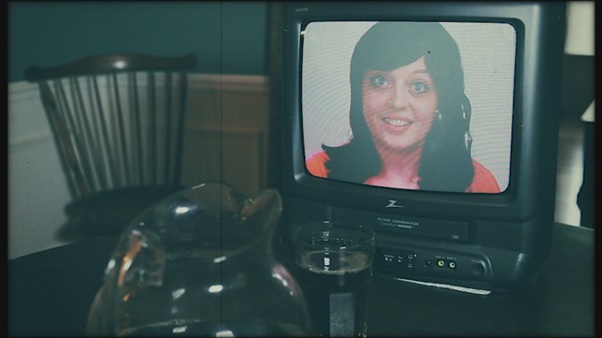 While I enjoyed it more on original release, I'm sad to say I didn't really enjoy Ninja the Mission Force much at all this time round!

I hesitate to say the creators missed the point, because I know beyond a shadow of a doubt that Glaser and co. understand the 'source material' perfectly, but it doesn't feel like it when watching Ninja the Mission Force. The reason those movies are so amusing is because despite how outlandish things may get, they're still taken completely seriously, and play everything straight, whereas this series is just completely farcical. Seeing ninjas fighting with balloons, frisbees, sticky hand toys, and flying gerbil plushies on string aren't the kinds of things I'd want to see in an IFD inspired production. Plus, an unfortunate side-effect to the overt goofiness is that it robs the proceedings of as much humour as there should've been during moments like the Garfield phone, which is genuinely funny, and faithful to those old movies. If we only saw outlandish stuff happening every now and then, it'd be way funnier whenever Ninja Gordon cracks out his amazing telephone, for example. Quality, not quantity.

As for the quality of writing itself, it varies. The main stuff is usually fun, though too silly for my tastes, but the overdubbed sections didn't impress me much. I didn't feel the writing was all that great, sometimes borderline bad, and didn't fit the footage at all...No, I don't mean like that. Obviously this absurd dialogue didn't originally go with, say, The Stranger, but sometimes it's so mismatched that it's just a bit annoying, and doesn't really work, like extended pauses because the original actors weren't speaking, or laughs when they were totally serious, and other irksome details. Yeah, that's probably deliberate and meant to be funny, but I didn't find it all that amusing, and it feels like a better job could've been done in some spots finding footage that the dialogue would go into easier, or altering the dialogue to fit better. Sometimes what's going on is just so goofy or stupid that it doesn't mesh with the otherwise normal proceedings in the original movies used. 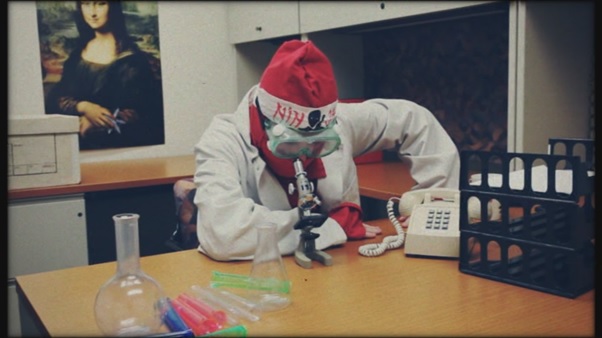 What really bugs me is that the majority of each episode is the overdubbed movie footage. Yeah, it's to emulate the IFD movies, which did the same thing, but do you know what the least interesting parts of those films are? The Movie A segments! The Movie B parts (the added-on ones) are the fun and noteworthy parts, which inspired this series in the first place. Thankfully in the case of Ninja the Mission Force, the episodes are only around 10 to 15 minutes long, and thus don't drag as much as the Movie A footage can in actual Godfrey Ho movies, but they're still an annoying distraction. What's worse is that at such a short length, too little of these other movies are shown, making their usage feel disjointed and abrupt. The two worst cases of this are the Space Ninja in Space episode (which uses only around 6 minutes from the over-two-hour-long Star Odyssey), and the mostly painfully unfunny Christmas special (a bonus episode on the DVD). That one at least integrates the footage from Santa Claus Conquers the Martians into the main story rather than having it be a separate tangentially related plot, but it's still not integrated well, since again, so little of the movie is used, they might as well have used nothing. 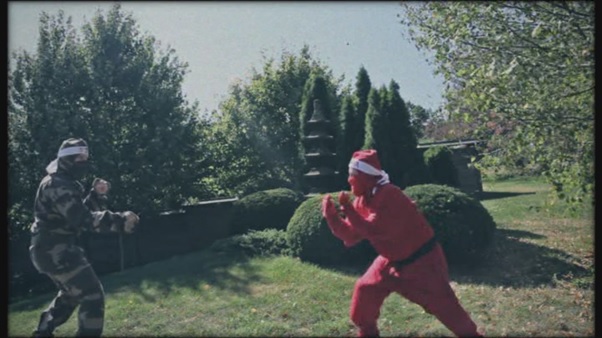 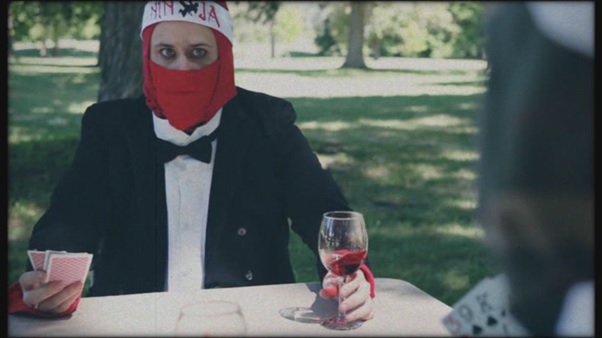 Onto more positive aspects, the humour is funny at times, with amusing lines like "This encyclopedia salesmen threat smacks of the evil machinations only the Evil Ninja Empire could...organize", "Prejudiced ninja biologists! The worst kind!", "Heartless ninja bastard!"  and of course the most often used "What's a ninja?"-"They're a fairytale. They don't exist.", usually spoken before or after blatant discussing of ninjas.  some of the ideas and moments are hilarious, like the television nature of Gordon's wife (the ending to Ninja Virus is great!), or the golden exchange of "Gordon, I need you to go into space"-"Ok, I will". There are also some really neat visuals, like the above ninja biologist. 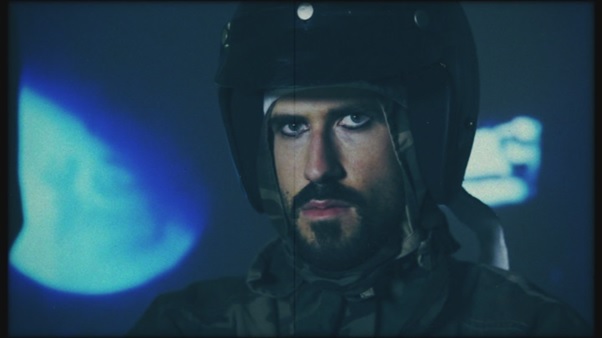 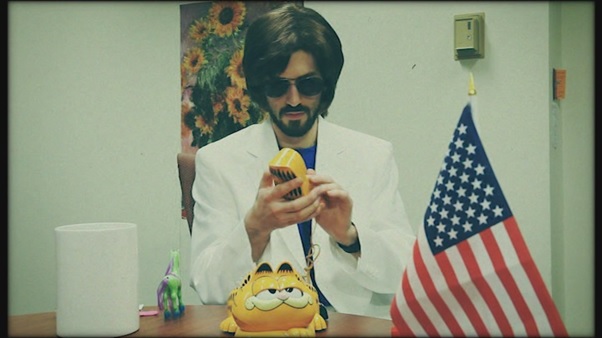 The acting is a mixed bag. Glaser and Jones are great in their main roles, as is Meagan Rachelle's voice acting and Sarah Lewis' visual performance as Gordon's wife, but the problem I have is the other voice actors, or rather lack thereof. In the overdubbed movie segments, it's always just Glaser and Rachelle, over and over again, and it's a little annoying when almost every single character in the whole series sounds the same. Also, some of said voices are more annoying than others, with the most grating being in Ninja Virus, which uses footage from Boy in the Plastic Bubble (Yes, really!).

The scoring is pretty fun, from the main theme, to the action piece that always plays during fight scenes. It's pretty repetitive, as we hear the same couple of tracks again and again each episode, but they are only short installments, and of a web-series too, so I'm not complaining.

In closing, Ninja the mission Force is a mixed bag, sometimes leaning more to the negative side, but if you're into really goofy Z-grade parodies, then I might recommend it.You could check out the trailer to see if it's your cup of tea or not... 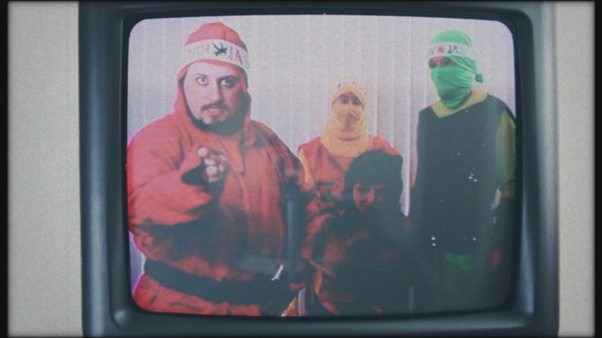 By the way, I may as well talk about this here. You see the Garfield phone above? That's of course inspired by the use of such an amazing phone in Ninja Terminator, and other such IFD flicks, where the serious and straightlaced hero used this goofy novelty phone. As you can imagine, I wanted such a phone! I searched for one for the better part of five years! I only finally procured one earlier this year with the help of my blog friend Justine, and it's just as amazing as you'd expect!...
Posted by Chris Hewson at 9:00 PM