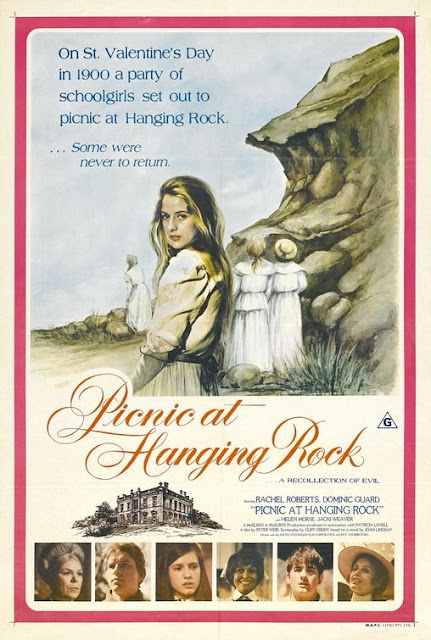 I'm going back to Australian cinema for this review, which is always something I'm up for! Too many films are American! The subject in question is the 1975 adaptation of Joan Lindsay's book Picnic at Hanging Rock... 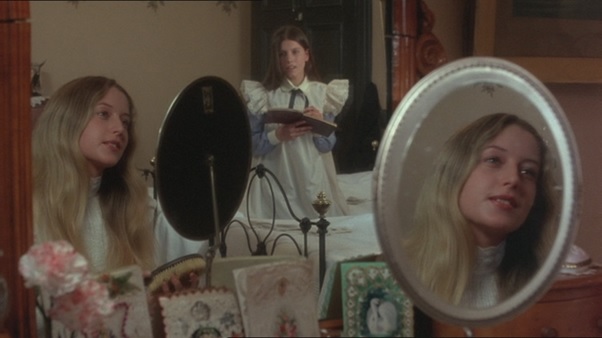 On Valentine's Day 1900, the students of Miss Appleyard's School for Girls go on an excursion to the area of Mount Macedon, nearby the ancient natural formation known as Hanging Rock. Despite warnings to stay away from the dangerous and craggy mountain, four girls led by the alluring and mysterious Miranda go anyway. After a few hours, something unexplainable happens, and three of the girls go missing, and the other runs away screaming. Searches are undertaken by the police, as well as locals, but nothing can be found, and the girls remain lost, along with one of their teachers. A young aristocrat from Britain who feels an emotional attachment to the case tries, with some luck, but not enough to solve the mystery, which might stay such forever... 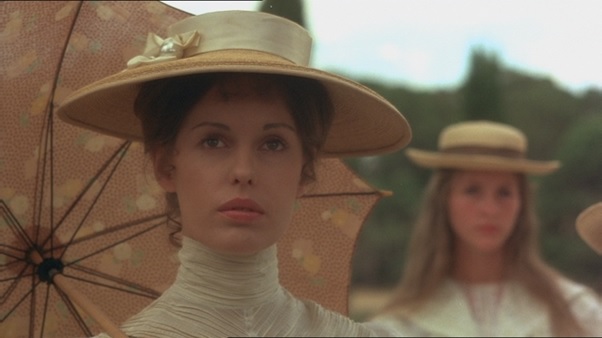 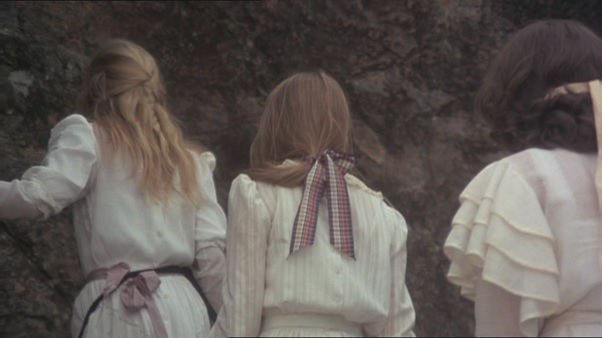 There aren't that many movies where I've discuss the score before I do the story or other such elements, but in this case, it's justified. The iconic soundtrack in this film is definitely something special, particularly the pan pipe music courtesy of Gheorghe Zamfir. The score is beautiful, yet eerie, and really makes the movie, along with the weird noises  Unfortunately the two big pieces of the score are repeated quite a bit, which kinda dampens their power a tad near the end.

Picnic at Hanging Rock has often been misunderstoof as a true story. It isn't, but it's not hard to see why people might think it is. The film is presented in a true-to-life way, especially with little touches like the text at the beginning, or the voiceover at the end. 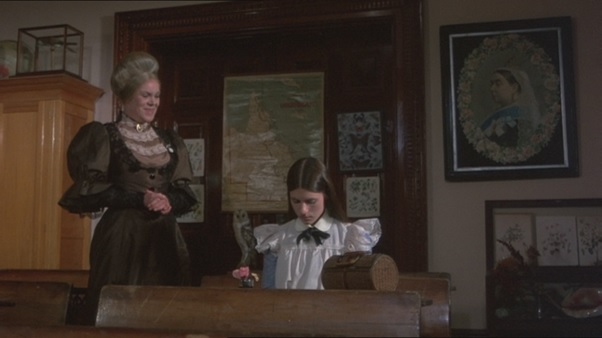 The story makes no effort to dwell on the cause of the mystery itself. Rather, the freaky things happen, no-one knows why, and we see life going on for everyone in the area. This is actually a good decision, as had the movie focused deeper into the mystery, it'd be more frustrating when it inevitably doesn't give any answers. The flipside though is that because of the somewhat lacking final half hour, the movie feels a little...listless?  Back to the positives brought about by this structural decision, there's how it makes the film feel genuine. Unlike a supposedly 'based on a true story' film that might see fit to embellish the events in order to give a narratively satisfactory answer, Picnic at Hanging Rock feels like it's accurately portraying real events, because of how it never speculates directly what the cause of the disappearances might be, or tries and give its own answer.

Another praised elenent is the character of Miranda. She barely appears, yet her character permeates the entire film. It's just a shame she and the others disappear so early on, we don't really get much time to get used to their presence and characters before they're whisked away. 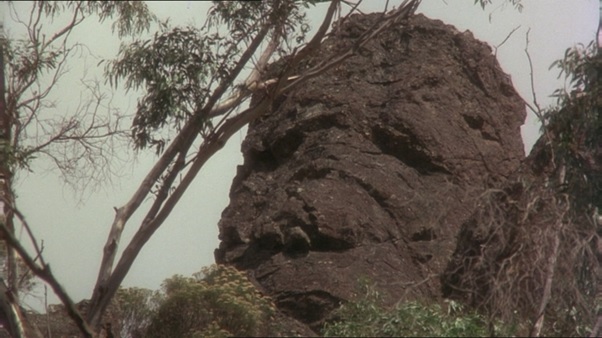 The ending is a bit weird (in a bad way) and confusing, as well as extremely abrupt. In fact, abruptness is a problem in other places too. When the three girls disappear, for example. The sky seems to turn a shade of red, and Edith runs away shrieking, while bizarre sounds are heard over the soundtrack...and then the scene almost immediately cuts to Miss Appleyard's office later that night. I wish the scene had've lingered a little longer, and transitioned less suddenly to such a different feel and location. Another annoyance is that we never see Miss McCraw's disappearance. We just hear about it after it happens. Because of this, I didn't know she was the teacher who had disappeared on my first viewing.

Another problem is the brother-sister relationship between two random characters who never meet. It just seemed like a pointless addition, since nothing came of it. I felt similarly about the sort-of lesbian subtext, which for me seemed too unexplored, resulting in it being a bit superfluous. 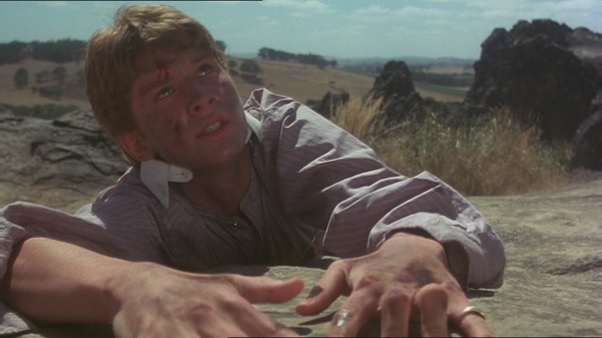 An interesting question is whether or not Picnic at Hanging Rock is a horror movie. After all, what's the base requirement of horror? That it should scare the audience, and this movie certainly does that. It's incredibly haunting and eerie. However, a lot of the story is focused on the effects the incident is having on the residents of the area, in what feels rather like a character drama. Whatever one's thoughts on the matter are, it's definitely an interesting thing to talk about, which is yet another reason the film is great! It just keeps provoking more and more different discussions about its nature.

Peter Weir's direction is fantastic! The camerawork is great already, but what really helps is the way the film was shot. Weir and crew deliberately filmed at certain times of the day when the sun shined/shone through the trees best, or by putting lace over the camera to achieve a more ethereal look to the movie.

Finally, onto the acting. It's all good, with some great performances. A lot of the performers come across like they're real people, which sells the 'true story' feel. Anne-Louis Lambert is great in her relatively small but important role as Miranda, while Dominic Guard carries large portions of the film well, as does a young Jon Jarratt. Rachel Roberts does very well as Miss Appleyard, capturing both her severe nature and also more vulnerable moments, and the very Aussie Helen Morse's French accent doesn't sound unconvincing to me, someone who doesn't speak French, nor can pick up on such subtleties, whatever that's worth. 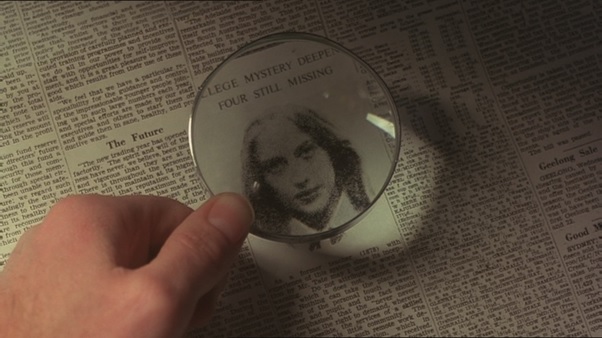 Picnic at Hanging Rock is a great example of Australian cinema, as well as low-budget cinema, and is still a revered film over 40 years on for very good reason. I wholeheartedly recommend you watch it! With luck, it'll creep you out and make you think...
Posted by Chris Hewson at 5:51 PM