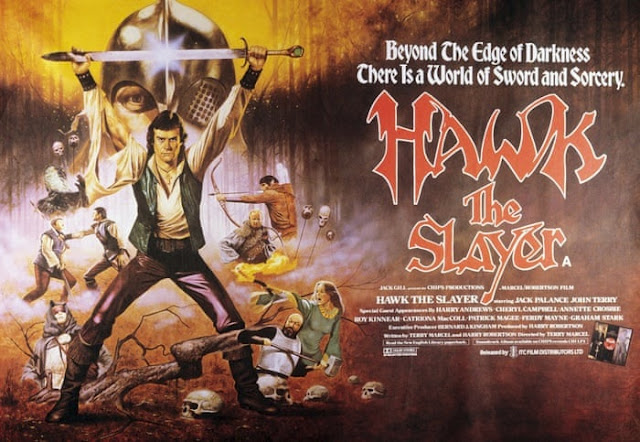 In medieval England the evil warlord Voltan, the Dark One, is pillaging through the land, killing innocents and looting towns. His latest conquest is the kidnap of a local abbess, demanding a high ransom for her return. Wanting to rescue her but unwilling to pay a ransom for fear of the long-term consequences, the church tracks down brave warrior Hawk, who has an old connection with Voltan, and is eager for revenge. Together with the help of a diverse band of fighters, Hawk must take the fight to Voltan and end his reign of evil for good... 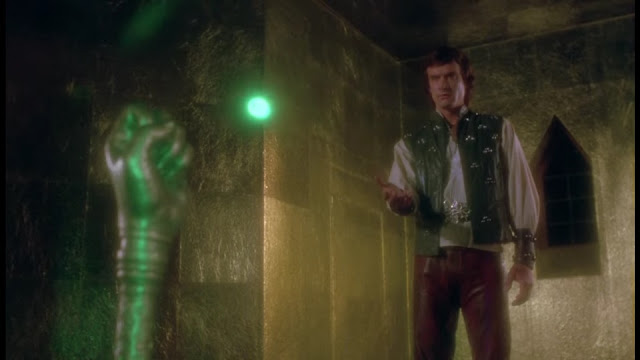 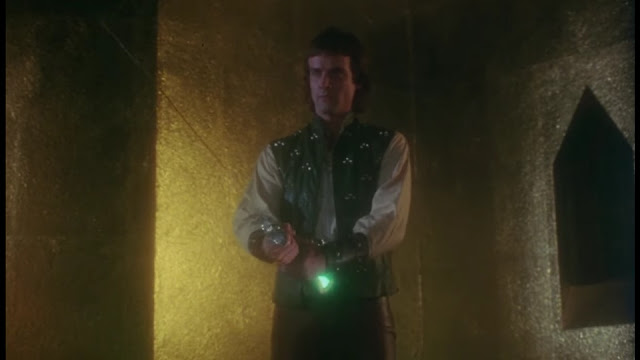 Hawk the Slayer is the ultimate in fantasy cheese from the 80s! Taking its place proudly alongside such films as Deathstalker, the Ator series, and more, it's a =. The film has always had a bit of a spotty reputation, and based on the clips I'd seen and things I'd read, I had no reason to suspect/think otherwise. However, now I've finally seen it, and can safely say that I really enjoyed myself!

The story to Hawk the Slayer is pretty traditional stuff, though the convent aspect is a pretty neat one, not seen terribly often. All the expected cliches are amusing to see, and the story's never lazy, with nice developments, and good foreshadowing.

Something I like about the story is how small-scale it is. When you boil it down it's just about defusing a hostage situation with one nun. Epic fantasy plots are great, but it's also nice when a movie knows when to keep things small. Not every story needs to be the biggest thing ever, and it's good sometimes seeing a smaller story that's treated with just as much gravitas as something bigger. 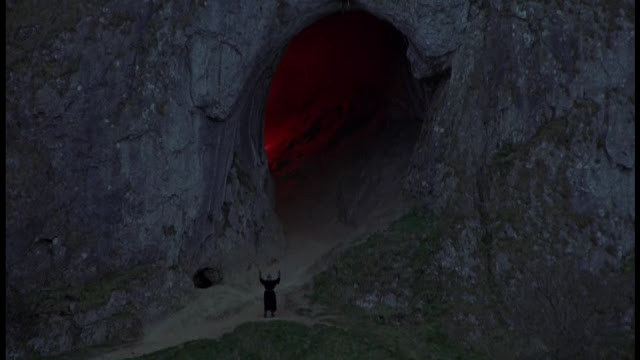 The characters here are a neat and varied bunch. Getting to the leads first, Hawk is the strong but silent type. I wish he'd have opened his gob a little bit more, but you do at least get a bit of insight into his personality, and at times his actions speak louder than words.

Voltan the Dark One is a neat villain. The relationship the two have is well-defined, simple but effective. The story we're told in flashbacks is pretty cliched, and Hawk's girlfriend could've ended the movie much earlier if she's simply stabbed Voltan then untied Hawk, but then we wouldn't have this adventure, and Hawk would be leading a much more boring life. Voltan's explosive personality and sense of entitlement gives him an interesting presence. He's furious at Hawk for 'taking away' his love, but completely ignores that he murdered her, ignoring that and putting all the blame on Hawk the Seducer. Also interesting is the side of him we see when with the mysterious evil wizard. He becomes a lot more weak and desperate, almost submissive. 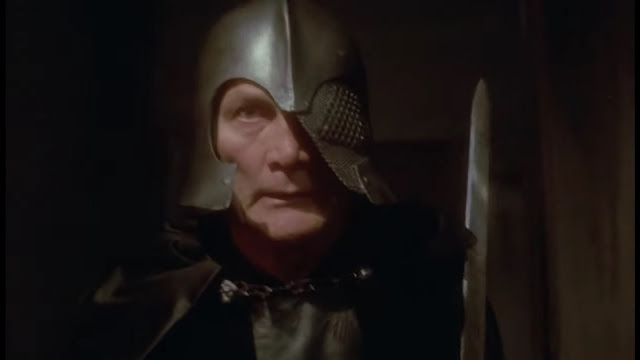 The most bizarre thing about these two brothers is the clear and obvious age difference! Jack Palance looks positively elderly (sorry Mr. Palance!), and yet he and Hawk are supposed to be siblings? Perhaps it would've been better if he was Hawk's uncle, and brother to the old man at the start of the movie. Voltan having a son Hawk's age also raises more questions, though the reveal that he's adopted does clear that up a little. Lastly, I did wonder why Voltan was American, but at least the casting of yank John Terry the hero makes that consistent. 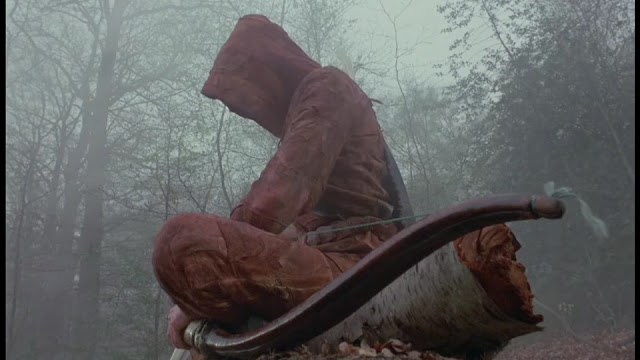 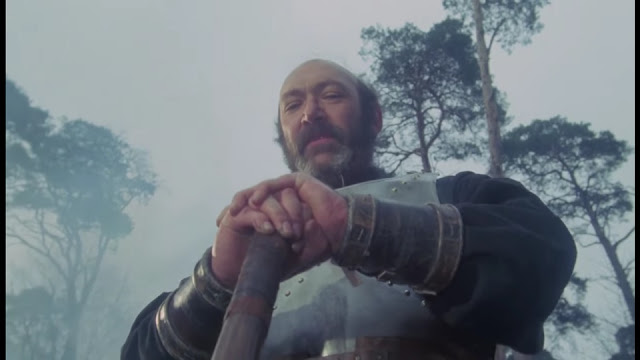 Hawk's crew consists of crippled warrior Ranulf, Crow the elf, Baldin the dwarf, Gort the giant, and an unnamed witch who Hawk simply calls 'woman'. Dude, I get she might be a bit secretive, but you can at least ask her for her bloody name! The witch is a suitably mysterious and enigmatic lady, while Gort is the more jovial and talkative bruiser of the group. Baldin is amusing enough comic relief, and serious when the time calls for it, and silent but weird Crow almost got too little to do, but had some very nice scenes later on. Ranulf is pretty neat too, but only gets to do so much when the cast is this big. Together they're a pretty overpowered bunch, but the movie knows not to make them too unstoppable. As for who makes it through the finale, some losses are very well done, but others happen very abruptly, not feeling necessary. 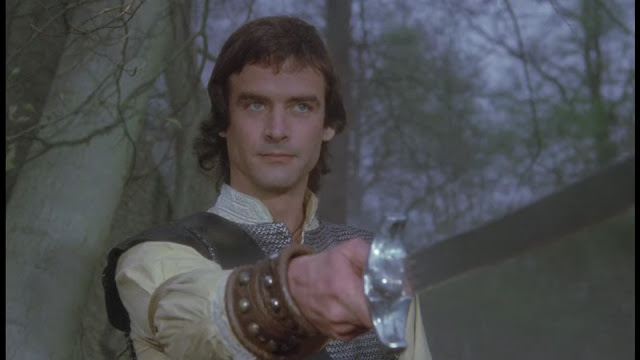 The supporting cast are decent to mixed. The abbess doesn't appear much, but is likeable, while the other head nun you can see where she's coming from but groan as you see what she does. Voltan's impetuous son Drogo is pretty ridiculous though. [He's =.] "I am no messenger. But I will give you a message...OF DEATH!". Overall, there aren't really any failures in the cast, and while it was touch and go whether there were too many, or if they were all utilised properly, none really felt superfluous. 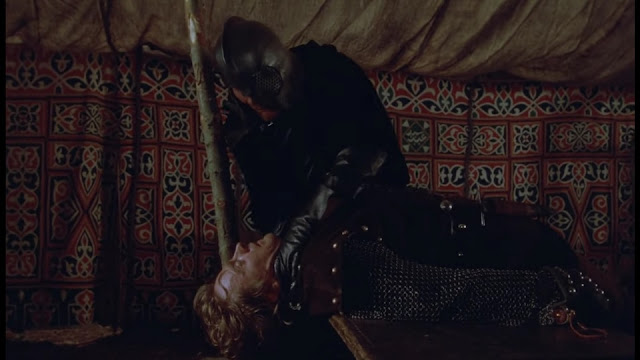 The acting here is quite varied. It ranges from effective, with both boisterous and quieter subtle performances, to a little wooden, to outright hammy! John Terry isn't a bad lead. He absolutely looks/nails the part, but while I wouldn't say he's emotionless, he could stand to show a bit more life. It would've made us care for him more, and made it seemed like Hawk cares. Then there's the great Jack Palance! How a cowboy actor from the States got cast in a British medieval fantasy is anyone's guess, but he's clearly having a lot of fun! He can get very over-the-top, laughably so in places (DROGOOOOO!!!), but he's a very distinct personality, and gives the movie a lot of character. 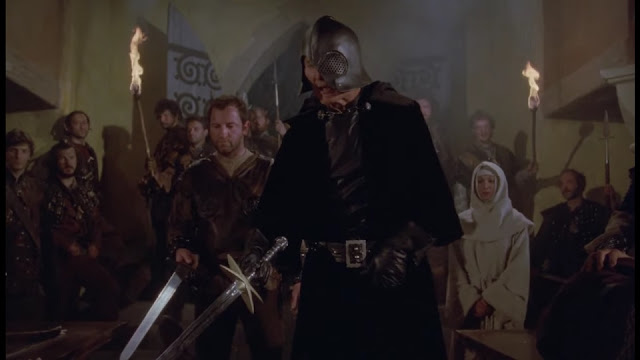 Aside from its main players, this is a who's who of British media talent, with actors/personalities like Bernard Bresslaw (getting the meatiest performance I've ever seen from the guy, delivering superbly!), Christopher Benjamin, Patricia Quinn, Roy Kinnear, Graham Stark, and more.

By far the best thing about Hawk the Slayer is the music. It has to be heard to be believed! In no other fantasy, or film period could you hear an 80s synth-pop  disco, mixed in with spaghetti western and oriental tunes! I know it sounds crazy, but the themes in this film are fantastic, and so much work has been put into them. They're cheesy at times, but in the best possible way, and never bad.

What I also really admire about the score though is that despite such an eclectic mix, it's never cluttered. The tunes are short and sweet, enough that you wish they'd last longer, but they never overstay their welcome, or sound like endless cacophonies. The western style whistles are cool, and never overused. The movie actually could've stood to use a few more in fact! 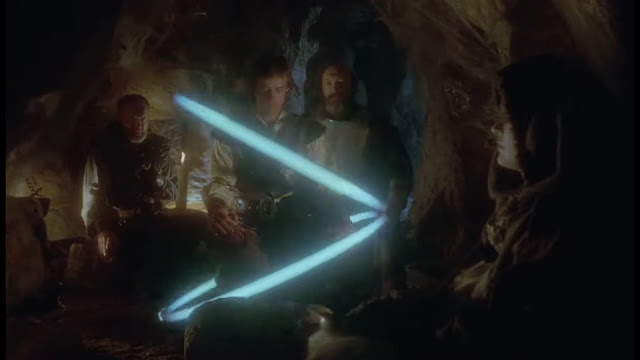 The effects are nifty. None are really bad, many are goofy, and everything convinces in the right ways. The costumes are all fun (especially Voltan's Darth Vader half-mask), the giants and dwarves/elves are suitably sized, and look decently convincing despite still being relatively human. There's plenty to see here, from flying magic swords, to lasers, floating magic circles, and more. Never a dull moment visually. That leads me into the movie's appearance. The locations are great! There's a very authentic feel to the arboreal surroundings, and I like the colour the film has. It's got a bit of medieval grime to it without looking colourless and grim. My only complaint is that the crew got a bit carried away with the fog machine in many scenes! It's like they were worried the film might look cheaper or not epic enough without a constant supply of smoke/haze. They were wrong.

The direction by Terry Marcel is quite good for the most part. Fight scenes are mostly rousing and fun, and introduction scenes and location bits are well-shot. The editing during the fight scenes can sometimes look weird though. The quick-cut effect they use to show arrows being shot superhumanly fast is cool, but it does look more like editing than anything the characters are actually doing, and the fights can get a bit chaotic at times. Some of them are also over very quickly! 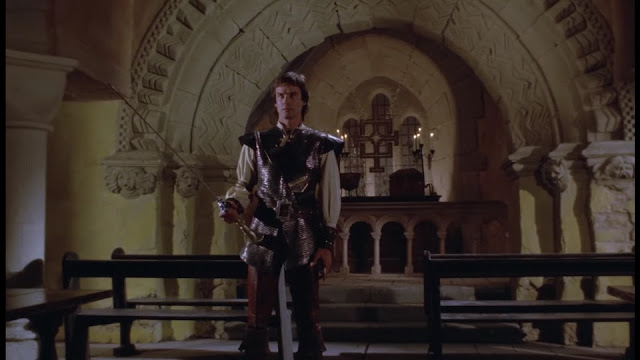 I avoided Hawk the Slayer for years because I was worried it wasn't gonna be good, but it proved me so wrong! Some might enjoy it as a so-bad-it's-good film, but to me it genuinely is good, in an endearing and fun way. It's a shame we never got a follow-up as the movie's ending teases, as that could've been an extra slice of cheese for a nice fantasy pizza! As it is, this is a great way to spend a nice evening in...
Posted by Chris Hewson at 2:29 AM