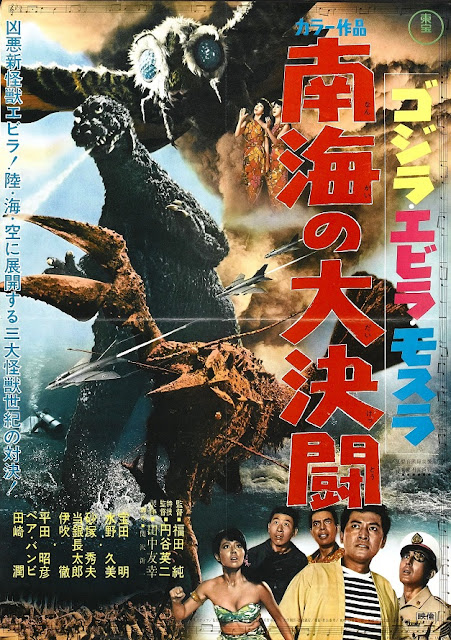 Ryota is a young man searching for his brother, believed lost at sea. A visit to a local psychic has him further convinced, so he teams up with some new friends to check out some boats. Together the trio accidentally break into a fancy yacht, and Ryota takes advantage of the opportunity and sails the ship to the South Pacific. His friends and the ships criminal owner are none too happy with this unplanned trip, but this quickly becomes secondary when the yacht is attacked and scuttled by a giant claw. They wash up on a tropical island, which turns out to be occupied by a sinister terrorist organisation, using slave labour to help create nuclear weaponry. Together with an escaped native girl, they free a sleeping Godzilla and plan on liberating the island... 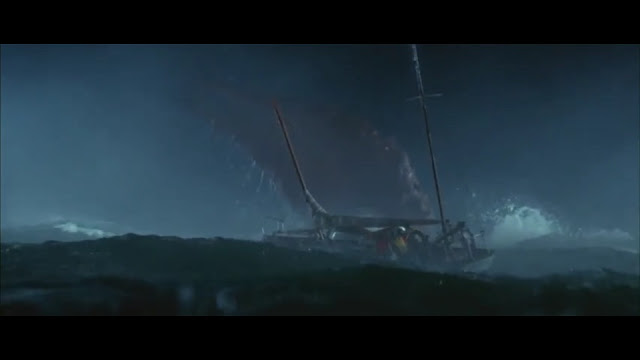 Also known as Ebirah, Horror of the Deep, Godzilla vs the Sea Monster
The plot gets off to an attention-grabbing start, with a good thrust] and the ball gets rolling very quickly. We jump from one interesting setting to another in quick succession, from a fun dance off (I wanna participate!), to an oceanic adventure, finally ending up on the island. We meet the cast early on, and are on the island quickly enough. From then on the film is quickly paced, never letting the fact that it mainly only has one setting get in the way or slow things down. 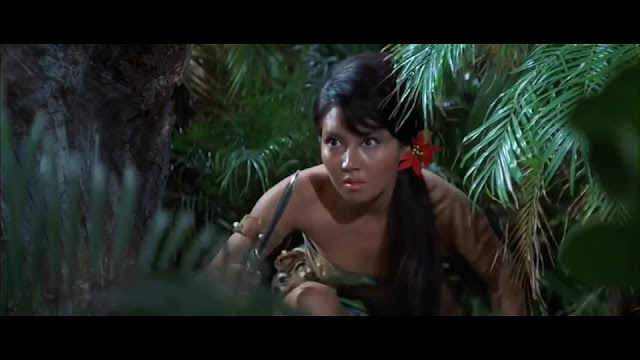 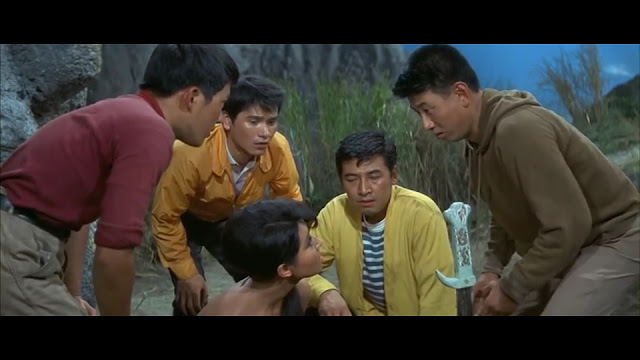 One always wonders how the human plot will fare in a monster movie. Will it be a good one that = the time well while you wait for the monsters to show up again, or will it be a punishingly long affair, where a bunch of annoying dopes hog most of the screentime that rightfully belongs to Godzilla? Godzilla vs the Sea Monster is definitely on the positive end of that spectrum. The human plot is adventurous, thrilling, and we always care for everyone involved.

There is however a ...slight problem. You wanna know how long it takes Godzilla to appear in this film? NEARLY AN HOUR/NEARLY AN HOUR! That's right, you heard me! We see brief shots of him sleeping at a few points, but he only wakes up to kick ass 52 minutes in. Thankfully when Godzilla does finally get involved, it's definitely his show. The movie doesn't skimp on the Big G when he's onscreen.

Mothra is also in this film, but she doesn't wake up until the end. On one hand this is good, as it doesn't needlessly overcrowd the film with a monster who really =. But on the other hand, It's been over an hour, Mothra, wake your lazy ass up! Your citizens need you! 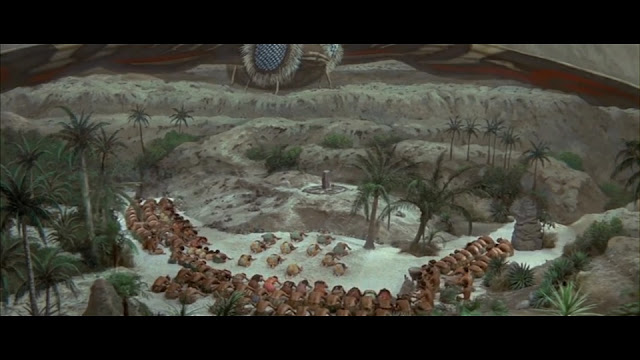 The story here is a pretty simple one, but in a good way. It knows what to focus on, and does so well. Even the ending's cheesy moral comes with an amusing and goodhearted joke about it, which also acts as payoff to an earlier line.

If I had to pick any problem with the film, it'd be that the story stalls at about an hour in. Once Godzilla's woken up, we're pretty much treated to characters running from one end of the island to another waiting for things to happen, which they do. But nothing really integral to the plot. Just = scenes such as Godzilla fighting a =, or =. All good scenes, and this is never boring or slipshod, I just kinda wish they'd been tied = a little more. 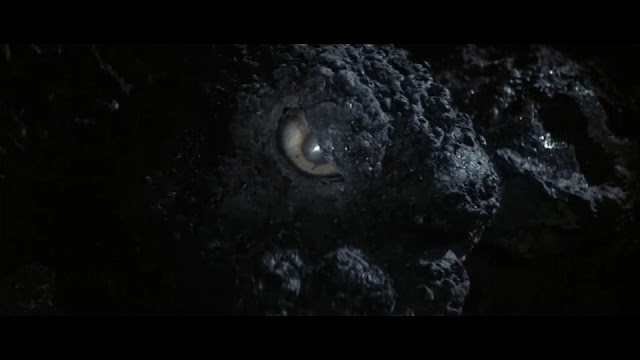 The climax is all action, and it's plenty of fun. Very thrilling, and packed with [excitement]. Something I like is how we see the insides of the buildings and underground installations as Godzilla tramples on them. Every stomp he makes threatens the slaves trapped underneath, and it makes the climax tense in an effective way. You might just be expecting the last act to be a curbstomp battle where the good guys easily win once the monster's woken up, but his carefree involvement does create new kinds of tension. 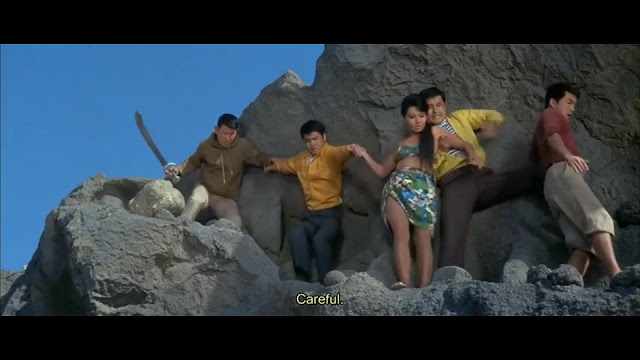 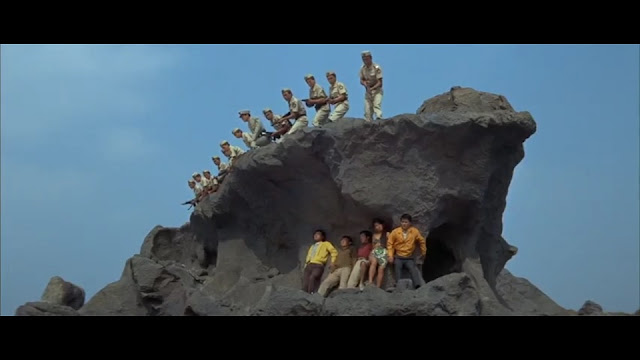 First up is the human characters  They blend together a little, since the four (later five) guys all look the same. Their clothes are really the only indicator of who's who, and how serious or goofy their faces are. Ryota is a likeable lead, noble and determined, setting the events of the plot into motion. Yoshimura is more intense, having a bit of an edge to him due to his criminal nature, but he never goes off the deep end. He shows a maturity to the situation, accepting the loss of the money quite well, and he gladly uses his skills to help the others, and immediately detests the slave-using baddies.

Ichino and Nita are good comic relief, and they contribute well too. Nita for example comes up with a great plan for the slaves when he gets captured, and boy does it pay off well! He deserves a medal. Daiyo the native girl is nice, and provides us with a different = to the others, with her gender, ethnicity, and mysticism adding lots of extra flavour to the film. 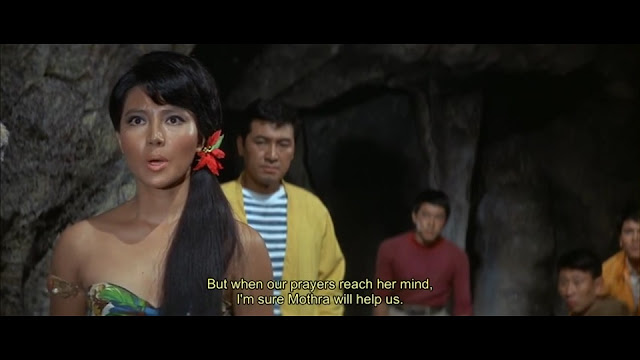 I wondered how Ryota's missing brother would play int oevents, and eventually he does turn up. I was a little afraid at first that a 6th hero would clutter things up, but then I noticed he kinda evens things out since Nita is still kidnapped at this point. Thankfully this is far enough into the movie for there to be no/little confusion, as we already know who everyone is, and no-one feels useless.

The remainder of the Orphan Island people are =, with the Fairy Twins appearing briefly to impart advice, and sing. Lastly, there are the villains of the piece are effective enough. They're not really the main focus in terms of character, and are just there to provide an obstacle, and be evil. They succeed on both fronts, and they're = and distinctive, complete with silly eyepatches! 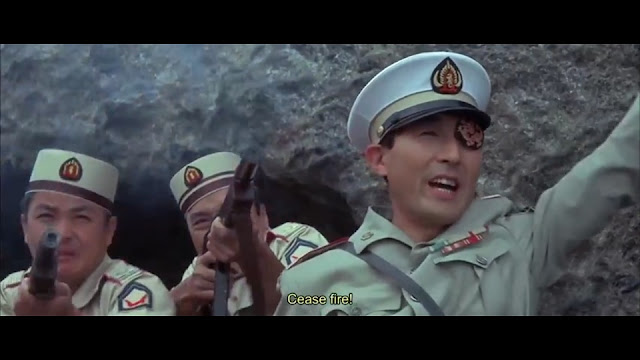 Now for the true stars of the picture-The monsters! Godzilla seems so far away for the longest time, but once he's here he effortlessly reminds us why he's the king of the monsters. As for his alignment, he teeters a bit. The heroes are understandably frightened of him, but while he's perhaps more neutral in regards to human life here, he's never malevolent, and he only directly harms the bad guys. Even then he probably would've left them alone if the assholes didn't attack him while he was trying to sleep! ==, I tell you! 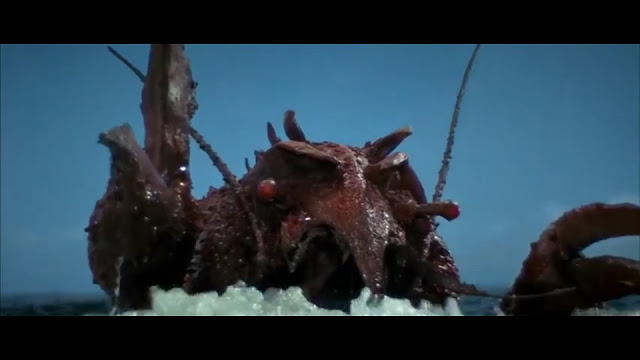 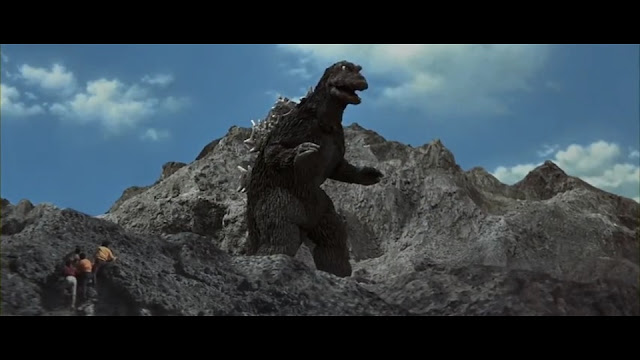 Mothra may be sleeping on the job most of the time, but the culture of her islanders help build up a nice aura around her and her abilities. Ebirah is a nice new villain, despite his limited time, but he's mainly just a flunky for the bad guys,

The tone of Godzilla vs the Sea Monster is an effective one. The film isn't farcical, but it's also never entirely serious too. It strikes a really good balance where it treats the events =, but never forgets that it's supposed to be fun. From the neat soundtrack, to the opening dance off, and the brawling monsters, this is a lighthearted adventure =. 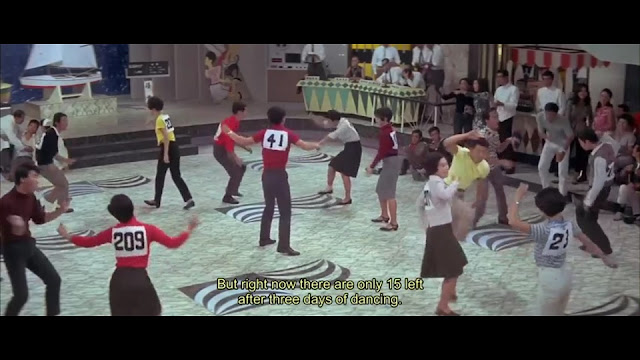 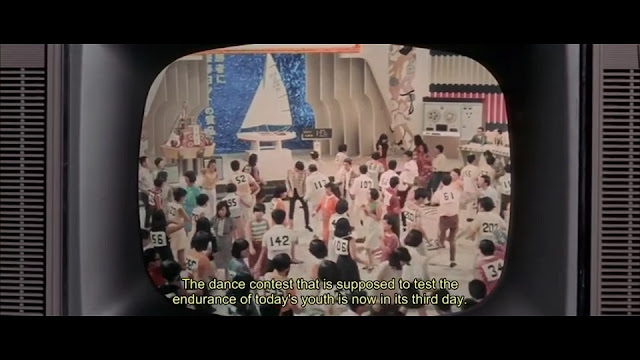 The soundtrack here is awesome! All throughout the film we get these groovetacular beats! Whoever had the inspiration to have disco and funk music in a Godzilla film had a strange idea, but a very successful one. The music adds so much to the enjoyment of this movie.

The cinematography and direction in Godzilla vs the Sea Monster is superb! The production is shot on location inthe South Pacific, and not only is this already an easy opportunity to get some great shots, the director and crew here really did their work, and get some beautiful moments on film, especially with sunset. The monster fights are all staged well. Some of the shots  also look surprisingly modern too! They look like something out of a 1980s Godzilla flick, with the = and level of detail. 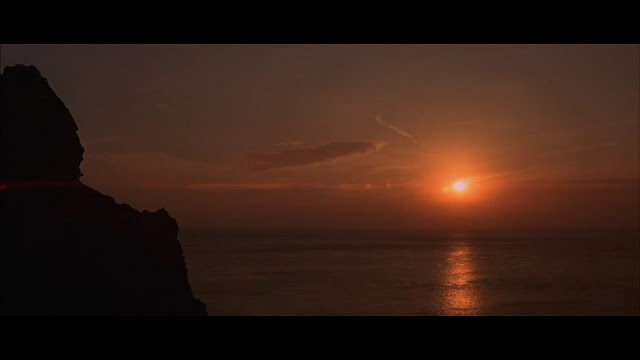 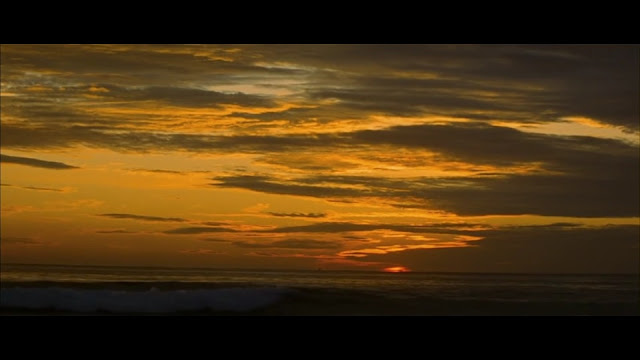 The effects here are great! We've got plenty of nice miniatures, a few giant monsters, and =! Starting with the kaiju, Godzilla is very good. He's a good mix between scary and =, without looking too goofy or comical. Mothra meanwhile is very pretty and elegant, charming the audience despite her limited screentime. Ebirah also looks good,    The miniature buildings are all great, and =, as do the artificial bits of the island. There's a good integration between the fake and real island, and the ending cataclysm impresses. The effects aren't perfect, mind you, as there are some amusingly fake dolls here and there, but that's no big issue. Where the film really impressed me was its attempt at an underwater fight scene! It's not the clearest, nor the most animated of fights, but it's not bad, and I applaud the effort!

The actors here all do good jobs. While there wasn't much to distinguish them visually from one another, they don't act the same, and they do a good job with the material they're given, working hand in hand with the good story to give life to the film. 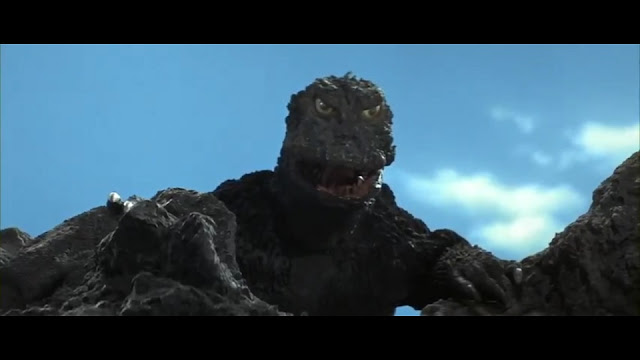 Godzilla vs the Sea Monster may not have any expert social commentary, nor is it one of the more serious and dark entries in the series, and it may not even feature the titular kaiju that much, but it's one of the best in the series I've seen so far. It's pure fun from beginning to end, and well worth a watch!...