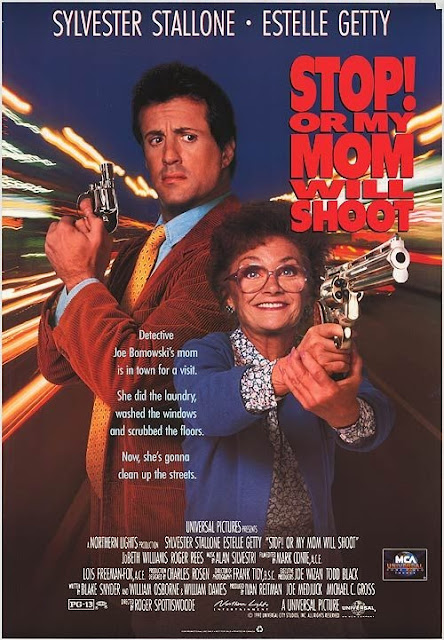 In the annals of cinema, there are some movies spoken of in hushed tones of dread, notorious for their terrible qualities. One such film is Sylvester Stallone's Stop or my Mom Will Shoot, but is it really as bad as this reputation holds?...No, of course not! Even if this wasn't that great, I couldn't see it as being anything other than harmless fluff, as it's not mean-spirited or offensive at all. And as for Stallone's filmography, god knows he's made worse! Now let us move away from that and never speak of it again...

Sergeant Joe Bomowski is a tough cop, but his relationship is on the rocks, and he's generally unhappy. Things are made worse when his domineering mother Tutti arrives, and immediately begins meddling in his affairs. While she's often a nuisance, even destroying his gun while attempting to clean it, she slowly helps out, and things begin to improve even if Joe can't see it yet. Things take a turn for the dangerous though when Tutti is the only witness in a violent crime, and Joe must permanently babysit her, and solve this case before it's too late...

If we're to begin anywhere with Stop or My Mom Will Shoot, it's gotta be the title, which is amazing! It builds up expectations for the movie to come which are thankfully met.

This is a fun cop movie. It's cheesy for sure, with a few moments which you'll roll your eyes at, but it's never ridiculous, or just plain stupid. You always believe the movie due to how earnestly it handles the material. It never acts like everything's a big joke, but strikes a good balance of tone. Never too serious, but not farcical either.

The plot is pretty good, with it mainly being a character piece. In this regard it succeeds very well, as both Joe and his mother are well realised characters, both with their own good sides and faults. Joe is a good cop, but he leaps into some situations without thinking, and has trouble opening up and letting people in. Tutti meanwhile is too meddling and embarrassing to Joe for her own good, but often has a point, and she immediately endears herself to everyone she meets, even criminal sorts!

The grumpy police chief and the love interest are one and the same here, and she's a likeable supporting character. She slaps Joe when he deserves it, and kisses him when the audience wants some romance.
One character I appreciated was funnily enough Tutti's dog, which is in just about every scene! Pets so often get forgotten in movies, so it was quite refreshing to see that's not the case here. Little = gets to join in on a lot of the adventures! I mean, he's just there for moral support, but still!

The comedy here all works. It's often funny, never cringey or too over-the-top. Something also of note is when the title is delivered! Saying your movie's name in dialogue can often be cheesy, especially with such a goofy one. Here is no exception, but it works, is funny, and does at least makes sense in context. The weirdest part of the movie is a dream sequence partway through, which contains Sly Stallone as you've never seen him before!

If I had to pick any complaints with this movie, they'd be relatively minor, but still there. First and foremost, there's not a great deal of focus on the crime. There's the bare minimum, but I wish there'd been more investigation. Instead the movie keeps focusing on other stuff. It's all good stuff, but still. I wanted more. Because of this we keep hearing that Joe's getting too close to comfort for the crooks, but never really seeing this in action.

The other issue is just that some characters didn't appear as much as they could've. Like Joe's partner, or the mean cop Ross, who disappears almost entirely after the halfway point. This goes a little for the villains too. We never really get enough time to know 'em. They're just pretty basic. What we do get though is pretty neat, but that's about it.

Stallone plays well with comedy, handling both the badass cop moments and the comedy situations, and his attempts at romance are    Estelle Getty meanwhile is a spunky ball of fun! She's really enjoyable, steals every scene she's in, and share's great chemistry with Stallone. Heck, with everyone else too! She really sells her character's infectious nature.

JoBeth Williams is both good as a gruff police chief, and a love interest. Roger Rees is a neat villain, though his attempts at an Italian-American accent are somewhat marred by him being British. Despite this, he's effectively slimy, and a bad dude!  I only wish he appeared more. We don't see him until halfway through.

To finish, Stop, or My Mon Will Shoot might not be high art or anything, but it never tries to be. It's simply a fun  movie, that succeeds on its own terms
Posted by Chris Hewson at 5:25 AM