In the list of movie collaborations one would never suspect to be real, a buddy action movie with Christopher Lambert and Mario Van Peebles would probably rank high on the list.

Having previously appeared in Highlander III: The Final Dimension (in which van Peebles had taken a serious dose of overacting juice, as is required for playing a villain in a Highlander film (see: Michael Ironside in Highlander II: The Quickening and Bruce Payne in Highlander: Endgame)), Christopher 'Connor MacLeod' Lambert and van Peebles reunited for Gunmen.

Set in South America, Boa Vista, Gunman centres on $400 million that has been stolen from drug lord Loomis (Patrick Stewart) by Carl Servigo, an employee of Loomis's. Carl is captured and tortured to death by hired heavy Armor O'Malley ('comedian' Denis Leary) and his goons Maria (Brenda Bakke) and Java (James Chalke) before he can break his brother Dani (Lambert) out of prison. The dubious honour of breaking Dani out of jail rests on DEA agent Cole Parker (van Peebles), who takes Dani to the DEA outpost to get information on the whereabouts of the $400 million. The money was stashed by Carl on a boat, which Dani knows the location of, but nothing else, and Cole knows the name of.

Dani escapes Cole's custody and flees, winding up in a bar with a woman credited by the film as 'orgasmic hooker', which gives you an idea at where Christopher Lambert's other talents really lie. Soon recaptured, the inn is raided by Armor and his trigger-happy men, who, through the film, display an unnatural keenness in filling as many bullets as humanly possible into who they're supposed to bring in alive. Dani and Cole escape and flee into the wilderness of a nearby jungle/rainforest, where they trade hilarious banter with each other ("The boat's called the USS Nunya, Nunya damn business") and Dani continues showing his habit of eating bugs (that's one way of getting rid of flies!). 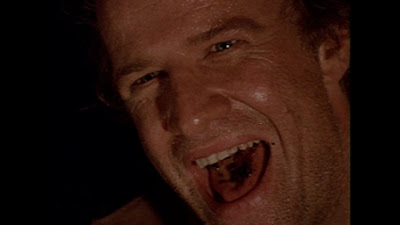 While Mario ruminates on stock bird sound effects ("What is that fuckin' thing man, I mean, you hear that thing in every Tarzan movie, Is it big? Does it bite you? Should we be runnin' from that shit?"), Armor and his men move into the forest, leaving Dani and Cole to either get killed, or wade through the river filled with spiny-penis-biting-fish. The two 'crazy gringos' eventually escape from Armor and his trigger-happy men (who probably wiped out an entire ecosystem in this scene) by jumping of a cliff into rapids! That is a plan I can totally see working! 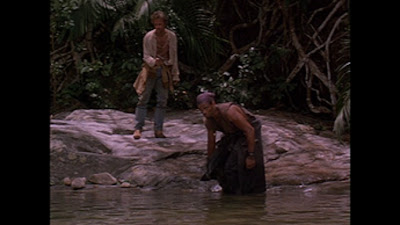 After meeting up with arms dealer Bennett (Sally Kirkland)-and Dani learning that laser sighting is for wimps ("for fools who can't even aim"), Dani and Parker wind into the city and go to an all-black nightclub, filled with several singers cameoing, from Christopher Williams to Dr. Dre. Cole's 'bitch' is is forced to stay outside, while Cole goes inside to look for a pilot. He finds Izzy, who's the black equivalent of Murdock from The A-Team. As soon as they leave the club however, they are captured by Armor and co. 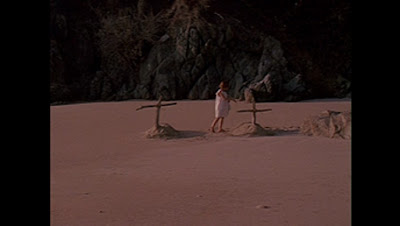 While Cole is imprisoned at Armor's estate, Armor and goons helicopter dunk Dani through the ocean until he gives in and tells them the location of the boat. Armor's goon Java however, has betrayed his boss to Loomis, who Armor told that Dani and Cole died over the cliff in a bid to get all of the money to himself. 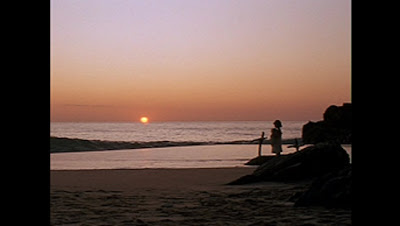 While Cole escapes and hightails it out of the estate, Armor and goons return to the estate, finding it a bloodbath. Dani jumps out of the helicopter while Armor is distracted and lands in a river right as Cole runs by. The two escape while Armor goes back to Loomis and buys his guards out. The guards bury Loomis alive (as he did to his cheating wife at the start of the film. "Do you think I'm overreacting?" he wondered). And there is something that most genre fans will revel in in this scene. One of Loomis's guards looks awfully familiar. 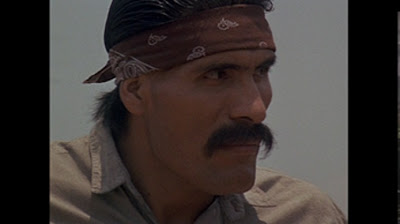 With everyone converging on the location of the money, it becomes increasingly apparent that this film is clearly not happening in any reality we know. Logic in this reality has it that getting shot in the leg is not only a basically harmless wound, but if shot in the leg, in the next scene, you'll be able to calmly talk to and help the guy who just shot you with no apparent sign of injury. Dani knocks Cole unconscious and leaves him to go after the money alone. While Dani is fighting-and soon captured by-Armor's goons, Cole is approached by a crooked DEA agent. Cole sees through the agent's deception and responds by triple-kicking him out of a window! 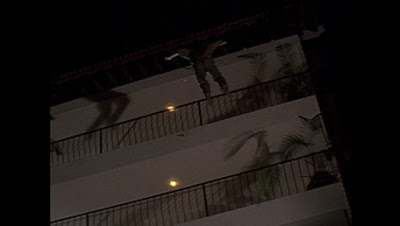 Cole saves Dani and a big shootout erupts between the two factions at a marina, until all that's left is Cole, Dani, Armor and Maria. When Cole and Dani find the boat-named The Killer, they try to sail it and escape. This involves the severing of the mooring lines, which Dani does with his pistol, hilariously wasting all of its bullets! 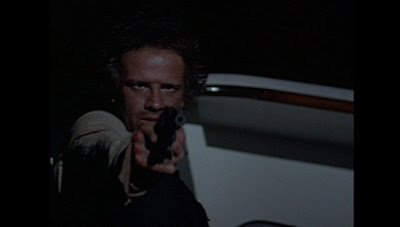 Armor and Maria find the boat before the two can escape and they each go after Cole and Dani. And Armor shows a severe case of villainous stupidity. With Armor talking while Cole is knocked to the ground, the scene goes like this, "*menacing and insulting speech about your murdered cop father*"..."COME HERE MOTHERFUCKER!!!!"
Lesson Learned: Don't EVER fuck with Mario van Peebles! 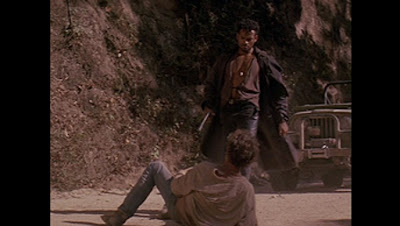 Dani, in the the meanwhile, manages to fire a speargun into sexual psycho Maria's shoulder, which, going by this movie's injury statistics, I just assumed that if you'd give her a first aid kit and she'd be back into the battle in no time. Cole and Dani get off the boat just in time before it explodes, killing Armor just as he delivers a hilarious exit line.

And what happened to the money you ask? 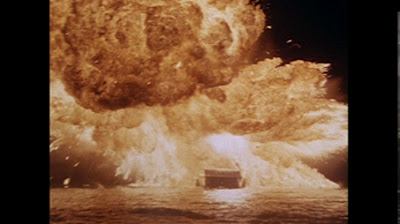 Poor guys in these movies can never catch a break can they?

So that was Gunmen, one of the great forgotten action gems of the 90's! This movie was a blast (hold on while I shoo away the bad-pun-police from my door) to watch from beginning to end! The action scenes were great, the scenery is awesome, the soundtrack is fun, and the story is entertaining as hell. As for the acting, Lambert and van Peebles are great and have great buddy chemistry between them. Denis Leary is fantastic as the film's psycho villain, and he plays a REAL villain to boot, not some present day 'politically correct' villain-the character of Armor is the kind of guy who will casually execute a man in front of his wife and kid, then shoot the grieving wife! Patrick Stewart has only about ten minutes of screen time as drug baron Loomis, but he's fun in his role. The rest of the acting is fine throughout. 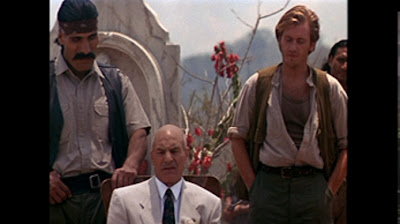 So, to summarise, anyone who loves action movies or is a fan of Christopher Lambert and Mario van Peebles should find and watch Gunmen ASAP!

And of course, being a film with Christopher Lambert, the hilariously distinctive Lambert laugh is heard several times throughout!