The Dirty Dozen definitely played a centric part in creating the 'guys-on-a-mission' sub-genre. Whether it be in war films or action films with no warzone in sight, the formula has been one used with varying success.

If Gun-For-Hire film American Tigers has anything to teach us, it's that if you want to make sure that your Dirty Dozen-style a surefire success, just copy The Dirty Dozen word-for-word, there's no such thing as copyright!


OK, it's not as bad as that, but it's not that good either. American Tigers primarily follows the plot of Dirty Dozen, albeit updated for modern times. Sergeant-Major Michael Ransom (Sam J Jones) is a former war-hero, now in charge of ordering executions for military-prisoners. He's approached by General Clay (Joe Estevez), who tells him of a terrorist cell located in suburban AMERICA that desires to topple the current government of AMERICA and instill it's own AMERICAN government that they feel will better meet the needs of the AMERICAN people! (This movie might just be slightly over the top in it's American-ism!) Ransom balks at the idea until he finds out that its leader is none other than his arch-enemy Colonel Riley Hooker! 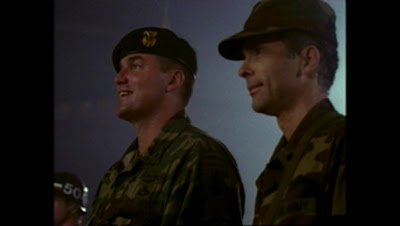 And yes, you read right, Sgt-Major Ransom is played by none other than Flash Gordon himself, Sam J Jones! So, has fifteen years and the advantage of actually talking with his own voice improved on his acting skill? Yes actually (I'll get to his performance later). Ransom is ordered to form a clandestine commando unit out of the death-row military inmates who he would otherwise order shot. Ransom finds the men he wants and forms them up, talking to them in group and separately, all the while making sure that they know what the cost of any kind of disobedience or insubordination will lead to. 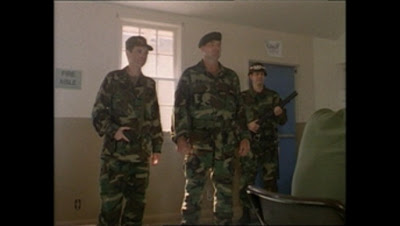 This dirty-half-bakers-dozen is comprised of men like Pvt. Cody, who accidentally ran over a baby while escaping from the place he just held-up, Pvt. Dettman, a bulking Russian who killed a man with a single punch over six bucks, to Pvt. Gomez, who killed his wife after suspecting her infidelity, only realizing after the fact hat she was holding down a second job to keep the family afloat, to Pvt. Rancich who set fire to his commanding officers house, not realizing that the officer's wife was in there, to Pvt. Matsuda who stabbed a woman to death over forty times and forgot to leave the scene of the crime, to Pvt. Mills who got stoned, hacked three men to death and went back to sleep in his barracks, covered in blood, to Pvt. Wallace (it's never revealed what he did). Sam J Jones gets to have a lot of fun in the scene where he exposes everyone's criminal acts and their stupid mistakes, while nearly saying Lee Marvin same scene in Dirty Dozen verbatim! (To the movie's credit, it's really only in this scene where it rips of Dirty Dozen word-for-word.) 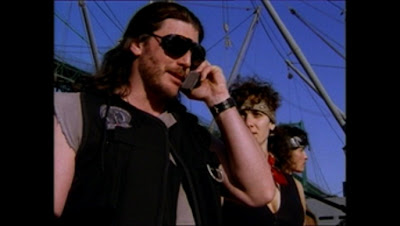 This terrorist cell is a particularly FEARSOME one, being that it's comprised of a HORRIFYINGLY LARGE ARMY of...16 men. And their base of operations you ask? A single small boat. I get the feeling that AMERICA can handle the NWO threats of these particular terrorists! 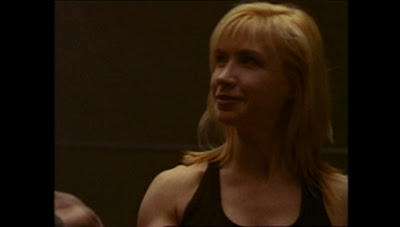 It's about now that I should get into famous martial-artist Cynthia Rothrock's five-minute starring role in the film. She only appears shortly  but man are her scenes worth it. They start with Ransom calling Cynthia Rothrock (she's playing herself in this film). He asks her, and I quote "I'm gonna need you're special skills again". You read that right, Cynthia Rothrock, in her spare time helps the AMERICAN military fight evil with her super-martial-arts-skills! Ransom gets her to train his men, who are out of shape due to ages in the slammer. You read that right as well, this is a film where a terrorist cell is combated by a military unit trained by Cynthia Rothrock and led by Flash Gordon! How could this film have failed!? 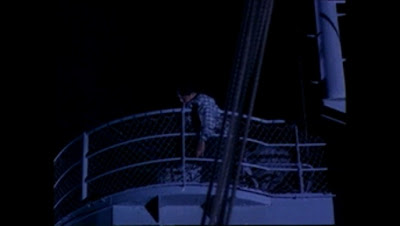 Oh , yeah, it's a Dirty Dozen rip-off, so it's required to be filled with nearly 90 minutes worth of padding...you may think I'm joking throwing that number out there like that-I'm not! This film goes for 97 minutes and nearly ninety minutes worth is made up of training sequences and such! The Dirty Dozen could afford to not have anything happen for a while because not only was the setting much more interesting, not only was the training actually interesting, but because it went for two-and-a-half-hours! Its final battle scene was about half-an-hour long! American Tigers tries to cram that plot into a 90-minute movie, resulting in a small action setpiece that's a third shorter than its counterpart! 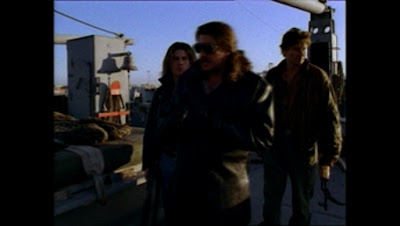 So, after Ransom's unit wins a competition with a Navy-SEAL unit who were also chosen for the mission, they finally, FINALLY get ready for the final assault on Riley Hooker and his henchmen. Helping them is the biker friend-and former comrade-in-arms-of Ransom, Dan Storm (Don Gibb). While one or two of the AMERICAN TIGERS are killed, the operation is a massive success, culminating in the termination of Riley Hooker (well, his corpse at least) and his terrorist buddies (their corpses as well) in a massive...hilariously bad CGI explosion! (Gotta love the planks of wood seen flying from the 'explosion', given the ship is completely metal!) 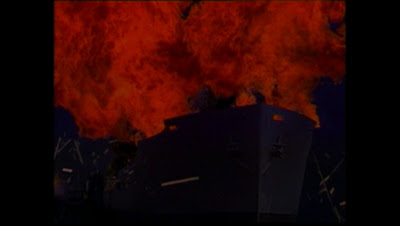 So that was American Tigers. It wasn't too terrible of a movie. The acting ranged from good and fun to watch with Flash Gordon and Cynthia Rothrock, to average with most of the American Tigers unit, to terrible with Riley Hooker. Todd Curtis's performance in the film as Hooker is hilariously wooden, especially since as the film's main villain, he's given several evil speeches, all of which he recites with the enthusiasm of a block of wood. The only thing close to action before the finale is the opening, which features what may be one of the worst car chases recorded on film. The movie does have several fight scenes during the competition segment, but they get boring really fast, especially as we're treated to having to watch ALL SEVEN of the American Tigers fight! ALL SEVEN! One huge negative to the film are the scenes were Ransom and Dan talk in a bar. Why are these scene so horrible? because they showcase some of the unsexiest strippers that I've ever seen on film! Another weird aspect to the film is it's morality. When the movie is over, the (five or so, it's hard to tell when one of the American Tigers just vanishes from the film, never to be spoken of again or even acknowledged-General Clay reads of the numbers of living and dead Tigers, it's 2-4! Someone's missing!) surviving Tigers are pardoned from their crimes. Does anyone else get the feeling that having people who have hacked people into tomato-soup or committed arson might not be the kind of people you want running around free on the streets. Another stuffed up bit of morality is with the rival Navy SEALS group, who are portrayed as villains purely because the plot says so, even though not only are they fully qualified for the job and were trained for it for weeks and not days, but they aren't a group of cutthroat murderers picked from death row! 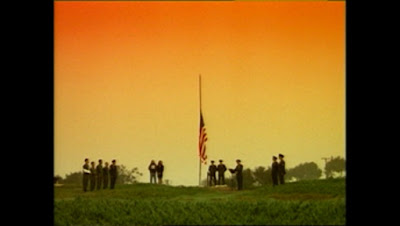 All in all, American Tigers, while not a good movie, isn't entirely bad either. It skirts the narrow line of boredom dangerously but thankfully never quite tips over. The acting is fun, good and bad and the story is watchable yet very, very stupid (Riley Hooker is against AMERICA letting in any immigrants (whether they be the oft-complained against Muslims or accepted Italians), yet his 'crack' terrorist cell is comprised mostly of American ethnic minorities (Hooker even addresses this nonsensically at some point, saying that his cell is comprised of Cambodians, Libyans and such, what he says however makes no sense with his stated agenda and leads to nothing!)). So if you're ever in the mood for a Dirty-Dozen knock-off, give American Tigers a watch if you want, but if otherwise, skip it.
Posted by Chris Hewson at 6:15 PM