Ok, here's my first Halloween review-for Zombie 4: After Death! I guess I have to explain the Zombi/Zombie Flesh Eaters series to the uninitiated...

George Romero's Dawn of the Dead was released as Zombi in Italy. Soon after its release, Lucio Fulci made Zombi 2, regarded as one of his best movies (and that it is!). Then, nearly ten years later, another unofficial sequel was made-Zombi 3. It's a load of fun! Soon after that Bruno Mattei/Claudio Fragasso/partly Lucio Fulci flick was made, 'Clyde Anderson' made Zombie 4: After Death. And a couple of years later, Zombie 5: Killing Birds was made (it barely featured zombies, barely featured birds, killer or otherwise, and most surprisingly, it had Robert Vaughn in it!). None of these movies had anything to do with each-other, and Zombie 5: Killing Birds was made a year before Zombie 3 and 4-it was retitled and rereleased as Zombie 5 by...someone. (Also, by the time Zombie 4 came out, the series added the missing 'e' from 'zombie', which kinda sucks, since Zombi looks a lot cooler than Zombie-therefore, I will never refer to Zombi 4 and 5 with the 'e' ever again!)

So, time to get into things. Zombi 4 is about a group of disease researchers who were working on a tropical island. When their medicines failed to help the daughter of a witchdoctor, said witchdoctor goes crazy and summons zombies... 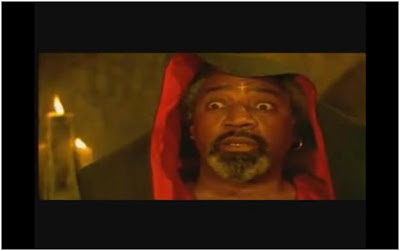 After an opening narration, Zombi 4: After Death opens with quite possibly the most 80's-tastic movie theme ever! When it's over, the film starts off like it's midway through the movie, with the evil priest in his cave lair turning a crazily dancing woman into a zombie, while the-armed-scientists approach. The woman is sucked into the ground just as the scientists arrive. They rant at him for a few minutes, and when one wants to shoot at him, he responds with this line- "Go ahead, what are you waiting for? Aim here! But remember, I'll persecute you after I'm dead! I'll come looking for you, to feed on you intestines!"-Oddly specific interest in the intestines there, Mr. Witchdoctor!

After the dub voices (the awful, awful dub voices) badly mispronounce macabre, one of the scientists shoots the witchdoctor. Everything's quiet for a second, then the dancing woman jumps out of hell, now a zombie and attacks everyone. 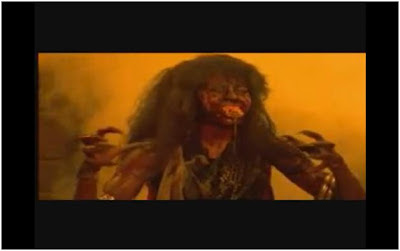 The film abruptly cuts away to a couple with their young child. The father is killed, and the mother gives her daughter a special necklace, then tells her to run as fast as she can. So, yeah, the mother abandons her daughter to run on her own through a zombie infested jungle just so she can attack the single nearby zombie (sure, it did kill her husband, but does she want her daughter dead too?!).

The movie then cuts to twenty years later...but you wouldn't know it! While the little girl is running through the forest, the film abruptly cuts to a boat driving by the island. No twenty years later' caption, no time cut, nothing! 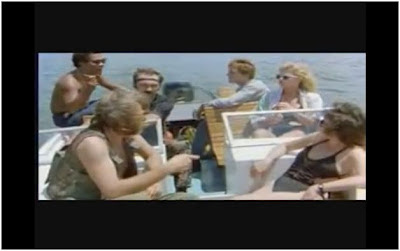 On the boat are a bunch of mercenaries and friends, (Tommy, Rod and Louise are the only names I ever heard said!) who are...on a boat for some reason. One of the friends is the little girl from the prologue, all grown up (Candice Daly). The boat malfunctions just as strange wailing is heard from the island. The group have no choice but to go onto the creepy island. Also on the island are three...other people (played by Chuck Peyton, aka Jeff Styker, gay porn star (who plays a guy named Chuck-how original!), Massimo Vanni, Italian exploitation stalwart, and...some actress-I don't know her name. Sorry, actress!), who are looking for...something (it's kinda explained later what they're looking for, but it still makes no sense-whywould people wait twenty years before investigating what happened on the island? And people survived and escaped from the island (what, you didn't think the little girl pulled a Jaws and swam across the ocean did you?), so why aren't the horrors of this island known by the government, or the public?!). 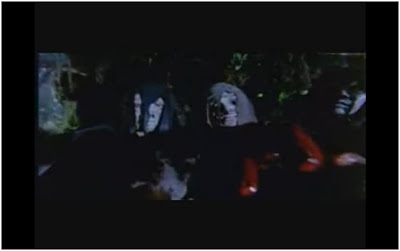 The mercs and co. are making their way through the forest when Tommy (Don Wilson) sees a running figure-a zombie. In a hilarious scene, Tommy floors it, chasing after the zombie, catches up to it, and beats the crap out of it! Zombies can sure get owned when they're being attacked by people who don't know what they are! Oh, and by the way, no, I don't know why he attacked the 'fleeing figure' (he never knows about the zombies) either... Tommy gets bitten when he's not looking, and the rest of the group find Tommy, and the carry him along as they trek deeper into the island 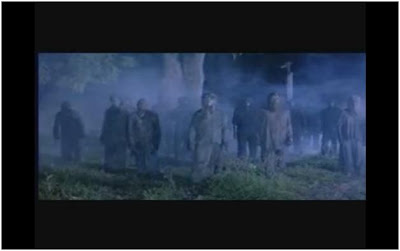 Meanwhile, the three...people (who mention having found diary logs talking of 'the damned souls rising up') have found a cave. They go in, exploring, while a very cool music piece plays! It's so good that I wonder if it's original to this movie! (While many have original music, loads of Italian knockoffs lift music as readily as they do film plots).

The mercs and co. find a ramshackle hospital, and they lay the ill Tommy to bed, and search the building. They find a massive weapons cache, full of machine guns, grenades, etc.-perfect zombie killing tools for anyone!...Except horror movie characters, who almost always have awful aim when it comes to zombies!... 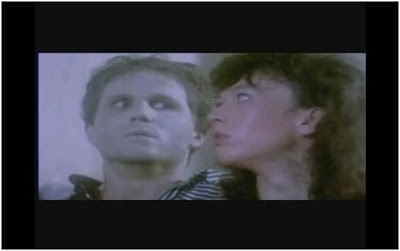 Back in the cave, the trio find 'the book of the dead'. Before you can say 'what have you done, you fucking idiot', glasses guy reads aloud the incantation to reopen the third door to hell! I'm sure everyone on the island will thank you, you moron! The trio are attacked by zombies. Guy and Woman are brutally killed, but Chuck manages to escape. 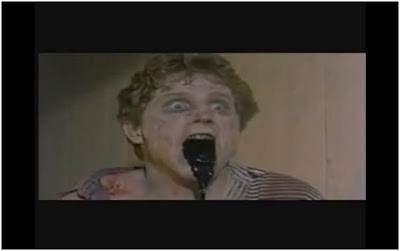 Back at the hospital, Rod's (Nick Nicholson-I swear that's his real name, not an Italian pseudonym!) keeping guard and talking with Woman (it's not my fault if the movie never names most of its characters!). Just as they turn to go back inside, a zombie suddenly leaps at them. Rod, Goatee and Black Guy (movie, I demand you name your characters!) demolish the lone zombie's body (all firing their guns at once-morons!). Chuck runs onto the scene and kills the undead sonuvabitch with a headsplosion via pistol shot.

Chuck tells the group that an army of the undead is coming to the hospital. Everyone gears up just as said army arrives. They shoot the zombies, while...um...Little Girl From Prologue relights a candle shrine that she found earlier (which Rod called bullshit, blowing it out, which I won't call him an idiot for-It's pretty clear that these candles are doing jack shit! Zombies are still roaming around the island!). She starts chanting, but is attacked by a now-zombified Tommy and a ninja Zombie!

She is saved by Goatee (that's not his actual name, just what I called him-I still don't know what his name was), and after brief hesitation, the group decides that Tommy needs to die, and they all shoot him in the head. ...Yeaah, I did just say all of them shoot zombie-Tommy in the head! Don't worry guys, it's not like you need to conserve ammo or anything! 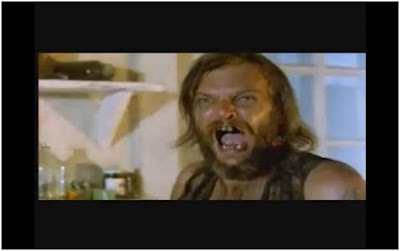 Thanks to the loss of a close friend, Rod loses it and runs out of the hospital, taking down some zombies with his gun and his legs...And he's killed in under a minute.

Jenny (the name of the girl who escaped the island-only the credits told me that!) remembers what happened the last time she was on the island, and while she thinks about a way to stop the zombies, an army of them arrive by the doors, including a zombie-Rod. 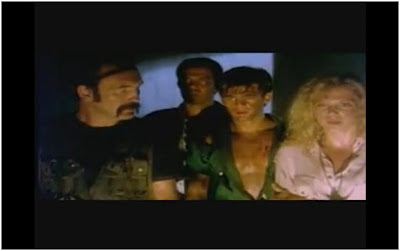 Rod goes on his own into some building and Goatee runs after him...And gets shot! Zombies with guns, HELL YEAH! (Actually no, all 'zombies with guns, HELL YEAH's are reserved for Nightmare City alone!). He's also bitten, which is hilarious, thanks to what he said right before it happened!-"You're not getting your dirty hands on me!". He's saved by the other survivors, and he tells them to shoot him. They agree to...and they just carry him back to the hospital and never kill him. SHOOT HIM! He's been bitten! He wants you to shoot him! You agreed to shoot him, so why aren't you doing it?! (Naturally this comes back to bite them in the ass! Or rather, shoot them...). 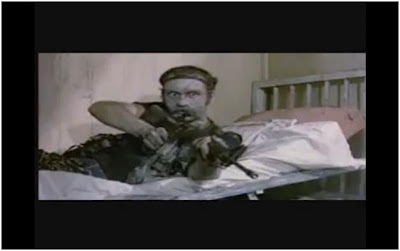 Soon it's up to the remaining survivors to destroy the zombie horde and close the gates of hell...

...Which they do, leading to a happy endingHAHAHAHA! Of course not! What would a Claudio Fragasso-Rosella Drudi horror movie be without a downer ending, whether it makes sense or not, or whether it's out-of-place or not!

Zombi 4: After death is definitely a fun little 80's zombie movie, but it's by no means perfect. The main problem is with the plot-there isn't one. There are a bunch of people on an island with zombies. They must kill the zombies and survive. The End. That's it! The only real story the movie had was the 'twenty years ago' segment, and that was only through dialogue exposition!

Onto some positives, the soundtrack is good to great in places, and the theme, as I said before, is an awesomely 80's-tastic theme! It's by Italian band Al Festa, and the lyrics are pretty much indecipherable! It's like Al Festa just sung the song to phonetically sound like certain words. Some words can be understood, but others sound like something, but also something else at the same time. It's the kind of thing that happens when you let people who don't speak English sing a song in English (although maybe I'm wrong, maybe Al Festa do speak English, and the song's just poorly enunciated...). 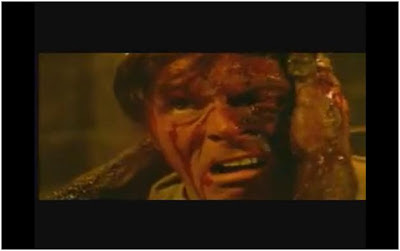 The movie's gore is pretty good. We get a face ripped off, throats bitten, a fist impaling, etc.. But other times it looks like the zombies are just smearing cranberry juice on their victims! Apparently a lot of gore from this was excised by censors! (Fuck censors! And fuck Steven Moffat too! [He's not a censor, I just need to vent. He's a once great, now awful awful writer who is doing his best to riddle New Doctor Who with more plot holes than swiss cheese!]), which sucks to no end!

The zombie make-up ranges from ok to pretty good. Some of the zombies look like the demons from 1985's Demons, with the teeth, and the pus. Also, becoming a zombie in this movie gives you an awful hairdo if you're a woman! (The one in the first screenshot is easier to see when actually watching the movie. When made smaller, it just looks like she has her hair falling over her eyes, rather than the awful hairdo that it actually is). 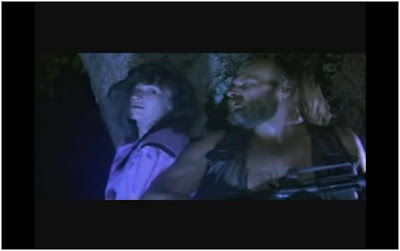 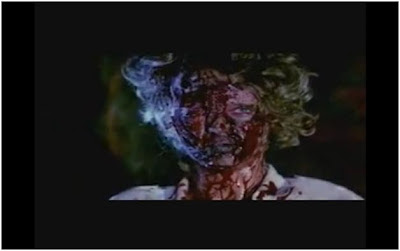 The zombies are very inconsistent. Sometimes the speed-walk, other times they slowly shuffle, some talk, some don't, and some use guns, but others don't.

There's no way I can properly judge the acting, since the dubbing is so bad. It's generally ok, I guess.

One funny stupid thing about Zombi 4 is when, near the end, one character gets shot in the shoulder and knee, yet can still walk, and even after he's shot twice in the back, he's still ok enough to crawl away and blow the hospital up! Also, Jeff Stryker's character, Chuck, always, always has his shirt mostly open, to show off his abs!  ALWAYS!

Something else that's kinda funny is how the smoke machine seems to be invading the movie! There are several scenes, indoors or out, where there's too much fog around! It obscures those shots, partly.

So, in closing, despite it's problems,  I absolutely recommend this slice of 80's Italian zombie cheese!...