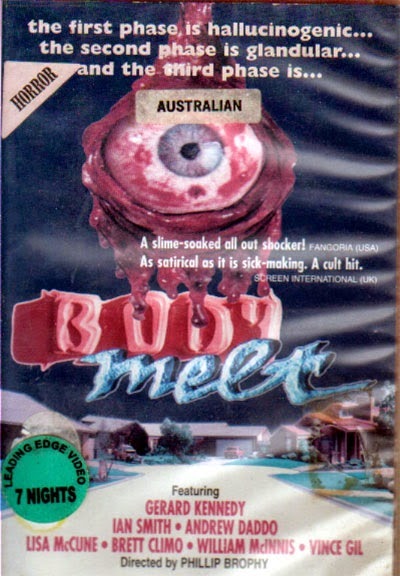 As an Australian, I love me some Aussie horror. While I absolutely despise my home country (because I like burning to death and/or losing all my worldly possessions as much as I like venomous snakes), it always fills me with pride seeing homegrown Aussie movies, especially of the horror variety! Unfortunately, the movie I'm talking about tonight, Body Melt, is not good, and it doesn't fill me with any positive feeling at all!... 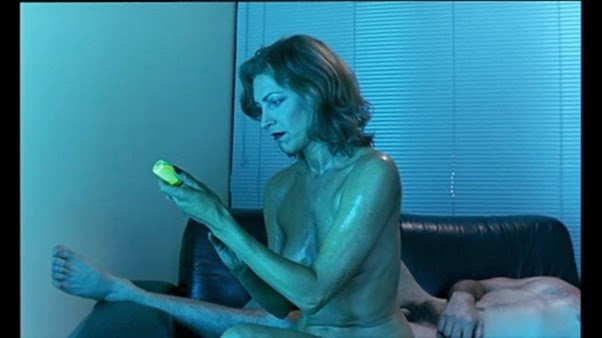 An evil pharmaceutical company has picked out a street to send out some free samples to, which, unbeknownst to the denizens of Pebbles Court, are of a body altering drug that, due to a missing ingredient, slowly degrades the human body, causing horrific hallucinations, nightmarish contusions, and eventual gory death. It doesn't take long for the street to become a macabre testing ground as people die left right and centre, from killer placentas, mucus concussions, and ribcage explosions... 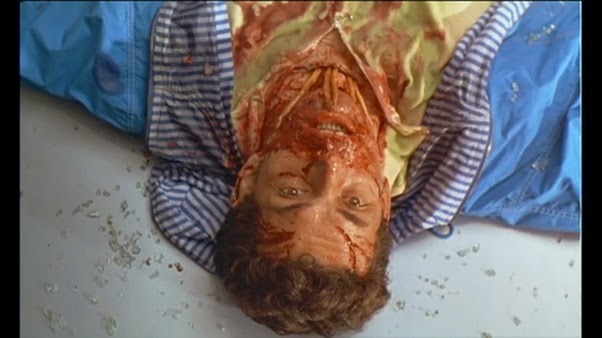 Body Melt is a dreadful piece of crap! It's a really annoying movie on multiple grounds. It has no substantial plot, and is more of a sequence of somewhat gory events. There's no cure for the drug, so everyone in Pebbles Court is already DOA, stripping the movie of any tension. We already know what's gonna happen, and it's boring watching a film with no surprises. If only the deaths had been the side-story, with a main plot following the police, then it might've had a chance of working.

The movie starts off seemingly as a surreal corporate espionage tale, but after the fifteen minute mark, it's suddenly mixed in with an out-of-nowhere plot right out of Texas Chainsaw Massacre: The Next Generation, only stupider! Even I can't believe I just said that! These parts of the movie are intolerable! They're incredibly annoying, ugly, and completely distract from the film we were up until now watching! These parts add up to nearly half an hour of an 80 minute film, and have nothing to do with the rest of the movie! They're only connected by the tiniest of threads, and even that's negligible! What's even worse is that these scenes lead to nothing! After a certain point, the hick family just drop out of the movie for no reason, never to be seen again. 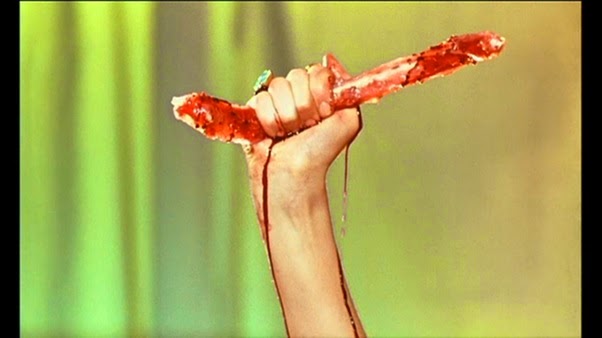 The whole movie is one big plot hole. Why is this pharmaceutical company making killer drugs which not only blow up random people, but also themselves? Why are they using a street as a testing ground instead of kidnapping people off the street and sticking them in a cell? It's no more illegal than what they're already doing. Why aren't they doing safer trials instead of all these illegal and idiotic plans?! Worst of all is the nonsensical 'shock' ending!

Body Melt is frequently touted as a satire, but I didn't catch any. It seems like this film's only message is "Man, the pharmaceutical industry, am I right?!" without bothering to actually make an effort to satirize much of anything. Just showing death scenes thanks to a dangerous drug isn't some masterclass satire, but it rather just empty, dull, and boring!

Despite having no plot to speak of, Body Melt doesn't do its characters any justice. There's a cast of well over a dozen, and they're all wasted to an insane degree! They're either killed off quickly, underused, really annoying and overused, or just plain unexplored. 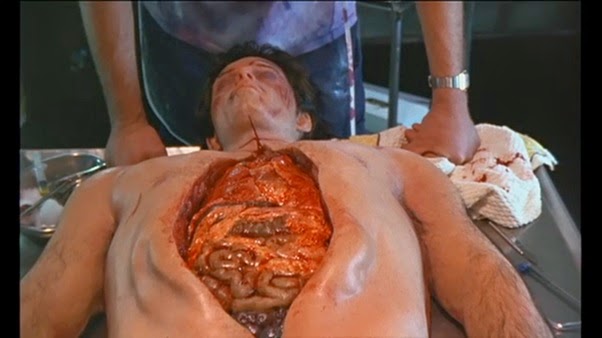 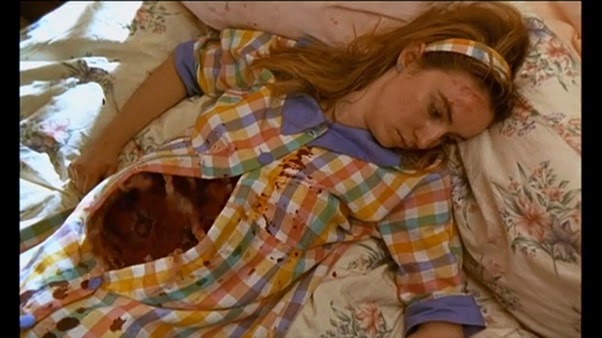 The effects in this movie are decent. The inbred hick family are unappealing, with so-so make-up, while the gore is pretty decent, albeit dumb, for the most part, and fake in others. But you know what's a 'bit' of a downfall? NO-ONE MELTS IN THIS MOVIE!

The techno score in Body Melt starts off pretty neat and quirky, even resembling the Blake Stone games, but after a while, it starts getting either dull and unremarkable, or mildly annoying. 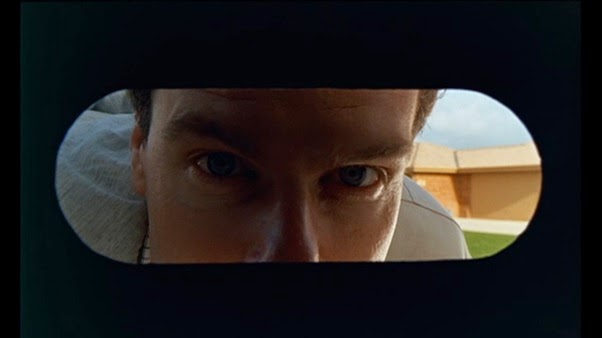 The acting in this film is also unremarkable. It's ok, but there's nothing special, and the actors playing the hick family are really bad.

Body Melt's high spot is definitely that it includes Harold from Neighbours!...NO I DON"T WATCH NEIGHBOURS! To clarify, Ian Smith is pretty much the only likeable presence in the miserable-as-per-usual Aussie soap opera Neighbours. If you've never heard of it, well it's like Home and Away, but shitter. Seeing a likeable soap opera regular who you've seen on TV for decades playing a diabolical and deranged mad scientist is super neat! Unfortunately he's really wasted, and he's giving his all for a shitty movie, but he still turns in a very good performance. If only he did in a much better horror-comedy. 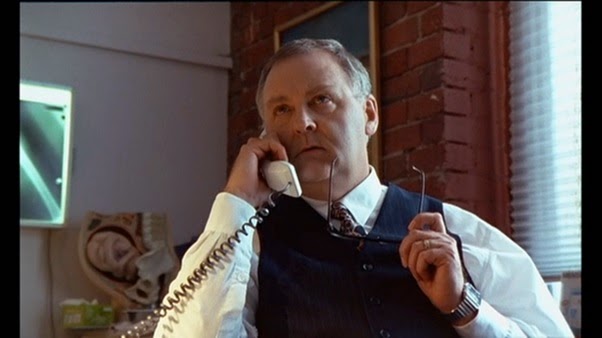 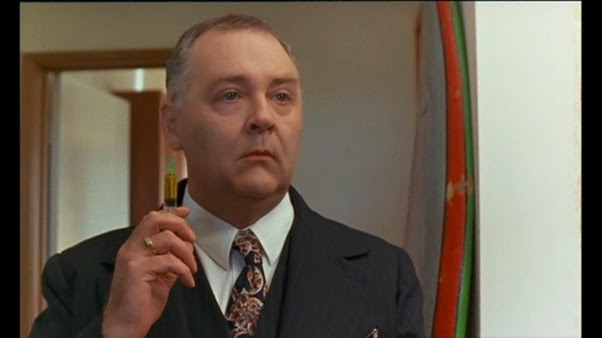 One last thing to note, just so my Aussie readers will know, Body Melt has quite the cast, with people like Andrew Daddo, Lisa McCune, Gerard Kennedy, one unmentionable (a total dick) and a few other Neighbours actors, apparently. They could actually be the ones I already mentioned for all I know, but I really don't care about Neighbours any more than I have to.

Body Melt is a bad movie! It's short, but not sweet, and I recommend you steer clear from it unless you want to be pissed of something fierce! This movie annoys me so much, and if I NEVER see it again, that will be entirely too soon!...
Posted by Chris Hewson at 8:57 AM