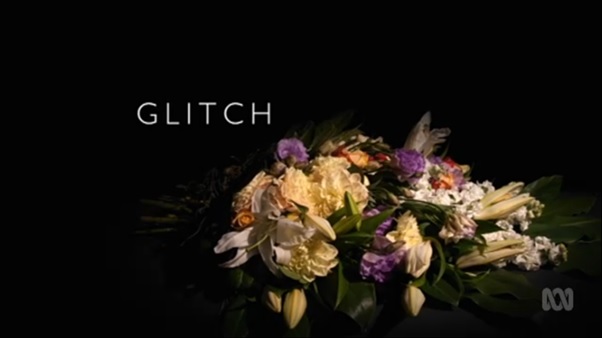 Say, in a regular Aussie town, if you see someone rise from the dead out of a shallow grave, you'd probably just think they had a mild bender the night before, and think nothing more of it!...Apparently that reasoning is why it was necessary for us to get yet ANOTHER drama about the dead coming back to life! First, there was that book, then They Came Back, then Babylon Fields, then The Revenants, then Resurrection, a Canadian remake, then the new Babylon Fields, and now there's an Australian show with this plot too! 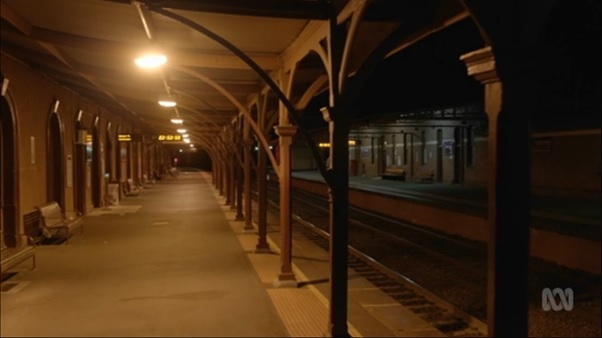 In the outback town of Yoorana, something mysterious is happening. Six people have somehow broken through their graves, returned to life. They're found by local policeman James Hayes and Dr. Elishia McKeller, who take them in and clean them up. The five they find are very disoriented, not sure of what's happened. Disturbingly, James sees that one of the people is his dead wife Kate. He manages to make her remember him, as well as who she is, and how she died, while the others take more time. Meanwhile, neighbouring cop Vic Eastley is in Yoorana to help with local police matters, and is curious about the disturbed gravesites in the cemetery. James brushes it off as just the work of local hoodlums, intending to keep the resurrected people a secret for the time being. Vic, however, can tell that something is up, and digs deeper. Elsewhere, the sixth resurrected person, Patty Fitzgerald, encounters Beau, an Aboriginal teen, and re-acclimates to the town he was once the first mayor of. Things soon take a turn for the worse when James realizes the hard way that these returned people can't leave the borders of Yoorana without suffering from instant decomposition...

The stories of the undead people, Maria de Massola, Charlie Thompson, Kirstie, the newly risen John Doe, and Patty, are slowly unraveled, as a newly determined Vic, now driven by sinister motivations, intends to hunt them down... 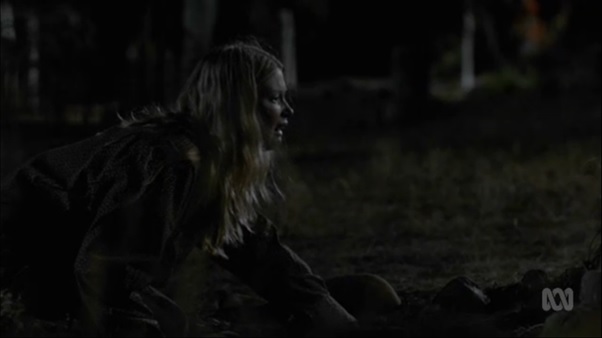 Glitch may be utilizing a pretty overused idea at this point, but it presents it in a new and refreshing way. The story isn't a copy of others. like, say. Resurrection, and plays out very differently to those shows. Most of all is the distinctive Australian feel to the show, with the setting and history playing a big part in the characters and their backstories, be it ties with Aboriginal, convict and bushranger, and ANZAC pasts.

The mystery behind the resurrection of these people is really interesting, and each successive episode leaves you wanting more and more to know what's going on!....And there's where we get into the bad. This show brings up so many questions and mysteries, and by the series' end, has answered none of them! If anything, it's just brought up even more! What the hell? This show pulled a damn Lost! Goddammit! To be fair, the series has much fewer episodes at just 6 than Lost's 24 episode seasons of nothing, but this is still a serious problem! Come the series finale, we're still just as much in the dark as when we started! Hell, I don't even know why the show is called Glitch! It's certainly not related to computers in any way! I hope there are some answers come Series 2, but I'm not even sure if there will be a second season! 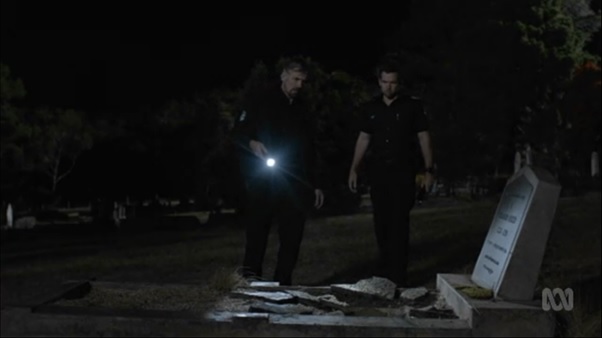 Ok, moving on, the writing in Glitch is quite strong! Despite some slow pacing, it's never leaden or boring, and it sets up the concept really well, with characters getting realistic reactions all-round. Also, for the first several episodes, there are no villains, but rather people who simply have opposing views on the matter, and take action in the way they believe is right. No-one in the show is necessarily wrong.....Well, until Vic's 180 character shift, anyway, but more on that later. 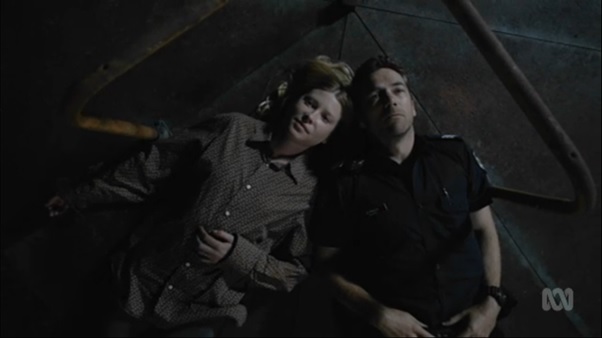 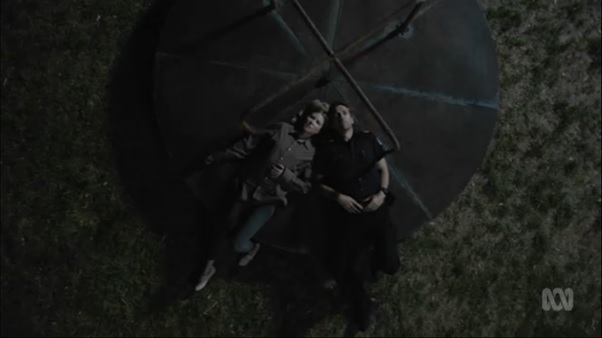 Luckily for our zombie pals, there's no such thing as rednecks in Australia, so there'll be no religious fundamentalists viewing the newly resurrected as 'aberrations of the lord that must be purged!' like what happens so often in other shows of this nature. While we do have bogans in abundance, they'll be more likely to say something along the lines of "Ay, 'ow ya goin', mate? You're not havin' the fuckin' best of luck, are ya, ya cunt. How 'bouts I spot us a fuckin' round of fuckin' beer, and let's get hammered 'till we're fucked!".

Unfortunately Glitch has really bad character and scene pacing at times. Say, Charlie goes into the local bar to find out about his past, and meets the proprietor who knows everything there is to know about the ANZAC war hero Charlie Thompson. End scene, and it doesn't cut back to them for nearly a half-hour! This kind of thing happens so many times with various characters (particularly with Patty and Beau), and it's really annoying! 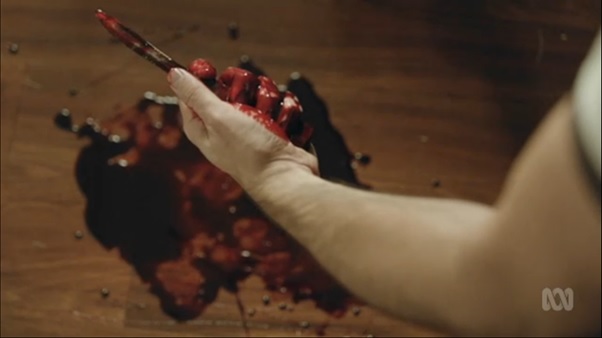 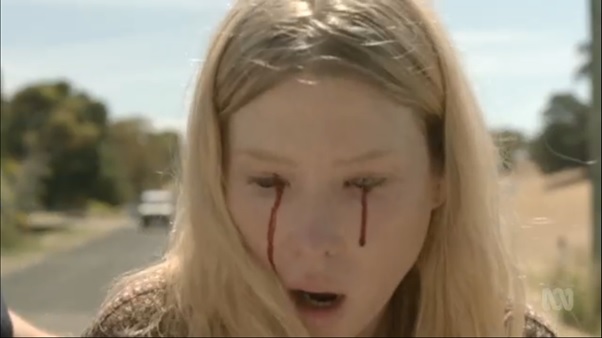 The characters in Glitch are all well-rounded, and developed. James is a good lead with an understandable and emotional conflict, and the same goes for Kate and Sarah. Dr. McKellar is decent, although doesn't get to do as much as she could have, given the mystery about her character the series starts to push near the end.

Maria can get a bit annoying at times, but she has a well-crafted and emotional story, even if it doesn't get the most climactic or happiest of resolutions.

Separated from the rest of the cast for most of the series, Patty and Beau have a good dynamic, even if it does fall into a big coincidence near the end, that borders onto the cliched and overly convenient. Patty starts off as a slovenly Irish drunkard stereotype, but he quickly becomes a likable and somewhat endearing character, and his friendship with Beau is handled really well. He gets enough humour, and drama, working really well. 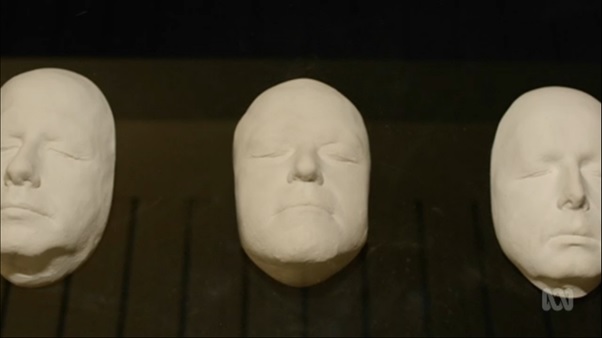 Vic starts off as a likable character, and you're glad when James finally lets him in on the secret as early as he does, but soon after, when he has a car accident, Vic comes back weird. We don't know what's up with him at first, but after a couple of episodes, we realize that he's become a more villainous figure. At first, this feels extremely out-of-character, especially given what he does to a 'certain character', but it turns out that whoever this is, it's not Vic anymore. Andrew McFarlane does a really good job at portraying a compelling antagonist. You want to know more about him!...It's just a shame that we never even find out as much as a deeper motivation beyond the basics.

Charlie and Kirstie get pretty shafted for the first several episodes, and we know nothing about them, but in the tail end of the series, it starts to delve into their characters, providing some fantastic moments (and one very out-of-place one between Charlie and the bartender). The scene where Kirstie confronts her apparent murderer is acted superbly, and handled really well!

Then there's the mysterious 'John Doe'. Very little is revealed about him, and his whole story and personality is still somewhat of a mystery, but what we do get is quite interesting, and he too is a developed character, despite his lack of much dialogue. 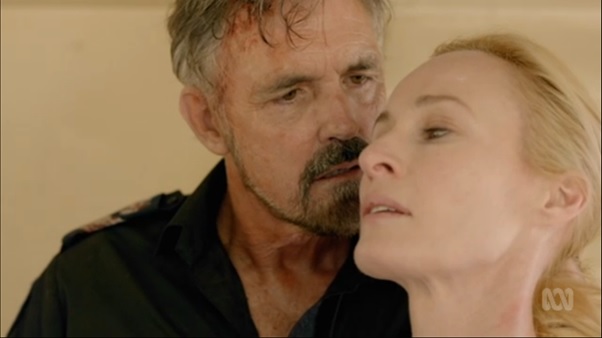 Even more minor characters aren't all that dull. Kate's mother only gets one scene, but the exchange between her and other local cop Chris is a fine scene! Unfortunately the Fitzgerald's are a pretty one-dimensional set of dicks.

The acting in Glitch is good all-round, with Andrew McFarlane as the standout.

One thing I find amusing is that this is Australian prime time TV, where unlike in the States, you can swear as much as you want!...Well, not so much on the commercial channels (bar movies, then swear all the Tarantino you want) due to general corporate stuffiness and paranoia, but ABC and SBS anyway. You can say 'fuck' as many as a hundred times, and the rating will still be low! I guess us Aussies are just hardcore like that! Heh...

The show's score is very effective, and slightly reminiscent of pieces in the morbid black comedy Jam. Unfortunately the main theme is the only bit of music in the entire show!

Glitch's effects are definitely convincing. There's some decent CGI for an instant decomposition, while everything else is practical. A particularly great effect is the compound fracture one character gets, though less sense is how his bone snapped out of his body from tripping slightly against a bit of dirt! Dude, I've suffered worse than that and got out with a mild sprain, not a friggin' compound fracture! 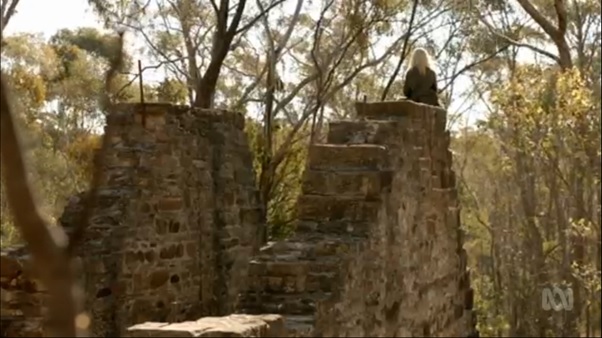 Despite the maddening lack of answers to its mysteries, Glitch is a pretty good show, and a neat example of Australian Gothic. I recommend it, although probably only when Series 2 is out, so you won't be in for a frustrating wait. The only thing I have left to say is...Would it kill these higher powers to leave a darn manual when raising the dead en-masse for seemingly no reason? At least Ishtar had the express purpose of bloody world-consuming revenge! Geez!...
Posted by Chris Hewson at 8:12 AM