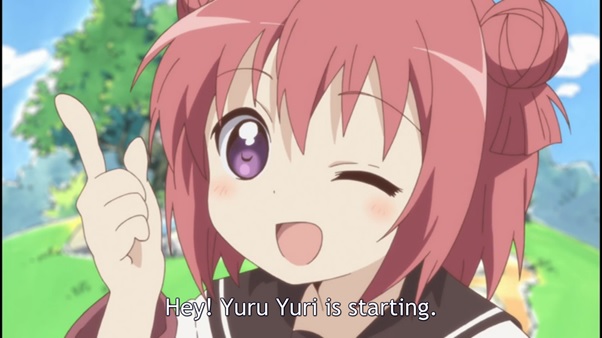 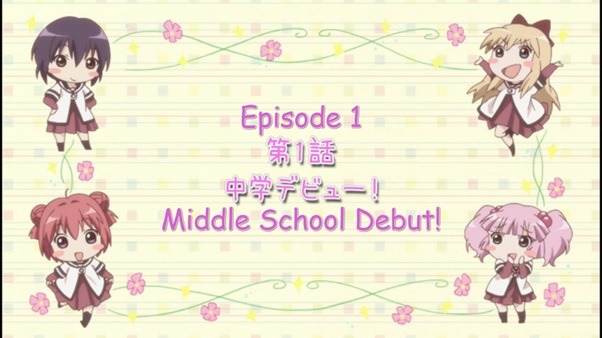 I am eternally grateful for new favourite things. Not just movies or books, etc that are really darn good, but products that genuinely make you happy too, and can change you for the better. If I didn't know about Parks and Recreation, or Daria, you better believe I would be missing out. The same goes for great webcomics like Questionable Content, both have which have not only make me laugh out loud all the time, but have also inspired me, as have movies such as Bloodsport 2 (yes, really), and Grease 2 (yes, really!). My new favourite thing is anime comedy YuruYuri, and I'll tell you why...

Akaza Akari, Funami Yui, and Toshino Kyoko are three friends starting the new year of middle school. They start up the Amusement Club, and soon gain a new member in Yoshikawa Chinatsu. Together, the four girls, as well as others from the school's student council, go through life with all the trappings therein, while Akari struggles to have even the slightest bit of presence... 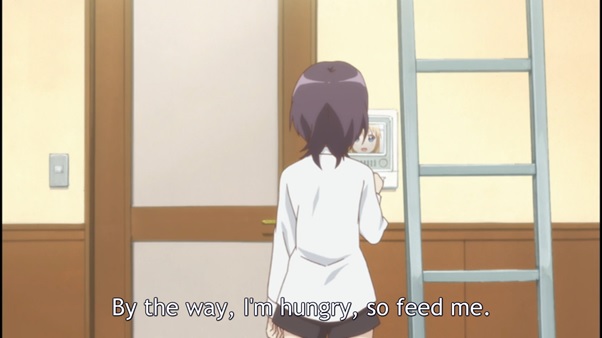 YuruYuri is a hilarious slice-of-life comedy, and everything great about the medium in a nutshell. In my opinion, there's not one bad episode of YuruYuri, and each one produces constant laughs! The comedy is very well-crafted, the pacing and comedic timing is spot on, and none of the many running jokes ever become stale. The humour is both character, and situation based, as well as some more risque jokes every now and then, and they all hit the mark spot on.

When it comes to story, YuruYuri is at times very much a 'show about nothing'. There's sometimes no set structure, but just a collection of scenes, sometimes just of the characters simply discussing a subject for half the episode (which is nowhere near as boring as it sounds). I also really like how much happens in each episode. In any other show, I can see a point where they'd just cut things off. For example, I can see another show taking the concept of the characters at a manga convention as the whole episode, whereas YuruYuri just has it be the first 10 minutes, and the rest of the episode will focus on the characters doing something very different. It keeps things fresh constantly. 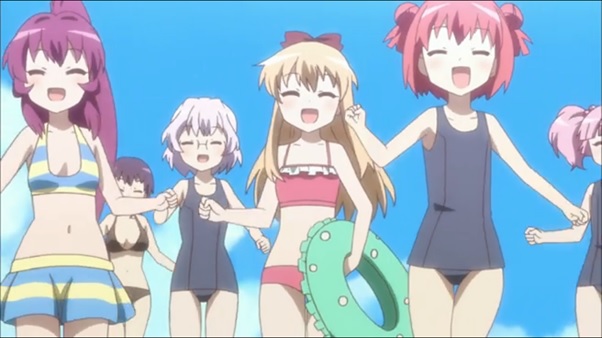 The show's protagonist is supposedly Akaza Akari, but the show jokingly plays with that concept all the time, and Akari is frequently sidelined, to the point where some episodes don't even feature her outside the humorous prologue intros. In actuality, the show has no one main protagonist, with everyone getting equal time.

The all-girl cast is made up of a vast litany of wildly imaginative and distinctive characters. No two are the same, and all are extremely likable! Even characters who aren't introduced until much later are still very unique, and bring a lot to the table. 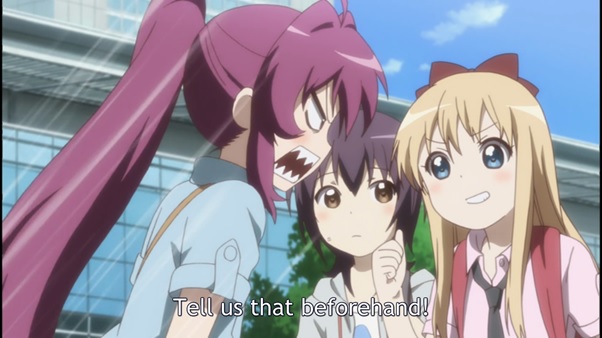 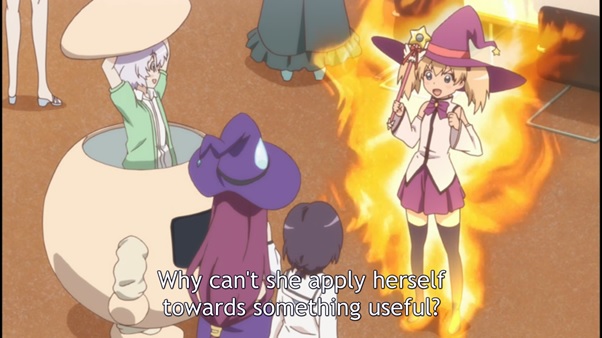 First up, there's poor Akari, who never gets the attention she wants as protagonist, due to her complete lack of presence. Then there's the aloof and excited Kyoko, who's always acting hyperactive, wildly energetic, and all-round silly. The deadpan Yui is frequently exasperated at all the shenanigans going on courtesy of Kyoko, and usually has to act mothering to her, but in the end, the two are steadfast friends, and can rely on each-other. Chinatsu is an adorable and friendly person, with a huge crush on Yui, and has a horrifying concept of art.

Vice-President of the school's student council is Sugiura Ayano, who acts incredibly and vocally bitter to Kyoko, but partially because she's crushing. She's too nervous to make any advances though, and is usually put off by Kyoko's crazy behaviour. Occasionally, Ayano makes wordplay jokes that only half work in English unless you understand Japanese, but thankfully you're still able to get the picture and have a chuckle. I like that Ayano actually admits her feelings about Kyoko to herself and to some others, rather than be a broken record, always doing nothing more than denying it. Sure, her relationship with Kyoko is never advanced beyond her crushing, but it's already better than certain overused Tsundere character templates. Ayano's best friend is Chitose, an eternally warm and cheerful person, with a bad habit of constantly having sexual fantasies about her friends together (particularly Ayano and Kyoke), which causes frequent nosebleeds. 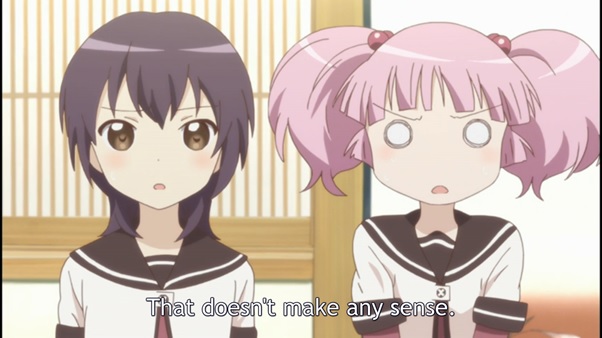 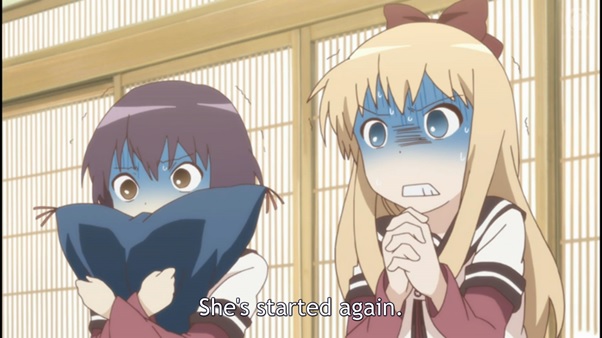 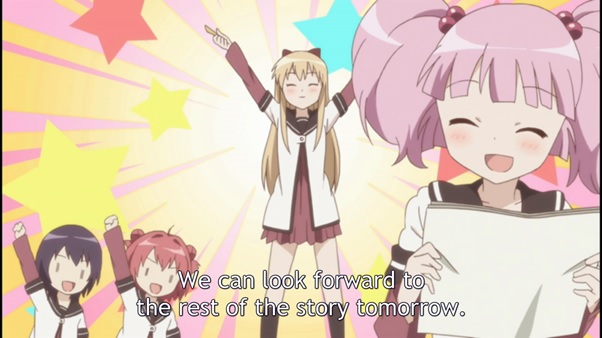 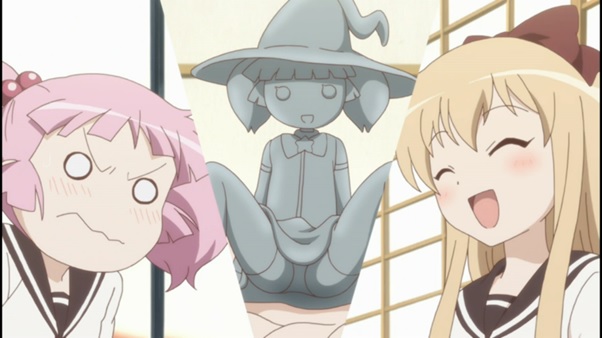 There's Himawari and Sakurako, two student council members who are constantly at each-others throats, and have totally dysfunctional and hostile interactions, but despite that, they genuinely are lonely when not in each-other's company, and deep down, they are good friends.

And finally, there's Nana Nishigaki and Rise Matsumoto, an explosion-obsessed science teacher, and imperceptibly quiet student council president, respectively. Those are the two who weren't introduced until later, and they slip right in, adding much to a show that already had plenty of characters already. It's a testament to the show that I could easily remember every character's name after a very short while, despite there being over half a dozen of them. 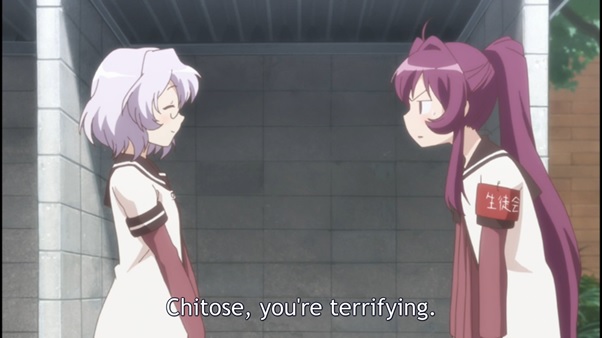 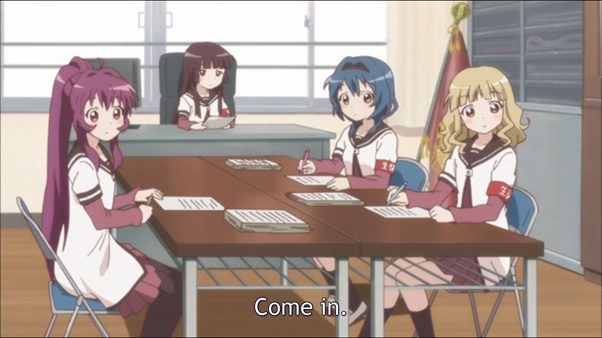 Overall, the characters in YuruYuri are all lovely, and you can really see that they're true friends to each-other, even though they may act hostile or exasperated at times. There are a few quiet and more tender moments in the show, which add so much.

A big positive to this show is that it's is extremely LGBT friendly. In this show, being gay is presented as a casual, everyday thing that these characters just so happen to be, which is great, as that's how it is in real life, as opposed to certain movies that can be rife in negative stereotypes. 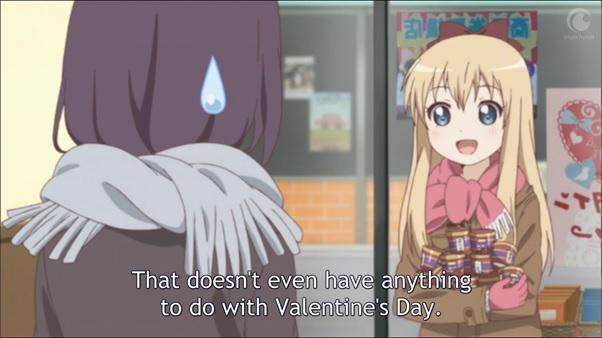 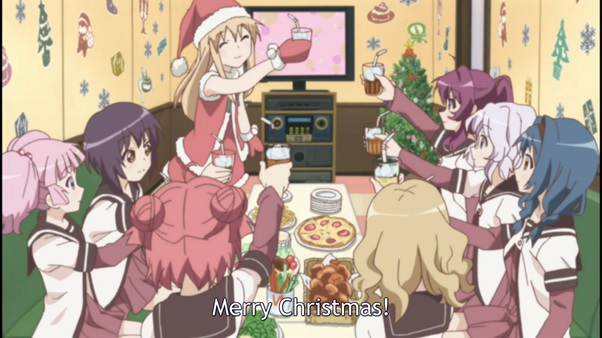 The animation in YuruYuri is beautiful! The characters all look great, as do the settings, which are vibrant and colourful. The animation is fluid, and you can really see the life in the characters' faces and expressions. The lighting is really good, too. Any of the scenes in sunset look especially pretty!

I love the score to YuruYuri! There are so many good pieces throughout, particularly the ad bumpers, which can be anything from hyper-energetic, to calm and casual. The opening and closing themes are really fun listens too! The second season had new intro/outro music as well as new ad bumper music, and while at first I wasn't the biggest fan of the changed themes, I quickly warmed greatly to the songs once I got more used to them. And as for the Season 2 ad bumpers, their new visuals are hilarious!

Oh, and one last thing, even in a show as visually frenetic as this, it still doesn't detract from the experience by having to read subtitles, and of course it doesn't, as the extremely annoying people who liken subtitles to reading a book are missing out on the key fact that as human beings, it's easily possible to look at the subtitles and the action at the same time. That, and subtitles don't take nearly long to read as those people make out. *snarl* 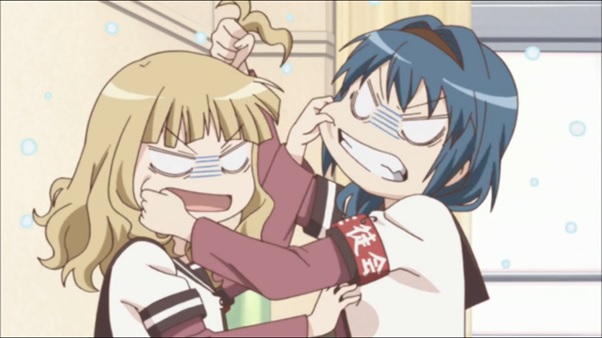 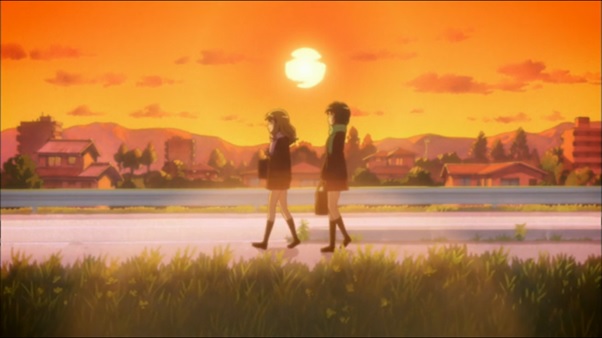 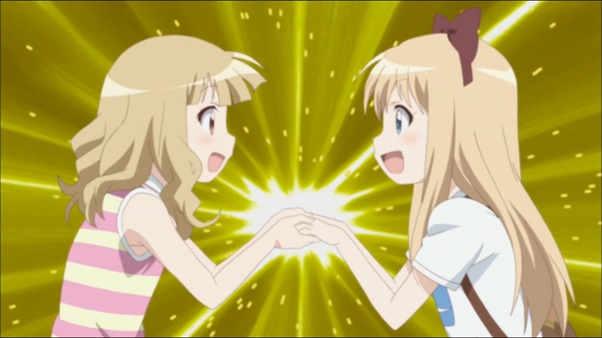 So, that's YuruYuri. Not only is there apparently a new set of OVA's that have been coming out recently, but a third season is due for October of this year! I can't wait!

I highly recommend YuruYuri if it sounds like it appeals to you. The entire series is up on anime site Crunchyroll for free, so it's literally only a click away...
Posted by Chris Hewson at 8:42 AM