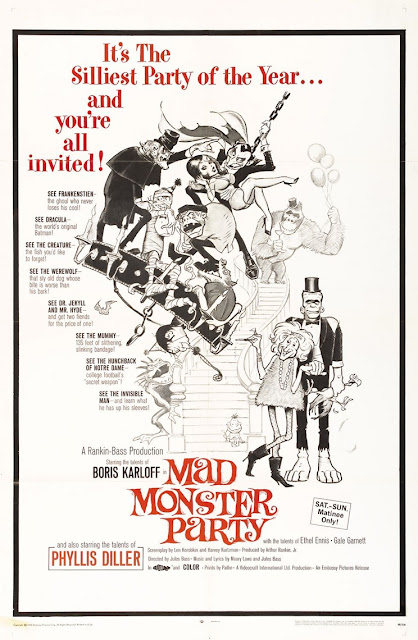 Among other things, animation studio Rankin-Bass are mainly known for stop-motion movies such as Rudolph the Red Nosed Reindeer, Frosty the Snowman, and Santa Claus is Coming to Town. They didn't just dabble in Christmas or Easter holiday specials, but also in Halloween with the ghoulishly festive Mad Monster Party... 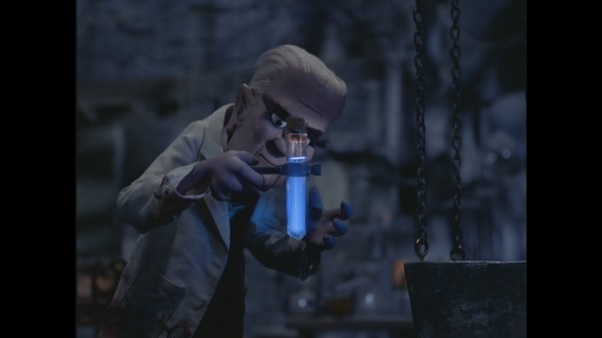 Dr. Frankenstein has made his greatest discovery-The power of pure destruction! He invites all of his fellow members on the Worldwide Organization of Monsters (from Dracula, to The Wolf-Man, the Mummy, Jekyll and Hyde, etc.) to his secluded island castle on the Isle of Evil, so that he may name his successor. Also invited is his nephew Felix, a clumsy and allergy-ridden young man working a lowly job, frequently getting in trouble due to his clumsiness. The somewhat-bad Doctor's assistant Francesca feels that she rightfully deserves to be Frankenstein's successor, and teams up with Dracula to kill Felix. The bloodsucker however has other plans up his sleeve... 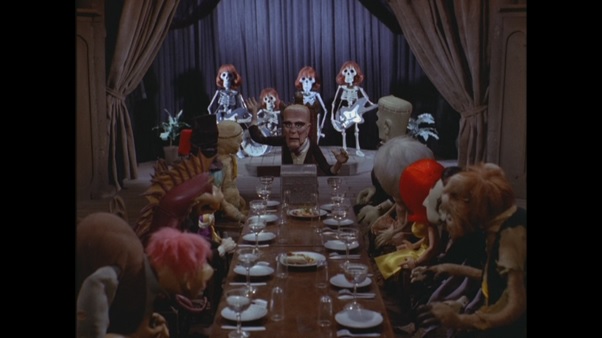 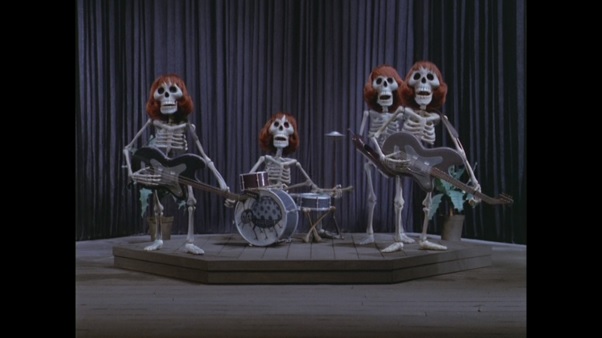 My biggest problem with Mad Monster Party right out of the gate is the pacing. It's pretty leaden in places, with a few overlong scenes. It takes half the friggin' movie for Felix to even get to the island! Before that point, the proceedings are going forward, but without the main character, who up until that point only has 4 pretty short scenes, tops. Thankfully things do pick up once he finally does arrive, but it's kinda too late.

The story in Mad Monster Party is ok. Despite being too glacial at times, it has its moments for sure, but other parts aren't all that great. One particular oddity is not only that Felix and Francesca fall in love at all, despite her spending the majority of the film plotting his murder, but what happens when they fall for each-other! Either this particular Rankin/Bass character is big into Olga's House of Shame, or this is a VERY AWKWARD scene! Especially for a kid's movie! The film also has one hell of a downer ending, in more ways than one! 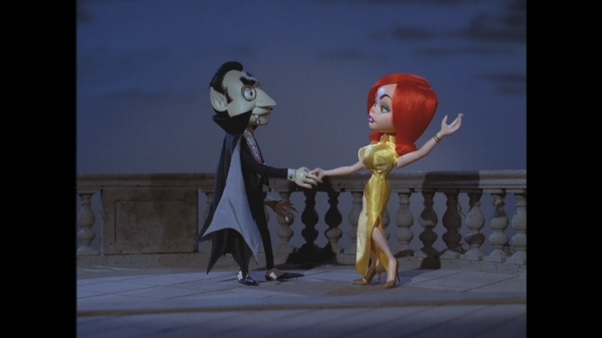 Funnily enough, while I feel that at only around 75 minutes, movies like The Nightmare Before Christmas and Corpse Bride would be fine being longer, Mad Monster Party really could've been improved by cutting it down to size, from its 95 minute length!

The characters are a mixed bag. Felix is a bit of an annoying protagonist, and while it is the point that he's a regular doofy guy in a castle full of classic monsters, it still kinda takes away from them when this normal human is the lead. Also irksome is how he does very little, and doesn't even contribute to the events of the climax at all! Frankenstein himself is amusing as the kindly mad scientist, though he vanishes from the movie after a certain point, only reappearing at the finale. It's also not consistent whether he's good or evil. Frankenstein's Monster (referred to as Fang for some reason) appears plenty, but doesn't have much presence thanks to his loudmouthed mate. She's a pretty overbearing character, and takes charge, which takes away from the monster himself, who's basically relegated to being her sidekick. Others like The Wolf Man and Jekyll/Hyde are fun, but the latter, as well as the Mummy, and Quasimodo (who's not a movie monster, you assholes!) feel particularly underused. Frankenstein's undead butler Yetch is amusingly skeezy, and the Peter Lorre impression is fitting. And finally, the addition of King Kong felt a bit pointless and at the last minute, especially considering they didn't even have the rights to use him, and thus only refer to him as 'It'. 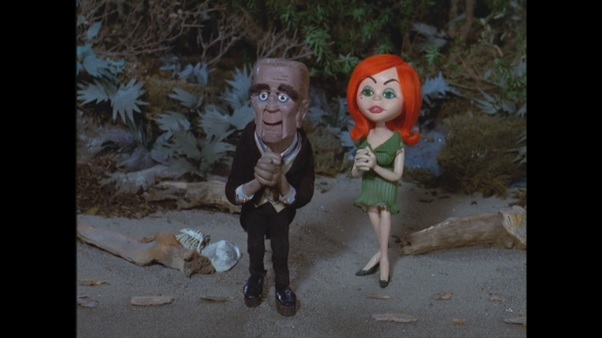 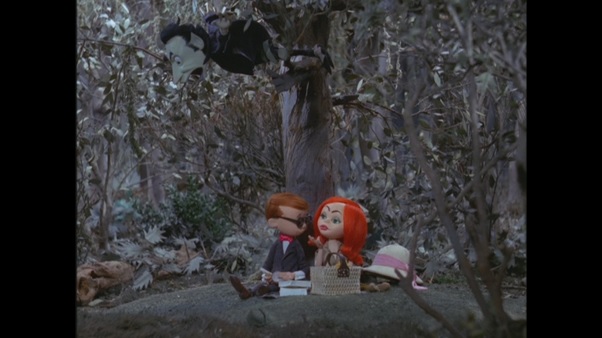 The acting is mostly quite good. First and foremost, Boris Karloff is great as Dr. Frankenstein, playing the doctor for a change rather than his monster! His iconic and distinctive voice is perfectly suited for animation. Gale Garnett plays her role really well, fitting it like a glove. Phyllis Diller's performance is bizarrely awful, with a terrible (and terribly frequent) laugh. And finally, Allen Swift does great with his workload of voicing literally every other character in the entire movie! Guy's vocal cords must've been sore as hell!

The musical numbers are ok, with some being better than others. They're also a bit too infrequent. The singing is all fine, though. Probably the biggest complain one could have with the songs is how unspooky they are. 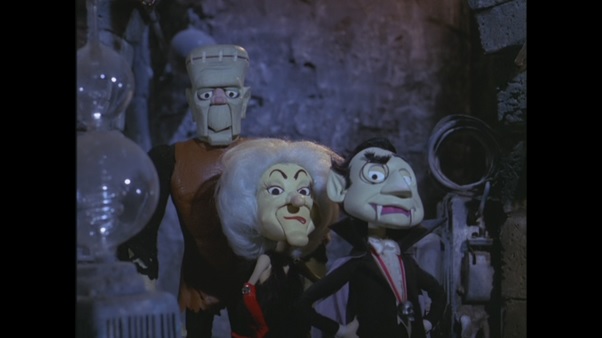 The stop motion animation is really good! It's jerky in that old stop motion way, but that's not a problem. It's actually pretty nostalgic and endearing! I LOVE the film's look, too, from the ooky sets, to the distinctive characters. It would've taken some talent to make these puppets and models, as well as to undertake the no-doubt arduous process of animating them. The crocodiles and bats don’t look as good, but the latter are safe from my criticism by being adorable!

Mad Monster Party wasn't nearly as good as I'd hoped,but I'm glad I saw it. If nothing else, it's worth watching at least once, and I'm glad that Rankin-Bass made a horror-themed movie like this...
Posted by Chris Hewson at 12:42 AM