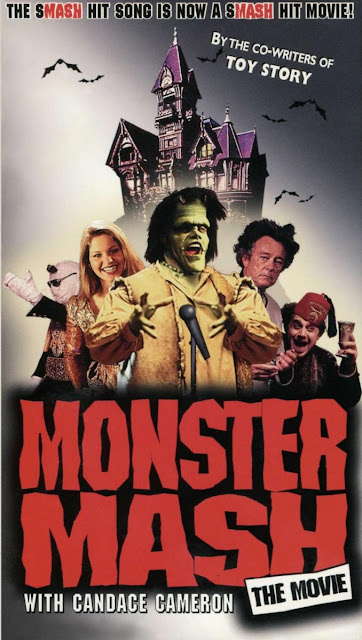 The first film I'll be looking at this October comes courtesy of a very familiar song. No doubt you've heard Monster Mash, by Bobby 'Boris' Pickett? If not, it's a classic Halloween staple that's endured for around 50 years, for good reason! In 1967, Pickett and others produced a stage play with what is quite possibly the best title in existence! I'm Sorry, the Bridge is Out, You'll Have to Spend the Night. Yes, really! Unfortunately the 1995 movie adaptation I'll be looking at today didn't keep that amazing name, going by the simpler Monster Mash... 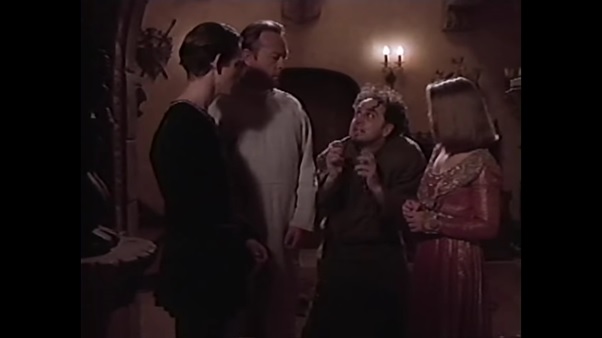 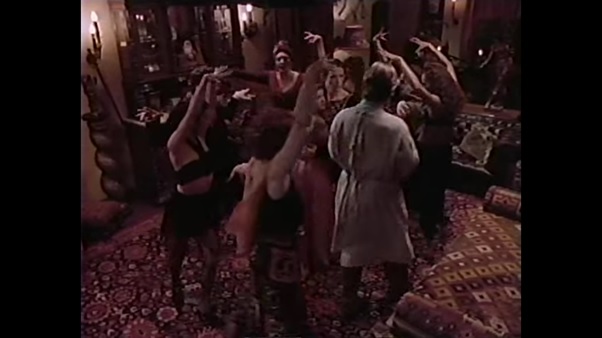 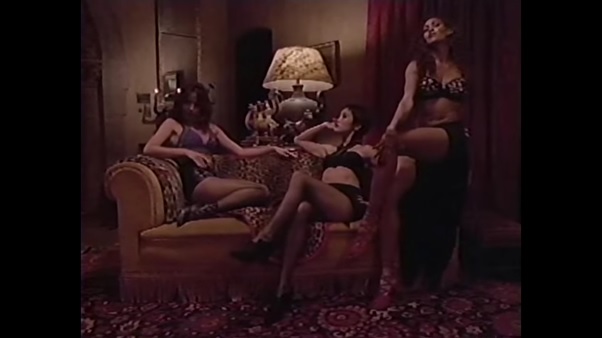 Mary and Scott are a young couple headed for a Halloween party when their car breaks down, and they go to a nearby castle to use a phone to call for help. The servant Igor tries warning them away at the door, but they stay too late, and the excited Dr. Frankenstein notices their presence, beckoning them inside. Before too long, lightning seemingly destroys the bridge leading to the castle, and the 'good' doctor allows the couple to stay the night. They realize that Frankenstein, nor the other guests staying at his humble abode are all that hospitable, and they try avoiding the advances of monsters like Dracula, his wife, the Wolf-Man, a servant to the Mummy, and more, all the while, Frankenstein has his own dark plans for Scott's brain... The story to Monster Mash is entertaining. In some respects, it feels like a more kid-friendly version of Rocky Horror. The majority of the movie is different, but there are those same thematic cues, like the young couple whose car is stranded in the middle of nowhere, leading them to a castle for help, where a mad scientist takes quite the interest in them.

The plot is pretty decently written, and progresses nicely. I like how all these different parties want the couple, for different reasons. Other elements didn't work as well me on first viewing like the super 90's hip-hop Fresh Prince of Bel-Air type character, which I felt really didn't fit into a spooky Universal-inspired horror comedy...However, I DO like the fact that such an against-type character is the one who wants to sacrifice a virgin to resurrect a mummy. 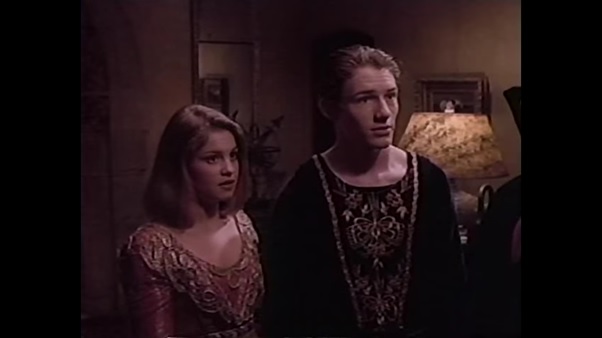 The acting in the movie is decent to great. I got definite Frank-N-Furter vibes from Bobby Pickett. He's great in the role, exuding this sort-of deliberate transparent jovial attitude, with barely concealed true intentions, getting across the hilarious mix looking simultaneously like an accepting host, and someone who'll tear you to shreds in an instant. You don't believe a word the guy says, and he knows it, not giving a damn. 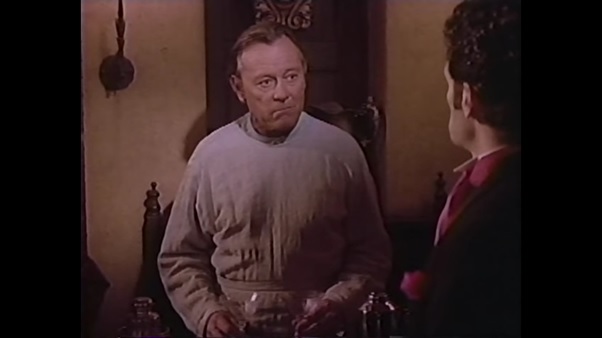 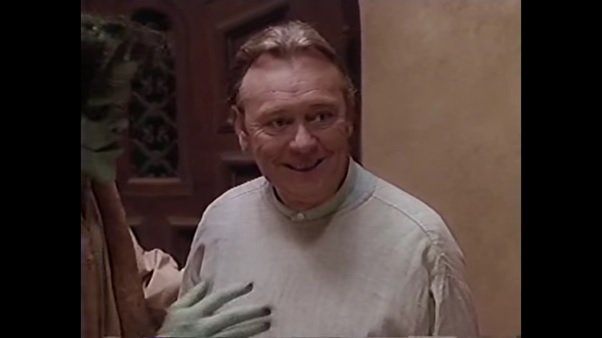 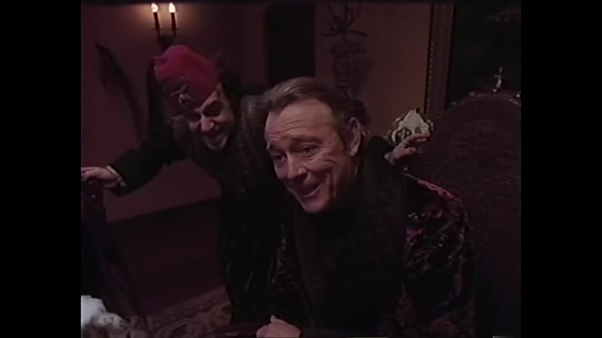 John Kassir straddles the line of amusing and grating. He's a bit of both sometimes. Candace Cameron and Ian Bohen are fine as the leads, though by default the least interesting characters. Anthony Crivello makes a fun Dracula, certainly looking the part, and Sarah Douglas as his wife is my second favourite character in the movie! Jimmie Walker too ranges from amusing to annoying. 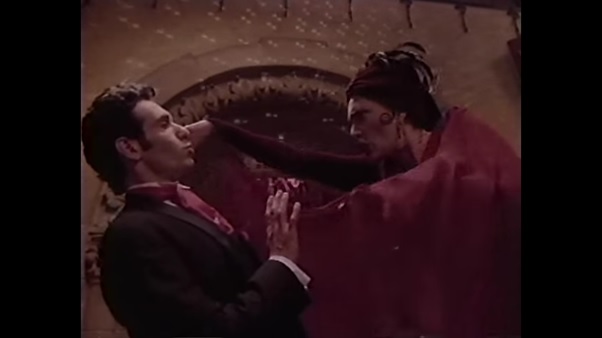 The humour in Monster Mash is pretty good. Some jokes get at least a little laugh, while others not so much. Some of the humour is overt, some subtle. As for gags I disliked, I didn't much care for the Elephant Man line joke, nor for a weird joke involving Scott and his maths teacher! The film is never unfunny though. A couple of not-so-good jokes here and there, but never consistently bad or anything. The dialogue is downright golden in some places, from lines like "Permit me to introduce you to my wife, Natasha. She's also a Count, but she spells it differently", to Frankenstein's wonderfully alliterative put-downs, usually aimed at Igor.

As an adaptation, there are apparently several changes from the source material, including added songs, removed songs (what?!), and various pop culture jokes that weren't present in the original play, such as Elvis Presley being the Mummy (he was of course very much alive in 1967), a Beavis and Butthead gag, then-modern political gags, etc. Some of these are worth a chuckle, but others fall a little flat. As for dialogue and character changes, I don't know what's different from play to film. 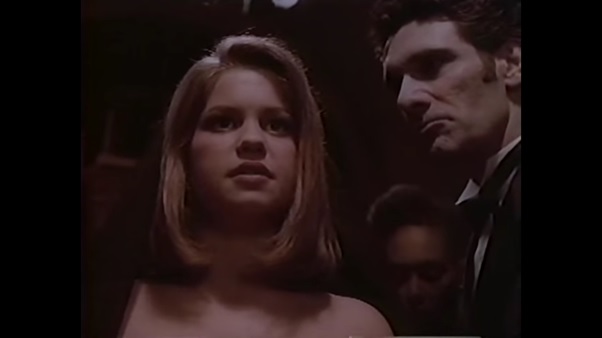 The effects in Monster Mash are good for what they are, and the location and sets look pretty good. The costume for the Frankenstein Monster is cheesy, but fun. Oddly enough, it kinda looks like Elvis! I have to wonder why he isn't The King, when the Mummy only has a couple of tiny scenes, and is unrecognizable as who he's meant to be. I suppose the reasoning was that Elvis as a mummy clad in bandages was fine, but Elvis' visibly hacked-up corpse stitched together and reanimated may have been a little disrespectful, maybe? The 'Wolf-Man' is a little inconsistent, and unfortunately we don't see the transformation. It's offscreen! And we don't see Mary's reaction to it either. It's just next scene, he's a werewolf, and the two leads aren't all that fazed in the slightest, despite not knowing anything supernatural is up yet. The rest of the effects are ok enough. The opening credits are pretty dull, though. 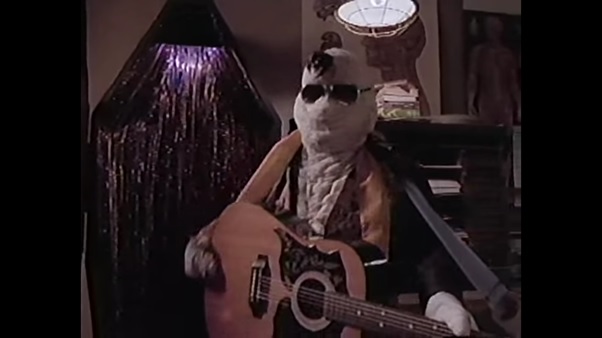 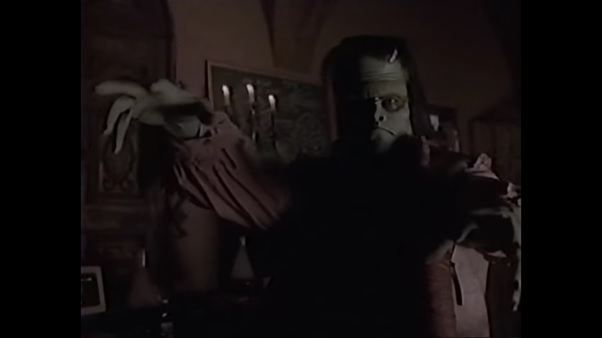 Onto the soundtrack, I really like the movie's scoring (though it's not very ooky or scary most of the time), and the musical numbers are great fun, from the titular track, to Drac's blues, and more. The sound mixing on the titular Monster Mash song is weird though, as it doesn't mesh well with the spoken dialogue. Not a big deal though, and you adjust soon enough.

One confusing thing is the seeming lack of three numbers! Wikipedia lists there being nine songs, and these three absent ones are Too Late to Change Your Mind, a reprise of On a Night Like This, and They Came Back. In the movie, however, those latter two aren't even present, and the former is in the movie, but during the credits, after a Monster Mash reprise. Judging by the soundtrack listing in the credits, it's not the movie's fault for this confusion, but rather the Wikipedia page, which seems ill-informed in that one respect. Anyway, onto that reprise of the titular song. It's played over a montage of scenes, and also new footage corresponding more with the lyrics! Neat! And funnily enough, the Frankenstein's Monster effects look best there, when more in the shadows. 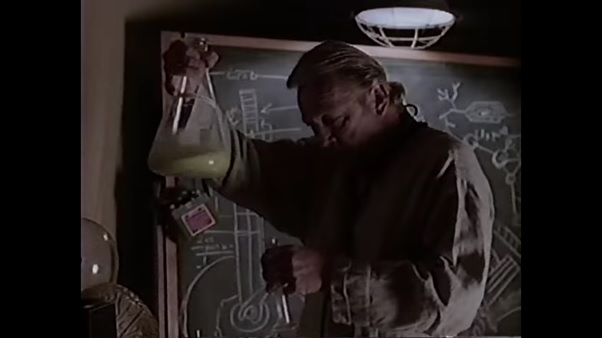 Monster Mash is a fun movie, cheesy but never terrible, and its positives far outweigh any drawbacks, with Bobby Pickett's performance alone being worth it. I definitely recommend it if you're in the mood for a freaky musical!...
Posted by Chris Hewson at 10:25 AM