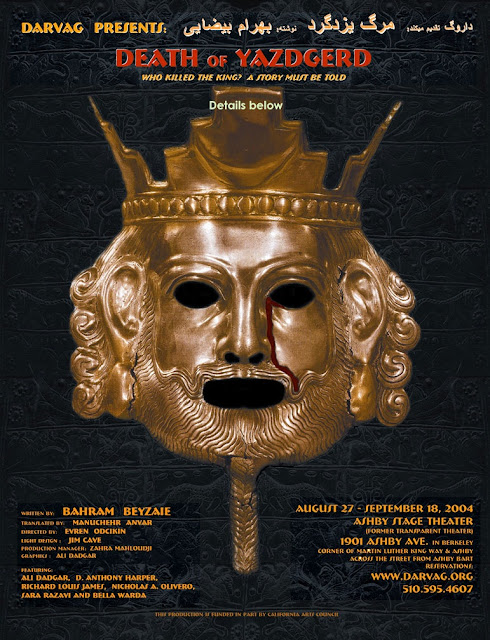 Persian theatre has a long and interesting history. Noted local director Bahram Beyzai, having written a book on the subject, has also penned many plays of his own, including 1979's Death of Yazdgerd, which he adapted to the big screen only three years later...

It's the middle of the Arab invasion of Persia. The fleeing King Yazdgerd is dead, and the Iranian millennium has concluded with his sudden and violent demise. He was seemingly murdered by a poor miller who desired the king's gold, but under threat of the brutal torture and execution of not only himself but his wife and daughter, the miller and his family concoct various accounts of what really happened, in the hopes of saving themselves. Will they succeed, or will their machinations backfire?... 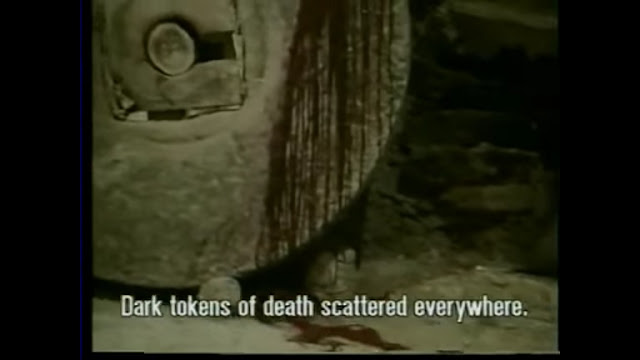 Death of Yazdgerd is quite a mixed bag of a film. It starts off with dialogue that feels like it's trying to fill up as much time as possible without really saying anything, but as it goes on, we get fascinating themes, with examinations on loyalty, duty, doubt, and the illusion of truth. Quite a list of interesting things for a movie I found merely annoying and somewhat pretentious to begin with!

Getting to the negatives, the first couple of acts are rather interminable. We're subjected to the Miller and his family telling various disjointed and contradictory stories of what happened, random flowery yelling, and various excuses from "He's not the king!" to "He's not really dead!", 'We didn't really kill him.' and 'We killed him because thought he was a thief. How were we to know he was king?'. They're so overly theatrical and obsessed with semantics, as if that's going to make an impression on the authorities. "Yes, we killed the king, but is death really the end, or is it just the start of a new beginning in life? Therefore we didn't murder him, but freed his soul to embark on a grand journey of enlighten...urk!". It's at that last point where I would stab them to death, and was hoping the authorities would too, if only to save me two hours of their inane nattering. 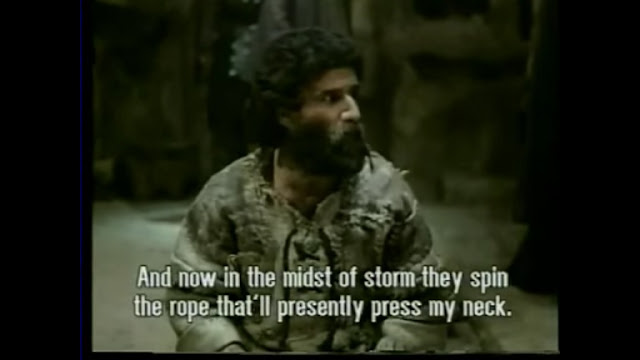 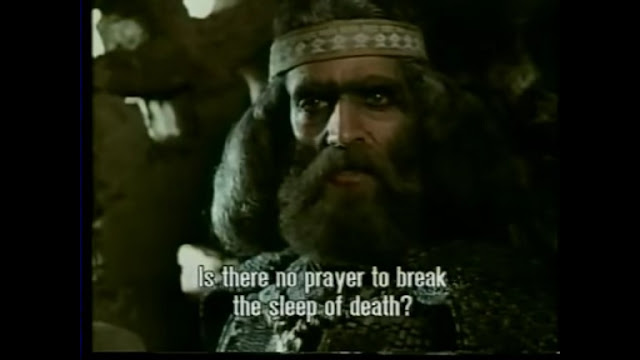 It's around the 40/45 minute mark when things start getting interesting. The story the family start telling at that point is actually a plausible one, and thus doesn't feel like it's wasting our time as well as the guards', and following that is when the prosecuting officials start to wonder if what they previously believed to be true is really a misconception.

Unfortunately problems once again arise, as the movie feels like it goes for to long, dashing its chance to conclude the story in a fitting matter in order to continue its yelling screed. I myself yelled at the screen to the characters, saying 'Will you performance artists shut up already?!'. I swear, they missed their calling by becoming a milling family rather than opening their own playhouse. 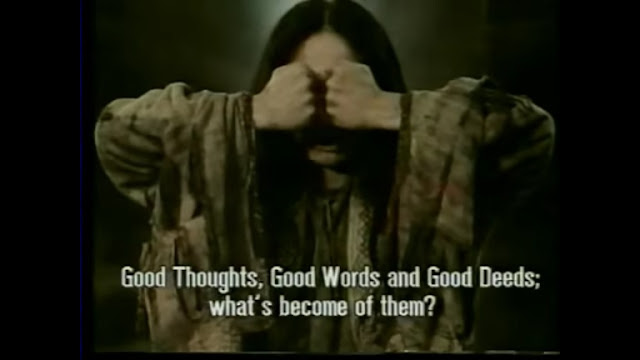 I didn't mind the ending, as it eventually comes to the conclusion it would have if not for the needless extension, but then the Arab army shows up, and it once again feels like the movie's extended itself past its natural endpoint. Then, after introducing all this new stuff, the movie has the balls to just abruptly end, without concluding any of this newly brought up story. Granted, this type of an ambiguous ending could absolutely be effective, but it's not here. Perhaps that's solely down to the movie already having felt like it naturally ended twice before, and without that issue, this would be a fine ending. I'm not sure. I'm also curious how the movie would go if it was trimmed down to about 45 minutes (preferably by removing the first 45), had a new section added, bumping it back up to at least 90 minutes, and was divided into two halves-The judgement by the Persian officials, and judgement by the invading Arabs. That's just me randomly speculating though. 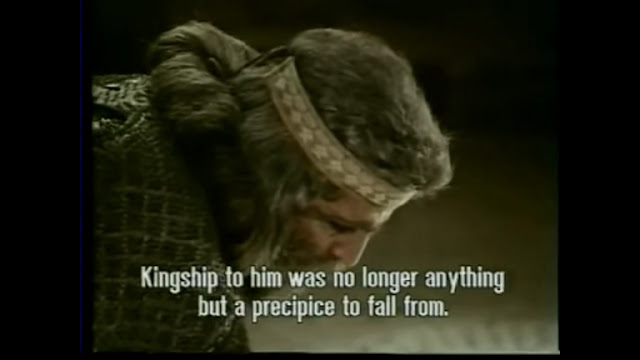 The writing on display in this movie is sometimes subpar, sometimes very good! Its presentation though leaves much to be desired. Perhaps if this story was to be adapted to the medium of film, it would've worked better as a flashback-heavy tale, like Rashamon, where we see multiple accounts, at odds with each-other. But then again, if no performances of the original play were ever filmed, then it's perhaps a nice treat seeing the equivalent of a filmed recreation.

One last thing to note regarding the plot is how much of an impression King Yazdgerd has over the events for a character we never actually see, besides a covered-up body. Speaking of that, assuming they didn't just use a mannequin to play the king, it must've been quite an easy acting job for that guy! Though less so on stage, I imagine. I hope the guy didn't get an itch! 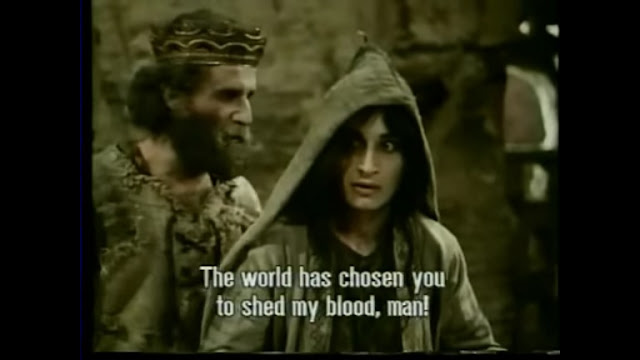 The acting here is...strange. Stage acting is different from the movies, for various reasons, given the different medium. What's considered normal for a theatrical production can feel overdone and/or unnatural in a cinema setting. Such an issue befalls Death of Yazdgerd. The performers are definitely passionate (with Soosan Taslimi being the best in my opinion), and they probably work great in a play, but come across a bit overly theatrical in a movie, like they're aiming for a back row that doesn't exist.

The direction starts out a bit lacklustre and point-and-shoot, but it perks up in the final forty or so minutes, with more interestingly staged visuals. As for the location itself, it looks quite good. The majority of the film is set in a rundown old building rather than an opulent ancient city, so I imagine it wasn't too hard on the set designers/location scouters.

The lack of much music at all definitely hurts the experience of watching this film. Many of the scenes could've been aided by some scoring, at least a little.

One surprising moment was seeing an abacus! Seeing such a recognizable object still in use in the modern day in a film set over a thousand years ago, looking relatively unchanged at that, is weird!

Finally, the original Death of Yazdgerd play has history stretching beyond the movie. It was revived in 2005 for a Canadian production, and again in 2014 in India, for Bengali audiences. Nice to see it's still enduring even to this day. The movie was sadly never released in its home country from what I hear, having been banned by the censors for not shaping up in their eyes. God only knows what problem they had with a PG film like this! Apparently the sole reason was that its actresses' heads weren't covered up. 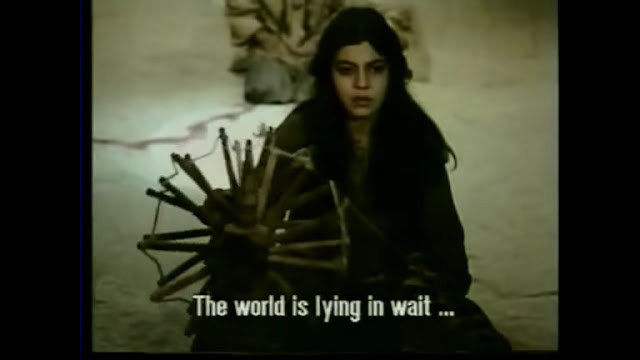 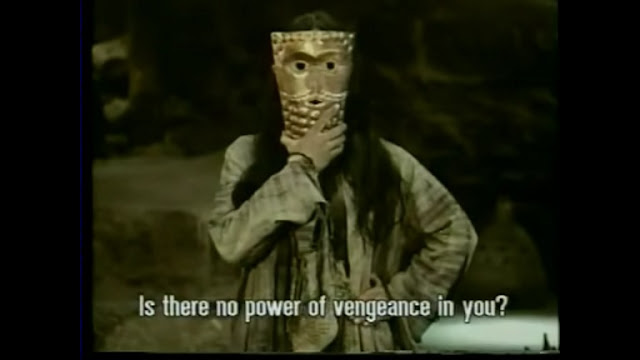 Death of Yazdgerd is a film I hesitate to recommend. It's got just as many good qualities as bad, and if you want an example of great Iranian cinema you could certainly go elsewhere, but if you believe in sampling all areas of a country's cinema before forming an opinion, then this comes hesitantly recommended...
Posted by Chris Hewson at 9:34 AM