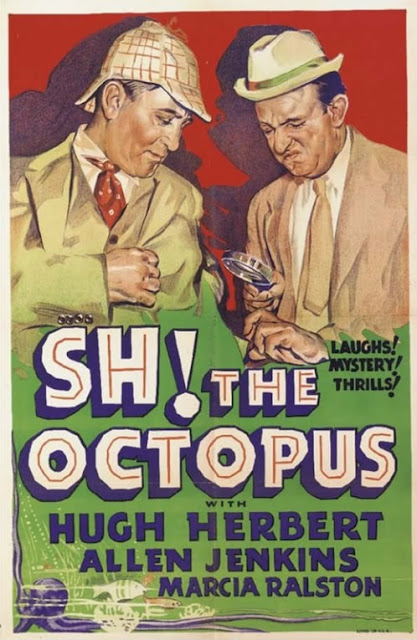 What a title! Sh! The Octopus. Sounds great, right? Well not to me it doesn't! If you're going to have punctuation in your title, surely you should go all the way? It should be Sh! The Octopus!. The title feels naked without the second exclamation mark!... 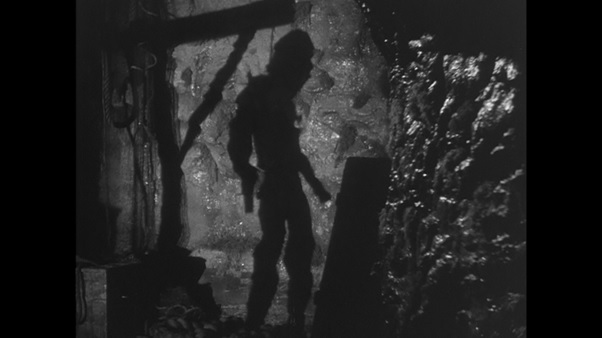 Paul Morgan has just purchased an out-of-order lighthouse, built on a small rocky island. Soon enough, he discovers weird things afoot. Meanwhile, two bumbling police officers, Dempsey and Kelly, run into a terrified woman, bringing news of her father having been murdered, by the crime lord known only as The Octopus. Seeing this as their big break, as well as a way of getting fast cash thanks to the standing reward for the arch-fiend's capture, the duo make their way to the lighthouse the lady escaped from. Upon arrival, they run into several other people, each with shifty backgrounds and potentially shady motivations, but they're all soon on the run when the lighthouse is attacked from all sides...but only by one adversary. It turns out the crime lord Octopus is also an actual giant mutant octopus! How ever will this band of unlikely characters get out of this mess? And who is The Octopus? Could it be one of them?... 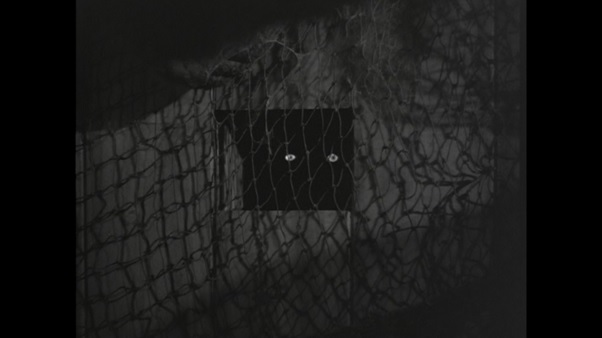 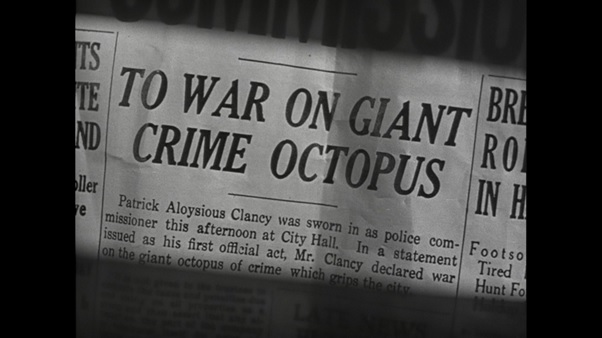 Sh! The Octopus is a very brisk mystery, running at only 54 minutes long! I wish it would've been longer, but there's no telling how that'd affect the movie. Given its rather small plot, it might've ended up running too long.

The plot here is a goofy little mystery, with an interesting setting, and a few twists and turns. Things progress pretty smoothly at first, but there's a bit of a lull in the last act, with more of characters bumbling around in dark grottos than discovery of clues and furthering of the plot.

I'll say nothing of the ending, except that I saw it coming exactly 10 seconds before it happened, thinking "Man, wouldn't it be funny if it turned out XXXXXXX". It's for that reason that the surprise doesn't piss me off. It's very tricky having this kind of conclusion, so I'm glad the movie pulled it off. It also made me pleased with previous revelations regarding pretty much all the characters (other than Kelly, Dempsey, and the villain), that I didn't like at that point. That contrivance ends up making total sense! And so do all the other little things that don't make much sense. 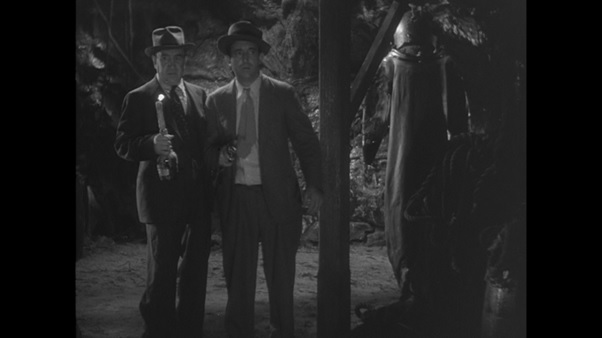 I really dig the concept of Sh! The Octopus, of a bunch of characters stuck in a small confined location run by a powerful villain who can watch and spy from all angles, having the metaphorical higher ground (or indeed, higher water).

Moving onto the comedy, some of the dialogue is a bit cringey, akin to a double act trying and failing to be like Abbott and Costello, but other lines are great, like when everyone's stuck in the cave system below the lighthouse and Dempsey says "C'mon, Kelly, on your feet, we've got work to do", leading the snarky Polly to respond with "You've got a nice place to do it in". Polly is full of snappy retorts. There's also a fabulous line involving world domination that I simply can't spoil! 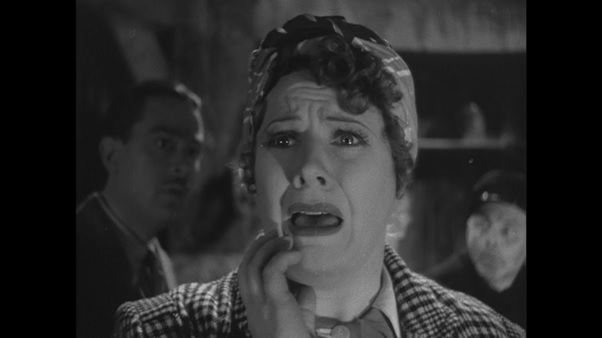 While the writing may be at times subpar, the creators of Sh! The Octopus spared no expense when it came to the effects, and they look great! Given its B-Movie nature, and obscurity, chances are it was a low-budget affair, and if so, the money must've gone to very good use. The story is mostly confined to the one location, leaving the production team to focus on key moments, which works greatly to their advantage. 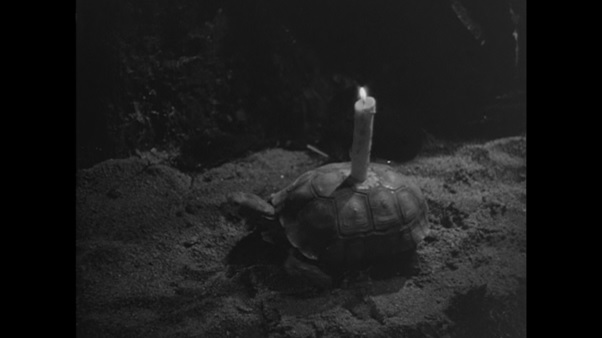 The effects on display that I can reveal include quite convincing octopus tentacles, which writhe quite convincingly. The octopus itself is decent in the one scene we see the whole thing. There's a phenomenally great piece of work in the climax, which has enthralled many on the internet, and is the reason this movie came to my attention in the first place! Probably the only effect I felt didn't impress was one at the very end, which was just...weird! 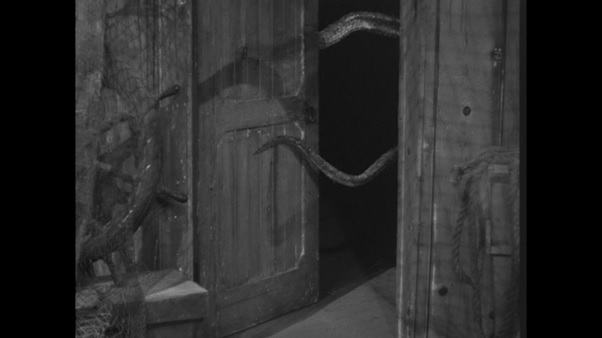 The direction in Sh! The Octopus is surprisingly good for a film of its type! This isn't a point-and-shoot production by any means, and is staged very well! The discovery of the body hanging in the lighthouse has got to be the best directed moment in the movie. It's genuine horror movie material.

The performances here are decent. The main duo of Hugh Herbert and Allen Jenkins can get a little annoying here and there, but nothing majorly bad. My favourite actor in the movie is definitely Margaret Irving, whose sassy and sarcastic delivery is a delight. Marcia Ralston in entertaining too, particularly with her Australian/Trans-Atlantic accent. The actor/actress playing The Octopus is also a lot of fun. Sure, they may be overdoing it a tad, but they seem like they're enjoying themselves, in a role they probably didn't normally get. 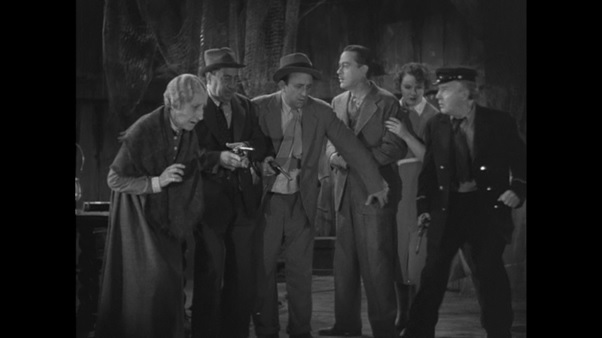 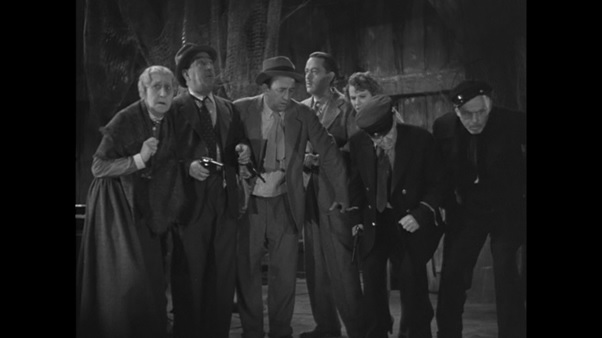 One last thing of note is that this film is a loose adaption of 1920s stage play The Gorilla, which itself was adapted three other times, with those productions actually bearing that name. I'm not very familiar with any of those, so I'm not sure how Sh! The Octopus compares. They certainly sound different! I'll have to check them out at some point (the ones that aren't lost, anyway).

Sh! The Octopus is exactly what you think it is based on that amazing title, and it's all the better for it, as it's a pretty good time! Not great, but certainly an entertaining viewing experience, as well as a showcase for some truly impressive effects work. May you stretch out your tentacles to find it, just like I did!...
Posted by Chris Hewson at 7:23 AM