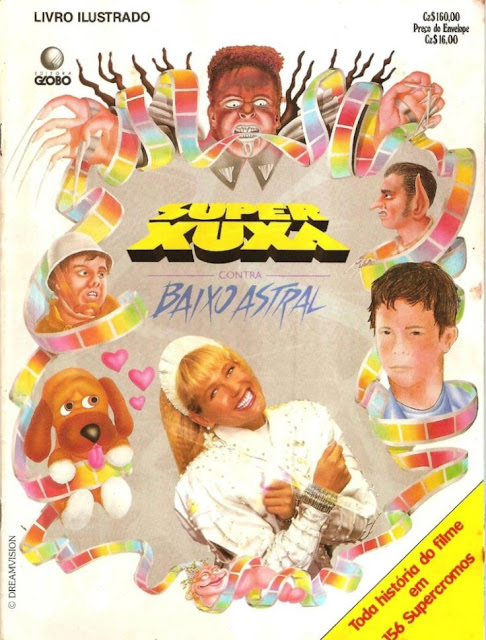 Xuxa, popular celebrity and friend to all children, is going around Brazil spreading joy and merriment, which the villainous Down Spirit cannot abide, sending his monstrous henchmen to kidnap her talking pet dog Xuxo. Tasked by her sentient bed to go to the land of dreams, Xuxa ends up on a strange odyssey, going through various bizarre landscapes and meeting their kooky denizens, and acquiring a sidekick in the form of a Gypsy caterpillar, all while questing to find the lost Xuxo... 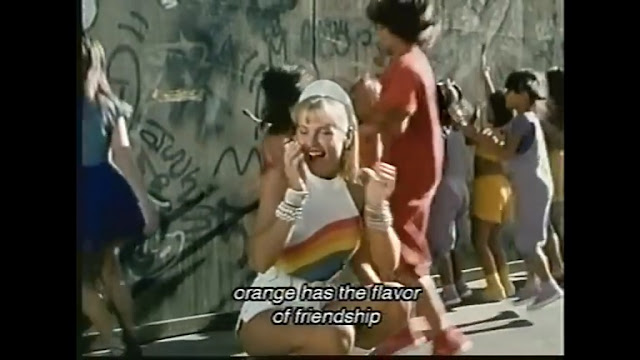 Super Xuxa Contra Baixo Astral is a real gem of a fantasy film as far as I'm concerned! It's known more commonly in English under its bootleg title of Super Xuxa Versus Satan. As admittedly awesome as that title is, the original is better, as the last word in Super Xuxa Against the Down Mood can possibly alternatively be translated to Spirit, which is a great double meaning. You know I'm always down for puns! Not sure if it's intentional, but fortuitous and unintended English puns in foreign movies get extra points!

The film has been compared with Labyrinth quite a bit, with some deeming it a ripoff, but really it's not that much like Labyrinth. It's about a female lead on a quest to reclaim a kidnapped loved one in a bizarre land, and there's an advice-giving creature living in a wall (in this case a caterpillar, not a worm), as well as an optical illusion involving said wall, and a 'things aren't always what they seem' type line (in a song, not as dialogue,) but besides that, the movies differ greatly, and if taken to court, you could totally see a case of plagiarism being tossed out. 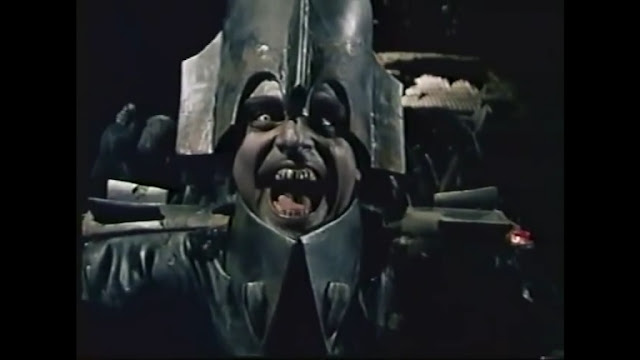 Super Xuxa Against the Down Mood is uniquely both a goofy  kids movie, while also being somewhat messed up in that wonderful way kids media from the 80s could be, ala Return from Oz, or The Dark Crystal, The NeverEnding Story, etc. It's highly imaginative, for sure!

While being childlike, the film also doesn't talk down to kids, and makes it quite clear how horrid adult things like heartless corporations, bureaucracy, and sensationalistic news programs can be. It has a good message come the end, and one that absolutely still applies today. This is a VERY relevant movie! 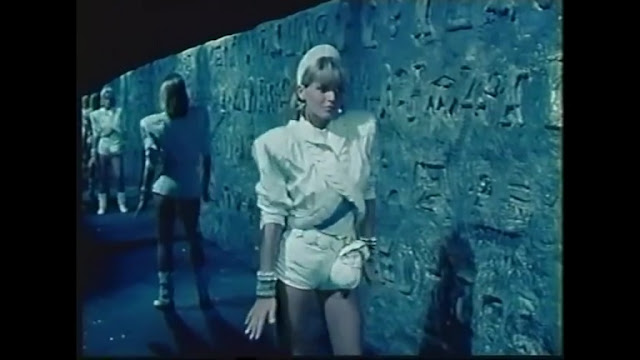 In-between all of this, there's a child character in the form of Rafa, and thankfully he's not annoying or cumbersome in the slightest! He may have been picked by Baixo Astral due to his potential for meanness, but not once does the kid ever side with the villain, so we're saved the awkwardness of seeing him commit horrid acts, and this also serves to make him a likeable addition, counter to all the movies where the child supporting character is annoying and unproactive.

The villains are an entertaining bunch, and we see plenty of them as the film goes on. Baixo Astral is equal parts goofy, and intimidating and creepy, given his looks and demeanor. One small gripe I have though is that it's a little annoying how Xuxa never interacts with the villains until the last half hour, when she reaches their domain.

There's plenty of great dialogue here, from "The next images are inappropriate to children, but we will show them anyhow", to "That cursed caterpillar ruined everything!", and "Goodbye, infamous monsters! Until never again!". I swear I will use that someday! 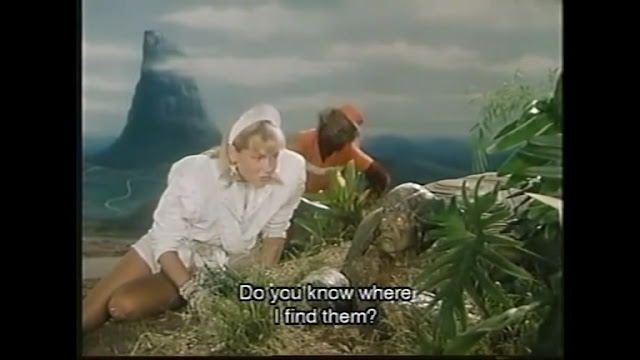 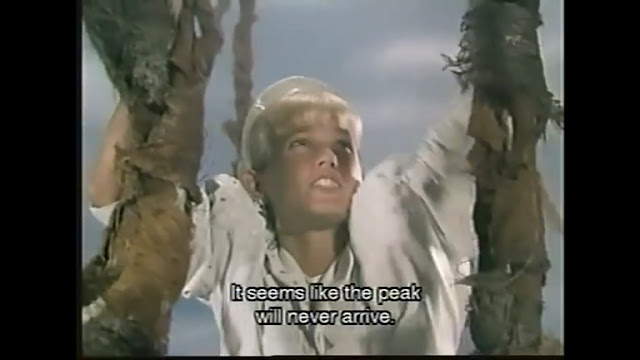 The movie's musical numbers are numerous, not too long, and well-paced from each-other. Some are a little too short, seeming to be very nearly cut off (one also going into fast-motion before sort-of petering out), but they're all nice tunes. Some possess lyrics that interestingly focus on subjects like environmental degradation, big businesses, and more. A few of the songs present have a bit of a Kim Wilde/Toni Basil sound to them, and you better believe that's a good thing in my book!

This is in Portuguese, so once again I can't fully judge regarding the acting, but it seems fine, with exaggerated and fun performances. Xuxa's reaction upon discovering Xuxo's kidnapping is pretty bad, but that may well have been intentionally over-the-top]. Speaking of, she's an entertaining lead, possessing charisma, and a nice singing voice. Also, for someone who wanted to hide her past as a nude model (because Brazil apparently wasn't as liberal as its reputation has suggested), Xuxa sure likes showing off her legs, and I am very grateful! 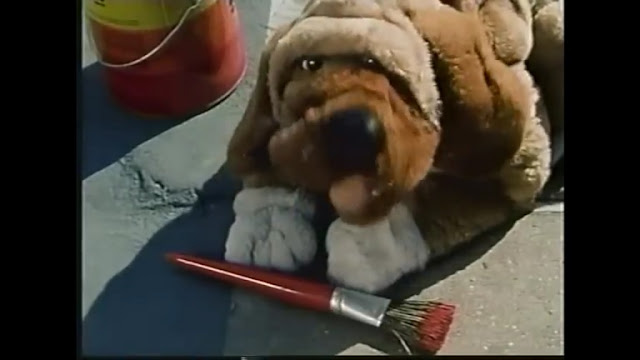 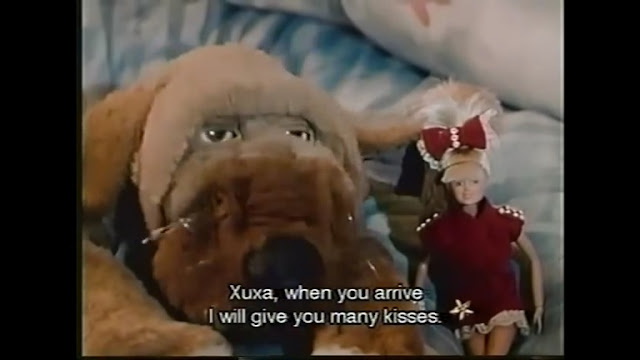 Guilherme Karan gives a delightfully schizophrenic as the lead antagonist, going from grinning and cackling one second, to pissed off and raving the next. I especially loved how the actor has the ability to not just mug for the camera, but to come across as genuinely manipulatively malevolent in places, and can be creepy based on what he's saying, and not just in how he looks.

Super Xuxa looks super neat! Regarding its look, cheap isn't the right word, as this production looks like some money was spent. Unconvincing is a more appropriate descriptor, but in a deliberate and endearing sort-of way. The effects and locations are creative and stylish, with never a dull moment visually. The only one that didn't impress was the first bird man in the treetops, who's just wearing a fake nose and a leotard rather than a proper costume. The animatronic puppet for the caterpillar Xixa (confusing names!) is good, as is the one for Xuxo, which is also simply adorable! My favourite effect in the movie is the great Labyrinth logic scene, which is like that movie, but doesn't copy it, instead coming up with an original eye-bending maze trick, much to my delight. 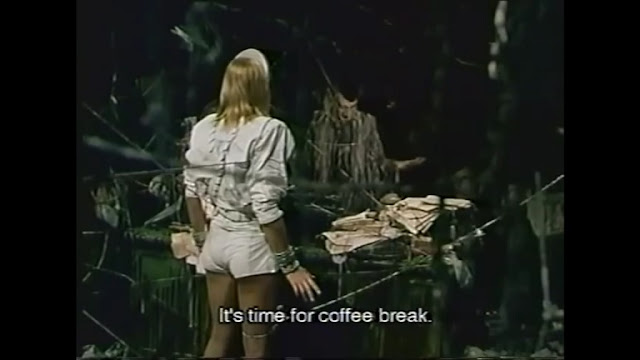 Super Xuxa Against the Down Spirit is a super fun, sweet all-ages fantasy romp, and it deserved its long-standing position of Brazil's highest-grossing movie. I highly recommend it...
Posted by Chris Hewson at 9:04 AM