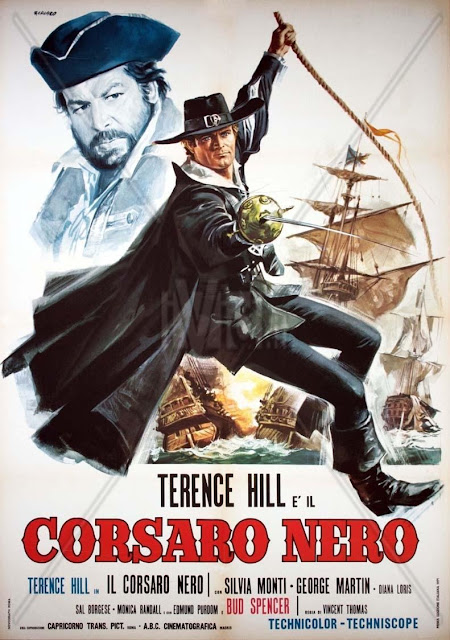 I've been a huge Terence Hill-Bud Spencer fan for nearly 10 years now, but I still haven't had the time to spotlight any of their movies on this blog. It's finally time for that to change as I dig into 1971's Blackie the Pirate...

Don Pedro is a down on his luck 'nobleman', who encounters the corsair Blackie during a barfight in his girlfriend Manuela's establishment. He decides to help the man out in order to make some money, and ends up embroiled in quite a caper as Blackie buys some women in a pirate auction, one of whom turns out to be the wife if the local viceroy. Isabel is more than happy to make a deal with Blackie, especially after he beds her, but following that, the rogue seems interested only in sending her back to her husband and getting a reward, earning the woman's ire. However, it turns out that was a wise movie, given Isabel's duplicitous nature* and with the begrudging assistance (in-between hostile encounters) of another pirate, Skull, Blackie and his crew vie to make the theft of the century against the viceroy and the vast shipment of gold he's moving... 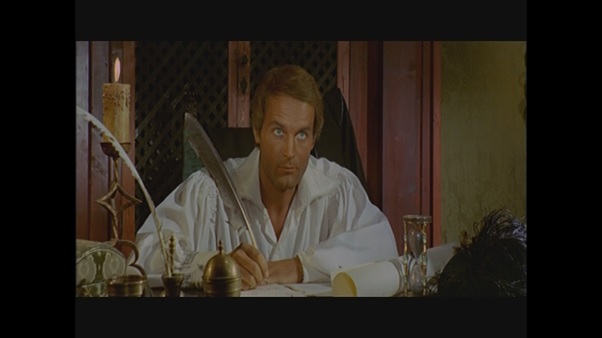 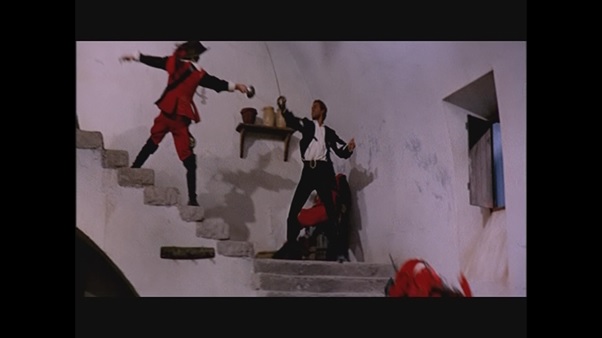 To start off, Blackie the Pirate is considered the odd Hill-Spencer film out in that they're not a buddy duo in this one, instead being full-on adversaries. They do end up on the same side most of the time, but not like in their other movies. There are long patches of film where Spencer isn't even present, with Hill getting much more to do, though he does at least get a decent amount of screentime. The other thing making this a strange/unique entry in their extensive canon is that it's a pirate film! Not a western, or a present-day set story, but rather a swashbuckling tale of corsairs and doubloons, fair maidens and dashing rogues. 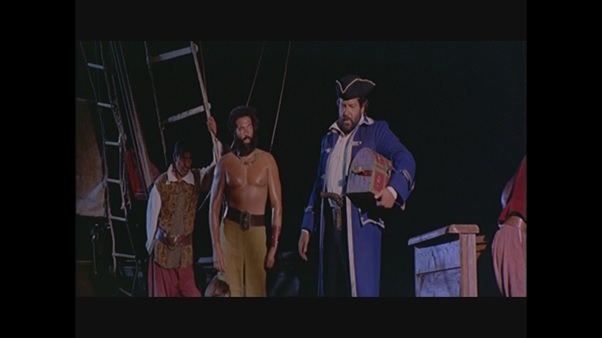 This movie isn't really a comedy, but more of a lighthearted swashbuckler. There are some amusing moments, and funny lines, but overall it's not trying to be hilarious or anything. The plot is unfortunately the weakest link present. I knew what was happening, but a lot of the time I was sketchy on the why.  Compounding matters is that the so-called 'villains' get neither the screentime nor motivation they deserve. Edmund Purdom's viceroy doesn't even do anything wrong, besides want to see the pirate lead behind bars, and the dude gets stabbed! Quite quickly and anticlimactically too. Blackie the Pirate has quite a high body count, given what it is! As for Isabel, the problem with her is that she and Blackie really don't share enough screentime to have much of a connection, and the somewhat confusing plot regarding her doesn't help matters. 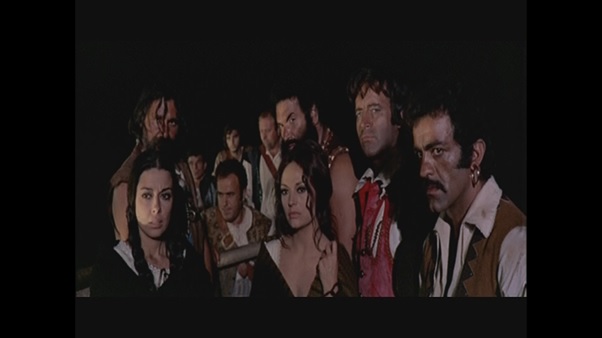 Another issue I have with the movie is George Martin's character, who's supposedly the lead, but since he's neither Terence Hill, nor in the title, there are quite a few scenes in the first half where he's fighting for screentime. I kinda wish his character would've just been excised entirely, and made the whole affair be less muddled, but on second thoughts, I like his arc and contributions, as well as Manuela, so I guess he can stay.

The action is decent here and there, some moments less so than others. The first ship battle is unengaging, mainly due to the lack of music. Bud Spencer's final scene makes up for that though! The fight choreography is good, however the final sword battle is laughable, as the footsoldiers are only wearing skimpy vests, making it all the more apparent that they're not really being stabbed. The funniest part of this scene is when one soldier being stabbed by a pirate is achieved by the latter actor passing the sword along in his lunge for the other guy to clutch between his arm and chest, facing the other side of the camera so it 'looks like he's been impaled'. Ah, that old trick! 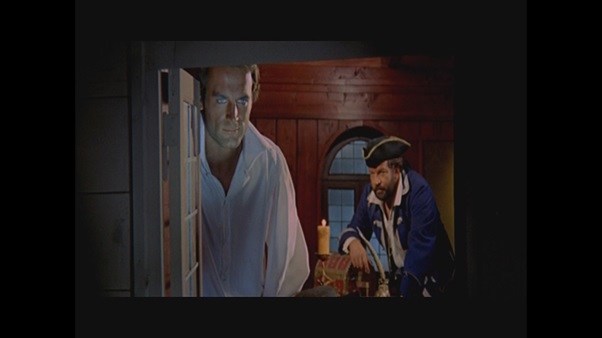 The dub acting isn't that great. It's decent sometimes, and stiff in others, seemingly because of the performers trying to sync up with the original actors. Regarding them, they all look fine, though I can hardly judge their vocals. Sigh, I do so prefer it when Hill is dubbing himself, or when they at least get the dub actor who did his voice in My Name is Nobody, and the Trinity movies, because that guy actually sounds like Terence Hill!

There's quite the cast here, with Hill and Spencer of course, George Hilton...err, I mean Martin (I swear, I'm always getting those two mixed up!), Edmund Purdom, Luciano Pigozzi, Diana Lorys, Sylvia Monti, and Mónica Randall!...Yes, I'm aware most of those names are likely completely unfamiliar to you... 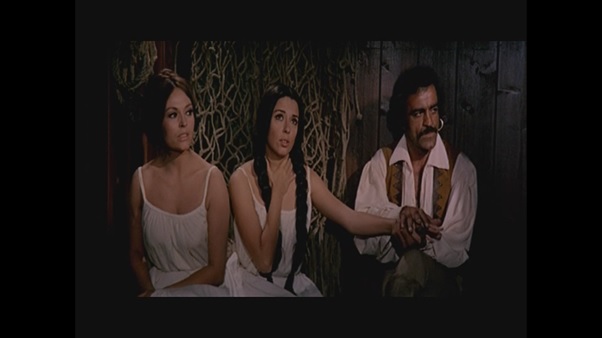 Blackie the Pirate is most certainly a mixed bag in the looks department. The sets and costumes are all excellent, but it seems like the budget was sunk on those, as all the ship battle footage is pinched from other movies. The use of stock footage is obvious given its grainy look, and nowhere is the   more apparent than in the sinking of the Fury, where we never even see the ship, just the cast reacting to its destruction. There's also when the Erebus is being emptied of its contents, cutting back from the high quality Bud Spencer, to the low-quality stock footage, also looking like it's been put through a wacky filter.

The score is a fun, rousing addition, and possibly the best thing about the film next to its aesthetic, especially the main theme, which I guarantee you'll be humming for days afterward! 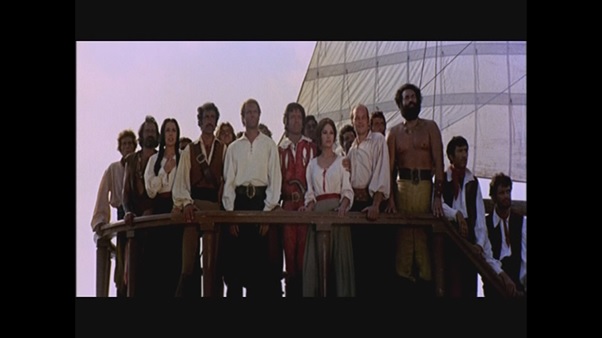 Blackie the Pirate isn't the best Terence Hill-Bud Spencer movie. Not bad, but you could do a lot better. I still recommend it, but just don't start with it if you're interested in the duo...

This has been a review for Movies Silently's Swashathon...
Posted by Chris Hewson at 9:46 AM