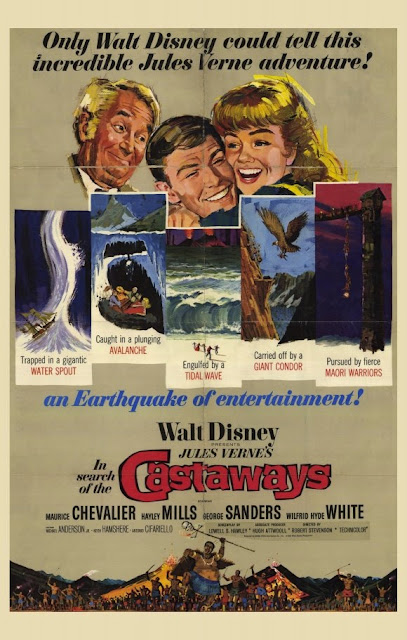 Teenager Mary Grant and her younger brother Robert, accompanied by the older Frenchman Jacques Paganel, are convinced of the survival of the seafaring father, lost at sea some time ago. After some trial and error, they successfully enlist the help of Lord Glenarvan and his youthful son John, and the party sail to South America, where a message in a bottle leads them to. Dangers abound in the wild Patagonian mountains, yet landslides, man-eating tigers, and torrential floods will end up being the least of their worries as their quest takes them across the globe, hoping it will ultimately not be in vain... 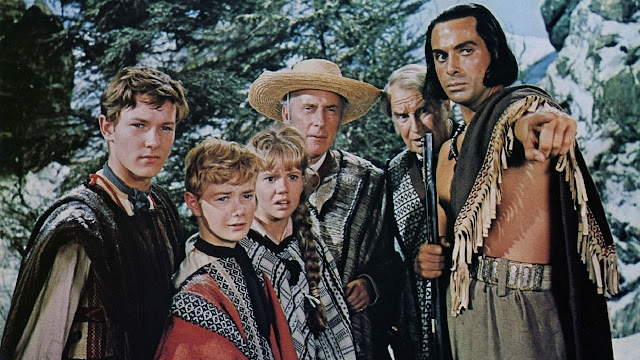 In Search of the Castaways is a really good Buena Vista/Disney yarn, and does the spirit of Jules Verne well. I've never read the source material, so I don't know how faithful it is, but it's at least got the feel down pat.

Castaways is a very globetrotting movie, traversing from the Patagonian mountains (the Andes?), to the dark and menacing continent of prisoners known as Australia, and the volcanic tribal lands of New Zealand. The South America segment lasts so long to the point where I thought it was the whole movie, and I may have actually preferred that to what we got. I think what it is is that I would've rather had is an adventure throughout the width and breadth of the one large location, rather than needless globetrotting caused by idiocy, as ends up happening.

Beyond that, my biggest hassle with this movie is the unbelievability factor. The avalanche scene instantly stretches credulity to breaking point, and is immediately followed by the cliff and eagle bit, which is a stunning case of good and bad luck. Then, before the impending search for the missing Robert can gain any tension, the bird is immediately shot down by someone, saving him. From then on, everything that can go wrong for the party seems to go wrong, and it's all very convenient (well, 'convenient'), yet still greatly enjoyable. 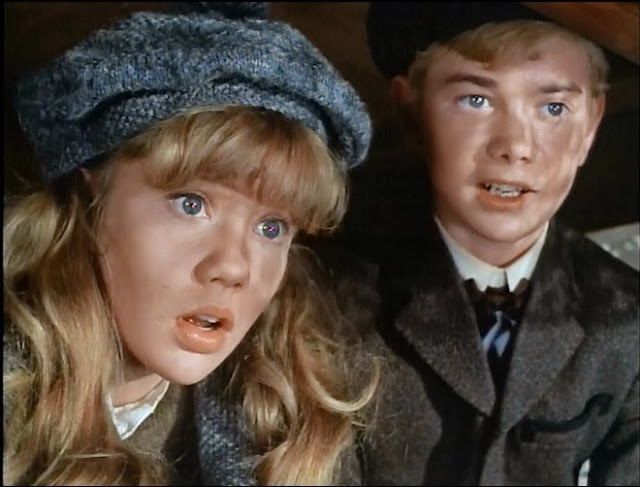 I wasn't really a fan of the New Zealand section. The volcanic resolution paints the leads as massive assholes, even if the script doesn't realize it, and the scene also continues to showcase from where Journey to the Centre of the Earth left off regarding Jules Verne's..ah...lack of expertise when it came to geology.

The presence of the...uh, 'certain' prisoners of the Maori tribe is not very well explained, partially due to the writing, and also because it's hard to make out what Bill Gaye is even saying, due to his leery nattering. In any case, I have no idea why he was a prisoner of the Maoris, nor why they were still keeping him around. Or why he went to crazy, for that matter, when the 'other prisoner' we see later on is fine, and has spent just as long in captivity. And how did Gaye's hair grow so long after only two years?!

Oh, and may I say that for a party who wanted to go to the Indian Ocean, I find it rather strange they sailed to the East side of Australia!

Onto the acting. Maurice Chevalier is somewhat annoying, but also fun, and Wilfrid Hyde-White is very amusing. Hayley Mills is great, Keith Hamshere is barely noticeable as the younger brother, but isn't bad, while Michael Anderson Jr. fares better as the Lord's son.

George Sanders makes for an ok villain, but takes forever to show up, doesn't really do much after the mutiny scene, and is defeated very easily, with little fanfare. Wilfid Brambell of Steptoe and Son fame plays the deranged Bill Gaye with the grungy lunacy you'd expect, and Jack Gwillim shows up briefly before the end, delivering some decent emotions. 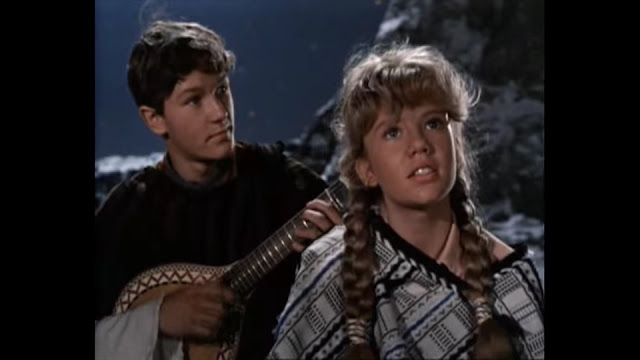 One casting decision of note is that the filmmakers actually got a Maori actor to play the tribal chief in the New Zealand segment! As for the Indian chief Thalcave, well, they got an Italian actor, and...err, Italian is basically Spanish, and Spanish is sorta South American, kind-of?...

The effects on display in this movie are fantastic! There are many great locations, sets, matte paintings, and other fabulous visual moments to behold.

Something that confused me about Search of the Castaways is its status as a musical. Is it? There are a couple of songs, which I suppose you'd expect from a Disney film, but then we only get those two and nothing else for the remainder of the film. Strange, but the songs are nice, sung well, and work within the context of the story.

While it has its problems, In Search of the Castaways is still a rousing adventure, and highly recommended. And who doesn't like Hayley Mills, I tell you?...
Posted by Chris Hewson at 10:00 PM