Sergiu Nicolaescu was a noted Romanian director who worked from the 1960s up until his death in 2013. He dabbled in various genres, from comedies, to historicals, and crime. Today I'll be looking at two of his movies from the 1970s... 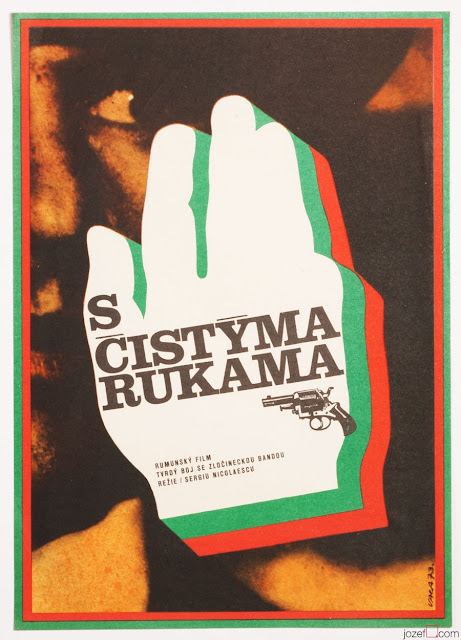 Mihai Roman is a former rugby player, former prison camp occupant, and current agent of the Communist party of Romania. Following the war, he's given the position of Commissioner in the police force, in order to help bring some order back to the chaos that's filled the streets ever since the end of hostilities. Partnered with the trigger-happy Tudor Miclovan, Roman investigates a fellow policeman's murder, leading him to a plot by the criminal known only as Semaca... 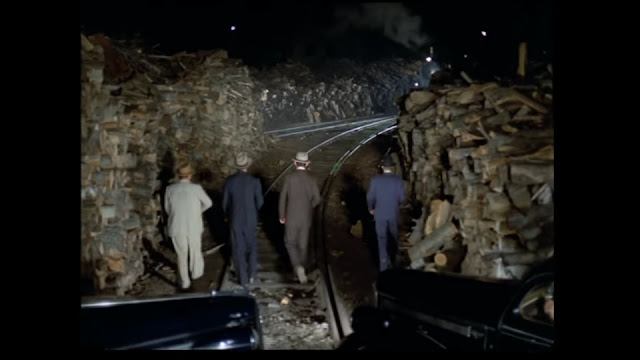 Cu Mâinile Curate is a 1940s style noir by way of the 70s. The plot is standard stuff, and not the best, but it's pretty serviceable, and acts as basically an excuse for violent police standoffs, and explosions.

Mihai Roman is your typical reluctant hero. Quick to brood, sworn to do his duty, and having a bad habit of getting his friends killed. He's an ok lead, but not very interesting.

Tudor Miclovan is described as a womaniser, and a dandy (or 'mallaganbisdolla' in Romanian), but I didn't really see it, nor any visible prowess with the ladies. He seems more like a psychopath, more than happy to gun people down in cold blood, while grinning like a madman. One scene I didn't really get was where Miclovan shakes down a bunch of crims for their money, criticizing them for being so greedy when others are starving...then he gathers all the money up and sets it alight! Dickhead. Having been accidentally spoiled regarding what becomes of him, I was actually quite looking forward to his fate! 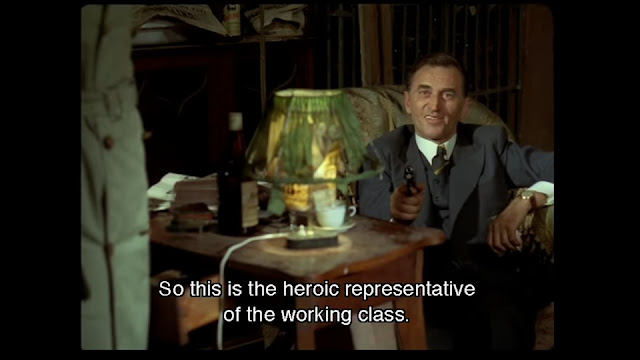 Patulea is a waste of a good character arc. A former torturer of Roman in a prison camp and now his seemingly reformed boss on the police force, there's understandably bad blood between the too, but the writing seems to be painting a more complex picture. Unfortunately it quickly abandons this and reduces him to a one-dimensional baddie who gets unceremoniously axed off less than halfway though. I did at least like how this direction really allowed previous simple acquaintances Roman and Miclovan to team up in a believable way.

She's only in the movie for about a minute, but I liked Charlotte the prostitute. She takes things in stride, and doesn't let her client being help up by the police at gunpoint ruin her sunny disposition. 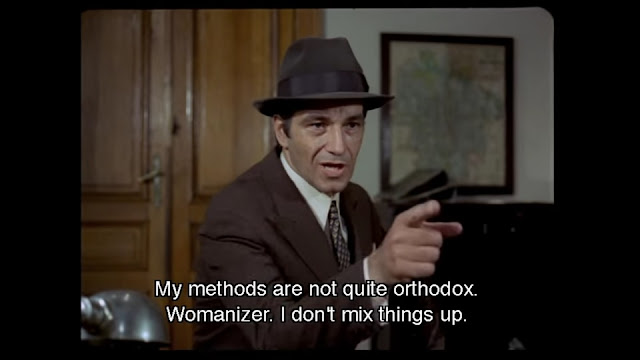 On the action front, Cu Mâinile Curate is hilarious! Hundreds of shots are fired, cars blow up and/or flip over at the slightest provocation, tanks are used for simple bank robberies, and trains are guided off-track for precise assassinations, it's ridiculous! It seems by the end that half of Romania's population has been caught in the crossfire.

The music is pretty good! There are a few tunes that really get you in the mood for a swingin' 70s cop flick! One musical number is ok, albeit hilariously dubbed over. Richard Oschanitzky did a great job with the sometimes jazzy soundtrack. The final confrontation is disappointingly devoid of music though. 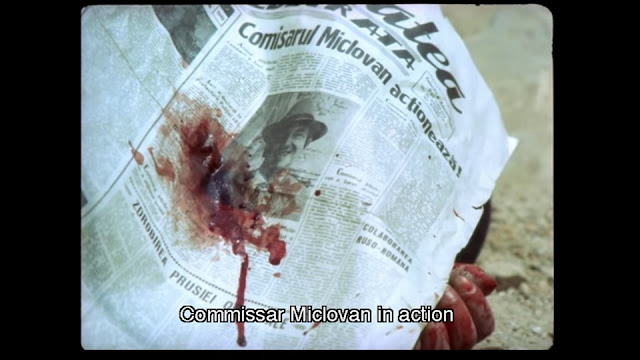 From what I could tell, the acting was decent enough. Some of them were overdoing it a bit, but it all seemed fine, I guess. A lot of the actors reminded me of other people. Alexander Dobrescu of Patrick Macnee, Sergiu Nicolaescu as Guilano Gemma, and Ilarion Ciobanu of someone I couldn't place. Maybe Sam Neill? Richard Gere? An old teacher from school? I dunno.

There are some pretty flashy effects on display here, and they certainly lend something to the production, ensuring it doesn't look cheap. The film isn't really trying for a 1940s look, but maybe 1970s Romania doesn't look too different than it did 30 years prior? I didn't notice anything too egregious, like modern day appliances, though it's certainly possible there are if you look close enough. 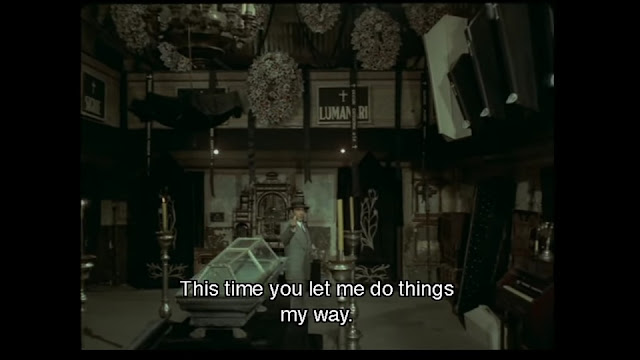 While we're still talking aesthetics, in my brief search I wasn't able to find pictures of the original Romanian posters for these movies online, but I did find Czech ones, and as we all know, both the Poles and the Czechs are highly regarded for their surreal, minimalistic, and often fucked-up poster design! So it was definitely a neat find then.

Cu Mâinile Curate is a decent crime movie, but quite silly at times. While this makes it more enjoyable than it otherwise would've been, it also drags it down a bit. Still though, as far as B crime pictures go, it's not bad... 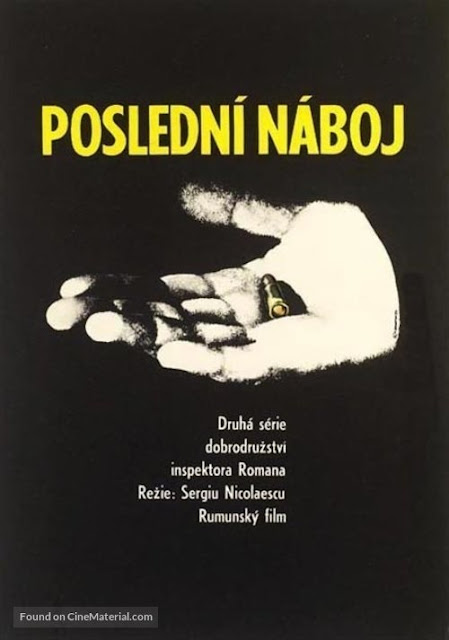 Following the events of the previous movie, the crime lord Semaca has been found not guilty of all charges, and is released, immediately using his newfound freedom to hatch a nefarious plan to destabilize the Communist party. It's up to the determined Commissioner Roman to find evidence of wrongdoing, and put a stop to it, in order to save his government, and avenge his partner...

The plot to Ultimul Cartuş is quite interesting, but the execution is boring! It doesn't feel like there's a good reason for it to exist.

The film definitely lacks focus, and jumps from one thing to the next without really leading up to or resolving them in a satisfying manner, throwing in some gunfights every now and then in an attempt to spice things up.  First there's a protest turned violent, then Roman just so happens to get a tip about illicit arms that leads him to Semaca's brother, Roman is later arrested by National Security for improper work, then without warning he's is suddenly undercover as a priest in a mountaintop village searching for a guy I'm pretty sure we hadn't heard of up until this point. It's all over the place! 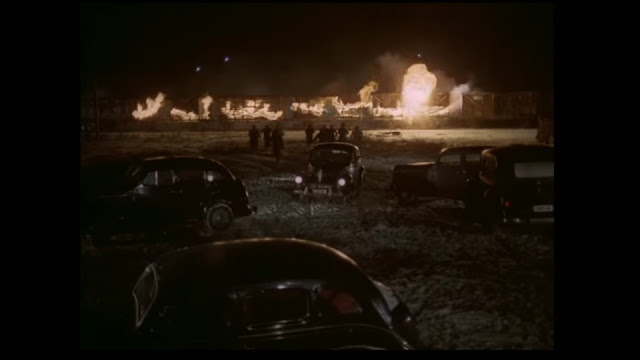 The absence of the more charismatic Miclovan really goes to show how dull the milquetoast Ciobanu is when on his own. Nicolaescu's character might not have been likeable, but he was interesting enough to keep your attention. Roman isn't. Ilie makes for a pretty unhelpful sidekick for the majority of the running time, but becomes hugely proactive in the climax, actually getting to be behind the wheel in the dramatic car chase! On that note, I kept waiting for Roman to accidentally shoot him and crash the car, given the way he kept gesticulating while holding his gun! Also, given Roman got his brother killed last movie, I was wondering if Ilie was going to die as well. This whole family wiped out all because they had to serve as dramatic motivation for the brooding protagonist! He makes it out ok though, which is good.

The villains are a dull bunch too. Semaca barely appears, and is even briefly replaced by a never-before-mentioned brother, who only gets one scene himself before never being seen again until the end. I was also unclear on what Semaca's motives even were. He wants to destabilize the government because...umm?

Prior to watching these two films, I read a review on IMDb that mentioned how they're basically one movie cut in half. I'd say not really, sort-of. Ultimul Cartuş does feel like a separate story to me, continuing where the last one left off, rather than seeming like someone took a hatchet to one single product. This is appreciated, as I would've been fuming if Cu Mâinile Curate had reached the second act, then just abruptly stopped. One criticism I do have though is that perhaps more focus could've been given to Patulea as the lead villain in that first entry, with the big bad above him Semaca waiting in the wings for the sequel, where he'd take centre stage. 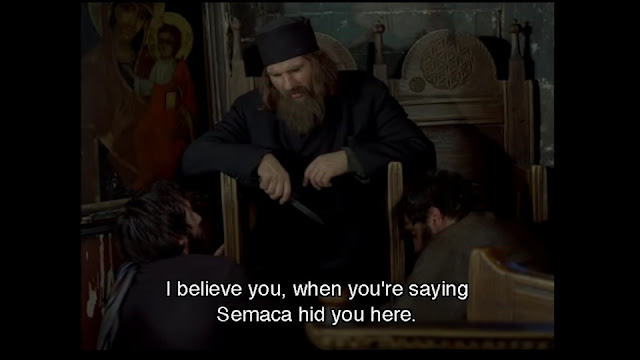 I was unsatisfied with the ending. Under different circumstances, it could've really worked, but the way things play out, it felt antithetical to Roman's character, especially in a situation where doing things his way got him everything he wanted with a nice little bow to boot.

Between the botched attempts on his life, the silly disguises, chase scenes, and the 70s score, this at times feels like a Pink Panther movie! A bad one, though. A post-Peter Sellers Pink Panther movie, though that might be too harsh on Ultimul Cartuş. There is one intentionally funny moment that did make me laugh, when Ilie is racing after the criminals, and asks Roman if he can shoot the tires out, to which he responds with "You think we're in the movies?". Another funny little out-of-universe note is that both cars in this chase are identical.

If you know enough about the subtleties of the Romanian condition in the 1970s, and if you squint, Cu Mâinile Curate could be seen as somewhat critical of the Communist regime, and at first it seems like Ultimul Cartuş was more of the same, thanks to a pretty brutal protest scene early on. I kinda take umbrage though with the reveal that it was really criminals posing as the police behind it, seeing as how violently crushing protests was one of the staples of the Communist regime(s) in Eastern Europe.

The direction by Nicolaescu is once again good, even though the movie isn't, and there are still some very well framed shots! The action sequences are ok, but a bit unengaging. Part of this is down to the lack of music (thrilling or otherwise), and to the lacklustre script. What particularly bugged me is that we open with a recap of last movie's climax (with some neat credit freeze frames), and this is immediately followed by another big gunfight, that lasts over 5 minutes! It at least looks really cool in places. 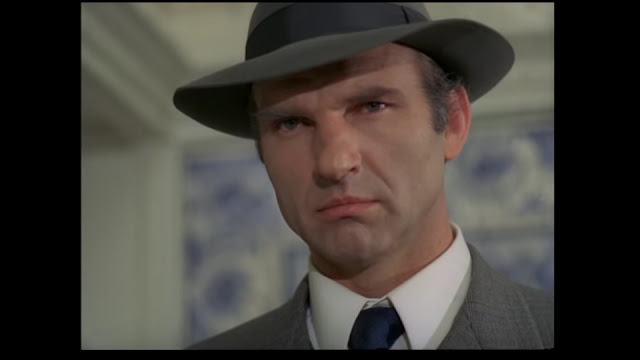 The acting's ok, but no performances really impressed me, and Ilarion Ciobanu isn't that compelling, as I mentioned before. There's some quite bad acting in a pretty hilarious interrogation scene. Let's just say that I don't quite believe Roman was actually banging those crims' heads together.

While Cu Mâinile Curate didn't give an exact date, you can infer it must take place in the late 1940s or early 50s. Ultimul Cartuş gives a more specific date of December 1945, which is less than believable, looking at how fine everything looks. If this was set only mere months after the end of World War 2, I imagine things would be looking a lot more run-down and dilapidated. Also, something tells me disco g-strings prrrobably weren't a thing over there in 1945, but who knows what wonders Romania holds.

I'm willing to bet the composer from Cu Mâinile Curate didn't return for this, because the amount of reused music is frustrating. Some of the tracks resused in moderation work well enough, like the ending theme, but others are just repeated again and again!

Overall, Ultimul Cartuş isn't really worth a watch, and if you wanna check out some Romanian crime cinema, there are other better places you could look... 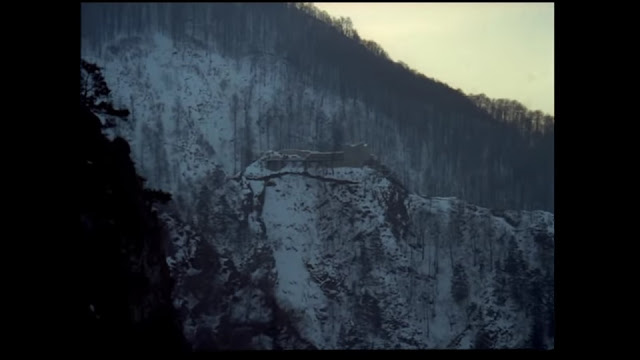 Before I go, there's a confusing matter of chronology to discuss. The Commissioner Roman movies continued as the 70s went on, but a disagreement saw the series splinter into two different directions. Due to audience demand and perhaps his own affinity for the character, Nicolaescu wanted to resurrect the character of Miclovan, but the writer of the Roman films, Titus Popovici, preferred that he stay dead. This led to a dissatisfied Nicolaescu leaving the series and starting his own, starring himself in a role that's Miclovan in all but name, now christened Moldovan.

There are still three more entries left in the Commissioner Roman series, and four more in the Moldovan set, but I'll look at them at a later date. For now I just wanted to review the first two as an introduction, before the divergence happens. It was definitely interesting checking them out, and I look forward to seeing what else classic Romanian cinema has to offer...
Posted by Chris Hewson at 6:55 AM