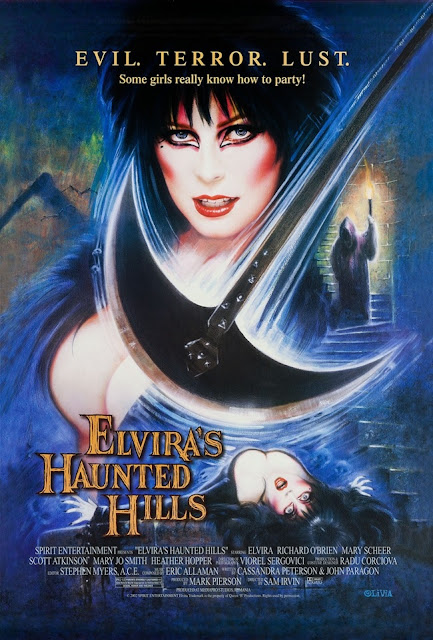 After an all-too-long gap of 13 years, Cassandra Peterson finally returned to the big screen with her 2001 effort Elvira's Haunted Hills

Burleque performer Elvira and her maid Zou Zou are travelling to gay Paris by way of the Cartpathian mountains in Romania, and are waylaid from their journey when the would-be charmer Doctor Bradley takes them to Castle Hellsubus, a spooky place with an even spookier history. The cursed family who dwell within the walls are resigned to letting their tainted lineage die with them, but Elvira's uncanny resemblance to Lord Vladimere's late wife Elura sends him into a frenzy... 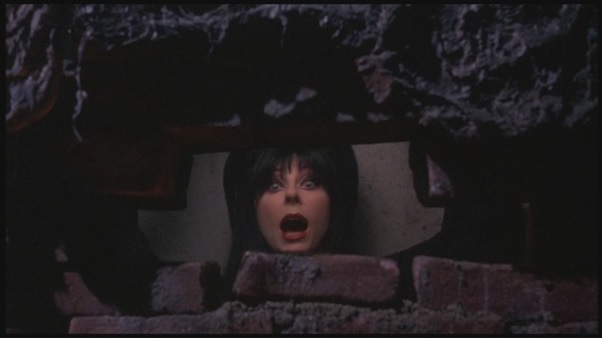 Based on what I'd read from trusted sources, I wasn't really looking forward to watching Elvira's Haunted Hills, and I skipped it for a few years. Then, after ages of not thinking about it, I remembered the movie and felt kinda bad for avoiding it for so long, so I immediately sought it out, and got a copy!...As it turns out, my previous assumption was entirely correct. That's not to say the movie is bad by any means, but it's not all that great, and come the end, I thought to myself "Yeah, I don't really mind that it took me so long to get to this".

Elvira's Haunted Hills is a parody/homage of the Roger Corman Poe cycle of films, and it takes pretty much all of its inspiration from The Fall of the House of Usher, and Tomb of Ligeia, with only brief splashes of stuff like The Raven or Pit and the Pendulum influencing often minor aesthetic choices (like the opening credits, for example). My problem with the portrayal of these is that it feels quite superficial. Haunted Hills doesn't really do anything new with the material, just telling it how the old movies did, but with more jokes here and there. I kinda wish they would've used these concepts as a springboard to be more imaginative and unique. I also feel that adapting House of Usher in anything that's not a short film isn't the best of ideas, as it's not a long story by any means, and dragging it out over 90 minutes can be a recipe for boredom. 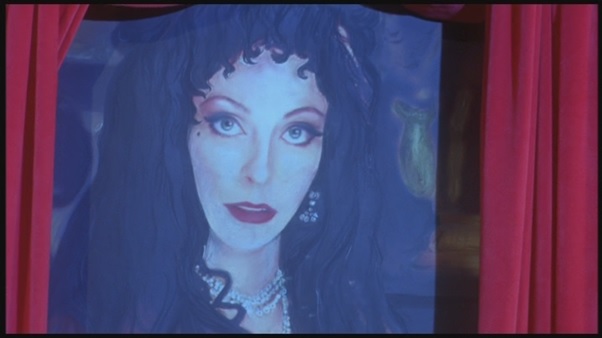 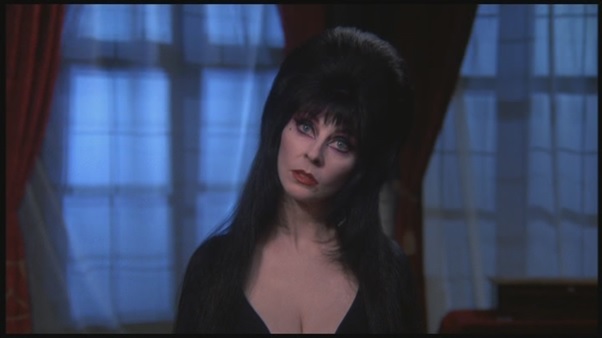 Because there's not a whole lot of story on the film's bones, the pacing is a little slow at times. The climax is a bit hurried, and not perfect, but it still has its positives. Pretty much everything comes together how you'd expect (despite a couple of depressing turns), and there's a neat pendulum slicing too! Other parts ended up feeling superfluous though, and didn't really culminate in a satisfactory way.

Another problem I had is the amount of time that goes by between appearances of certain characters.   It takes nearly a third of the movie before the hunky stablehand Adrian shows up, then he disappears for a while, and similar for Vladimere, who only gets two very tiny scenes before we properly see him, in the cemetery scene.

The humour in Elvira's Haunted Hills is quite mixed. It has its moments, and some parts really made me laugh (my favourite being the musical number), but plenty of jokes either don't really hit the mark, or are just a bit mediocre. The film is by no means unfunny, but it's not hilarious, either. It really is best to not go into this movie expecting it to be on par with Mistress of the Dark, as it simply doesn't even compare. 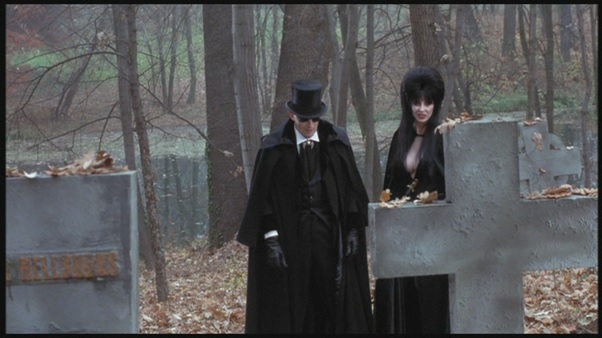 Cassandra Peterson is absolutely wonderful as Elvira, as usual, and age hasn't slowed her down one bit, nor dulled her beauty. The rest of the acting is all fine. Richard O'Brien is mostly pretty good. He plays the role of a tormented yet secretly demented aristocrat well, but one scene in particular was a little too over the top. Thankfully he doesn't act like that the whole time. Scott Adkinson is fun as Dr. Bradley, and while at first I didn't much care for his sudden character switch late in the game, Adkinson excels in both parts to his role. Gabriel Andronache looks perfect as a Fabio-type romantic hunk, and the phoney dubbing is quite possibly the funniest joke in the whole movie! The rest of the cast, from Mary Jo Smith to Mary Scheer and more, are all fine. 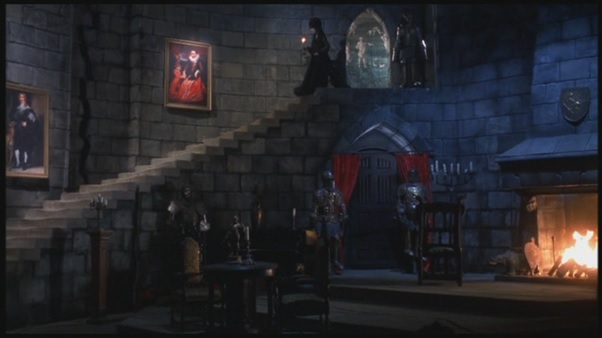 The cinematography and direction in Elvira's Haunted Hills look fantastic, as do the sets and locations! It's filmed all on location in Romania, which can sometimes look unconvincing if a movie is trying to act as though it's set in the U.S. of A., but in this case is extremely fortuitous, as this is a classic horror throwback that's actually set in Eastern Europe. The mountainous green scenery, and castle fit perfectly with what the film is trying to accomplish!

The music here is ok. The main theme wasn't that great (and is repeated a bit), but other tunes are nicer. One moment that got a laugh from me was when a sample of The Vampire Lovers is used!

A couple of random things to point out. In some points, Richard O'Brien kinda resembles William Morgan Sheppard from Elvira, Mistress of the Dark! And there's another amusing moment during the hypnosis scene, where Bradley says "Trust me, I'm a doctor.". First, his delivery is hilarious, and secondly, I wonder if that was an intentional in-joke to O'Brien in Shock Treatment as well as just a funny line. 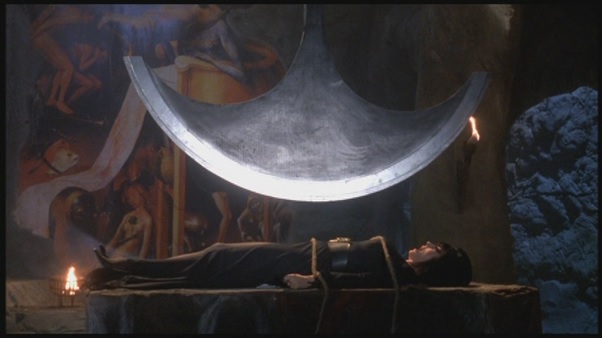 Elvira's Haunted Hills is the very definition of a mixed bag. It has aspects to it that are good, while others aren't so much, but in the end, it's still worth watching, and I certainly respect the hell out of the movie, regardless of how I felt about it! And let's put it this way, this film is nowhere near as bad as some of the movies Elvira's spotlighted on Movie Macabre!...
Posted by Chris Hewson at 7:39 PM