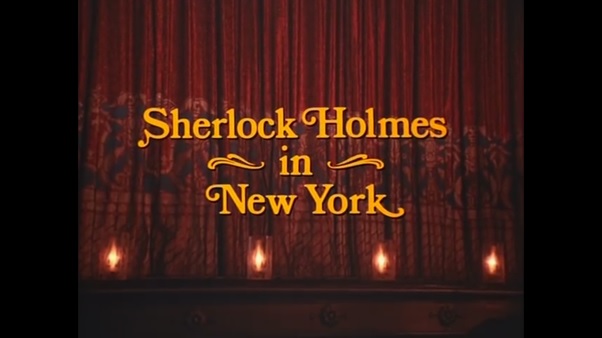 ...Roger Moore played Sherlock Holmes?! Now this I have to see! He certainly had a fulfilling career if he was able to/had the chance to play at least three of Britain's most iconic characters!

In his homely den in Londontown, the great Sherlock Holmes receives a yearly treat-Play tickets from America, sent by Irene Adler, The Woman. This year, however, they've been torn up, alerting Holmes to possible danger. Accompanied by the ever faithful Dr. Watson, he heads to America, and finds that Irene's young son has been kidnapped by the evil Professor Moriarty, who had promised Holmes only a few days prior that he was going to pull of the crime of the century, and all centuries to come, and there'd be nothing Holmes could do to stop it... Sherlock Holmes in New York is a decent enough movie. Not without issues, but you could do a lot worse. It's at least not three goshdamn hours, that's for one!

I liked how the kidnapping is solved, with the deductions it feels suitably Holmesian.   I do wish it would've been resolved just a tad sooner though, so Holmes doesn't start his investigation proper into the gold theft after the hour mark. As for the theft itself, how it's accomplished stretches credulity a bit, but it's pretty clever, and the foreshadowing isn't bad.

There are some incredibly stupid aspects to the plot, such as Moriarty's plan hinging on the rulers of nations everywhere letting him becoming ruler of the world because he has all their gold. 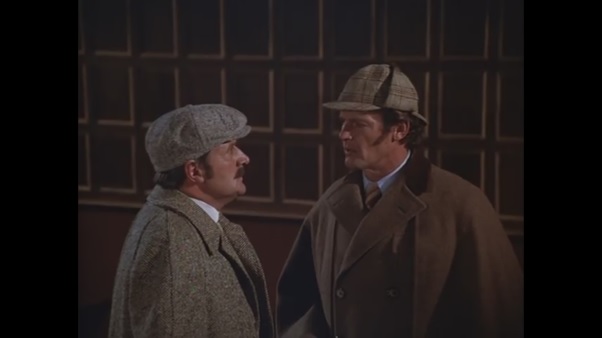 The ending I found to be disappointing. The callback to the start is nice, but the final confrontation is pretty lame, and the whole scene ends up being infuriatingly pointless, as Moriarty escapes again, meaning nothing was accomplished, and he could easily kidnap/kill Scott once again. Also annoying is that once again we have a movie about characters trying to stop a world war pre-WW1. I hate stories like this, because unless they're in an alternate universe where, say, World War 1 didn't happen, they feel incredibly pointless, as the characters go all this trouble to prevent a catastrophic global war only for it to happen anyway a few years later. Thankfully, if nothing else, the movie DOES know how heavy gold is! 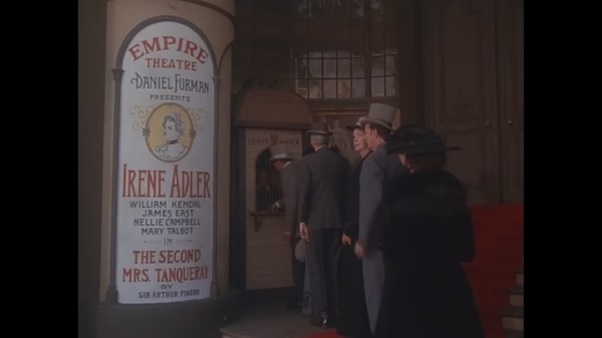 The movie's portrayal of Holmes is kind of an emotional one. He's rarely calm and collected, and too quick to speak or act. There's a scene early on when the theatre director tells him Irene's address, adding at the end a "but..."-"No buts. Come on, Watson!", and Holmes just bolts out. What if the 'but...' had been "XX is her address, but it was demolished, and she now resides in YY". It pays to listen, Sherlock! There are also annoying instances of Holmes continuously interrupting people with his questions while they're already in the middle of answering them.

On top of all that, he's an impatient idiot in moments like when a criminal is coming to give instructions to Irene, and he yells at them to stop while at the top of a staircase, giving them ample time to escape. And there's his idiocy when he locates Moriarty's hideout. He's so loud and spends so much time haranguing the random henchmen leaving the hideout that it draws the attention of the professor inside, giving him ample time to escape, and re-kidnap Irene's son.

Lastly, there's a random and bizarre reveal that his real name is actually William Sherlock Scott Holmes. Huh? What's the point of drastically altering continuity, and for something so mundane, too? It kinda comes into play regarding Irene's son, but it doesn't really warrant that.

This movie will no doubt infuriate Irene Adler fans, as it treats her pretty poorly. Her only role in this film is to be vulnerable, constantly pleading, fainting, and crying. Once her son is rescued, she has even less to do. Roger Moore is a weird choice for Sherlock Holmes, and while the writing lets him down, he actually fits quite well in the role! At a few points he dons disguises. The first is pretty rubbish, but the following ones are actually somewhat effective, if not exactly subtle.

Patrick Macnee is your typical Nigel Bruce type Watson, a living embodiment of 'I say!'. It's definitely amusing seeing John Steed of The Avengers in a more buffoonish sidekick related role. On that note, as much as people give Bruce's portrayal crap for being a 'bumbling idiot', he was always a worthy companion to Holmes, and smart in his own right (those movies never forgetting he's a doctor). The one here though is a bit dimmer, like not understanding the concept of time zones. He gets his moments to shine though, at least.

John Huston is bizarrely awful! It's quite shocking. Maybe he was completely hammered during the shoot. Charlotte Rampling is good as Irene Adler, though kinda wasted. Both the character, and Rampling deserve better. A lot of the supporting/minor cast either attempt not-so-good American accents, or they don't even try. It's great seeing David Huddleston here, and he's decently exuberant. Gig Young is also present, sporting a goatee so menacing that I was instantly convinced his character was to evil, though not so. Finally, there's a brief appearance by Jackie Coogan! I didn't recognize him at first but knew the voice. 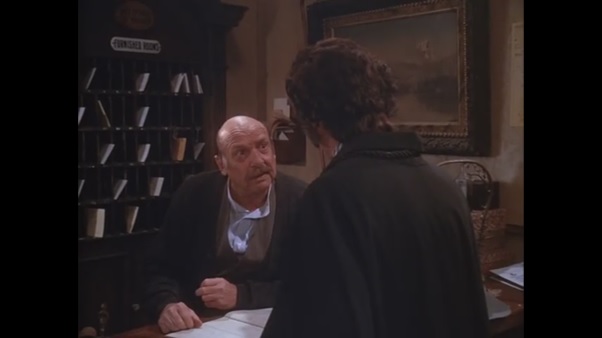 While I'm not exactly clamouring for more Holmes stories set in the U.S., the location here makes enough sense, and isn't too bad. The film recreates turn of the century New York quite well, and it doesn't look too set-bound either, which is a great plus for a TV production.

Sherlock Holmes in New York is by no means a bad film, but as a Holmes vehicle it doesn't impress much. Still though, it's worth a watch if you're a Holmes fan, and if you want to see Roger Moore in the noteworthy role...
Posted by Chris Hewson at 11:48 PM