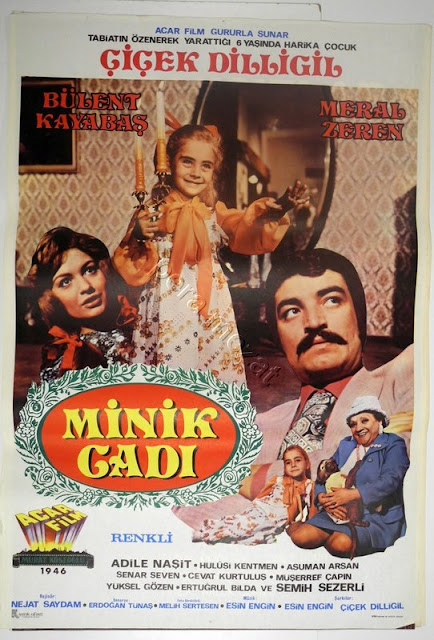 Having watched and reviewed all 10 seasons of Bewitched, I can consider myself juuust a little familiar with the show (Yes, I am aware I have not in fact reviewed Bewitched yet, but it's my blog, so I'm allowed to break the laws of the space-time continuum if I want). I naturally assumed it saw popularity in other countries, but shame on me for not realising sooner that those ever-industrious Turks remade that too!... 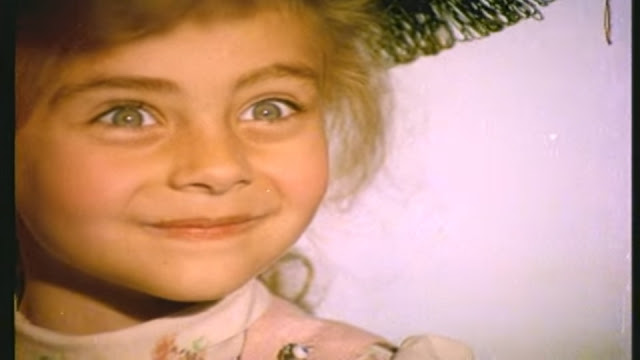 Murat is a businessman and doting father, liked by many, but also loathed by others who wish to see him thrown from his company.  when his son is seemingly killed in a traffic accident. Despondent, he tries committing suicide, but is saved by a mysterious little girl. The quirky Çiçek insists on coming home with him, and makes things happier for him and his kind but beleaguered maid, while making life difficult for his spiteful family, eventually uncovering the truth about his son's disappearance...

Minik Cadı is like if Bewitched tripped some acid and slipped into another dimension. It's got enough qualities of the tv show to be recognizable (a nose-twitching witch (well, lower jaw in this case), her somewhat meddling relation, as well as your typical 1960s sitcom tropes like the nosy neighbours always seeing the magical hijinx but never being believed, etc), but also plenty of differences too. This feels like a genuinely original take on the Bewitched story, and is enjoyable from start to finish. Its biggest drawback is that it comes to a natural conclusion an hour in, and there's still 20 minutes left. At least what we get following that is still entertaining, and I was never clawing for the remote going 'When will this end?!'. You know, it just came to me what this feels like. It's as if you watched a two-parter of Bewitched, followed by the next episode, so you'll get just about an hour of one story, then an extra 20 minutes of other stuff. 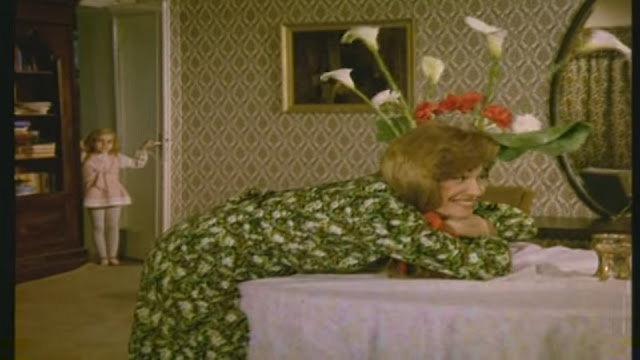 The weirder qualities to Minik Cadı are for sure its shockingly adult themes. From apparent child loss, to attempted suicide, attempted rape, kidnapping, and sexuality, and nudity, it has quite the laundry list of things ensuring no Western parent would let their kid anywhere near this film! As for what I think, it's suitable I suppose. It might be pretty heavy subject matter but it's not like you're watching The Girl with the Dragon Tattoo. This is still a children's film after all.

Samantha in this version is a cosmic prankster who you do NOT wanna mess with! An endearing (if terrifying) presence, Çiçek is way more proactive than her American counterpart! Quick to punish those who commit a wrongdoing, but kind and rewarding of those who deserve it, in such a way that you wouldn't expect from a kid. She comes across as wise beyond her years. 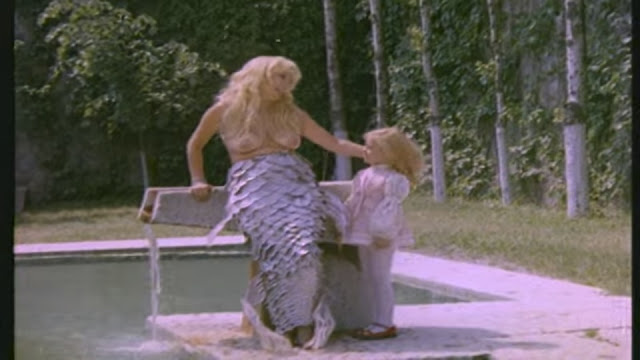 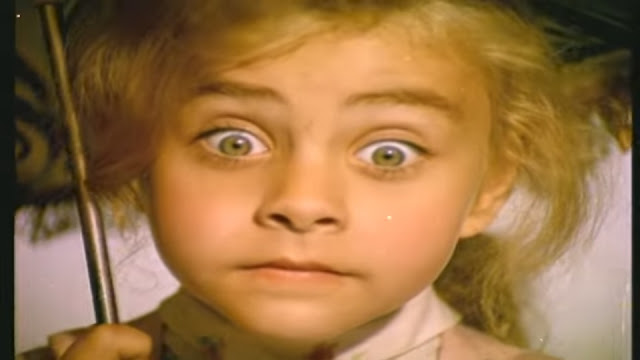 Poor Murat and Ayşel meanwhile are stuck with a family borne from the seventh circle of hell. Cheering when they think Murat's son has died (caring so little about their decorum that they're pretending to openly weep, then switch to raucous laughter as soon as the couple exit the room, not switching back when they come back in!). Thankfully these scoundrels quickly get their just desserts, so the movie's not a horribly frustrating watch. It's quite rewarding, actually! There is, however, one thing stopping one from totally enjoying the movie depending on how good their perception is, and that's the status of Murat's son. He's ok, just being held captive by thugs (on second thought that's not really 'ok', but you know what I mean!), but unless you're fluent in Turkish and notice other little half-details, you may well think he's actually dead!

The romance here is pretty good, even if Murat is a bit of a dope for taking almost an hour plus a skimpy costume change to Ayşel courtesy of Çiçek to realise that his maid is hot and fancies him, and he should really pursue her affections before it's too late. The two actors have a decent amount of chemistry together. 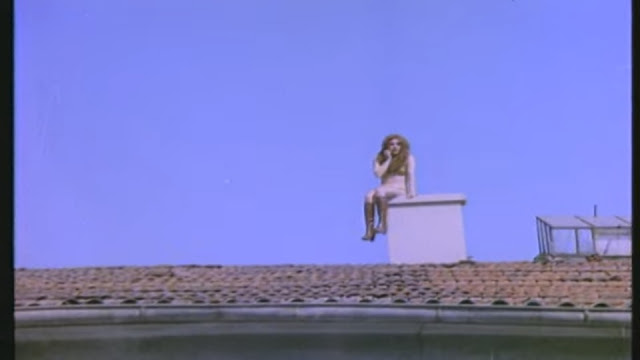 The acting in Minik Cadı is reportedly marked by weird accents, as pointed out to me by a Turkish pal who I showed a few scenes to, but seems good, albeit sometimes over-the-top. The highlight is by far Çiçek Dilligil, who exudes a devious charm, a brilliantly sarcastic expression, and a level of cuteness unparalleled in Turkish cinema. Her acting really impressed me, because the expressions that she's able to convey isn't the kind of behaviour I imagine you can coach a kid, at least not easily. They have to either actually be like that, or be familiar enough with the behaviour to imitate it. Massive props to Dilligil for doing so well! 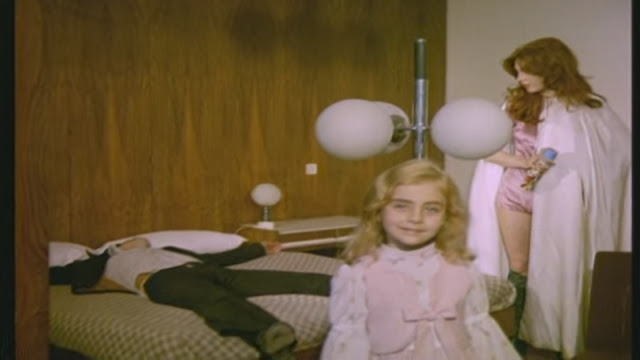 Bülent Kayabaş gets a pretty surprising role! Given he has nearly 200 credits, I suppose it's not odd for him to be in a more serious part, but I've only seen Kayabaş in more manic and comedic ones, so for him to be a grieving father and genuine romantic lead was a surprise. He does well, too, showing a bit of versatility as an actor. His moustache though. Ugh, the 70s'... Meral Zeren is good as Ayşel, and gets a few great moments. She's a badass in the climax even before being granted with karate powers by Çiçek.

In the Gladys Kravitz role is Yeşilçam stalwart Hulusi Kentman, known as the ever grumpy yet lovable grandfather figure of Turkish cinema, with some 300 to 500 roles to his name. Adile Naşit is in the Endora role, which is an utterly bizarre yet very fitting combination if you're familiar with both Turkish movies, and with Bewitched. Her character is a lot more helpful than Endora, mainly because there's no sexist Darren to gum up the works, I imagine. 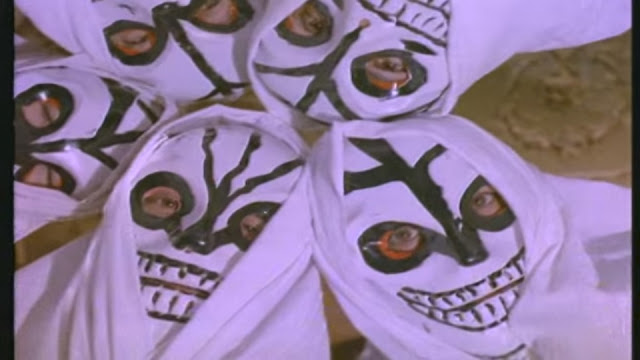 On the effects front, Minik Cadı is pretty on par with Bewitched. Objects move on their own convincingly enough, while the 'vanishing' edits usually aren't too bad, and the animals present are cute. What surprised me most were the scenes at the end when Çiçek is driving. There's no hidden 'real steering wheel' anywhere I could see, nor is there a sign of and stuntpeople, and the vehicle is actually in motion!...Oh god, they actually let the 6 year old child drive the car, didn't they! There was one moment where I noticed an older shot being re-used, where it was clear due to Çiçek wearing different clothes in the close-up than the long shot (this being one of the only scenes where she is wearing something else). Finally, the opening and ending credits are decent animation and very reminiscent of this movie's inspiration. 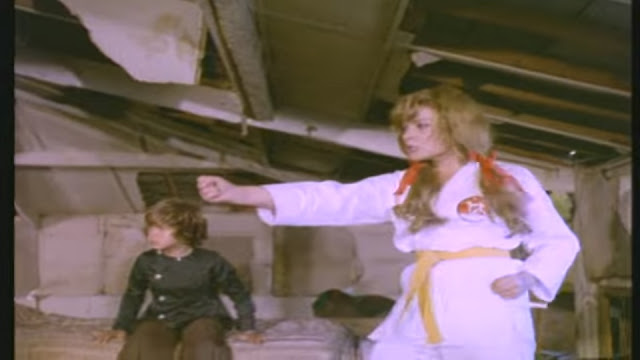 The music here is nice, with a healthy amount of rescorings of the leitmotif. As for the main theme proper, it's a nice enough song, but...errr...Çiçek Dilligil is a lovely actress, but she also cannot sing. Then, as if to answer my doubts about whether she was actually good but let down by misleading poor sound quality, we get a reprise from her, proving to me that she is in fact the problem. The main theme isn't repeated much for a Yeşilçam movie, pleasantly enough! We get the little instrumental tunes here and there, but the theme proper mainly just plays at the beginning, then around the 50 minute mark. Quite a restrained use, you may say! Well unfortunately it's no sooner than that first reprise ends that the second begins! The fact that the first reprise was sung by a different vocalist does not in fact make it less repetitive to hear it twice in a row. We hear a couple of snippets at the end too, but that's fine. 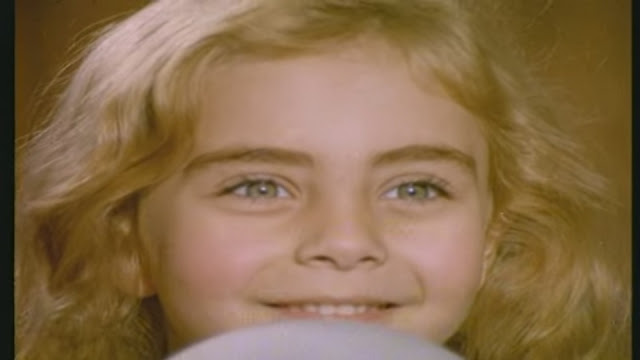 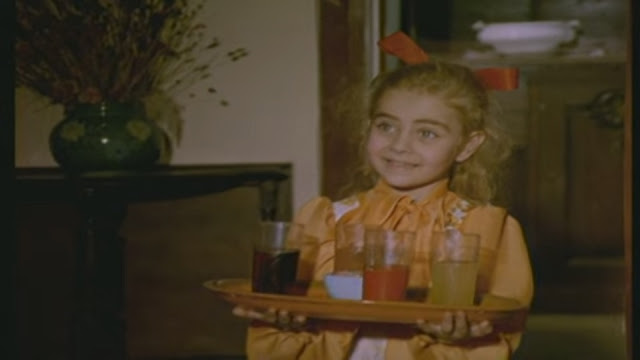 Minik Cadı is a very enjoyable piece of Turkish cinema, and proof that just because a movie from Turkey is weird, doesn't mean it always had to look cheap or badly made. Bewitched couldn't have asked for a better remake!...No, seriously, it couldn't. I mean, what the heck was the official one we got, my god!...
Posted by Chris Hewson at 7:43 AM