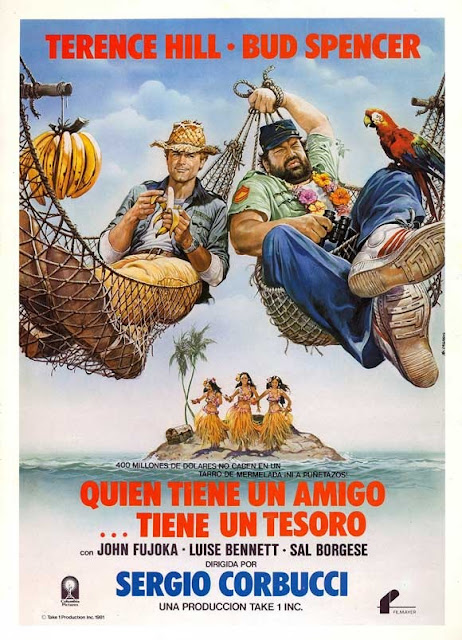 Alan is having trouble with a gang he owes money too. After betting on a shady horse race and losing his one chance to repay them, he goes on the run with his uncle's treasure map, to find the island of Bongo Bongo. He stows away on the boat of Charlie, a grumpy sailor under contract with a marmalade company to trek across the world. Soon discovered after his repeated attempts to steal food go awry, Alan is tossed overboard, but Charlie makes the decision to not let him be eaten by sharks, and reluctantly agrees to take him to the nearest island. Taking his new position to his advantage, Alan messes with the ship's compass to direct it straight to Bongo Bongo, causing the two to be separated from the boat in the process. Now stuck together on the island with no apparent way out, the two go exploring, finding a friendly native tribe, a Japanese holdout from World War II who doesn't realise the war is over, and a band of menacing pirates... 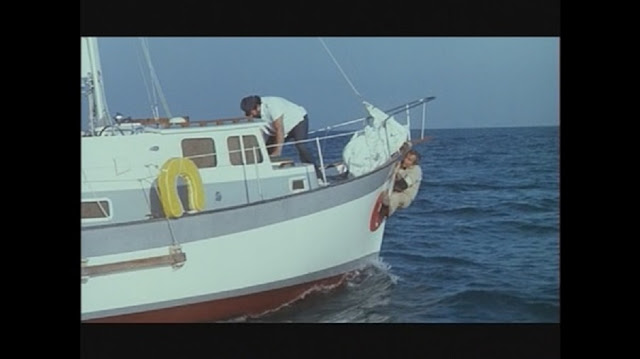 Who Finds a Friend Finds a Treasure is a wonderful movie. Lighthearted, barrels of fun, and has plenty of the typical Hill and Spencer cartoon action. While it takes a decent amount of time to get there, the tropical island setting is a nice change of pace from the often more city-bound adventures the duo would usually find themselves in, and this is a unique treat in their filmography.

The story here is simple, but effective. The setup is good, taking its time and not rushing things. There are a couple hints of cool foreshadowing, too!

There are only a couple of frustrating moments present, such as stowaway Alan's way too overt devouring of Charlie's food (and pinning the blame on the bird at first too!), and the part where Charlie mistakenly thinks Alan's selling him out later on. Ugh, I can't stand misunderstandings! 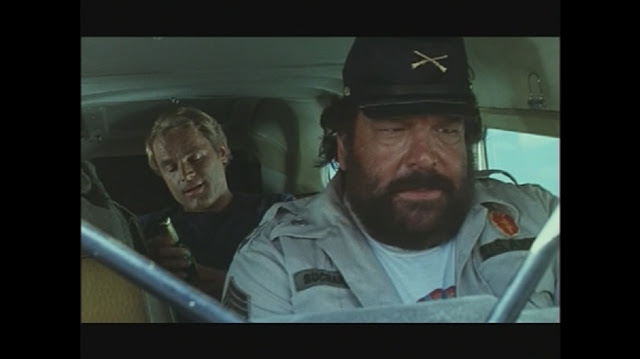 Regarding the native characters, the movie doesn't indulge much in stereotypes or cliches. They're mainly only present in the one character of Anulu, and it's made apparent that his more loopy behaviour is down to him being a dope. An endearing dope of course, and one who doesn't take racism from pirates standing up!

There are actually surprisingly few fights in Who Finds a Friend..., but they're all spaced out well enough and each are delightfully staged spectacles. With the sheer volume of opponents to overcome, cartoon logic, and goofy sound effects, they're a joy to watch, even if some of the punches clearly don't hit their target. 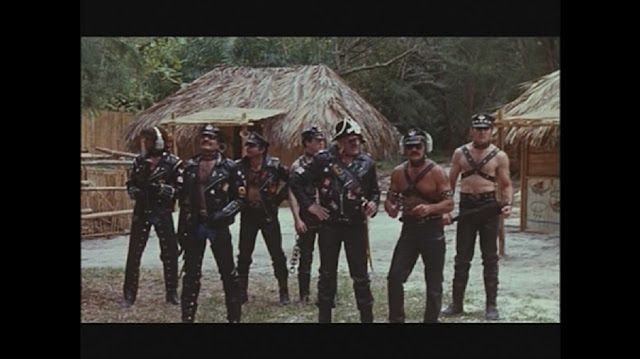 The villains aren't a complex bunch, but that's not necessary in this case. They're a goofy lot, with the pirates looking like they've just stepped out of a leather bar. Kamasuka starts out as a baddie, and his fort makes him a genuinely formidable opponent. He's quite a neat character in how he grows beyond the initial joke behind his appearance

The score to Who Finds a Friend... is definitely the highlight of an already great film! A mix of Caribbean riffs, tranquil island beats, and 80s synthesiser tracks reminiscent of The Buggles' more experimental tracks (I'm not the most up and up of people with techno robot voice music, so that was the best example I could think of). The highlight by far is the main theme, by Oliver Onions (who else!)-Movin' Cruisin'. With its nice singing and groovy calypso beat, it's a tune you'll be dancing to for hours, and'll be stuck in your head for ages, in the good way of course. It's also repeated juuust enough, rather than overused. 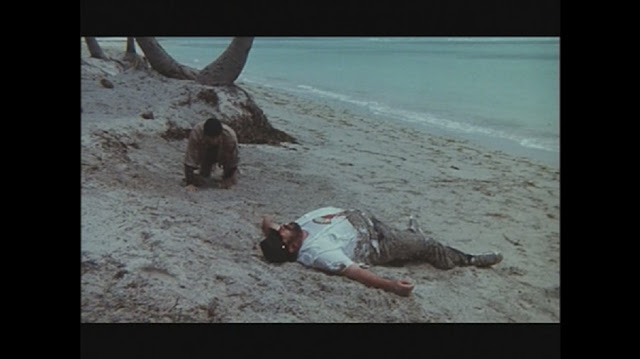 The acting here is plenty of fun. The two leads show off their usual charisma, with Hill being the charming and traditionally handsome one, while Spencer is the bulky and strong silent type. Louise Bennett is nice as the tribal queen, Mama. while Sal Borgese's role is not exactly what you'd call a dignified one, but entertaining regardless. Despite not showing up until nearly an hour in, John Fujioka is a fun and endearing presence as Kamasuka, playing more manic moments well, as with calmer and subdued ones, and he makes it into just about every scene once he appears.

Perhaps the weirdest thing about this entry in the Hill and Spencer canon is that Bud Spencer's dub voice is different! This is only a problem I'm sure for those watching the English version   You get used to it fairly quickly, but it really throws you through a loop at first when you're used to hearing him speak in one voice, then hear him in another. 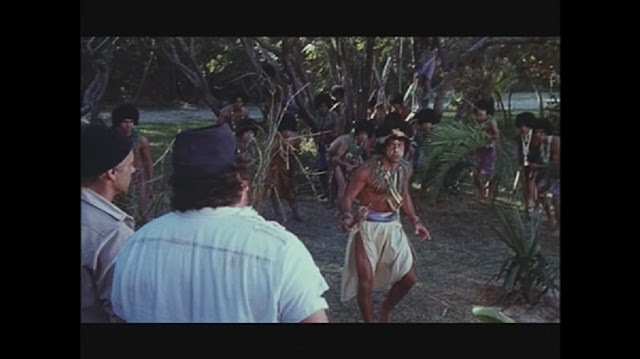 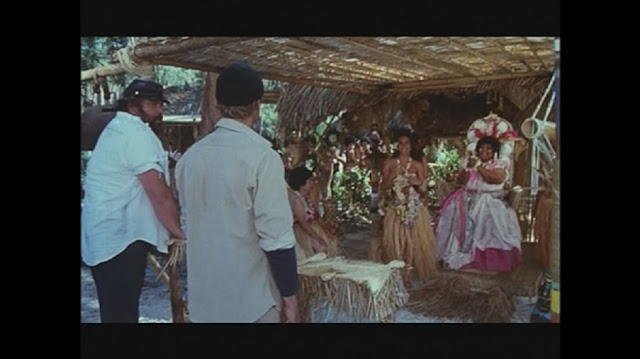 While we're on the subject, let's chat a bit about English localisations of these flicks. Some were dubbed just because they were in Italian, but quite a few were actually a mix of languages. The Hill and Spencer movies are great examples of this, as Terence Hill is not only doing his own dialogue in just about all of 'em bar the earlier westerns, but it's clear that he's speaking English first on set, and he dubbed himself into Italian in post-production. Then there's the presence of English actors like David Huddleston, and little touches like notes and signs we see which are written into English (whether or not they're different in the Italian versions, I'm not sure).

Sergio Corbucci of all people is the director behind this movie, and he does a good job, proving that just because your stock and trade is violent westerns, doesn't mean you can't cut loose with a lighthearted comedy.

Lastly, the mystery location Who Finds a Friend... was filmed at is a truly beautiful spot, and it complements the film so well. It makes one wistful for the quiet life. 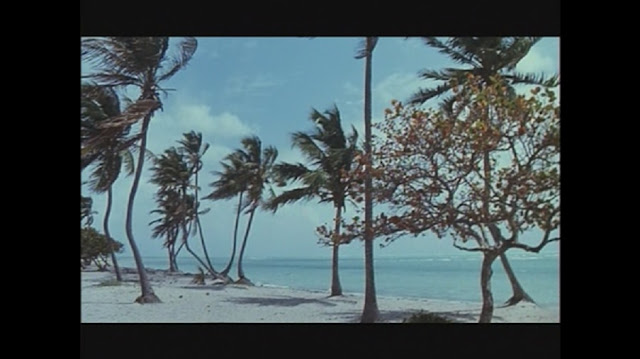 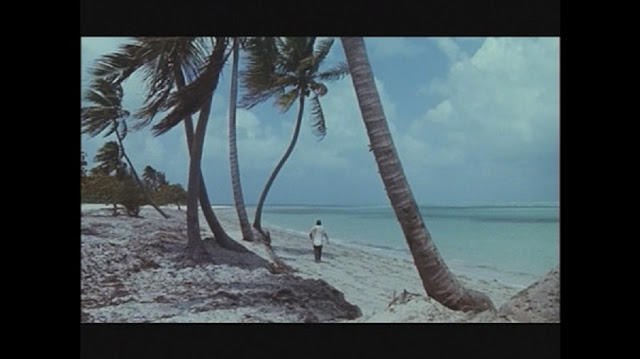 This is a highly enjoyable watch, and whether you're new to the works of this duo, or are familiar, but just haven't gotten around to this gem yet, I wholly recommend it! I'll leave you with two points. Firstly, never say 'There's only two of them' when you're a thug in a Terence Hill-Bud Spencer picture. And secondly, the closing message of Who Finds a Friend Finds a Treasure is definitely one worth taking to heart. "The director and the entire production sincerely thank the people and the authorities of 'The Island' for their courteous and generous collaboration during the shooting of this film, and they solemnly promise never to return nor to reveal to anyone the location of this last unspoiled paradise"...
Posted by Chris Hewson at 8:16 AM