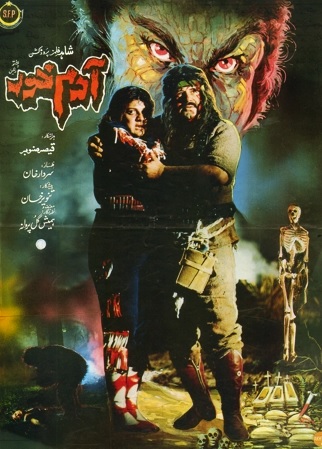 Man eating beasts drinking the blood of the innocent, women who can change their outfits at the drop of a musical number, monkeys on horseback with hand grenades! It's time again to jump into the weird world of Pashtun cinema!

For some time, a fearsome monster has been stalking the countryside of Pakistan. Slaughtering anyone in its path and eating their flesh, it seems unstoppable, but opposing the malevolence is a noble bandit seeking to avenge his lost spouse, and clear his name in her death. Teaming up with another woman seeking revenge, they take the battle to a local crime lord, who may know more about the sinister goings-on than he lets on...

Adam Khor is a typical example of a Pakistani b-movie (or z-movie, depending on your point-of-view), and for what it is, it's decent. The plot is pretty scattered in how its told, but is otherwise quite straightforward. There's a monster on the loose, and the protagonists are trying to get him. What's less normal is the rapidity in which characters are introduced and killed shortly after we meet them. This happens to two seemingly important characters early on, coming as a bit of a surprise. 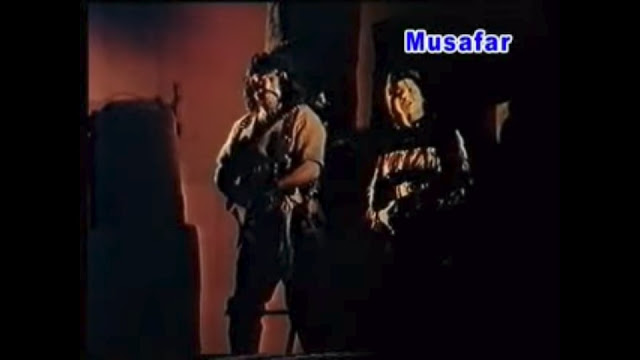 Something I found quite interesting and amusing is how each set of characters perceive the story's events. The cops think there's a human serial killer on the loose, the heroes think they're in a gangland tale, while the villain knows he's the main attraction in a monster movie!

The climax isn't hugely satisfying, but it's serviceable. The final development is absolutely crazy, in a good way. Very nearly in the negative though considering it was coming across like a deus ex machina, but then I realised the hero was only being gifted a weapon, rather than having the villain gift-wrapped for him. One thing to note is that Adam Khor thankfully does have a denoument. Granted, it's only 15 seconds long, but it at least has one! It probably sounds like I'm kidding, and I partially am, but it legitimately is at least a little satisfying, despite being rushed (which a 2-and-a-half hour film has no business being).

Speaking of crazy, this film has that in spades. It's not as bizarrely random like others of its type for the most part, but it does still have its strange moments, such as the aforementioned grenadier monkey, the climax, or the hero's introduction, where he busts out of the Earth like he's a demigod.

Coming to Adam Khor's status as a monster feature, I'd say the film sticks to the 'rule of Jaws' very well, in that it shows just enough of the creature to keep your attention, but not too much so that you lose interest too soon. Its full introduction is something nifty too. It's super cheesy, but entertaining in how thick the movie lays it on with the ooky skeleton props, cobwebs, the sound effects, and other assorted creepy imagery. 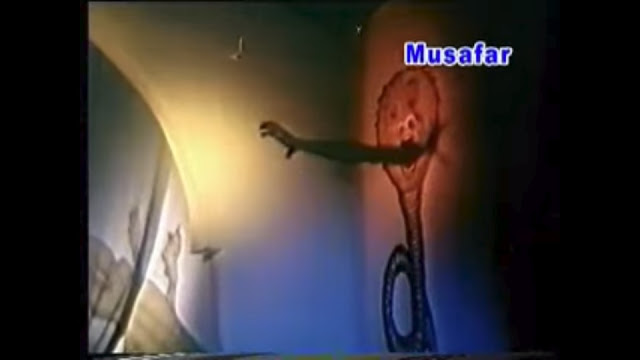 Badar Munir cuts an imposing enough figure as the main hero, but he does an incredibly poor job at protecting the women in his life from horrible deaths. Also, for an innocent man, he gets discovered by slashed-up corpses an inordinate amount of times. It's no wonder the police keep thinking he's guilty of being the cannibal!

The villain is a gang leader and head of a satanic cult, yet the fact that he's also the monster is a surprise even to his henchmen. On that note, his transformations often seem like a Jekyll and Hyde affair, which is...strange. So he's an evil crime lord, but rather than deliberately transform himself into a demonic killing machine, the process happens against his will and his underlings don't know about it? He spends quite a while in the film's midsection being in a more vulnerable state, before abruptly shifting back into a vicious gangster for the last act. 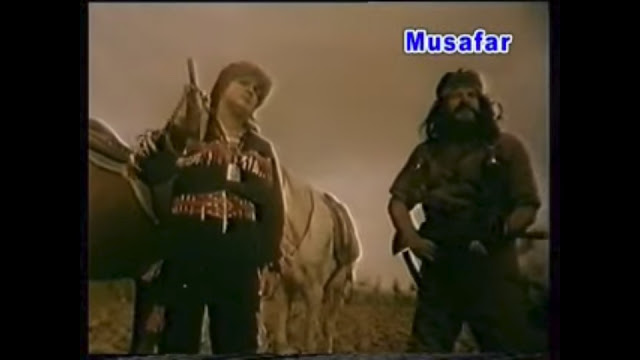 The women in this movie are quite varied. The most notable is Shehnaz, who's a badass partner to Munir, netting her fair share of kills, though she ends up sitting the final battle with the man eater out, since she momentarily forgets how to aim her gun. The other woman we see are either victims, bystanders, or singers. Also of note is that these Pakistani women are curvy and proud of it, strutting their stuff and knowing full well they've got the goods.

Adam Khor is full of familiar faces of Pakistani B-grade cinema, though Badar Munir is as of yet the only one I'm able to confidently name, along with Shehnaz...Khan(?). Those two do competent enough (albeit overacted) jobs, while everyone else ranges from hammy to positively manic, chewing vast amounts of scenery.

The songs here are typical of South Asian cinema. Not great, but tolerable, albeit often very shoehorned in. There's usually no proper segue into them, feeling very rushed as we're flung from a serious (perhaps even sombre) moment straight into a cheery tune. One I dug was when the imprisoned police officer gets his time to sing near the climax, and I also liked the dramatic way his girlfriend joins in at the end. It actually felt like this number had a purpose in the narrative, and endeared these two characters more to me. 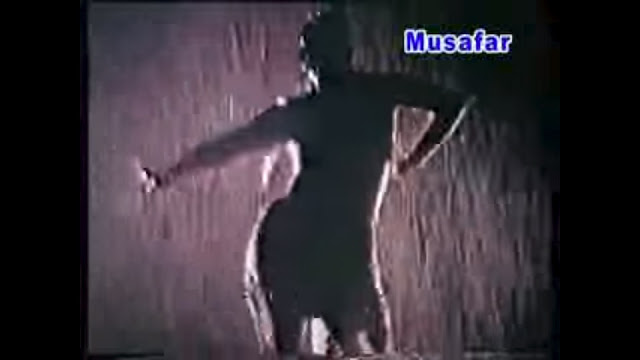 As stated, the songs were enjoyable, though the fact that each of the women singing seem to die after almost every one in the early parts of the film did put a bit of a damper on the fun. Quite a shame given all the effort the characters put into their lavish productions, only to meet a grisly fate. Another running theme is that a lot of the guys being serenaded walk away at the end of the numbers disinterested, having shown little interest in their sweethearts' show.

My favourite song was the number at about the hour-and-a-half mark. It was fun and peppy with nice singing and melodies, neat dancing and choreography, and it was steamy in a borderline homoerotic way, which is a very nice sight for such a movie, not just because it left me going "Niiiiiiiiice", but because it's potentially a progressive sign.

Adam Khor is a very violent film, with lots of fake blood being spilled, flesh being torn off or punched out. A lot of it's pretty unconvincing, but fun, and some looks good. The make-up/costume design for the titular man eater is good, in the sense that it's pretty funny to behold, but effort has at least been put into it, regardless of how silly he looks. Far less inspiring are the dogs/wolves, which look like papier mache and are laughable when eating people. Finally, some of the scenes (namely the musical numbers) are shot in the rain, with it even playing a big part in a few of the musical numbers. While for all I know Pakistani movies may well have been able to simulate rain, that probably would have been beyond their budget and resources. With that in mind it's impressive that they had the tenacity to film in rain, and the patience to wait for it! Especially having timed choreography around it! 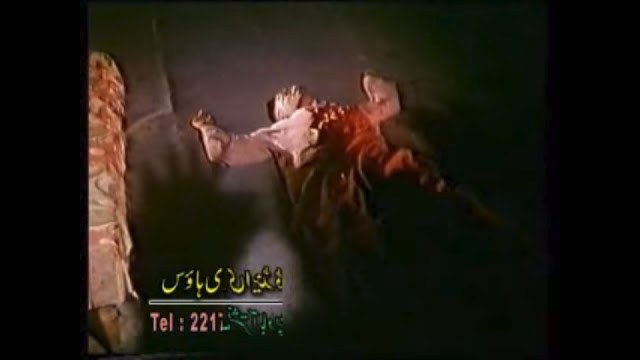 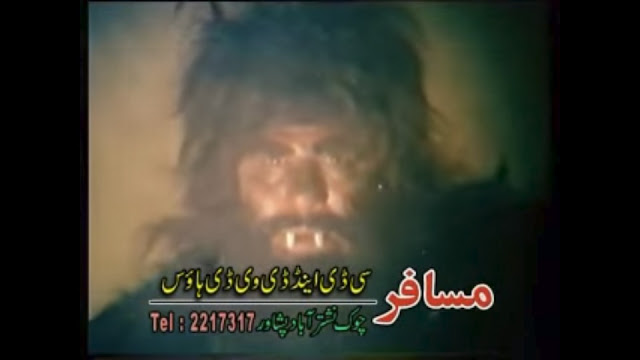 The editing here is pretty crazy. Characters doing jump cut disappearing tricks are not unexpected in the musical numbers, but it's still weird seeing the laws of reality break every time people start singing. Other scenes have multiple quick cuts with flipping frames and gunshot sound effects, feeling somewhat disorienting. Some moments are not only not well lit, but also tinted (often a dark blue), making some parts a bit hard to make out, including the final battle. Finally, there's so much slow motion that it sometimes feels like the characters are legitimately stuck in a time bubble.

Of all the Pashtun movies I've seen so far (which isn't many I'll grant you), Adam Khor is perhaps the best. That's not to say it's good in the traditional sense, but if you're blessed with patience in abundance, it's worth a watch...
Posted by Chris Hewson at 9:10 AM