It's been a long time coming, but finally I've come to discuss my most beloved Doris Day movies! I'm looking forward to this... 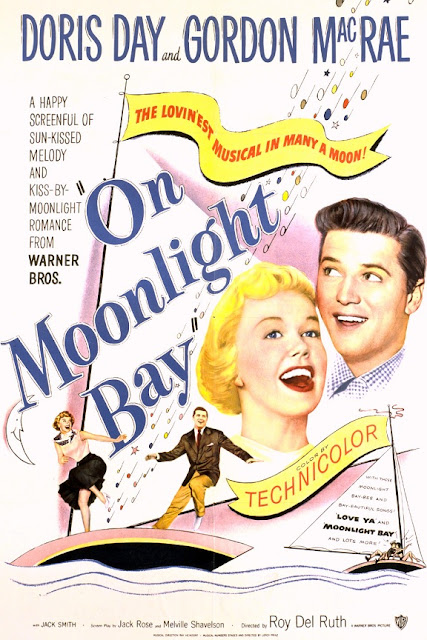 Much to the annoyance of everyone but the patriarch, the Winfield family has moved into a new neighbourhood. While George feels it's a good change, his wife Alice and children Marjorie and Wesley are all angry at having to pack up their whole life on a whim. They gradually get used to their new location, and while Wesley messes about in school, Marjorie meets the idealistic college boy Bill Sherman, and they hit it off. However, Bill makes exactly the wrong impression on her father every single time, and George forbids the two from getting together. Can true love win out, or this romance doomed?...

On Moonlight Bay is a classic musical starring Doris Day and Gordon MacRae, and no, I did not intend for that to rhyme. Those two were just a movie match made in heaven, I guess! 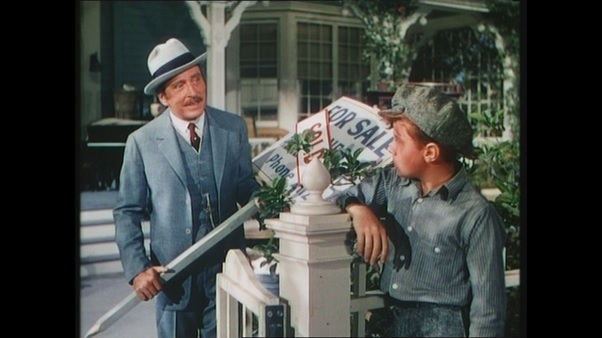 The story has an episodic structure, which I imagine comes from it being based on a series of short stories. As for how accurate to the source material it is, I don't know. I've never read Tarkington's books, but from what I know, I guess that Marjorie's romance didn't play much of a part (if any) in them. Thankfully Wesley's shenanigans (the crux of those tales) don't take a back seat, as that would've really made this an unfaithful adaption.

There are a few problems I have with On Moonlight Bay. The frustrating and cringeworthy moments, the misunderstandings, and the constant on-off nature of Marjorie and Bill's relationship, as well as the amount of times George swears him off, then is ok with him, then hates him again, etc. It's annoying! 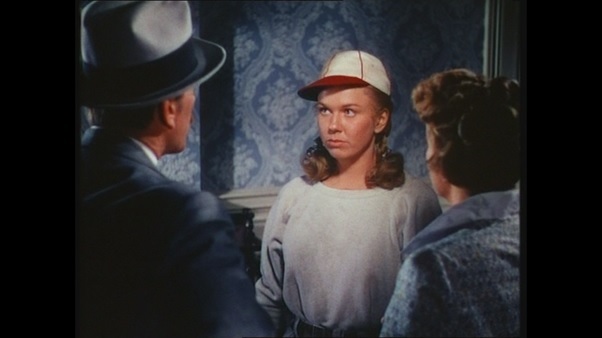 I also dislike how much the movie ditches Marjorie's tomboy demeanor. She starts off as one, wearing boyish clothes, not caring for ladylike niceties, and more interested in sports than marriage. Then she meets Bill and instantly starts acting more ladylike, with her tomboyish habits and personality rarely being mentioned again. It's not so much that the movie is showing her as simply going through a phase before becoming a 'real lady', but more that it totally forgot those were even part of the movie.

One odd thing about the film is how at the start the characters go on and on about how they're in a totally new environment, practically foreigners, and had to leave their old friends behind...But a mile and a half is only a five minutes drive! You could walk that in just over twenty minutes! You city people are assholes!

The characters are all distinctive, and fun to watch. Bill is somewhat annoying here and there, but mostly likeable. The hindrance to the romance is that he and Marjorie have only been dating for a few days! They spend a night together and are already discussing marriage (or the lack thereof rather, due to Bill's beliefs), and before too long he has to leave for college. By the time he comes back they talk like long separated lovers who have been together lo these many years, rather than weeks, at most. 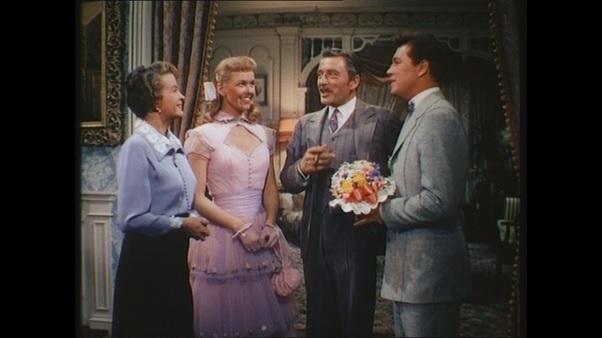 As good a movie as On Moonlight Bay is, it's perhaps not as good a musical as it could be. Some of the numbers are integrated really well, like Love Ya Love Ya Honey, which is turned on its head in a hilariously sarcastic performance. There's also the main rendition of On Moonlight bay, which starts off with Bill saying how stupid the words are, proceeding to quote and mock them before singing them outright. Unfortunately that doesn't lead into a full musical number for reasons I'll never know! More on that later. 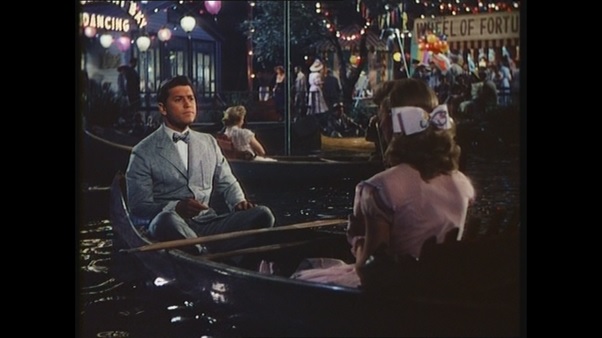 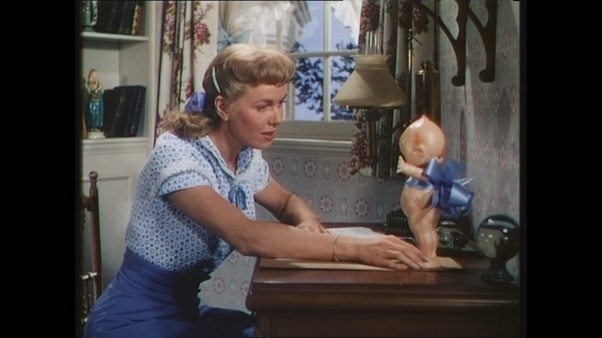 Not readily apparent to those unfamiliar with old music is this movie's showtune nature. This isn't much of a problem, as the tracks mesh well with the surroundings, both in recitals and the general period. What really hampers this film musically is how few numbers there even are, and how many are interrupted partway through, or only get a few lines sung before the movie moves on. The titular song gets it the worst! It plays in the opening credits and over the ending, but the main rendition sung in the film itself consists of about four lines, and that's it!

The pacing in this movie is great, although it perhaps stretches on a bit too long. It seems to reach a natural end point, but continues for another 20 minutes and reaches another ending, when the first sufficed.

The acting here is all very good, from Doris Day and Gordon Macrae, who admirably act half their ages. National treasure Mary Wickes is in top form as the sarcastic and snarky maid Stella, while Leon Ames and Rosemary DeCamp do well as the stuffy and strict George Winfield and the more open-minded and calmer Alice, respectively. 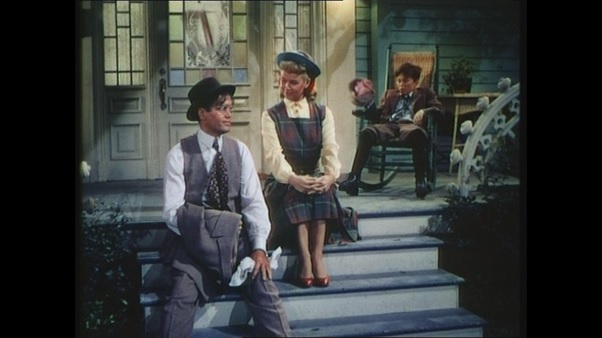 As for the singing, it's fantastic! Doris Day is lovely, while Gordon MacRae's voice is operatic goodness. They're pretty much the only members of the cast who sing, which is a shame, but if we're only to get two, at least let them be two wonderful performers

On Moonlight Bay may not be perfect, but it's still a great musical that utilises its leads perfectly...

By the Light of the Silvery Moon 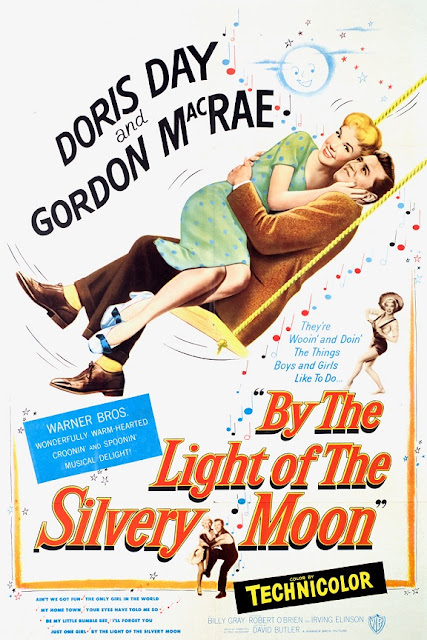 Now that Bill has come back home from the front-line, the war having ended before he saw action, the Winfield family prepares for marriage right away, but it turns out Bill has a new outlook, wanting to postpone the nuptials until he and Marjorie have a nest egg saved up. Pissed at first, Marjorie comes to accept the idea, and soon enough Bill is all ready to get married, but this time its Marjorie's turn to be apprehensive to marriage, since she, Wesley, and Stella discover what they believe to be a letter from the family's patriarch to a lover, really a perfectly innocent note about a play to an actress client of his bank...

By the Light of the Silvery Moon is a great example of a sequel done right. Not feeling unnecessary or too contrived, it's just as good as the first, and even better in a couple of respects. 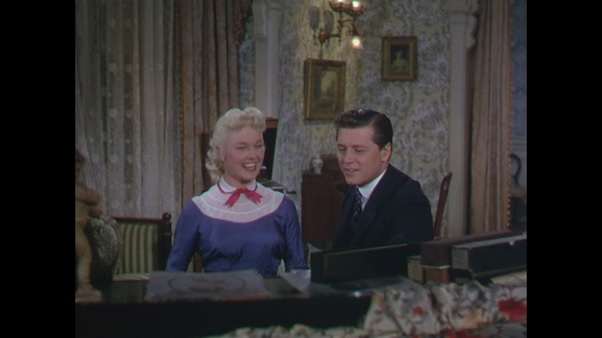 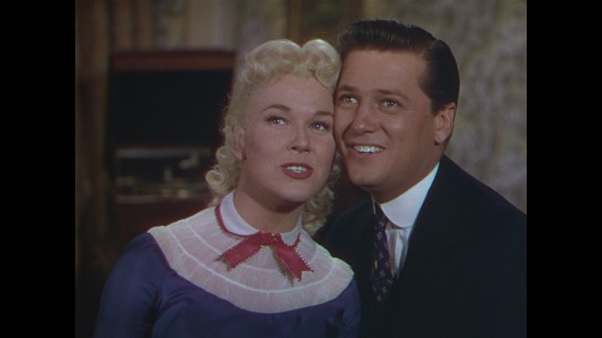 The plot here is just as episodic than the previous film, And since the romance has already blossomed between Marjorie and Bill last movie, the story has more time to focus on other stuff the whole way through. There's less swearing off in this entry (or perhaps the same amount, but simply better paced), though still some awkwardness. Nothing unwatchable though of course.

One thing that annoyed me all the way through isn't really the movie's fault, but society of the time, expecting the main two to be married at only 18! Why don't you give it at least a few months before you get hitched! Actually date each-other! Old fashioned fuddy duddy's... 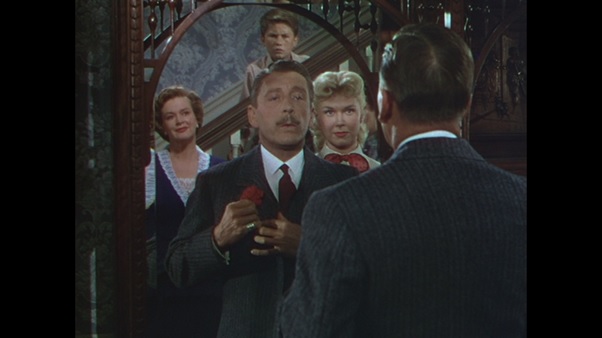 Marjorie being a tomboy is present early on, and is not quite but almost forgotten as the film rocks on. It's nice seeing her buck societal sexism and get herself a job, even if her choice of career is a bit weird. It's not that I can't believe she can sing, but rather you just get used to seeing everyone in these movies being able to sing during the musical numbers, you don't really think if they can actually sing in their everyday life...I probably could've worded that better, and I hope you all know what I mean!

Bill is a big wet blanket in this movie, putting a damper on everyone's good time. He's also a high and mighty falutin' guy with 'high-minded', 'free-thinking', and 'radicalist' ideas and ideals, but the instant Marjorie wants to get a job to help support the two of them, Bill's all "Business is a man's world, and women have no right forsaking their sacred heritage to meddle in it. Now they're even meddling in politics!" Ughhhhhhh! This makes him very unlikeable, but at least the movie knows it, and treats that attitude is such. It's also annoying how he makes the decision to postpone the marriage without consulting Marjorie, yet when she does the same later on, he's thoroughly against the idea. Outside of these scenes though he's just the same as before. 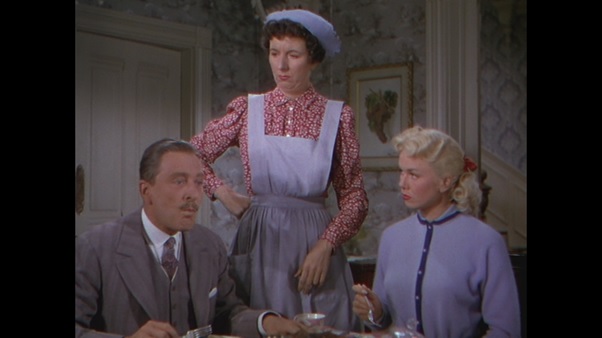 Wesley is once again a fun addition with his detective subplot, even if it does lead to much awkwardness, as you'd expect. But of the best kind!

Hubert Wakefield stand-in Chester Finley is a genuinely loathsome character. Refusing to take a hint, expecting dates from the woman who's engaged just because her fiance is overseas, as well assuming she'll reciprocate, despite being engaged. And the second Chester finds out Marjorie and Bill aren't having their wedding immediately, he again jumps at trying to ask her out. TAKE NO FOR A BLOODY ANSWER, CHESTER! However, I did really like a later scene, where it's Bill's turn to be unreasonable and hostile, wanting to fight Chester, and this regular nerdy looking professor proceeds to lay him out! 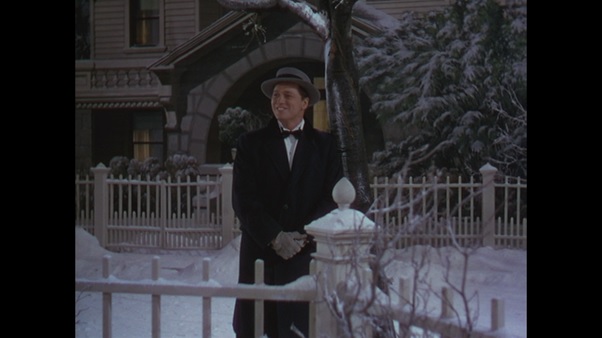 The remaining cast are all fine. Miss LaRue is nice, contrary to what the majority of Winfields and co. think of her. Peewee could be a bit annoying to some, but in the mostly forgiveable precocious child way. He's cute and fun.

Silvery Moon is a really good musical! While it has more or less the same amount of songs as On Moonlight Bay, they're much better paced from each-other, and they all get played all the way through this time! There are a few numbers where the music is kept quite low, and the actors    showing a great confidence in the singers on the movie's part.  I'm tempted to rattle of what songs were my favourites, but alas there are too many to choose. The only one I'm not so sure about is King Chanticleer. I don't dislike the song, but I'm just not sure if it fit properly in the movie, given it's a random number Marjorie is performing for her job rather than one that's related to the plot and characters. 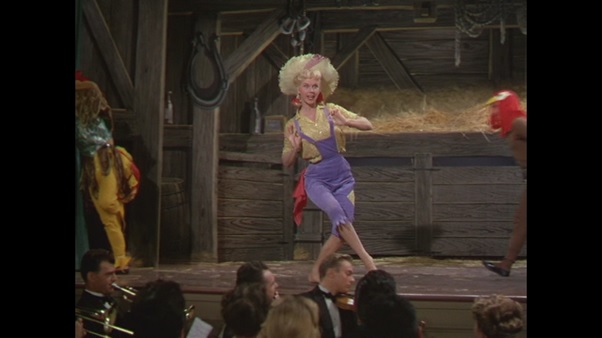 To describe the acting would be merely repeating myself from the previous section of the post, so sufficed to say, it's all good, as it was in On Moonlight Bay!

By the Light of the Silvery Moon is a really fun movie, and a really good sequel. It's a fitting end to the series, though it is a shame we never actually got to see Marjorie and Bill's wedding. We could've gotten a third movie to round out the series, with that as the focus! Ah well, perhaps it's for the best. If their wedding had gotten a movie devoted to it there'd probably be more of the typical drama and break-ups. If there's one thing we can expect from the Winfields, it's that!... 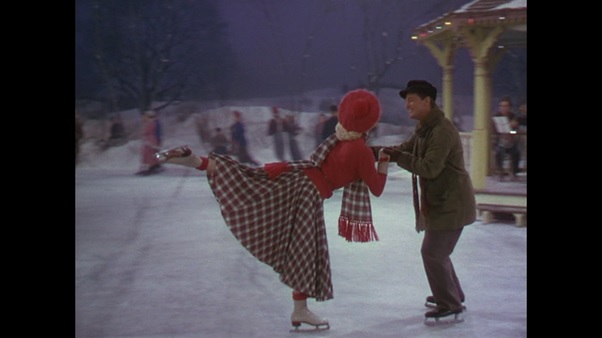 Thanks to their charming period setting, as well as the songs and storytelling, On Moonlight Bay and By the Light of the Silvery Moon remain my favourite Doris Day films of all! Certain parts of them might make me wanna hide my face between my hands, or outright piss me off, but overall they're wonderful viewing experiences...
Posted by Chris Hewson at 9:00 PM