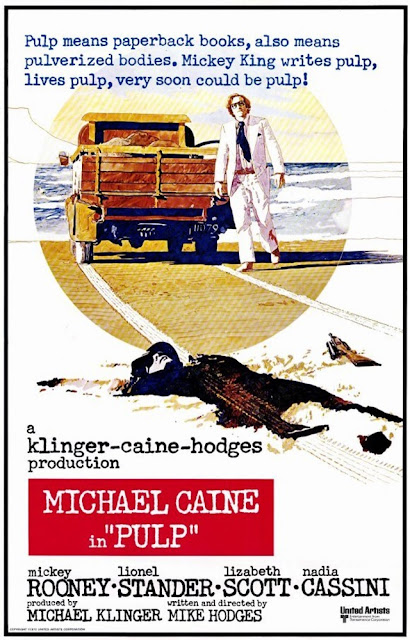 Sleazy fiction writer/author Mickey King is hired by a reclusive figure to pen his 'auto'biography. After being taken on a = tour through =, he eventually finds out his new employer is none other than Preston Gilbert, an old Hollywood actor famed/adored for his on-screen gangster =[antics], and [scandal] because of his off-screen mob connections. King is reluctantly persuaded to stay on with Gilbert and his entourage, = Ben Dinuccio and the sultry Liz Adams, and write] =. Along the way, King has to deal with dead men in bathtubs, =, and a dangerous hitman on the loose who's determined to keep a political secret from the past dead and buried...

Pulp is a movie I definitely have mixed feelings about. The first time I saw it many years ago, I quite enjoyed it, aside from the ending, but the second time I was bored off my ass. This third time I was somewhere in the middle, able to reflect back on the things I like about it, but also still see what I didn't. This is a film with a slow moving pace that some might find boring, and this definitely isn't something to watch if you're in the mood for something faster paced.

The best and most distinctive thing about Pulp is its aesthetic. From the typewriter credits, to the fanciful and sometimes misleading narration that makes the proceedings feel like a self-aware pulp fiction novel, this lives up to its title.

Where the movie starts to disappoint is in its story, which feels lacking. Not much at all happens in the first hour/at all, and you're liable to be bored by the lack of any salacious or outrageous instances and/or goings-on. Things don't improve a whole lot in the climax, which has a decent final showdown, but one that doesn't fully satisfy.

Another issue is that Pulp feels like an ensemble piece without the ensemble. Mickey Rooney takes about 50 minutes to finally appear], then when he does he gets killed a short time later, while other distinctive characters like the Alice in Wonderland fellow is out of the picture after a couple of scenes, the womanising cheat of a fortune teller only gets one, and even the defacto antagonist contract killer barely appears or has any dialogue after his first scene. All of this leaves us with Dinuccio and Liz, the two least interesting characters as far as I thought, who accomplish practically nothing between the two of 'em. It

As far as protagonists go, Mickey King's not really likeable, nor is he meant to be, but he's amusing to follow. His only really annoying moments are the fact that he ditched his wife and kids like a dickhead before the events of the movie, and what his actions do to his ally at the end. His funniest parts of the movie are the moments of disconnect between his narration and his actions. They don't come a lot, but they still entertain plenty when they do. "=="

King's narration never gets insufferable, but there are a few points where it feels like it's telling us too much and actually showing too little. For all his talk of the jigsaw pieces coming together, we're not really privvy to the [uncovering]  mystery, not until we're just told the new developments.

Now comes my biggest frustration with Pulp-Its conclusion! There's a lot of problems to unpack. The first is that the big secret the main bad guys are trying to cover up is ultimately underwhelming. For all the build-up it gets it's a pretty paltry development, and this weak reveal almost ruined the movie for me.  Secondly, the climax is an action piece with pretty much no story attached to it and no character for the hitman, who dies without a word, and this is followed by a non-ending if ever there was one. The credits just start rolling after a random scene! We are at least treated to a little more film as the credits whizz by, with a dialogue-free flashback to the ill-fated hunting party [not really doing much], and a couple more lines from King. His final line is ok, and gives the impression that he will eventually end up exposing the truth, but doesn't really help make this ending any more palatable, since we don't get to see any of that.

The Italian setting (though filmed in Malta) is very lush, with its arid plains, seaside vistas, and ancient ruins. Something that adds a bit of  to the movie is how we see political pictures of a certain figure all over the place. You don't notice it at first, not because it's not obvious, but because political ads are so common you don't take notice of them or think they're relevant, and then when you find out this is an important player in the story, you're suddenly like 'Ohhhh!'. It's a disappointment that we rarely (if ever) actually see this character outside of pictures, and never get to know him. We don't even know what the dude's damn politics are!

Michael Caine is a great lead, handling his character's deadpan delivery and glib reactions very well. Despite his limited screentime, Mickey Rooney does well in his [twenty-minute] block, and definitely has a substantial role, so its not like this top-billed actor is merely getting an extended cameo. Though I do wish there was more of him before the character dies.

Veteran actress Lizabeth Scott plays the ex-wife to Preston Gilbert and current spouse to Prince Cipolla. Her character feels a bit superfluous, and even takes scenes that probably should've gone to other members of the cast, but instead she gets pushed to the background, even in the ending. Not that Scott gets it much better, as the majority of her scenes were purportedly cut. On one hand I can totally see this as her character seems to hold quite a bit of importance yet doesn't appear enough to justify it, but on the other, if the movie makes sense without those scenes, perhaps that's why they were cut. Still, it seems a bit churlish to coax an actress out of a staunchly held decades-long retirement, only to leave most of their scenes on the cutting room floor.

The rest of the acting is ok. Dennis Price is quite funny, and it's always nice to see Luciano Pigozzi

Ultimately, Pulp is an alright movie. It's got some good to it, some bad, and if you really wanna have some fun with the idea, you could view its plot deficiencies as intentionally reflective of the seedy crime genre the movie is homaging/pastiching. Might not make the film any less boring in places, or its ending any less irritating, but it'd be an ok way to look at things if you must watch it, and I suppose you should if you're at all fans of Michael Caine...