Say, have you ever wondered where Fu Manchu studied, or what he's a doctor of? Peter Sellers has got you covered with his 1980 comedy The Fiendish Plot of Dr. Fu Manchu...

On his 168th birthday, the diabolical Dr. Fu Manchu is ready to once again take his rare elixir vitae, but a mishap causes it to be spilt, and so the  villain has to scramble his dacoit forces across the globe in order to gather the necessary ingredients to concoct a new batch of elixir. The retired but no less brilliant Nayland Smith is on the case though, and swears to bring Fu to justice before he can be restored to full strength... 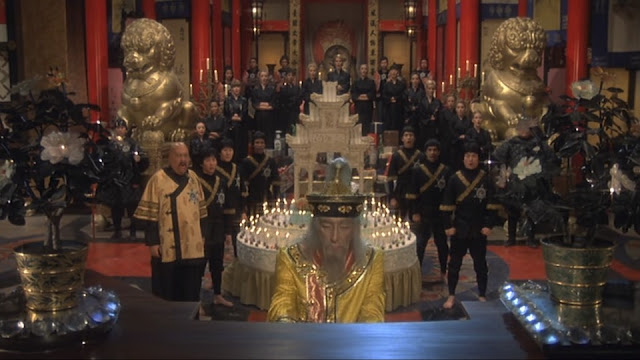 The Fiendish Plot of Fu Manchu was very harshly received on its release, and I was both curious and worried about whether or not this reputation was deserved. It actually made for quite a stressful viewing experience, since I was enjoying myself, but thought that at any moment the penny could drop and it'd suddenly become awful. Let me put that expectation out of your head right away. This movie is by no means terrible. It may not be a masterpiece, but it's quite an entertaining picture, and I had a smile just about the entire time.

This succeeds as a pastiche. While I feel it doesn't go as far as I would've liked it to in that regard, it's still effective, and if I compare it with similar movies such as Sherlock Holmes' Smarter Brother, it's leagues better. While some really enjoy that film I found it rather...spotty, both as a comedy and as a pastiche. Despite being based on a British property from the 1880s, it felt too modern and American. Fiendish Plot too has some touches of modernity and absurdity, but it's played a lot straighter for the most part, and never goes really overboard, though one or two scenes had me close to groaning. Despite its silliness, the film genuinely made me nostalgic for a period of Chinese history that is either long gone, or never actually existed (or at least not exactly like this). 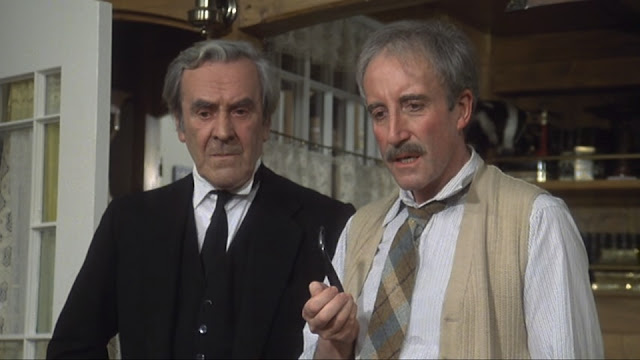 The pacing gets a little staid at the midpoint, but never falters drastically, and the climax is when things get really high-concept. The climax is mixed though. It's actually relatively free of action, and the resolution isn't about the throwing of fists, clashing of swords, or the firing of guns, but is just a conversation! Sounds utterly anticlimactic, right? It almost is, but said conversation is actually quite interesting, and is the kind of exchange you'd only witness in fiction. Two characters, arch enemies, sitting down and talking to each-other about their roles, what they are without the other, and wondering if they should start their game anew. Thoughtful stuff! What follows next however is just plain weird! It's definitely the most modern part of the film, and while it seems kind of out-of-place, it's almost brilliant in a way when you think about it, and not just a non-sequitur. It is still a shame though that there's not really a proper ending. 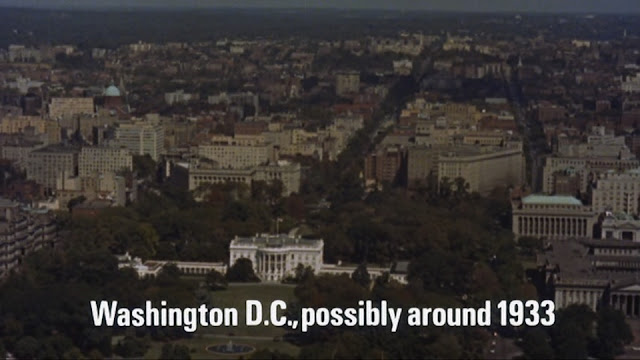 There's some talk (mainly on wikipedia) that The Fiendish Plot is a racist movie. That is bullcrap. The film is not racist. Rather, it's a piss-take on both racism in Hollywood, and of hokey stereotypes. We see quite a few hoary old cliches taken out of mothballs to have a good laugh at the ridiculousness of it all. The only thing that bothered me was Sid Caesar's character using the word chink a few times early on. It's period accurate of course, and it's not like the film itself is siding with that word per se, but it's still annoying. There's also one instance of yellow. It's no doubt meant to be spoofing the use of such words in less 'delicate' films, but while in movies like The Pink Panther Clouseau referring to Cato as yellow is obvious as a clear and egregious faux-pas on his part, the utterance of the word in The Fiendish Plot of Fu Manchu doesn't come across nearly as well.

Apparently this production was a bit of a nightmare behind the scenes, or to put it another way, this was a Peter Sellers film. Quite a tempestuous chap if I do say so myself! Thankfully this doesn't show onscreen. It's very well-made, with neat costumes, great sets, and pretty locations, with Fu Manchu's headquarters getting a stunning snowy mountain environment. The look of everything matches the grand Oriental extravagance that the Christopher Lee series portrayed so well, it looks really good/it's a really good looking movie period! 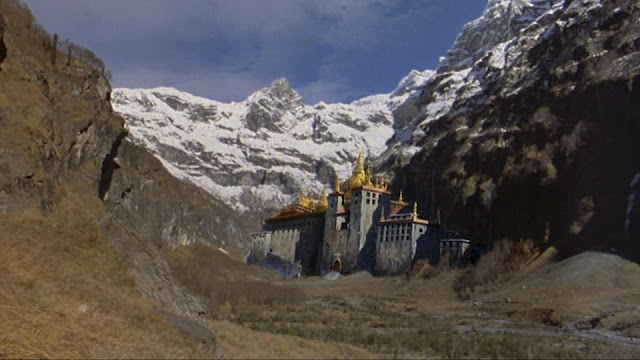 The Fiendish Plot has an ensemble cast, with names such as David Tomlinson, Sid Caesar, Helen Mirren, Steve Franken, John Sharp, and even John Le Mesurier in a small role (with fellow Dad's Army alumni Clive Dunn showing up briefly too). Given the star's ailing condition, this was perhaps a necessity. These performers all do good jobs.

Peter Sellers makes for a good, albeit frail, Fu Manchu. He appears sparingly earlier on, but gets more to do as the story progresses. While his Indian-face in The Party is pretty cringey by today's standards depending on the viewer (surprisingly enough some Indians tend to view it the most favourably!), Sellers' occasions of donning yellowface never came off as offensive because he was specifically parodying the yellowface prevalent in older cinema (or indeed, recent cinema, if the Christopher Lee Fu Manchu series was any indication).

The accent he affects is similar to the one he used when playing the Charlie Chan parody Sydney Wang in Murder by Death, but not silly and more sincere. He doesn't sound humourless of course, since he's Peter Sellers, but it's nowhere near as bad as Glenn Gordon's cringeworthy accent from the Adventures tv series, and never comes across as insulting or demeaning.

His portrayal of Nayland Smith is an interesting take on the character, but this  is also somewhat of a drawback. While it's unique to see Smith in such a wizened state, it's also a bit tough to watch in places considering that Sellers himself was in an all too real frail state, only months before his untimely passing. Despite the humorously themed eccentricities, the character is treated respectfully, just like his arch enemy. He's a bit of a kook in his old age, but he's still shown to be incredibly sharp and intelligent, as well as dynamic when the occasion calls for it. 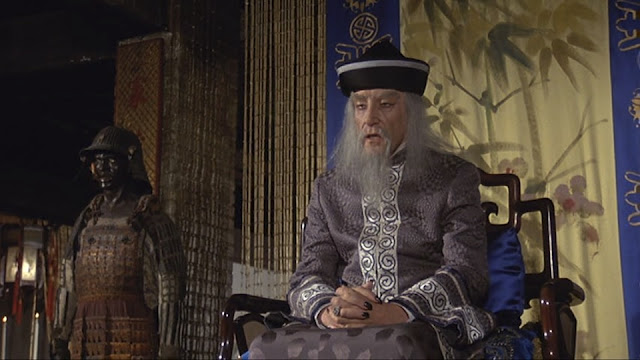 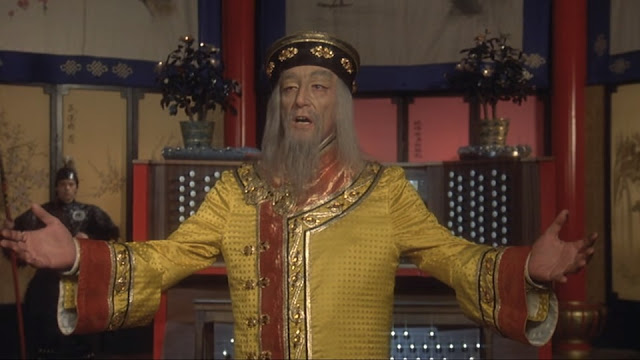 The other characters range from good to ok, while a few come off as unnecessary. The Americans are pointless, and the actors playing them are the only reason I'm not immediately impatient with them. As for Helen Mirren's character, I'm not sure. She appears quite a bit in the latter half, but when you actually think about it she doesn't further the plot much. I wouldn't want to see her gone though. She's the kind of almost superfluous character who you'd want to see expanded rather than excised.

The Fiendish Plot of Dr. Fu Manchu would be Peter Sellers' last film, right after Being There. While not the greatest swansong one could ask for, in tone and quality it's a fitting enough coda to a remarkable career...
Posted by Chris Hewson at 9:10 PM