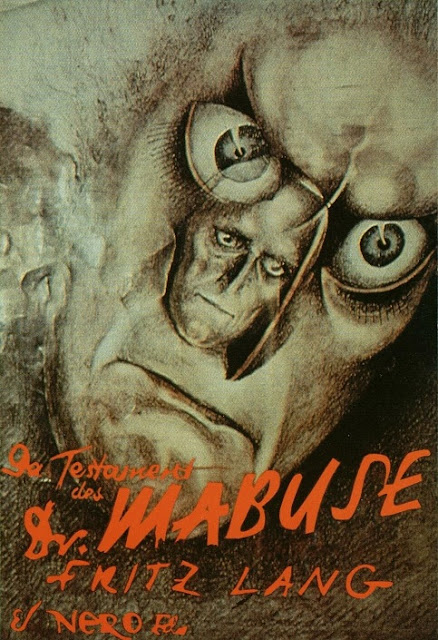 1930s Germany was a turbulent time, and the filmmakers who weren't willingly or reluctantly being drafted into propaganda were making what basically amounted to warnings. This was the case with noted film auteur Fritz Lang, in his last film before fleeing the country...
In Germany, a series of seemingly unconnected crimes has rocked the state. Unbeknownst to the police, they are all orchestrated by one man-A man thought gone long ago. Inspector Lohmann slowly pieces the case together, but keeps stumbling up against roadblocks. How can a dead man still be at large? And what plans does he have for the world?... 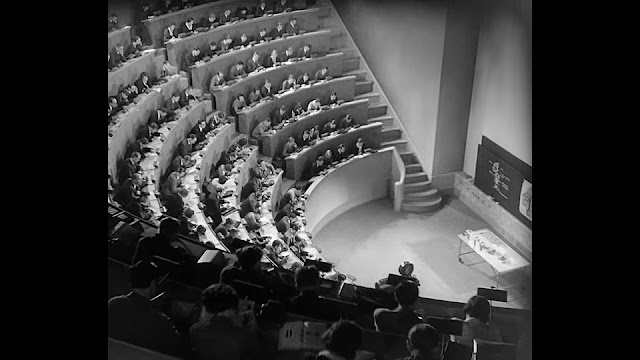 The Testament of Dr. Mabuse is the long-belated sequel to Dr. Mabuse, The Gambler, a sprawling 4-and-a-half hour crime epic. That film introduced Norbert Jacques' character to the silver screen and immortalised him, but his entire character hadn't quite yet been crystallised. The Mabuse of that film was most certainly more nihilistic than others of the era, with no motive beyond doing crimes for the sake of it. But while The Gambler has a very stylish and at times surreal flair, the plot is a fairly straightforward crime story. Whether you like this is up to the viewer. For me it's personally just a bit too much this instead of that, but it's still a monumentous film. 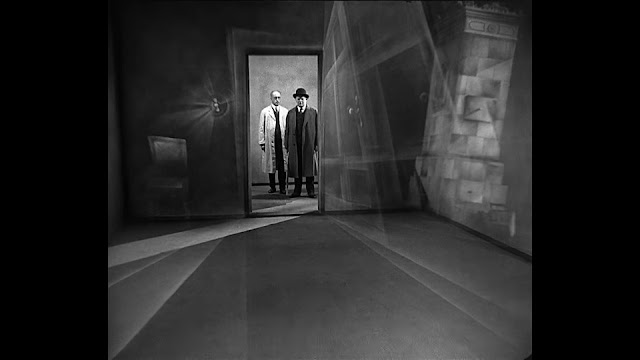 The Testament of Dr. Mabuse really amps up the twisted philosophy the Doctor possesses, and adds an ambiguous supernatural aspect to the series that it has never been wholly without ever since. The movie has an unsettling aura to it that make it go beyond the realms of ordinary crime, and into borderline horror territory. Unlike the pulp fun of Fu Manchu or Diabolik, Dr. Mabuse is certainly a horror villain, and one of the scariest.
My only real problem with Testament comes in the form of its runtime. This really didn't need to be 2 hours long. Many scenes either aren't necessary, or could've had a minute or two trimmed without sacrificing anything. Where things got most frustrating for me was how the big climax and shootout in the film happens when there's 40 minutes to go! There's nothing more annoying that reaching what feels like it should be the finale, only to see there's still a full album's worth of runtime left. 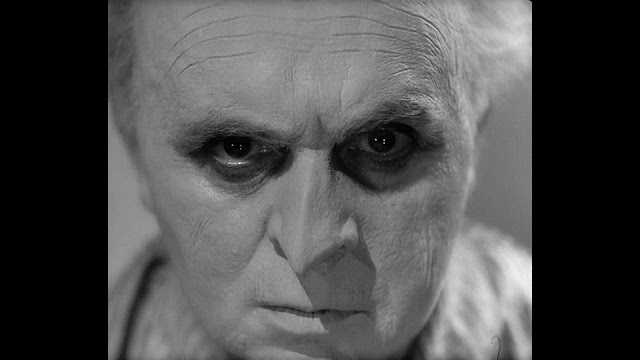 The characters here are strong and well developed. Inspector Lohmann is a loud fellow who won't be seen without his cigar, but is clearly dedicated and passionate (take for example when he doesn't complain once about missing the opera, despite so looking forward to finally getting time of work). He interacts well with the various different characters here. From his anger at disgraced officer Hofmeister to paternal worry once the man's mind snaps, to his flippant and amused attitude towards the unhinged Dr. Baum's ramblings, he's very expressive.
The other main character is Tom Kent, an ex-con fallen back into bad ways, and trying to balance this life with his affections for kind local girl Lili. She is a bit drippy in the romantic scene when Tom reveals the truth, but is otherwise a very good character, and shows great bravery and determination, not to mention loyalty. 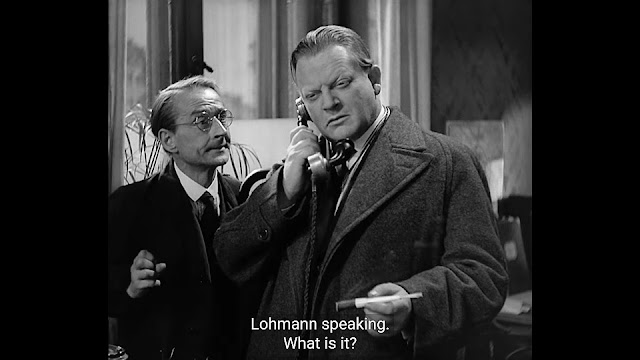 Despite dominating the picture, Mabuse actually has very little screentime. Maybe only 5 minutes, tops, and all he's doing is silently scribbling, staring intently, or delivering a creepy monologue (in perhaps the film's best scene). On one hand it's a testament (*sigh*) to the power of the film that a character who appears so little, and casually dies partway through, still holds so much sway on events. On the other hand, it's a bummer that a movie about Dr. Mabuse barely has Dr. Mabuse in it! Imagine going into the cinema after an 11 year wait between movies, and the main character's not even in it!
The real main villain's identity is sort-of kept a mystery, but barely, and I feel no worry in discussing it here. Asylum head Dr. Baum is an effective enough antagonist, and it's interesting seeing his psychology. Is he just a criminal Mabuse fanboy? Is he actually deluded into believing he is the new Mabuse? Or is he actually possessed? Either way he's bad news. 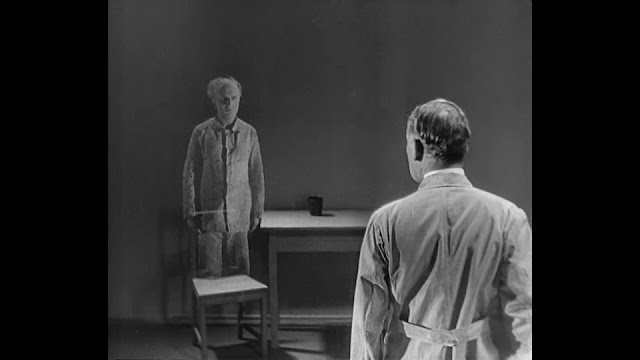 The acting here is great. Returning from the previous entry, Rudolf Klein-Rogge is instantly iconic in the title role. I'm not sure if he's wasted or not. He's a presence in the entire first hour (not counting the ghostly sequences), but doesn't get that much to do. All of his scenes are great, including that famous stare, but I kinda wish we'd gotten a little more of him. Otto Wernicke once again plays the role of Inspector Lohmann, after first playing him in Lang's M. He's garrulous and loud, but charismatic too. Some of the acting can get a bit over the top in places, especially in moments of high emotion, but nothing bad, certainly.
The direction in Testament is by far its highest quality! Lang shows his strengths perfectly, with many shots constructed extremely well down to the smallest degree. He also successfully imbues a tone of expressionism, making this more than just a simple crime film, but also without forgetting its roots as one. Though the sped up running in a couple of instances is weird, albeit thankfully fleeting. 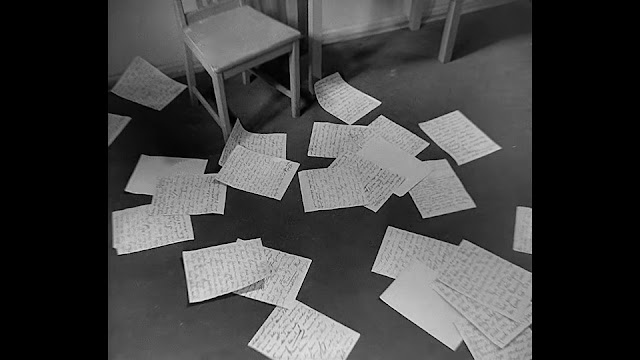 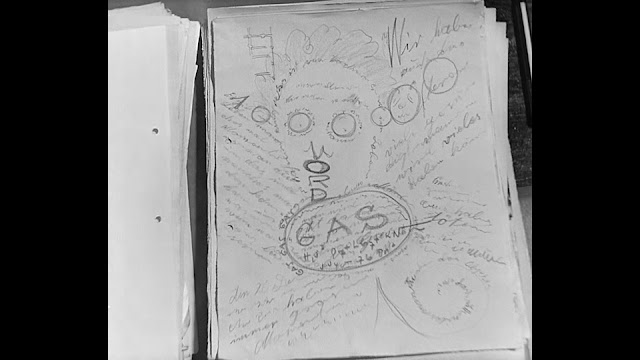 The only time I feel the direction gets a bit carried away is in the chemical fire at the end. This is supposed to be the big catastrophe that heroes have to prevent, and they do succeed before the intended effects happen, but it's like Lang had already spent the money on a barrage of explosions and toppling miniatures, and didn't wanna waste them, regardless of how little sense it ultimately makes.
Testament is simultaneously a very loud yet remarkably quiet movie. Noise plays a big role  And there's one transition form the ominous ticking of a clock to another scene that is breathtaking in its simplicity! Where the silence comes into play is in the music. There isn't any! There may have been a couple of tracks here and there, but none that I could remember. For me as a viewer, the whole movie feels quiet, almost eerily so...And sometimes boringly so if I'm speaking frankly. If a movie is gonna forego a score, the least it could do is not be 2 damn hours long! 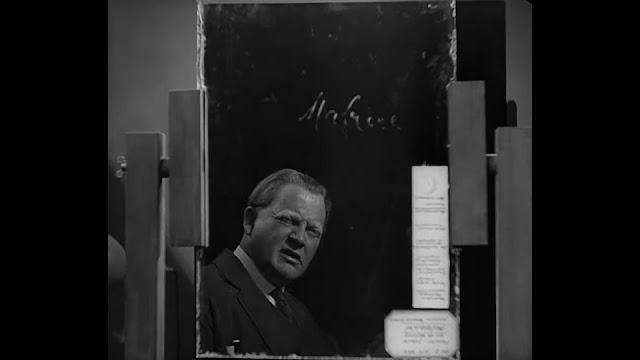 Whether seen as an artifact of its time, or a movie divorced of all outside context, The Testament of Doctor Mabuse stands tall as a classic of cinema. It has inspired an incalculable number of directors, films, and artists throughout the years, as well as spawning further sequels down the track. It's a must watch for anyone interested in world cinema, and in crime or horror. There are none that compare to Mabuse...
Posted by Chris at 8:12 AM