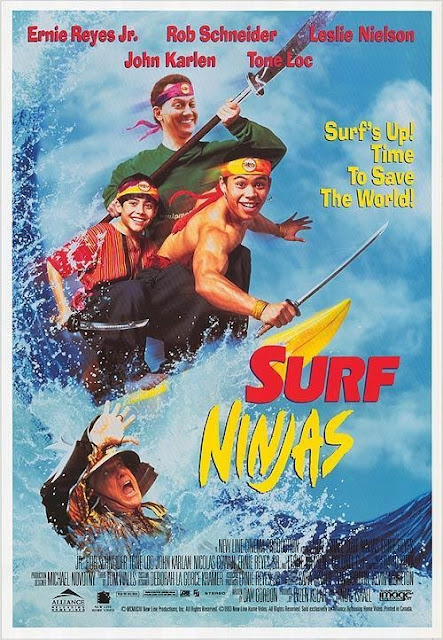 Today's movie is one I had mixed feelings about. On one hand, I adore ninjas! On the other hand, I'm extremely skeptical of all things 90s! Now that's not to say I automatically hate the entire decade. After all, there was some great stuff from the period. Ok, a little, but you get my point. Surf Ninjas seemed to embody a mix of all the worst qualities of 90s entertainment, and I was afraid for how it'd fare, but hopeful, because god knows we have very few movies like this... 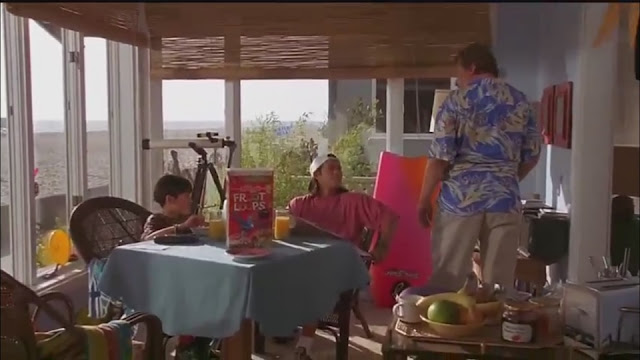 For years, the peaceful island nation of Patusan has been under the iron hand of the tyrant Colonel Chi, and its royal family all but eliminated. The only survivors are Johnny and Adam, two unwitting brothers who have grown up to a normal life in California. The epitome of surfer culture, they breeze through life with no real understanding of the bigger picture, until one day an attack by ninjas leads to the kidnapping of their adopted father. Intent on getting him back, the two are guided by the mysterious warrior Zatch, who tells them of their birthright, and will train them for the fight to come... 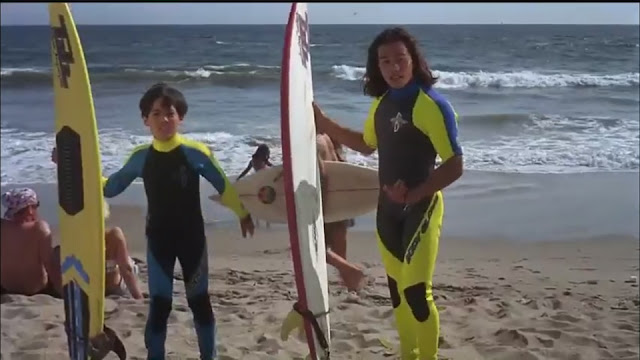 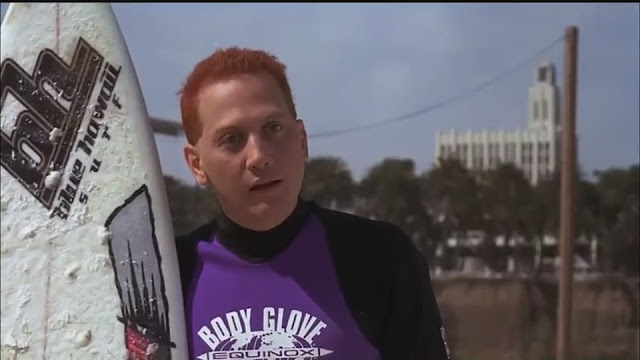 Despite my hopeful but present skepticism, Surf Ninjas is actually a pretty fun time! Yes, it is everything you think it's going to be. A bunch of surfer teens going "Like, whoooaaah,", "Radical", "Bodacious", "Psych!", and "Wassupppp?" etc. If you have a low tolerance for this sort of thing, stay away! But thankfully none of this intrudes too much on the overall film, and it paints a good picture of the subculture. And the surfing plays a helpful role in the climax too, so it never feels superfluous, as if it was just window dressing over an existing script.
The movie gets off to a good start, introducing us to enough its and pieces at a time, before giving us the full picture. There's a variety of fun setpieces, both comedy and action (not to mention musical, with a great Beach Boys inspired scene that is too short!), before the action moves to the island and the climax nears. 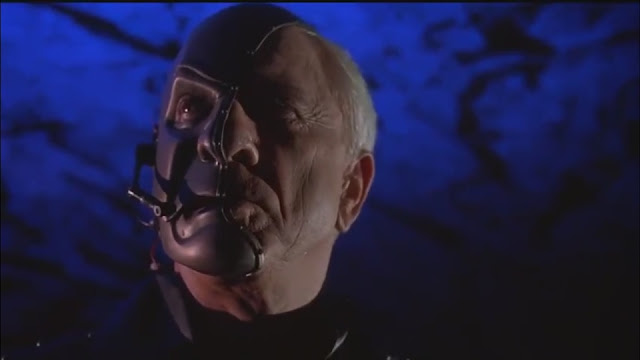 The story is pretty basic stuff, but handled in a fun way. The leads are two surfer bros, but always feel up to the tasks they're given, despite their confusion and protests. We the audience are never left feeling like the movie's shackling us to two idiots. There's a cool level of mysticism here, that's never too overt, but always there. I really dug how Adam's powers as a seer are presented in the form of his Game Gear. It felt like a nifty modern upgrade that still felt in keeping with how the powers work.
Whether there are enough ninjas in Surf Ninjas to justify the title is up for debate. They're only random henchmen, and there's no real reason for them to be ninjas, but they do appear frequently enough, and this is definitely on par with classic 90s fare like 3 Ninjas and Beverly Hills Ninja. Man, for all the crud that came out in the 90s, it really was a golden age for ninja entertainment! 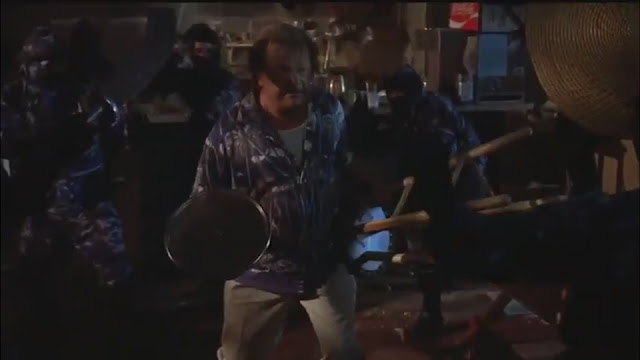 Where the film falters is in its messages. The film ends with the liberation of Patusan, as expected, but the brothers promptly dissolve the monarchy! On one hand, I see where they're coming from, as they want their people to have complete and total freedom. But on the other hand, there's never been an instance of a bad monarch in their history, and the family is a beloved institution, so why can't they keep the monarchy? After all, they're clearly shown to be a good and heroic influence for the island, and are literally granted magical powers by the heavens to help their people! Speaking as a heathen Aussie convict, that sounds like the kind of king or queen I'd actually want!
Second up is an area where the movie almost succeeds on-Arranged marriages. This practice is mostly seen in a negative light in cinema, for obvious reasons, as we always get depictions of the unwanted kinds. But this overlooks the many times where it works totally fine, i.e. two awkward people who are never gonna have any romantic luck have it done for 'em. Surf Ninjas does this well, presenting these two betrothed actually digging each-other. The film cares about their consent in a way that manages to be modern and respectful to their culture...Then the film has an abrupt and out-of-nowhere take-that to the tradition in the last 20 minutes! I thought it was unnecessary. It felt like a concession to the viewers who'd find arranged marriages completely unpalateable, but in doing so spoils the story they'd been portraying.
Swinging back to the positives, let's discuss the characters. The teen hero and his younger brother are an endearing duo. They're slackers and ne'erdowells, but in a funny way, and never come across as mean or unpleasant. And once the chips are down, they're quick to act. The family dynamic they have with their adoptive father Joe is amusing enough, and slightly sweet. 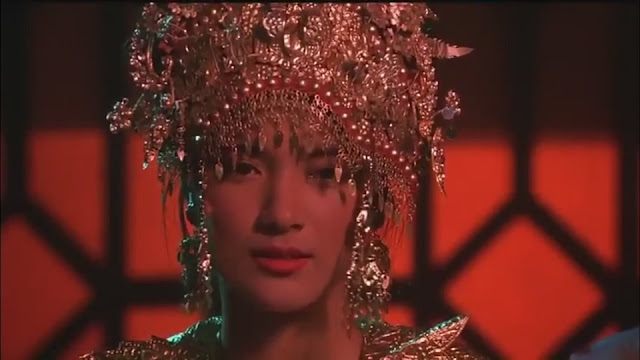 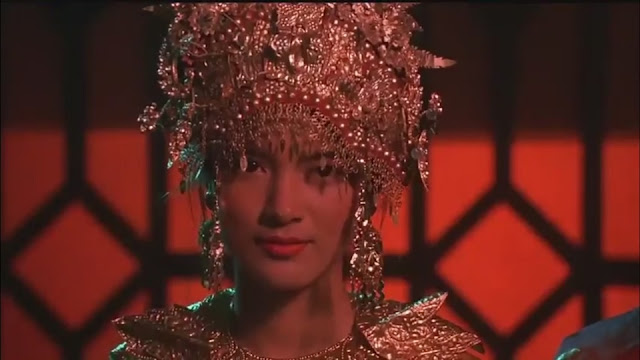 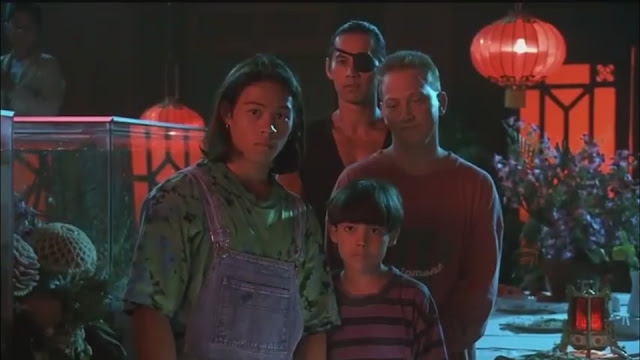 Ro-May is a spunky love interest. While she starts out as very modest and sweet, she soon proves she's not just a lover, and joins the heroes in the island revolution. She fills the role of a second generation immigrant who's part of her new country, but aware of her own culture and practices, actively keeping them alive. She does get one weird moment though, when she knocks out a guard by seducing him, and when a surprised Johnny asks what she said, she replies with "You'll find out on our wedding night!" Oh my god, you teens are such hornbags!
A potential bane of the film is the comic relief friend, Iggy. He's constantly letting off zinger after zinger. Half the time they're amusing enough, or at least tolerable, but the other half I felt like belting him upside the head. How annoying he can be really depends on the viewer, but at least his presence is worth it at times, like how the other characters treat him, knowing when he gets annoying. "If you keep telling your cave stories, you and your cousin are gonna have a lot more in common."
The villain is a promising one! Firstly, he is a cyborg dictator! Doesn't that already sound amazing? Secondly, he's played by Leslie Nielsen! Oh I am sold! But here we come to one of Surf Ninjas' only real problems, and it's a big one-The complete lack of Leslie Nielsen! I understand why he doesn't interact with the leads while they're in another country. But you'd think that when the heroes finally reach Padustan, almost an hour in, that we'd finally get to see them face to face, but shockingly he actually gets even less screentime! Only in the very last fight does he show up, and it's disappointing when the final fight with this brutal dictator is over when he's knocked into a puddle of water, and dies instantly. 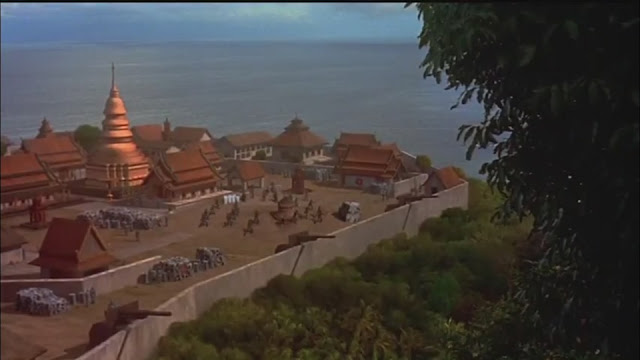 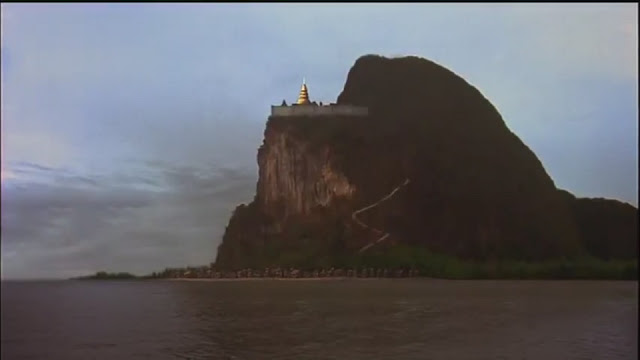 The acting here is all good. Ernie Reyes Jr. and Nicholas Cowan are good leads, with plenty of charisma and life. Ernie Reyes Sr. plays their protector, and does well, while also handling amusing moments well. Rob Schneider meanwhile is Rob Schneider. That should tell you what you need to know! He's annoying in some places, but not too bad in others, and at least never felt unnecessary. Kelly Hu is a delightful presence, demure and pretty, and kicks some ass too!
The decision to cast Leslie Nielsen as a ruthless dictator is strange, and he's never presented as anything but a comic character. This does take away from some of the seriousness the movie tries to portray about Patusan's repression, but this kind of villain is more fitting for such a movie, not to mention more fun.
The locale here is great! L.A. looks the same as it always does (I honestly can't tell American cities apart), and looks like a nice holiday destination. The 'Little Patusan' district is neat too, a Chinatown-esque suburb. But what really stands out is Patusan itself. Filmed in both Hawaii and Thailand, it's stunningly gorgeous! We get sunny beaches, lush green forests, neat cave systems, and fantastic South east Asian temples. 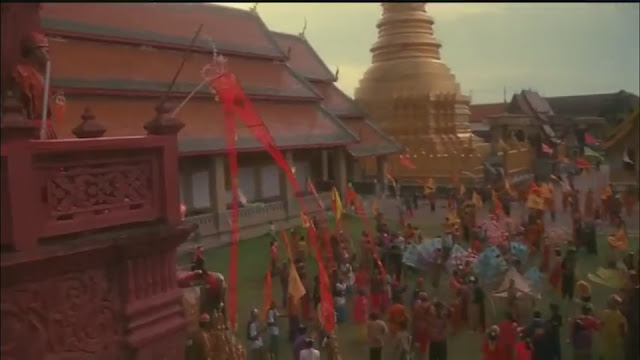 Surf Ninjas is a neat time capsule of the 90s surfer trend, wrapped up in a pretty entertaining story, and at the very least it's a nice and simple way of killing 80+ minutes....However, there are also no surfing ninjas, so I understand if that's a dealbreaker...
Posted by Chris at 6:42 PM