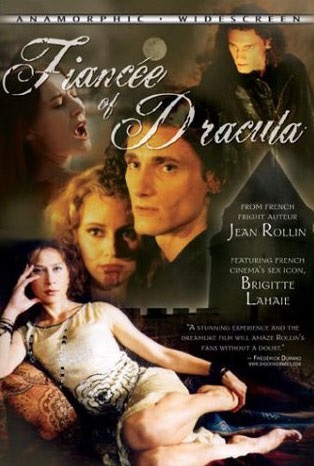 Tonight, it's murder by the sword! And tonight, I'll be reviewing what is thus far my favourite Jean Rollin film-Fiancee of Dracula!

I've been on a bit of a Rollin bender the last few days, having watched this, the incredibly boring Sidewalks of Bangkok, the just-as-boring Zombie Lake, and Requiem for a Vampire*.

*I watched Requiem for a Vampire and a bunch of The Abott and Costello Show eps as a double feature. Yeah, that was as strange a viewing experience as it sounds!

Fiancee of Dracula is about a Van Helsing like professor and his assistant, who are looking for the remains of Count Dracula, and they come across all sorts of strange events and people, as well as monstrous 'Parallels' over the course of their journey...

The movie opens with a never-named Professor (Jacques Regis) and his young assistant Eric (Denis Tallaron) watching a crypt at midnight, waiting for a vampire to emerge. When the vampire (Sandrine Thoquet) emerges, a dwarf, Triboulet (Thomas Smith) comes to her. Triboulet, who is in love with the vampire, is grabbed by Eric and the Professor. They demand to know where 'the master' is, and Triboulet tells them that a 'Parallel' at the 'Tower of the Damned' knows.

The duo head to said tower, find 'the madwoman of the tower' (Magalie Aguado) and hypnotize her. Thanks to the hypnotized woman, they find out that only the demented Queen of Shadows knows where Dracula is, and they find out her location-she is held by nuns of the Order of the White Virgin. 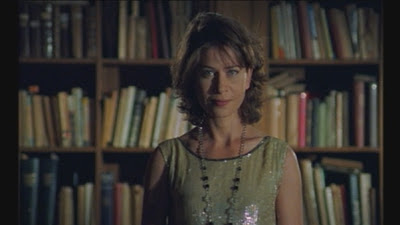 The Professor and Eric go to the convent of the Order, where all the nuns have been infected by the madness of Isabelle (Cyrille Gaudin), an insane woman they are caring for. After some crazy talk, Isabelle tells the two that she is the betrothed of Count Dracula. The professor hypnotizes her, and instructs her to leave the convent at midnight, letting nothing stop her, in the hopes that she'll lead them to Dracula. 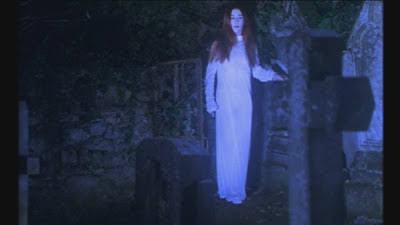 Come midnight, however, the parallels manage to get Isabelle. And as hard as the Professor and Eric try to stop it, the wedding of Dracula is going well underway... 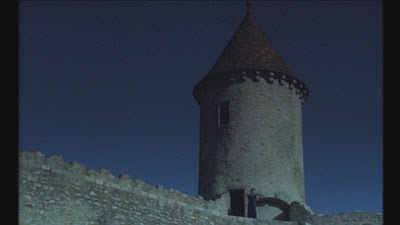 Lots of great directors seem to start sucking late in their career (cases in point, Dario Argento-The Third Mother, Wes Craven-My Soul to Take, John Carpenter-too many to list), so did the same thing happen with Jean Rollin, with his 2002 effort Fiancee of Dracula? Hell to the no, this movie is great!

One thing I liked a lot about this film was the mystique of Dracula. Over the course of the film, he never appears, and we never hear much about him, yet he's the driving force behind the events of the film. That mystique does crumble a bit once he appears, and we see that he's just some guy in a cape (frankly, I wouldn't care if he never appeared in the movie), but by the end, that didn't bother me too much. 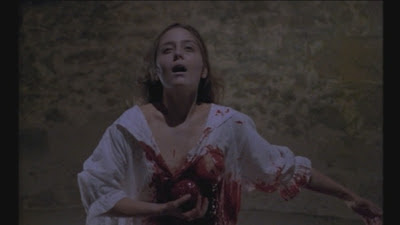 There are a couple of plot points that the film neglects to explain. The big one is that the movie seems to start midway, with the Professor and Eric already on their quest to find Dracula's remains-a quest we know nothing about. And we know nothing about the professor and Eric at all, least of all WHY they're involved in all this 'Parallel' business.

And that brings me to the only real problem I had with Fiancee of Dracula-the plot. Now unlike The Sidewalks of Bangkok, the lack of much plot doesn't affect this movie in many places, but in others, it does. Like, who is Dracula in this universe? Is he an evil vampire a la Christopher Lee, or what? He doesn't appear much, and when he does, he doesn't do anything but say a couple of cryptic things. I may have appreciated some of the mystique the count had in this movie, but not all of it. 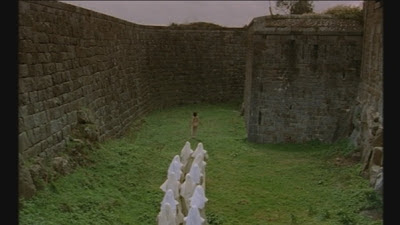 Another silly part of the plot is the super insta-love with Max towards Isabelle. Seriously, only a few days ago, I saw a film from the 50's with insta-love between the two leads, but even that doesn't hold a candle to Eric in this!

The supernatural beings (called Parallels) in this movie are pretty cool, from the vampire woman, who's a walking corpse with no initiative of her own, to a madwoman by day-baby-eating ogress by night, a witch couple, and the She-Wolf, played by Brigitte Lahaie.

Now as for the Ogress looking purely human, and not ogre-ish in the slightest, I actually don't mind that, thanks to my extensive knowledge of world mythology. Ogresses tend to (in Arabian mythology at least) disguise themselves as normal human women in order to trick their prey. 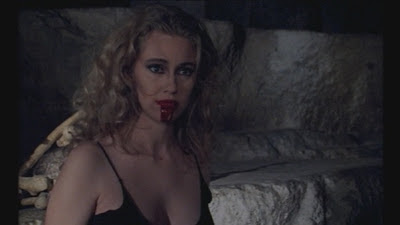 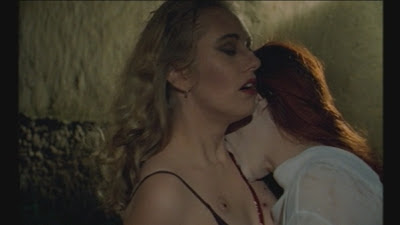 There isn't much violence or gore in Fiancee of Dracula, but what's there is fine. There's also a surprising lack of nudity in this particular Rollin film.

The acting in this film is all fine. Cyrille Gaudin is especially good as Isabelle, the kinda-insane titular fiancee of Dracula. As for the actor who plays Drac, he looks fine in the role, which is all there is to him, as he only has about two lines of dialogue in the whole movie. 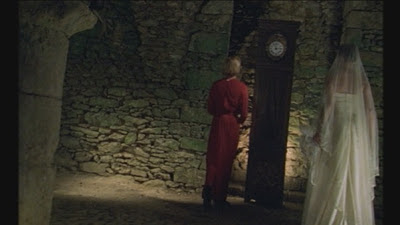 Now, when it comes to artistic films, I'm usually one dull tack, and that is indeed the case here. I didn't gauge a single thing from Fiancee of Dracula. Though however, I did notice (Read: I googled the quotes), a few linking things. The recurring "The presbytery has lost none of its charm, nor the garden its colours" line is from Gaston Leroux book The Mystery of the Yellow Room; the book we keep seeing with Isabelle is Queen of the Sabbath, by Gaston Leroux; and the line "I am, I am the small boy who went to look for your scarf by the sea" is (a paraphrasing at least) from The Phantom of the Opera...by Gaston Leroux! 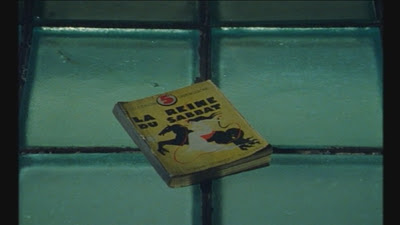 But did I understand what all these things meant? Largely, no. I have no idea what signifigance the line "The presbytery has lost none of its charm, nor the garden its colours" has.

While I might not have understood this film, I'm still thinking about it, and what many of the various things mean or symbolize. Fiancee of Dracula does have merit as a symbolic film, it's not just some meaningless, pretentious garbage.

There's something I'd like to quote from blogger Tenebrous Kate's review of this film (she's awesome by the way, you'd do well to read her blog), as she words it way better than I could.
"The overall effect of watching this film is of nostalgia for a supernatural past that never existed but is slowly dissolving. It's tragic to watch the fading monsters and know that the present day world is just outside of the universe of this film, threatening to erase this strange land."
In places, I definitely did get that impression-mainly from the Ogress. By day, she's a careless madwoman who dances around a dilapidated tower, usually being victimised by young hoodlums. And by night, she's a starving ogress, stuck in a cave, and her hunger is only sated by human flesh. And the vampire woman is almost entirely pure instinct, to the point that she doesn't even notice that she's walking outside while the deadly sun is coming up.

While watching the last minutes, I was afraid that there'd be a nothing ending, but the final frames made me like the ending!...Except for one thing...

...Eric, you had one job, ONE JOB, and you fucked it up! What the hell kind of vampire hunter doesn't arm himself with, I don't know, a STAKE, or a super-soaker full of holy water?! When he had an opportunity to kill Dracula, Eric just watched blankly as Drac rose from his coffin! 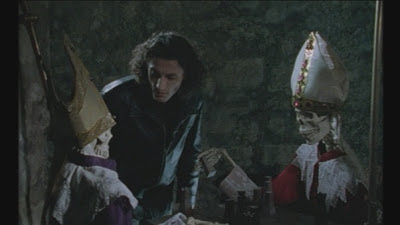 While that little thing did irk me, I grew to like every single thing about Fiancee of Dracula's ending more and more soon enough.

The film is darkly funny in places, always involving the nuns, from the crazy stuff they do thanksto Isabelle's influence, and there are a couple of funny lines during a nun attack near the end.

The film's scoring is very good, and there are a few awesome bits of music here and there!

Rollin usually only had small budgets to work with, but he knew the importance locations can have on a film. Fiancee of Dracula may have had a small budget, but it feels grander, thanks to the use of it's locations, such as a castle, or a dilapidated tower. Also in the film is a beach that Rollin likes to have in his films (it features heavily in Rape of the Vampire). 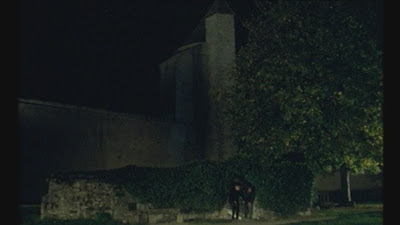 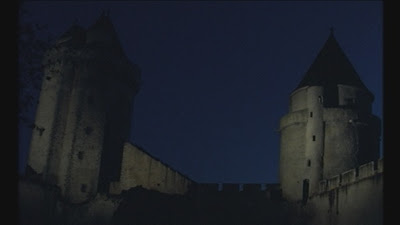 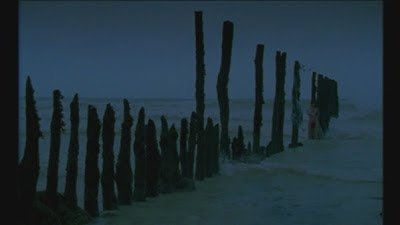 Fiancee of Dracula won't be everybody's cup of tea, but I definitely enjoyed it a lot! It was a fascinating sit, and one I'll definitely revisit in the future!

Now, before I fly to the world of the supernatural, know that the the presbytery has lost none of its charm, nor the garden its colours...
Posted by Chris Hewson at 9:14 AM