Thoughts on the Ending to Bloody New Year

I meant to do this post a while ago. Better late than never, I guess... 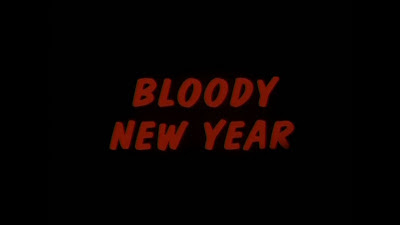 I'd like to talk about the ending to Bloody New Year, so obviously there'll be spoilers involved.

You're still here? Good! Either you've seen the movie, or just don't care, or you do care, but don't want to pay 200 dollars to see the film. Let's start then.

Bloody New Year is a horror film about a bunch of teens who go to a deserted island, where they find a hotel. It's abandoned, yet they don't think so for a while, as everything looks fresh and new. Soon enough, however, ghostly things start happening on this island...And it actually isn't really supernatural! It isn't a Scooby-Doo reveal either. 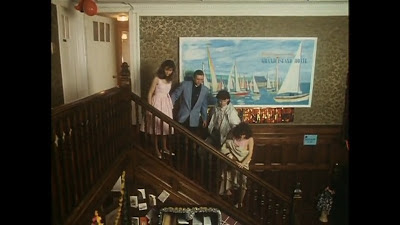 Partway through the film, a TV turns itself on when no-one's looking (I guess the TV knew we were watching!) and we see a panel of scientists discussing an experiment. The experiment is doing light tricks in order to make planes stealthier, and one scientist thoroughly derides the experiment, claiming it's dangerous, playing God, and interfering with time itself! Uh, dude, bending light is a light trick. It won't destroy the web of time! Unless...I once shone a torch through a glass of water, bending the light, HOLY SHIT, I must have destroyed time! I'm sorry everyone!

As it turns out, that experiment went wrong, and the plane crashed, and that really fucked the island up, shattering the time there. Now while the 'bending light' explanation for the experiment is stupid, everything else about it is great! There are several things we see over the course of the film-an open magazine that one of the teens was reading closing itself: after one of the group play some pool, the balls rearrange themselves back to the original position; the hotel looks fresh and new, despite having been abandoned in 1959; footprints appear then disappear; we sometimes see the zombighost of a pilot; on the island's shore is razor wire and a Keep-Out sign (likely put up by the government) etc. At first, these seem like the regular doings of a haunted house, but when you realize that time was destroyed on this island, all these little things come to mind, and (to me at least) it's a great bit of foreshadowing. What I think is so great about it is that these were all little things that I'd largely forgotten, and then I remembered them all, and everything came together in my mind. I thought the climax's reveal was fucking stupid at first, but after I thought for a moment, I was impressed at how much sense the explanation made when I added together all those little things up! 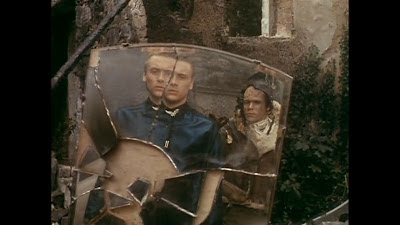 This does bring up a few annoyingly unexplained things, however. Like, why are the island's inhabitants evil super-demons?! Seriously, why?! Did they just think, "Hey, the web of time's been destroyed. Happens every Tuesday. *yawn* Oh well, I guess I'll just turn into a deadite now and violently slaughter any visitors to this island."?! Also, there were a few things that didn't make sense once the reveal came. For example, how does the shattering of time turn tablecloths into giant seaweed monsters?! How does it make people in films leave the screen and attack people?!

Now that's really all I have to say about Bloody New Year. I would like to touch upon the main theme though-Recipe for Romance.

Don't you hate it when you hear an awesome song in a movie, but when you listen to the officialy released version of the song, it's different?! That's the case here! All versions on youtube have the same different beat to them (it kinda sounds similar, but at the same time, it doesn't), so the only way to listen to the version of the song that I like better, is to track down a copy of this film...Which is not an easy task! I watched Bloody New Year on Dailymotion, and no matter what I try, or what computer I use, the video ALWAYS makes constant long pauses that can't be stopped! So I guess I'm just shit out of luck... 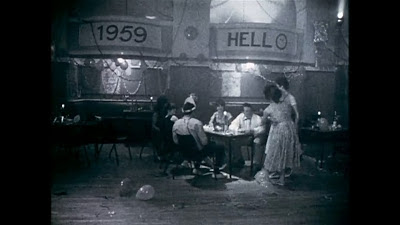 ...BUT! But, to cement my claim that this particular version of the song was nowhere to be found on Youtube, I went looking, to reverify, and I came across the version of the song I wanted! It was only uploaded about thirteen days ago, which is why I didn't know it was there before. So, go forth and listen, my friends! Listen, and goodnight!...