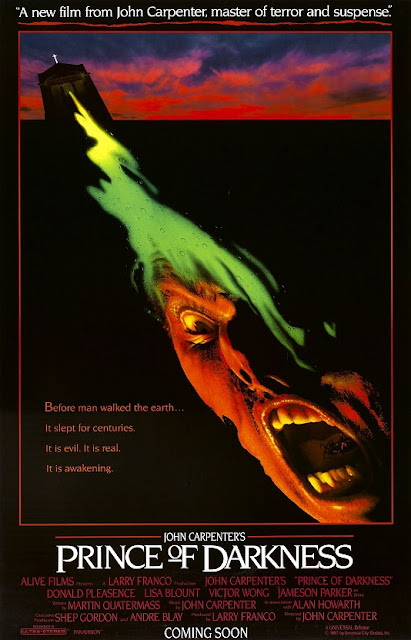 Famed genre director John Carpenter has had a critically mixed career. Some of his films were instant classics, while others had to wait a long time to earn that status in the eyes of the world. The Thing was on the rocks for years, before finally achieving its fame. As his career went on this became more common, partly because he's a director on the wane, but also because critics love to rag on an artist late in his game, as an easy target. One such film is Prince of Darkness, which has also come to attain a sizeable cult following... 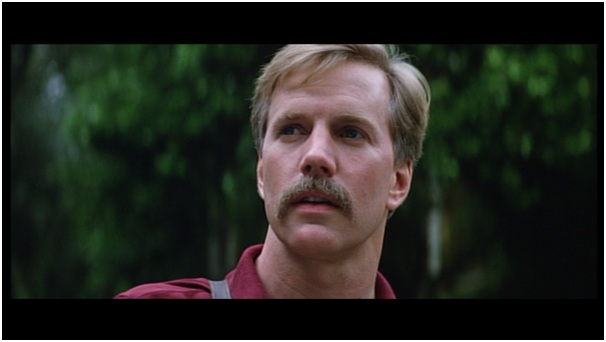 A small church in the city has held a dark secret for years. Upon the death of its last remaining member, a priest learns of what lies within its walls, and gathers together a scientific research team, made up of college students, and his old friend Professor Birack. Together they analyse a mysterious green canister in the basement, and come to some shocking conclusions. After experiencing some prophetic nightmares, they soon realise the threat this object poses, and what will befall the world if they fail to stop it... 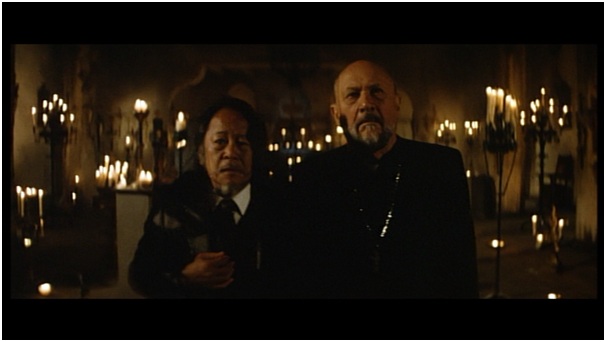 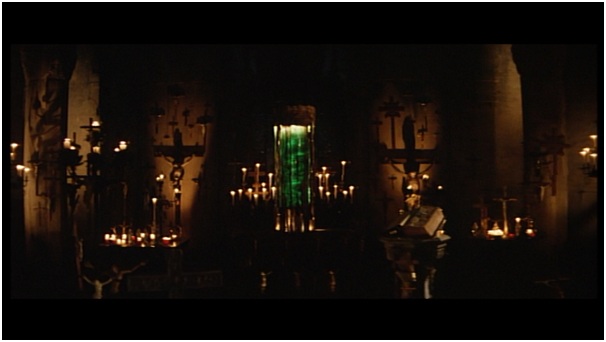 Prince of Darkness is a unique and interesting horror film. It's a low-key and eerie picture, with a palpable sense of doom throughout. From the first scene we get a sense that something is not right, and we follow a bunch of intelligent and proactive characters as they try to make sense of of this nightmare before it's too late.
The movie deals with some very intriguing concepts, mixing science and the supernatural in a really satisfying way. It introduces its audience to things like quantum theory and matter versus antimatter in such a way to make it interesting, and never boring. The ideas of Jesus being an alien and Satan being an anti matter being made up of green liquid is one that could have been goofy or ridiculous in the wrong hands, but here it's fascinating. 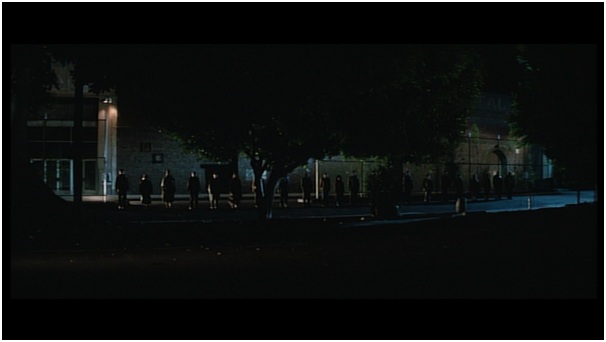 Prince of Darkness owes a lot to the works of Nigel Kneale, echoing the same themes of ancient evil waiting to be unleashed, with a scientific look at fantastical and even biblical elements. I think it does a fantastic job bringing these ideas to the (then) present day, and Carpenter once again proves himself to be a devoted fan! And as can be expected from Kneale, he hated the movie, without having seen it of course. A top class writer, but an absolute knobhead! Boy could I rant about him for ages if ya let me.
John Carpenter's direction is stellar as always, with a particular high spot being the creepy low-quality future transmissions. With its unearthly quality and portentous content they are ranked as some of the most unsettling moments in a film already brimming with spookiness. Other highlights are the tense closet attack, and the computer interaction. 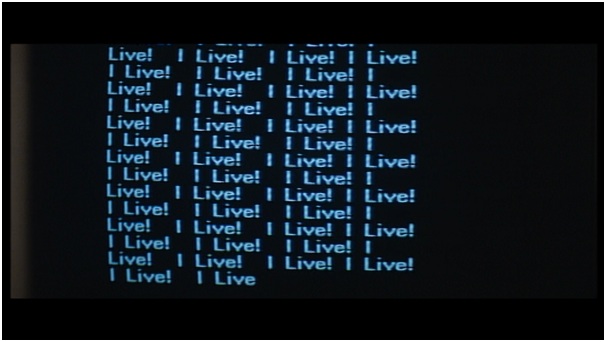 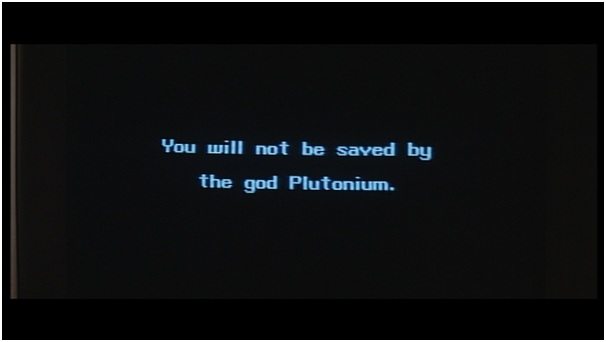 While telling an ambitious story, the action in Prince of Darkness is more grounded, set entirely in a single small building. I find this effective, aas it's not trying to do too much, and let its imagination exceed its budget or runtime. I find it does this without sacrificing its ambition either. All too often you'll see a movie that has a great idea, but not the budget to pull it off, so they don't try. Here though this single location really feels important.
The movie gradually becomes a siege movie, perhaps reminiscent of earlier Carpenter works. The climax is an all-out battle, with an assault on all angles, and the main possessed girl trying to bring in something far worse from beyond the veil.
All of this culminates in a very effective ambiguous ending. On one had I have no idea how it makes sense, but hey, it's ambiguous for a reason. Maybe it's not even happening, and really is all a dream this time! One thing's for sure, the trailer certainly does a bizarre job. It not only shows the last scene, it actually shows what happens next! The young hero is attacked by a menacing...title card!
The effects are wonderful. Entirely practical, we've got convincing gore effects, extremely gooey make-up, and some nice props, such as the giant finger at the end. A little plasticky, but still great, and ominous. There are also creative visual uses of liquid physics, from the mysterious liquid when possessing people, to the watery mirrors. 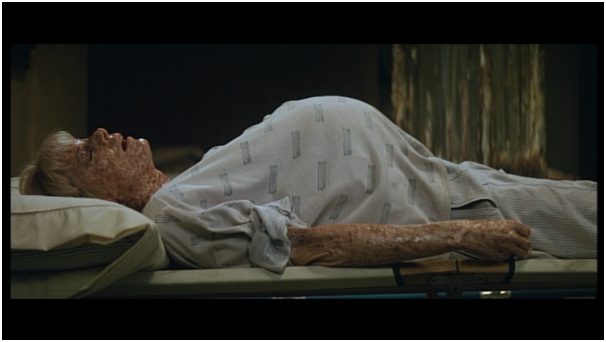 The acting here is nice, with a familiar stable of Carpenter regulars, plus newcomers. Donald Pleasence and Victor Wong work great together, and bring some class to the movie. Young Tom Atkins lookalike Jameson Parker rocks a neat moustache, and is an alright lead. Dennis Dun is nice as the comic relief, and has some strong dramatic moments too. Lisa Blount and Susan Blanchard both excel in their roles, and the remainder of the cast all do well too. Also appearing in a small role is Alice Cooper!
The soundtrack to Prince of Darkness is a subtle and ominous one, with tracks that really set the mood, and get under your skin with very little. John Carpenter scored the movie, together with collaborator Alan Howarth, and once again he proves his musical chops to a tee. 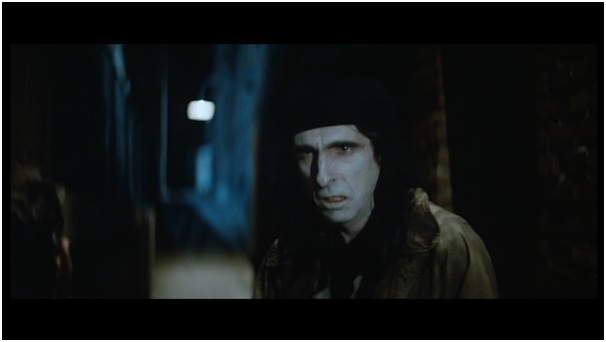 Also of note is a track not in the movie itself, but recorded for the production-The titular Prince of Darkness by Alice Cooper himself. It's a nicely rockin' tune. Totally ill-fitting with the movie itself, so it's understandable it wasn't included directly, even if it is a shame. Between this and The Man with the Golden Gun, Alice has quite a history of movie themes that almost made it!
Prince of Darkness was critically savaged on its release, and got an unfairly bad rap. You have to wonder if these high-falutin' critics ever actually watch any of the things they trash. I've seen things worse than they could ever imagine, and I sat through every second! Time has been kind to this film though, and while its reputation isn't as high or mainstream as The Thing, Prince of Darkness has built up a solid fanbase, and will only grow stronger as time goes on...
Posted by Chris Hewson at 8:10 AM