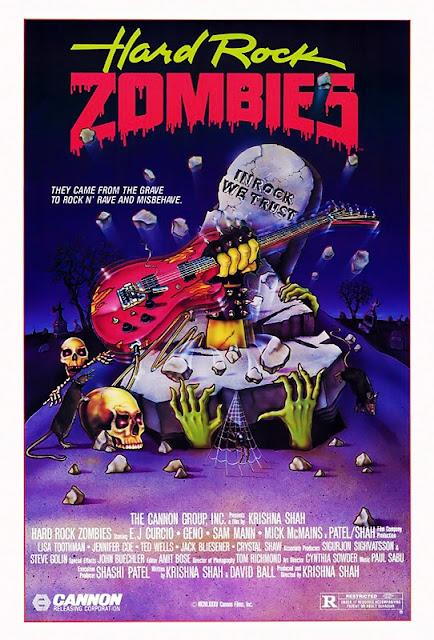 Indie rock band Holy Moses is going from gig to gig, having fun, when they are warned away from the town of Grand Guignol by teenager Cassie. They take it as a strange invitation, and encounter a frosty reception. The band are taken in by a seemingly hospitable family, but soon end up on the chopping block when it turns out they're in the den of a family of deranged serial killers. At their funeral, Cassie plays their demo tape of a mysterious resurrection song, and suddenly the rocking dead rise, ready to take revenge on this town... 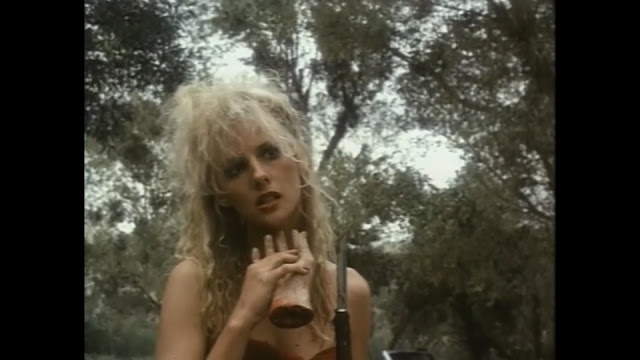 Hard Rock Zombies has gotten quite a cult following, which is unsurprising when you see the film. It's not well made or a good movie in the same sense as something like, let's say, The Shawshank Redemption, but it's definitely worth a watch-Many watches! There's an argument to be made that it's trying to be bad, and this could strip the movie of enjoyment, and in some ways I agree. Some moments land, others don't. But for the most part it's a fun movie, with more than enough to keep you entertained. 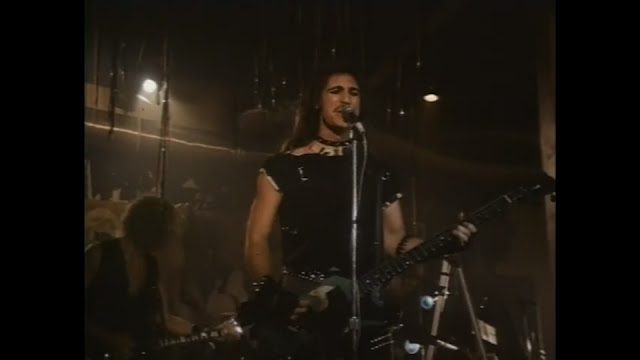 The plot here gets off to a nice start, with the music tying in in a nice way. As it goes on it gets thinner and thinner, and trying to dissect the how's and why's is pretty fruitless. Like why are Jesse and the band good zombies, but all the people they kill just the regular kind? And it is a bit weird that the whole zombie invasion of the town is the fault of the heroes (though at least they take care of it but good in the end!). 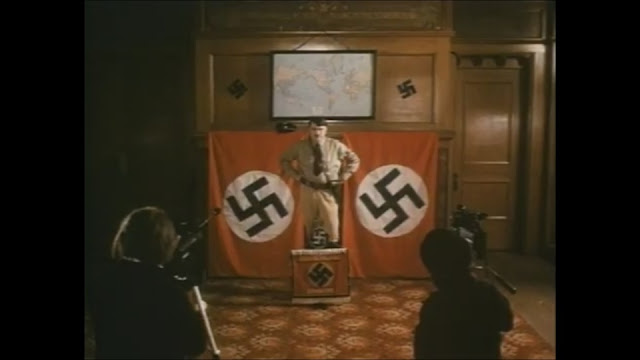 Where the movie gets weird is first in its general concept, which it lives up to in spades. It's refreshing to see a high concept title being brought to life so honestly. There are also werewolves, incest, killer dwarves, and nazis, led by a certain familiar face...! Then there's the love story, which has to be seen to be believed! It's a mix of normal and sweet, mixed together with potentially eyebrow raising elements. 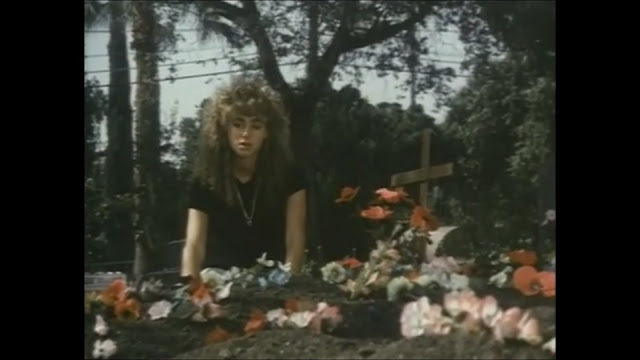 I can't praise the soundtrack enough. There are various songs throughout the movie, all of them good, from the opening concert, to the love song (which skirts the line between heartwarming and creepy). Shake it Out, Baby is a great mix of contemporary 80s rock, while also sounding like a great 60s throwback. It has a classic timeless feel in a way. Na Na Na is a simple fun track. The instrumental that plays during the revenge is a cool electronic piece, and feels straight out of a video game (I mean that in the best way possible!). 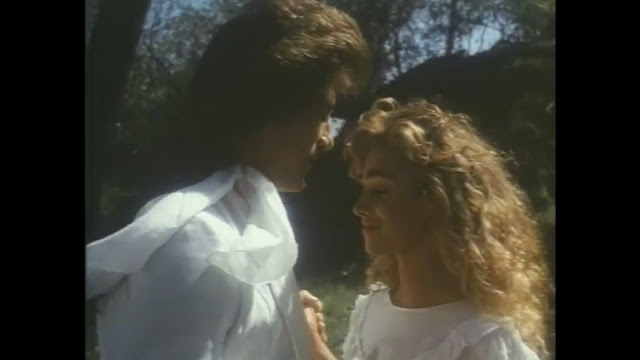 Street Angel is a pretty standard rock song, coming in fairly late. The undead revival song has a few different variations throughout, with the main one recited at the end being a badass theme that really sells the premise. And lastly, Cassie is another great. It's a sweet tune, with a ballad-y feel. I honestly think Shake it Out, Baby and Cassie could have been legit bonafide hits if they were ever given a chance on the chart! 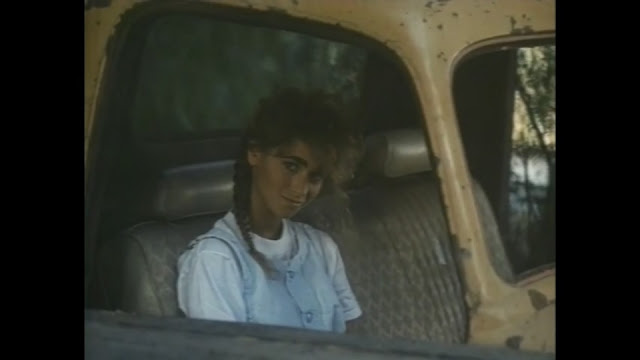 The acting in Hard Rock Zombies is pretty over-the-top, and some performances work better than others. E.J. Curcio and Jessica Coe are good in their roles, having nice chemistry (questionable love story aside). Ted Wells as band manager Ron is fun and probably one of my favourite parts of the movie. He's a great straight man, and he's able to deliver hilarious lines like "They're gonna tie her up and let all the ghouls screw her to death! Is that what you want? Ghouls you created screwing her to death?" in total seriousness, without cracking up!
Apparently Ted Wells was a 'serious actor' and so was not pleased to be working on a movie called Hard Rock Zombies. I really hope that he thinks differently now, because 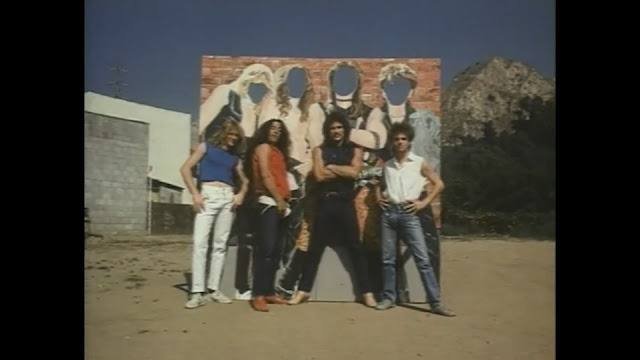 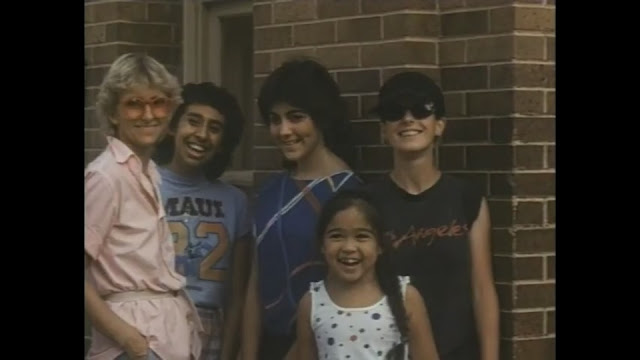 Other performances are weaker, and you can tell a lot of the cast were probably amateurs, many with just this one film to their name. I'd say no-one does terribly, or at least, not without trying. I particularly enjoyed the extras we see in one scene! You can tell the locals in the Na Na Na number were actual townspeople with genuine reactions, and it's cool to see. Especially when compared to the hostile and insular characters in the movie. 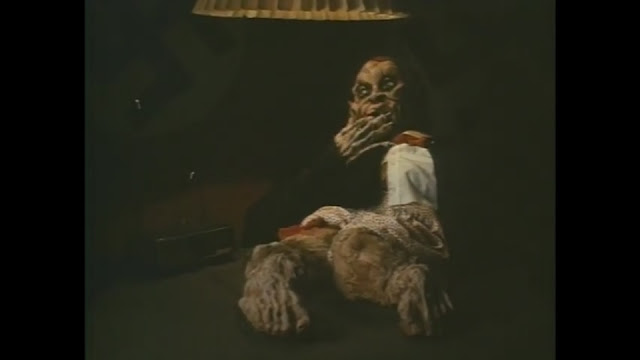 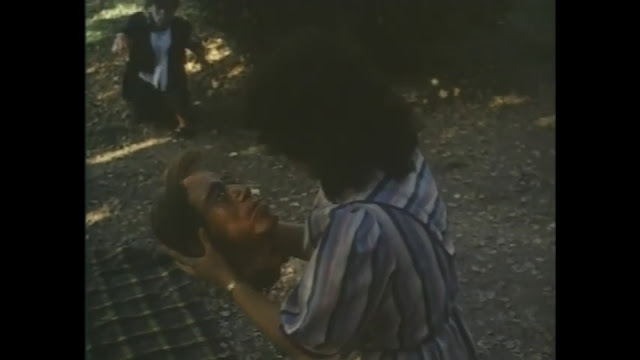 The effects are designed by industry legend John Carl Buechler, and they're neat! Cheaper than his usual designs, but often convincing, or at least creative. We get a good variety of violence and make-up, with decapitations, stabbings, and other creative demises. Most of it's implied, but what we do get is enjoyable enough. Standouts include the zombie eating himself (that last shot is great!), and the zombie make-up is good, especially for the main band. 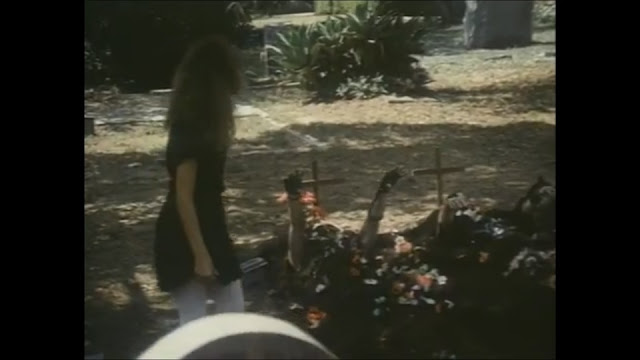 Hard Rock Zombies isn't for everyone, but for those who enjoy cheesiness, schlock, 'so bad they're good' movies, or appreciate such things with sincerity, this is the movie for you! It's a great way to spend an afternoon, and if nothing else you'll get to hear some nice tunes. And really, isn't that the greatest victory a movie like Hard Rock Zombies could walk away with?...
Posted by Chris Hewson at 7:50 AM