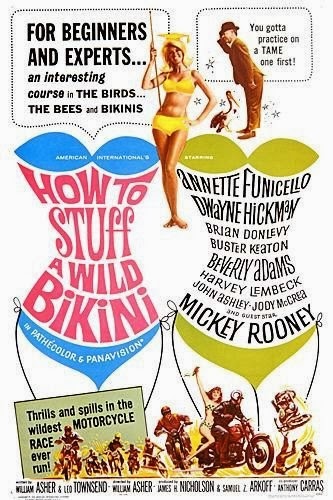 Bikini beach party movies were big in the 60's, and it's cool that this particular series actually bothered to have fun, entertaining, and varied (from what I've read) plots, rather than just have samey stories, with each one be just of people at a beach in bikinis. If this entry is any indication, these films aren't one-note.

So, this is the sixth in a seven film series that tended to star Frankie Avalon and Annette Funicello as couple Frankie (HOW ORIGINAL!) and Dee Dee, as well as other characters, including a goofy biker gang led by Eric von Zipper. How to Stuff a Wild Bikini has Frankie out in South East Asia on navy reserves, where he's banging every native girl with a pulse, yet doesn't want his girlfriend Dee Dee cheating on him, so he goes to a witchdoctor Bwana (Buster Keaton), to get a spell done to make sure that no man goes near Dee Dee. The spell takes the form of Cassandra (Beverly Adams), a beautiful, yet clumsy bombshell, who's meant to distract all men from Dee Dee. The plan would work, if not for ad exec Peachy (Mickey Rooney) discovering her and hiring her for his new girl next door ad image. A worker for the company, Ricky (Dwayne Hickman) is attracted to Dee Dee, and the two hit it off really well.

Meanwhile, biker Eric von Zipper (Harvey Lembeck) falls for Cassandra, and as the two team up, they and Ricky and Dee Dee are in for a motorcycle race to decide the girl and boy next door...

This is definitely an entertaining sit! It's funny, is a cool musical, and most importantly, *ahem*, let me compose myself...BABES IN BIKINIS!

The acting is all good. My favourites were Annette Funicello and Alberta Nelson as biker lady Pus. Buster Keaton is amusing as witchdoctor Bwana, and the cameo at the end with Bwana's daughter is funny too. At least, it is until the nose twitch.

The musical numbers are all fine. The songs are catchy and memorable, but most are short. Not cripplingly short, but still not long enough. Either way, I had songs like American Boy, Healthy Girl, and Greatest on Mad Avenue in my head for a while! Still do as of writing this in fact!

The characters are all fine, although Cassandra not only doesn't get much character, but she all but vanishes from the movie at the halfway point, and pretty much only comes back when the race comes. If she was around for the whole movie, I'm sure her character would fare better, but as it stands, she's just a clumsy bikini broad who exists.

As for the character of Frankie, he's an asshole! He has no issues cheating on his girlfriend, but he's so paranoid that she might cheat on him that he has a magical spell performed to keep her away from all men.

Given that I know next to nothing about the previous entries in this series, as far as I know, this movie's treatment of the Frankie character could be a character assassination, or maybe not, since practically every previous entry in this serious was about Frankie trying to win Dee Dee back, so I guess he was always a dick.

As for Frankie Avalon's appearance in the movie, he's only present for about six minutes total. Some sources say that it's because he asked for more money than the producers were willing to pay, and thus was delegated to what basically amounts to an extended cameo, but it's more likely because he was working on another movie at the same time as this, Sergeant Deadhead. Keeping in tune with the latter possibility is in the ending credits, where they say "The producers of this film wish to extend a special thank you to Frankie Avalon". That doesn't really sound like the kind of thing producers would say to an actor they've put on punishment duty.

The plot to How to Stuff a Wild Bikini is fun, although the ending sucks.


This movie's ending sucks! Dee Dee ultimately breaks things off with Ricky, Frankie comes back, and the two stay together. That's bull. She should have ended up with Ricky! Frankie's a cheating dickhead! The only reason Dee Dee and Ricky don't get together by the end is because they had to have the status quo back for the next movie...buuut neither of them are in the next (and final) movie. I guess then that they just wanted fans of the series to be happy, even though Frankie'll probably end up going all "You don't like my music?" on Dee Dee at some point in their lives.

Also, Ricky ends up with Cassandra at the end, but when they get to his place, she disappears. Uh, why? That was specifically what Bwana said he wouldn't make happen! I guess Ricky ain't gettin' a happily ever after then.


There are a couple of funny and stupid things about the movie, respectively. The first is the choice of food Dee Dee and Ricky have on their date-KFC!* Who eats KFC on a date? And with a massive bucket each? I couldn't eat a whole bucket like that of KFC, and I'm the type who strips a whole pizza down like a piranha for myself. Also, there are a couple of terrible green screens while characters are simply walking at a beach. And it's painfully obvious that they're only making motions, and not actually walking.

*KFC showed up in plenty of B-movie type flicks, because Colonel Sanders was apparently a big fan, and was willing to fund many such movies as long as they has product placement of KFC in them. I can't complain, KFC is worth product plamenting!...

So, yeah,  despite the sucky ending, I absolutely recommend How to Stuff a Wild Bikini! It's great fun!
Posted by Chris Hewson at 9:13 AM